▶ Many say outlook on life, work practices will change

▶ 37% feel airport should open only when vaccine is available

▶ More than a third will change the way they work

Nearly half the Maltese say they are “likely” to change their outlook on life after the COVID-19 pandemic, and the vast majority want the airport to remain shut, despite the devastating economic consequences, a survey commissioned by Times of Malta has shown.

But 78% expect the government to provide more financial assistance to businesses while more than a third of those in employment say that the restrictions will force them to change the way they work, according to the survey that reflects a country fast adapting to a new reality.

The study was carried out by EMCS, an advisory and market research firm, between Monday and Thursday among 524 respondents. It has a margin of error of 4.3%. 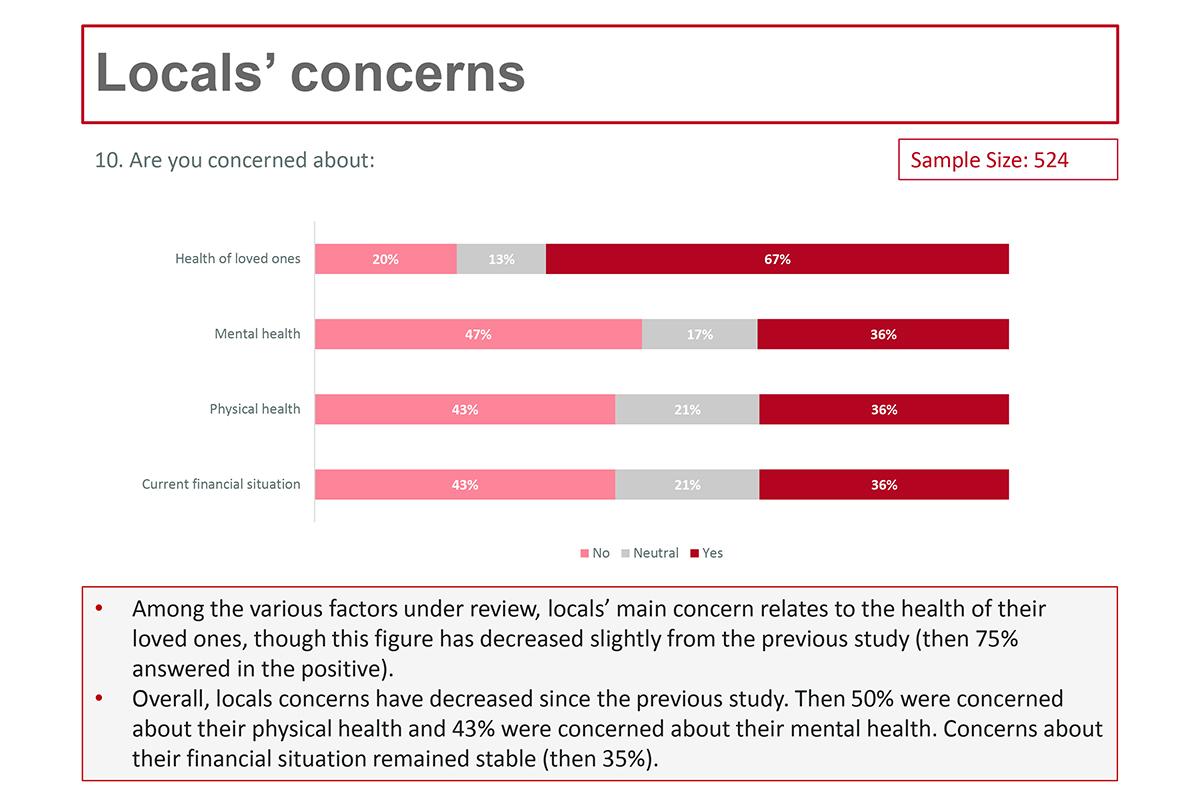 The majority – 71% – of those in employment do not fear losing their job. Eleven per cent are ‘fearful’ or ‘extremely fearful’.

Support for the government’s hand­ling of the health crisis remains overwhelmingly high, with 21% expressing ‘positive’ views and 73% feeling ‘extremely positive’.

When it comes to the economy, 36% of respondents expressed ‘positive’ views while 31% felt ‘extremely positive’. The positive perception decreased by 8% when compared with the study conducted two weeks ago and is the lowest score over a one-month period. Three-quarters of the population expect the government to come up with more financial assistance to support the economy. There was no variance when analysing responses by those who work in the private and public sector.

The survey showed the self-employed were the least positive. In the previous study those expressing a negative view with the handling of the economic situation related primarily to individuals who were currently employed.

The personal concerns have decreased since the previous study. The main concern relates to the health of loved ones, though this figure has decreased from 75% two weeks ago to 67%. 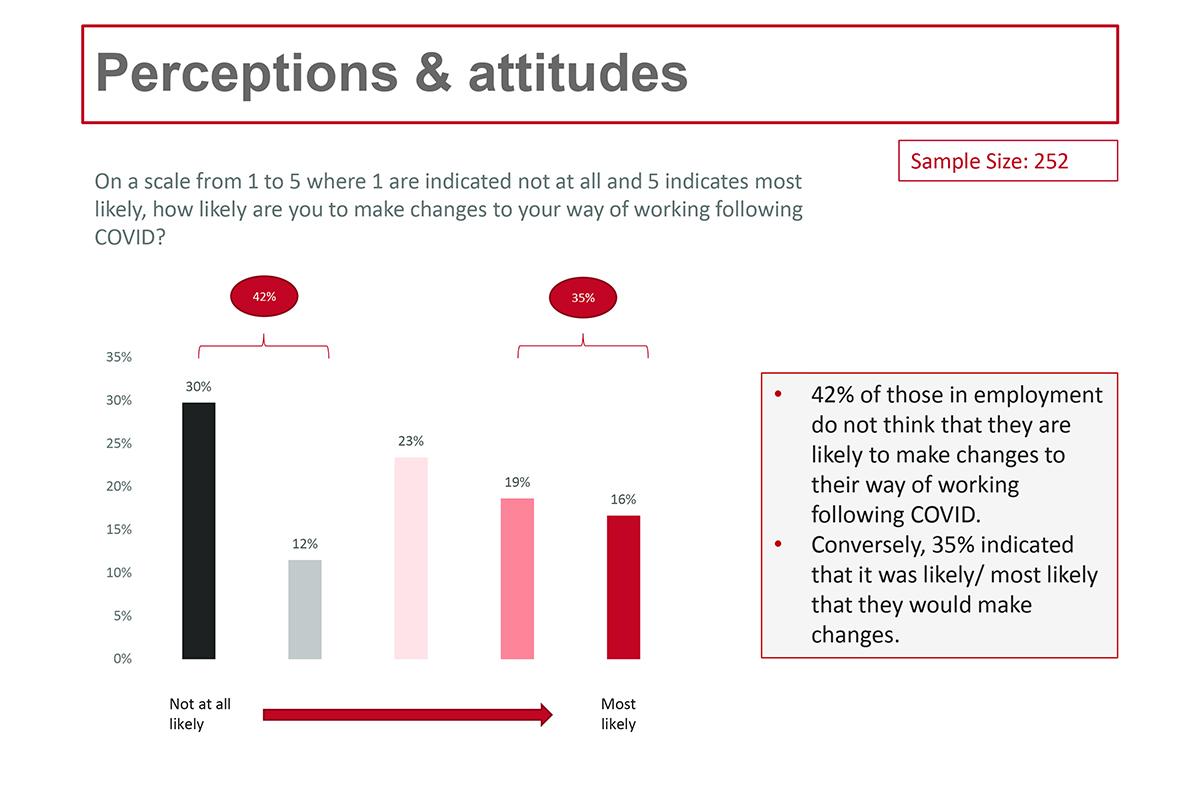 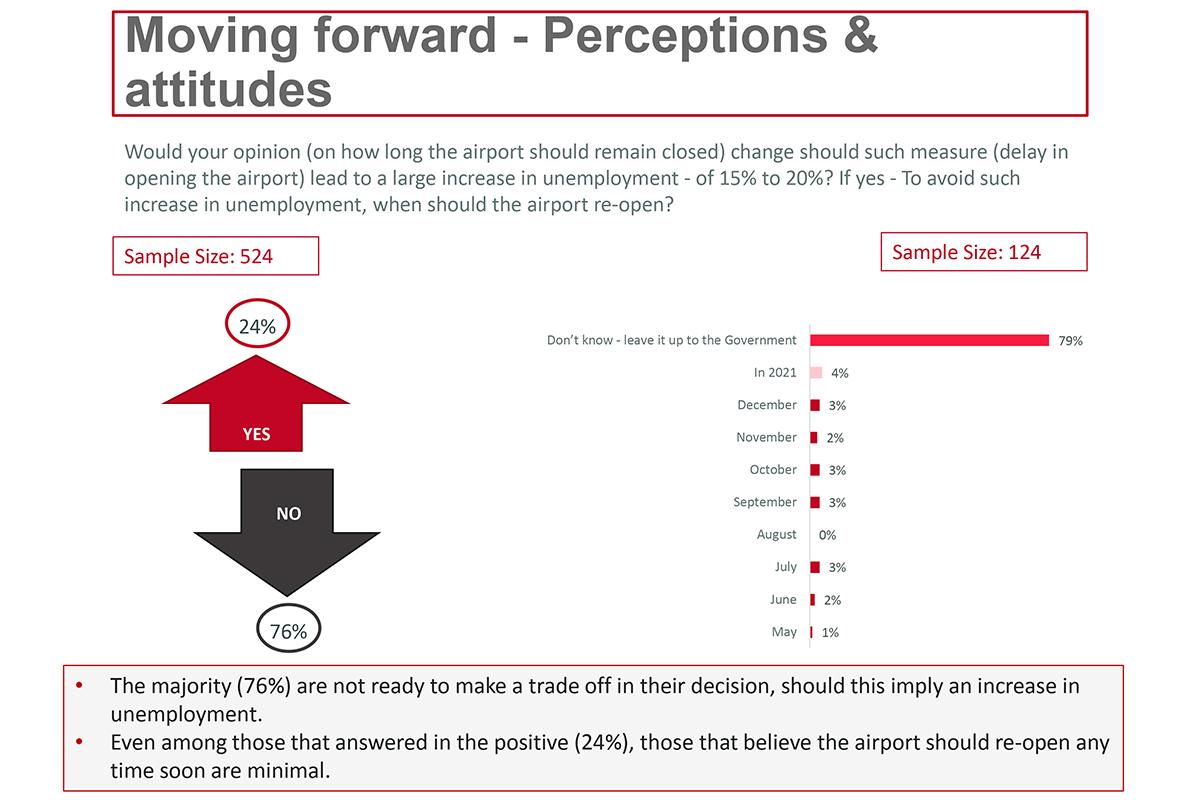 The government announced that some categories of non-essential shops will reopen as from Monday and masks must be worn inside them and on public transport. Certain health services will also resume, as will travel to Gozo.

By and large, the population agrees that schools should remain closed until the end of the current scholastic year. 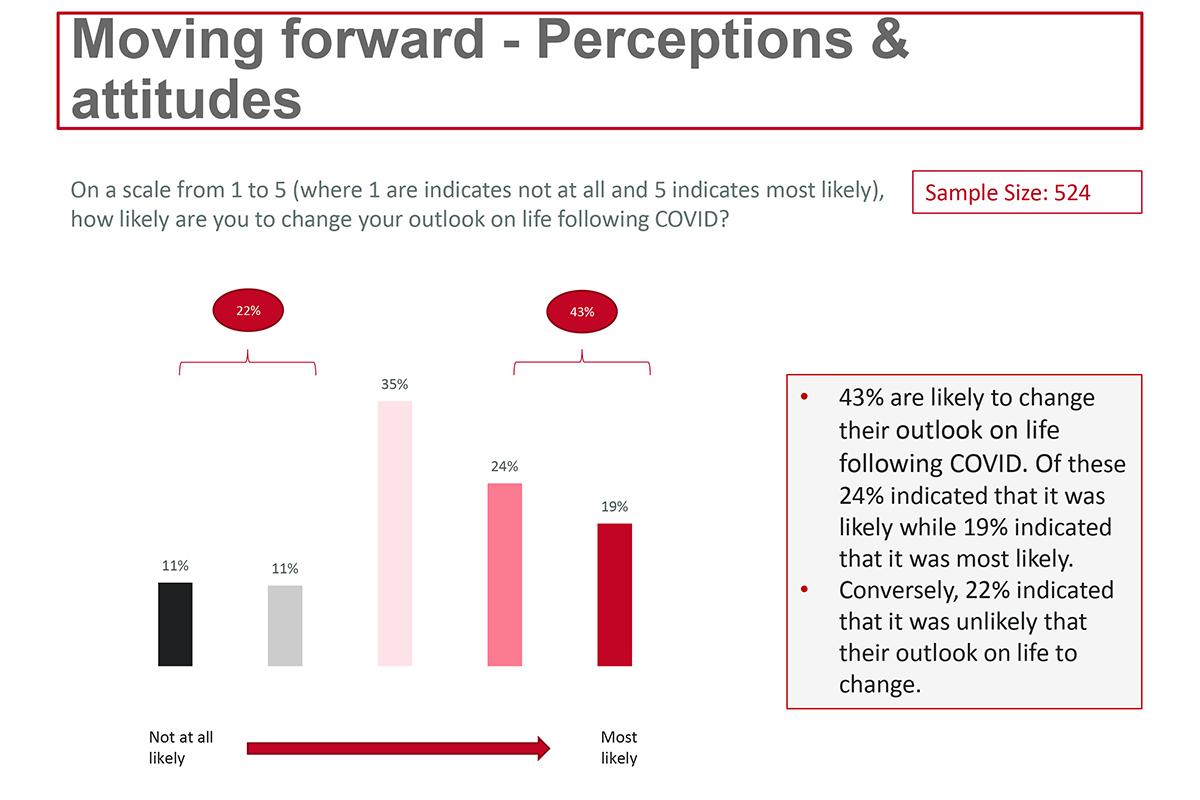 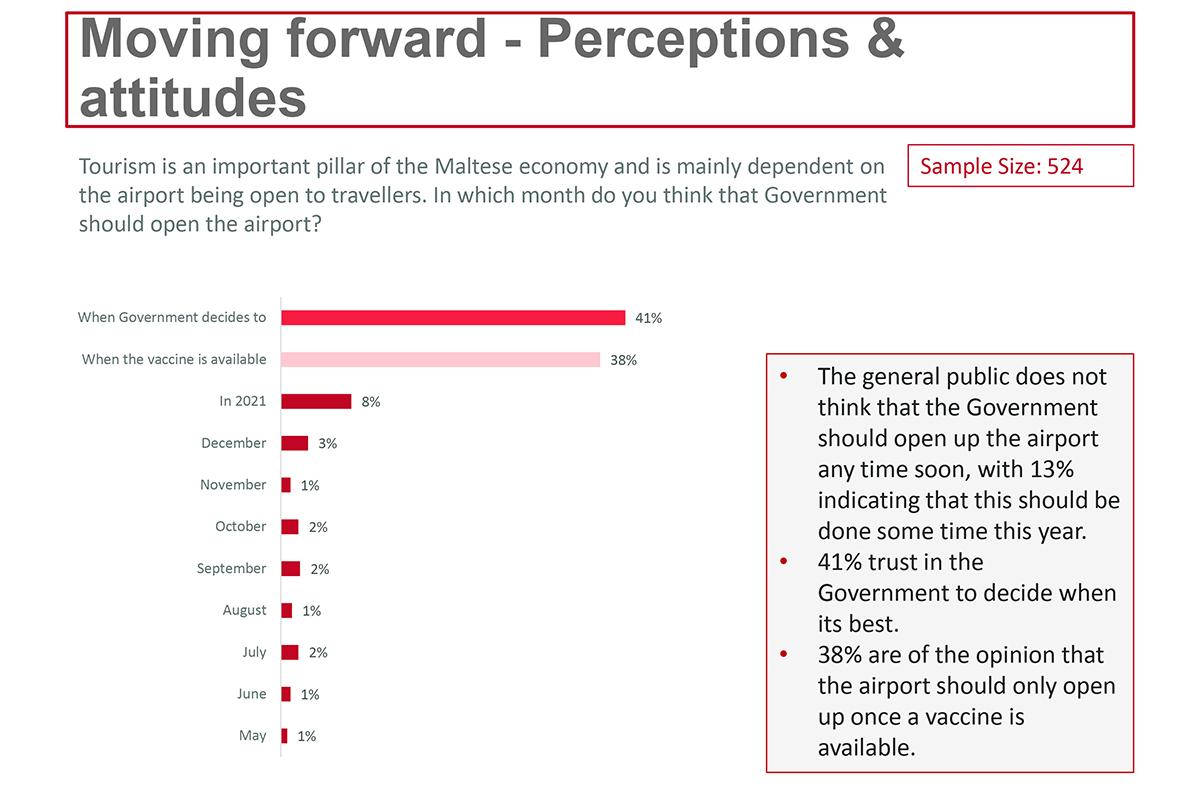 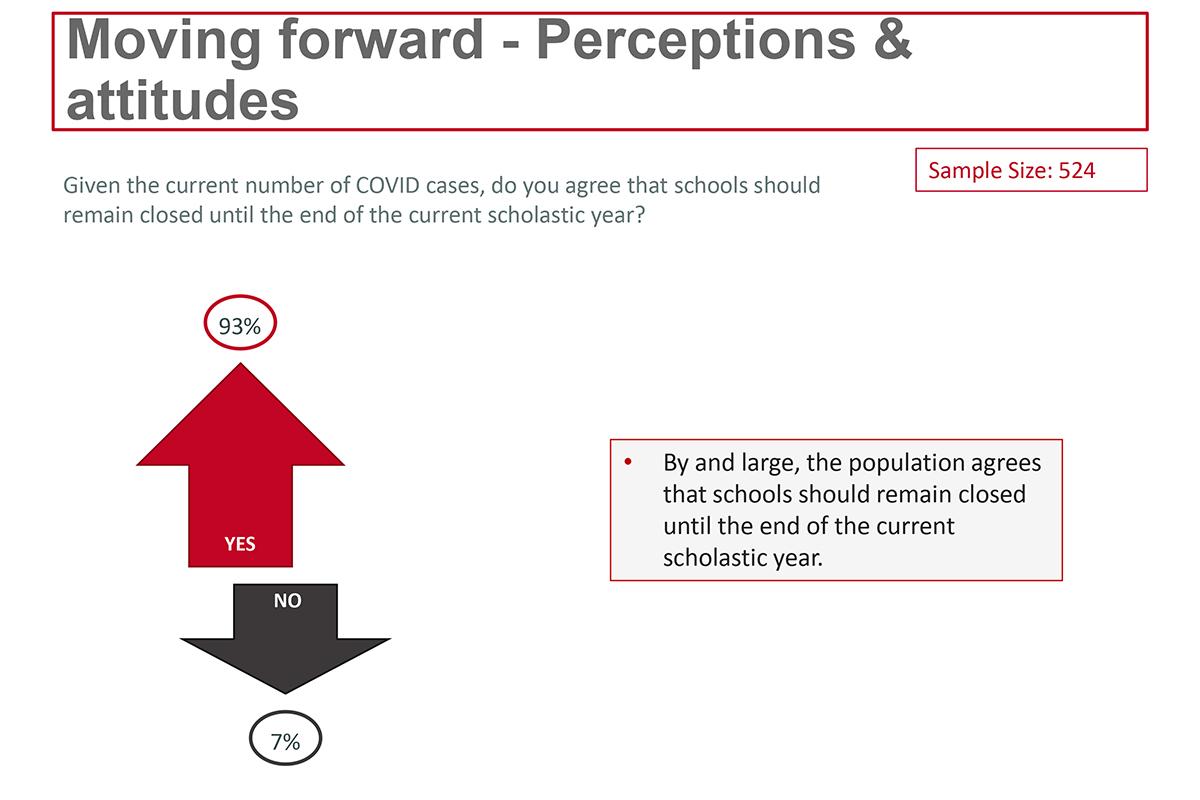 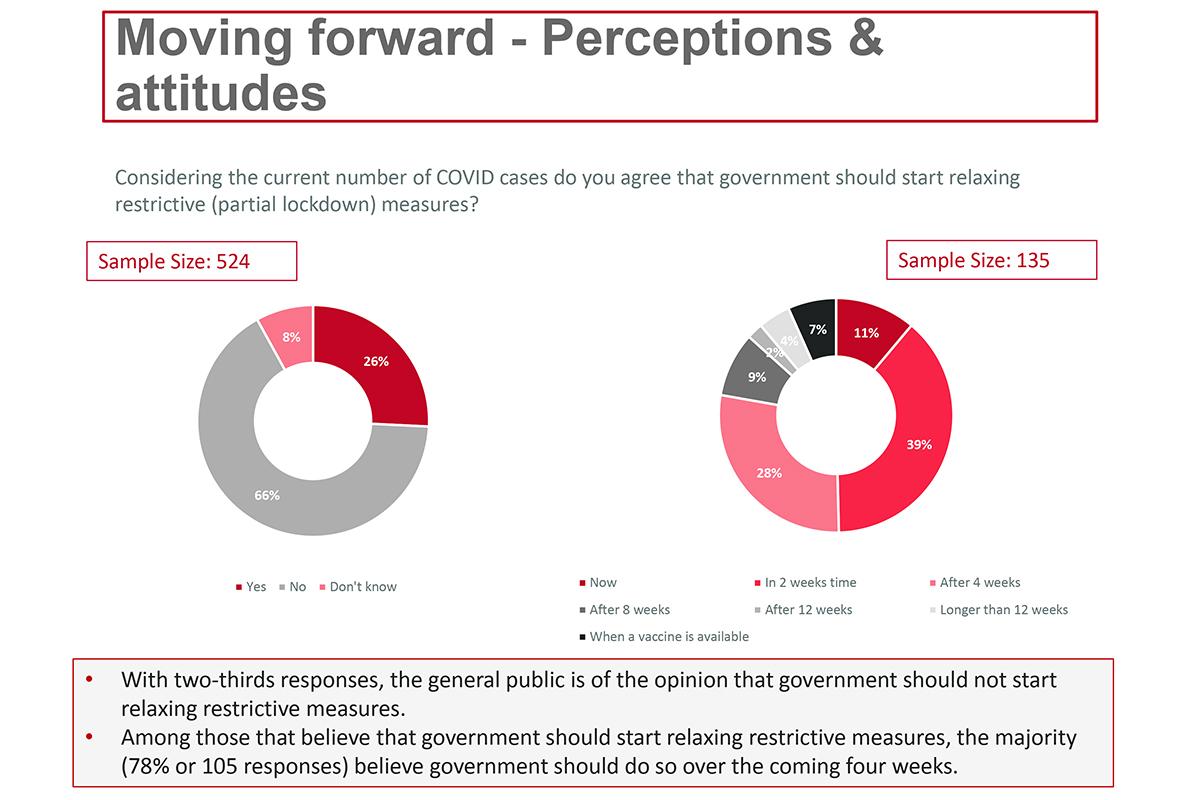 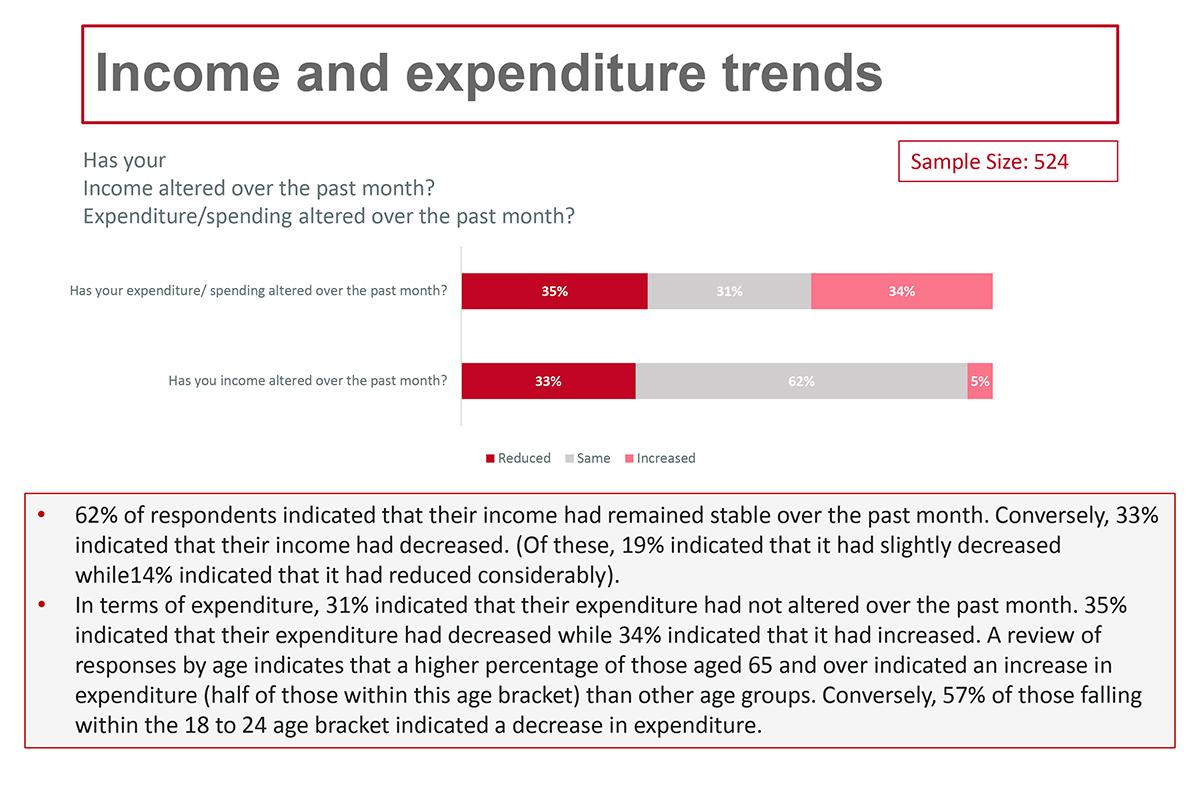 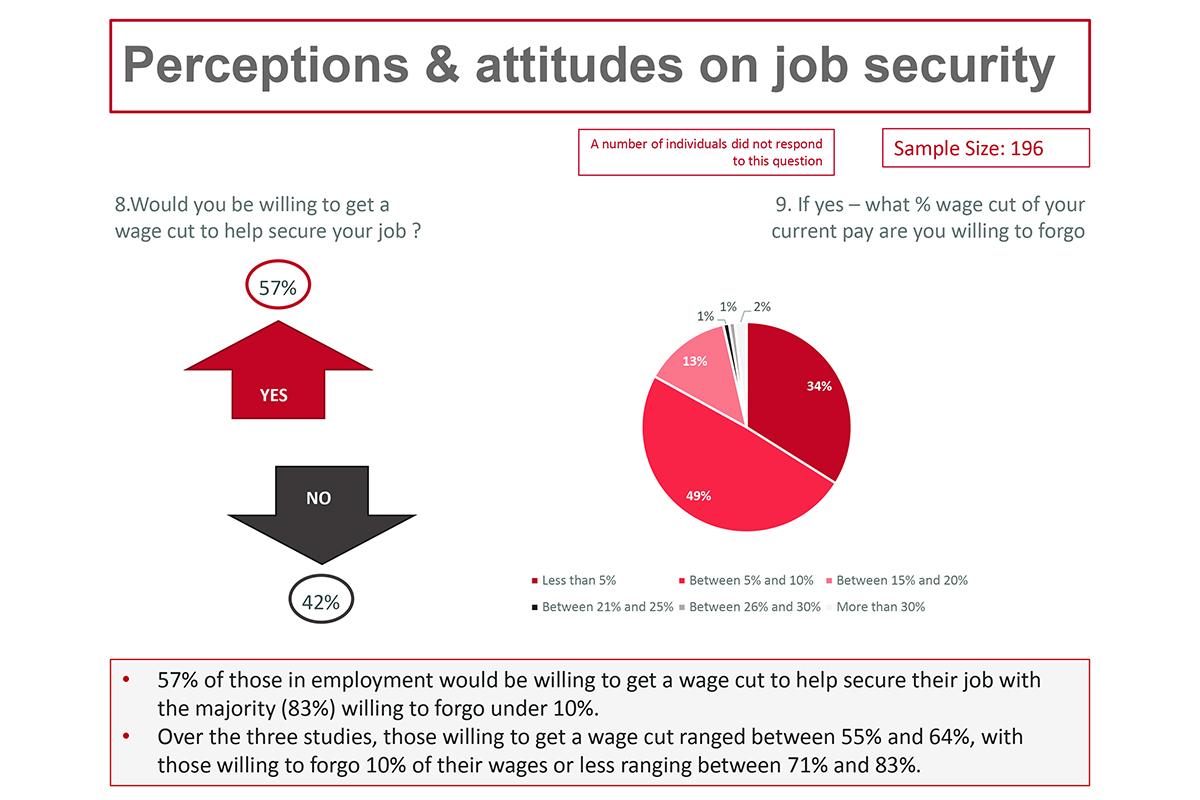 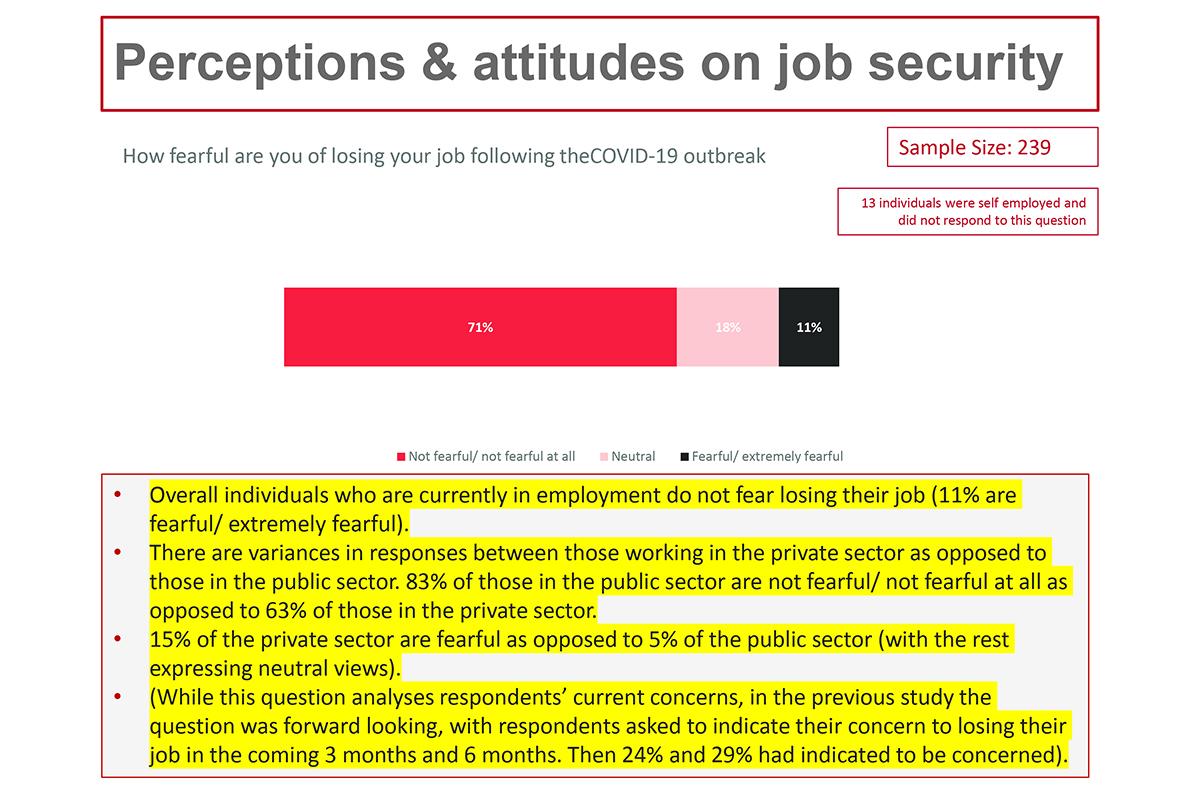 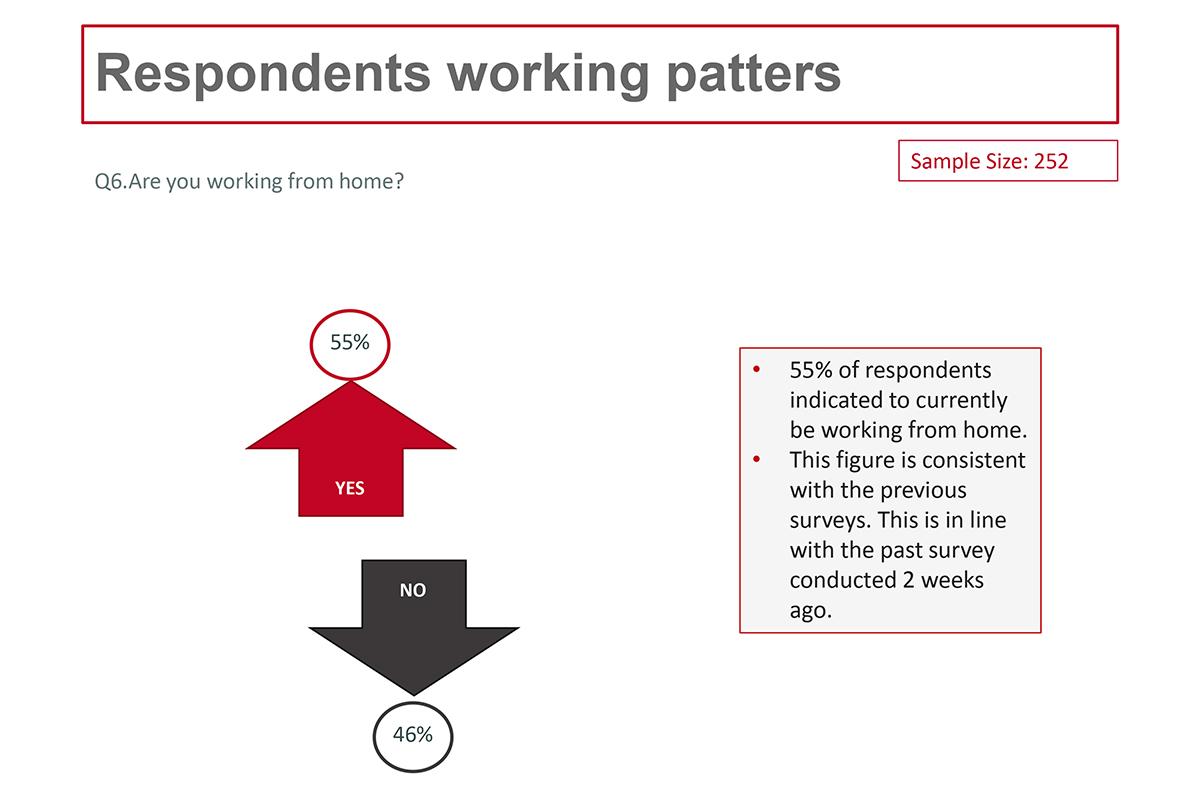 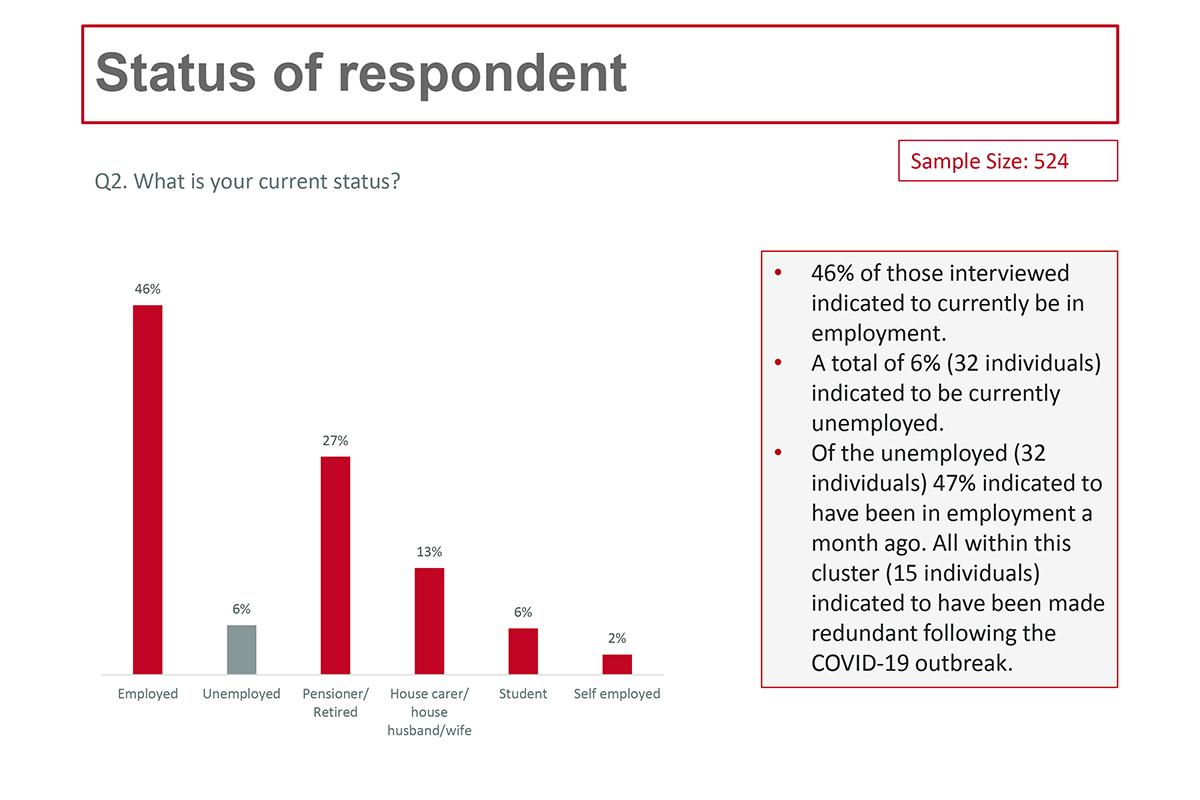 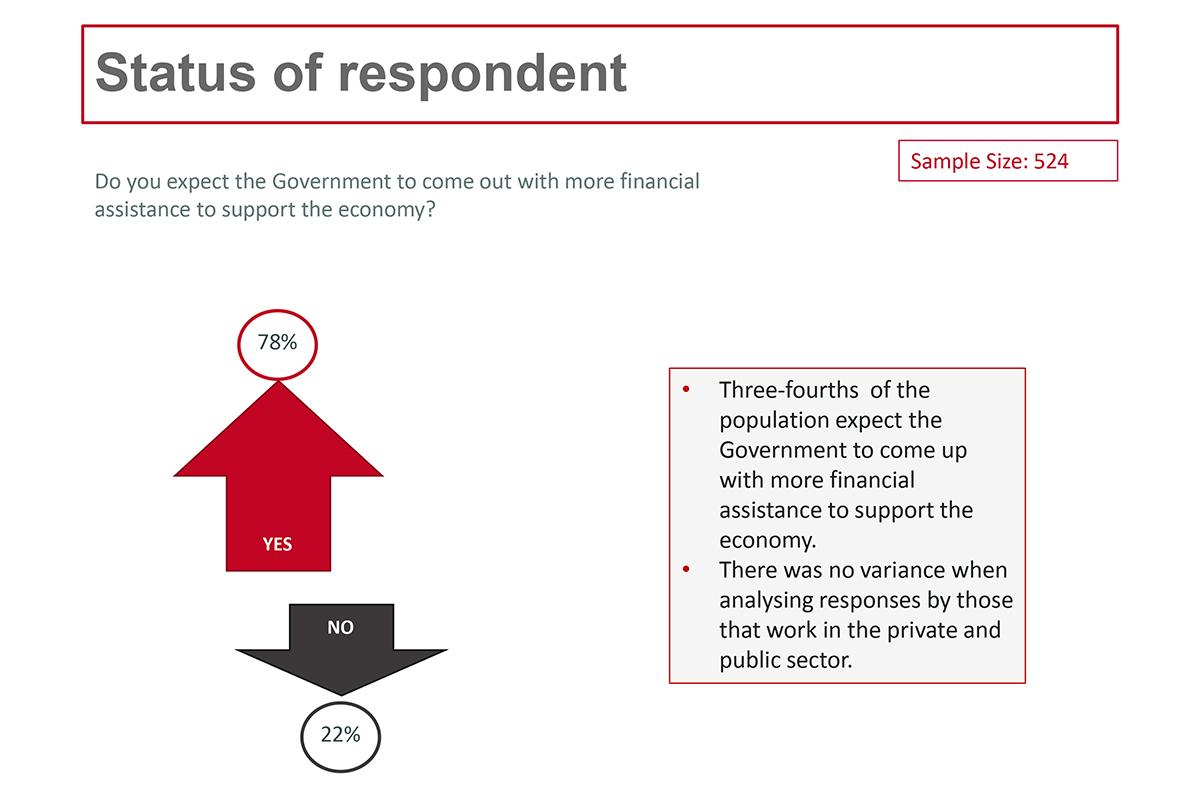 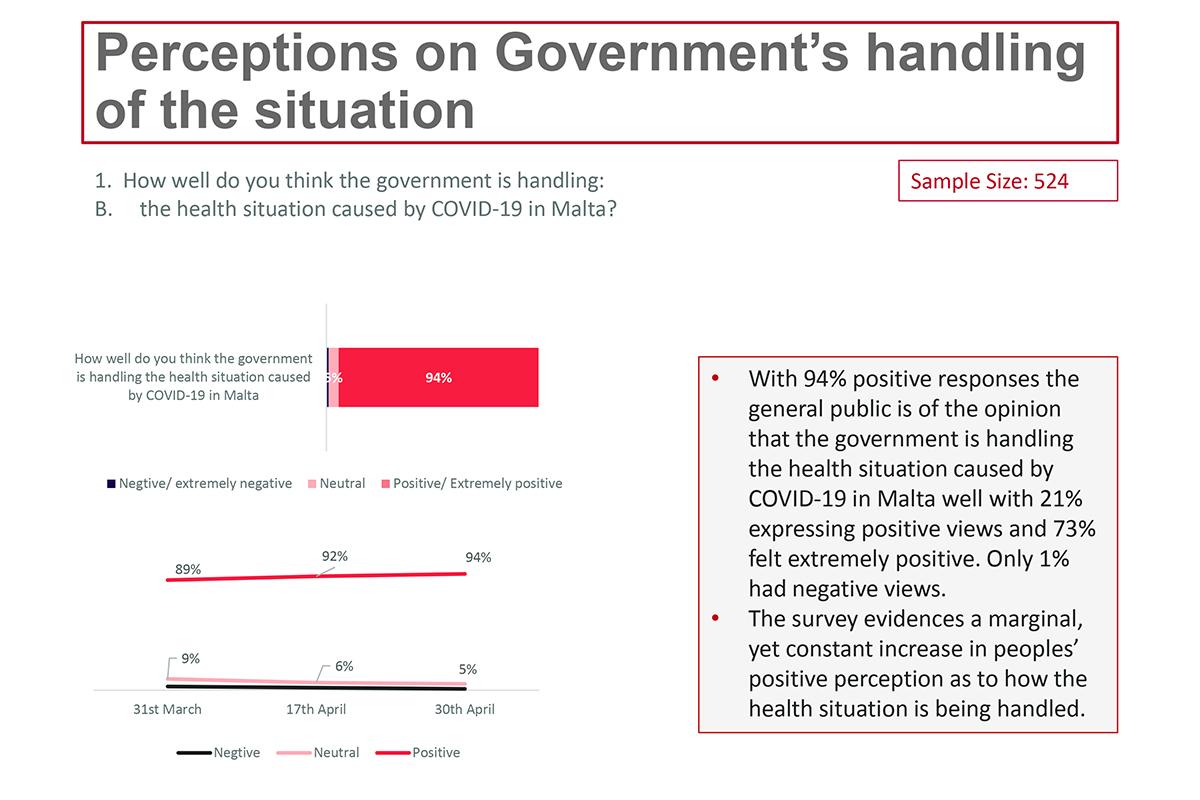 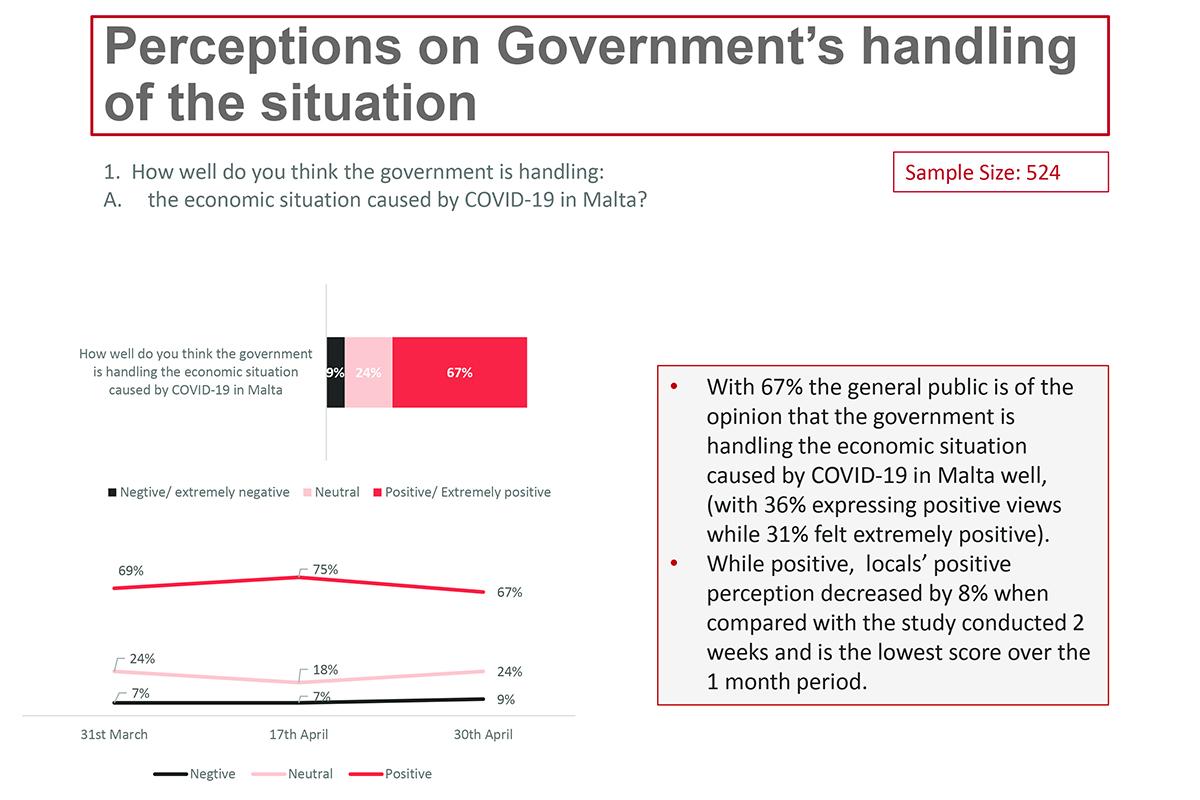 76% not ready to make trade-off over airport closure

Respondents also insist the airport should not open any time soon, with only 13% indicating that this should be done some time this year. A total of 41% trust the government to decide when best to do so while 38% believe the airport should only reopen once a vaccine is available.

Just over three-quarters (76%) are not ready to make a trade-off in their decision, even if this implies an increase in unemployment. Even among those that answered in the positive (24%), those that believe the airport should reopen any time soon are minimal.

Tourism is the biggest contributor to Malta’s GDP. Airlines have warned they are on the verge of collapse if they are grounded for much longer because of COVID-19.

‘Next four to six weeks will be critical’ 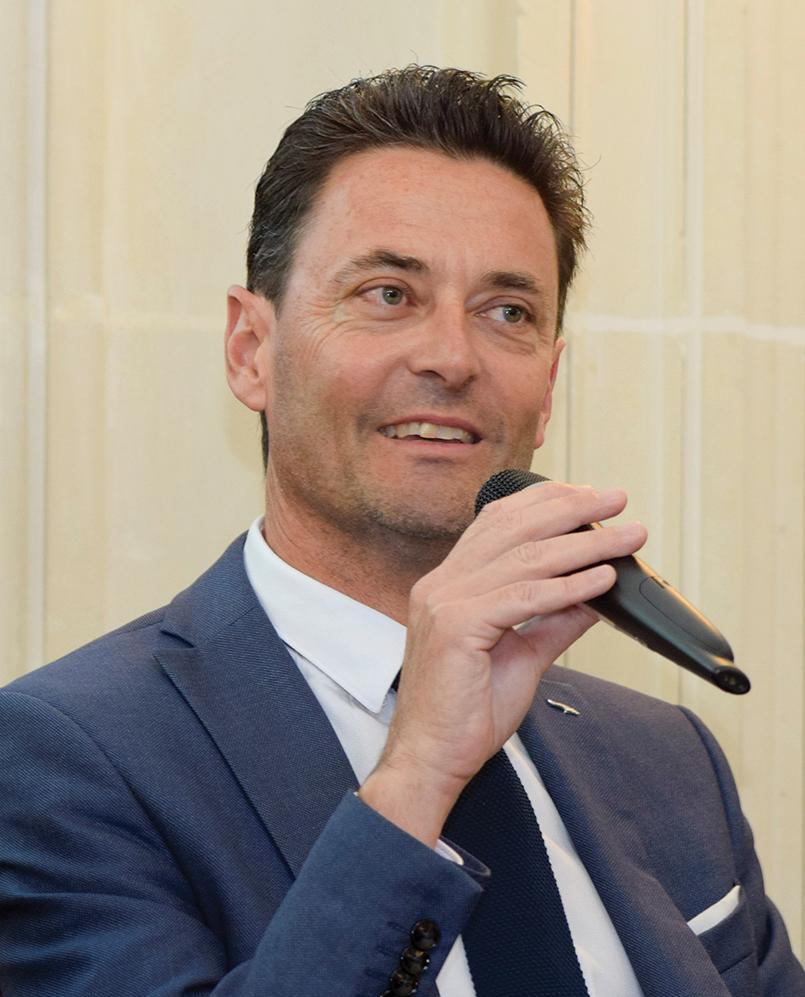 Stefano Mallia (left), a partner at EMCS, says the data gathered in the survey is interesting as it appears to show the Maltese population has started to adapt to the current situation as a kind of new norm.

Amid the small number of new COVID-19 cases, which has reduced anxieties, the survey again shows the Maltese have a very high level of confidence in the government when it comes to taking decisions on health issues.

“There is complete trust in the decisions being taken by the government even with regard to when the airport should reopen.”

Mallia said there is a very high expectation that the government should come out with more financial aid.

This in itself could be problematic because there is a limit to how much the government can continue to give without jeopardising the very fundamentals of the whole economy.

Secondly, the figures continue to point to a worry about the future within the private sector and even more pronounced within the self-employed segment.

“Having said that, especially when seeing what is happening around us in Europe, the local situation in terms of closure of businesses and unemployment seems to be under control, at least for the time being. With the gradual relaxation of the lockdown measures, what happens over the next four to six weeks will be critical.”