Activists have ended a five-hour sit-in protest inside the Auberge de Castille, where they demanded that the prime minister resign immediately, in the wake of the Daphne Caruana Galizia murder probe scandal.

The protesters, from the left-wing NGO Graffitti Movement, barged into the building at 7.15am and later other activists also blocked access into Valletta from St Paul Street.

The protesters banged drums, chanted slogans against the prime minister and called for justice at one of the side-entrances of the building.

They then walked out at noon behind a banner reading 'Resign Now'.

One of the 25 protesters was assaulted, according to another demonstrator, Julian Delia, who claimed his fellow activists "got pushed around and slammed against the wall" by the authorities.

"What was going on mainly was a war of attrition. They were trying to get us tired, getting us to leave, not allowing us to use the bathroom. They were waiting for us to dissipate," said Mr Delia.

He said activists wanted to demonstrate that "things cannot go back to normal" and that it is "not business as usual".

Protesters Julian Delia explains what went on during the five-hour sit in. Video: Jacob Borg

Those who tried to join the protest were prevented from going inside by the police.

"This is a breach of people's right to protest," Ms Vella said after banging on the Castille door at St Paul Street.

The noisy but peaceful activists made no attempt to move from the Castille entrance hallway during their protest. The Prime Minister was not in the building.

With entry into the building blocked off, other activists then staged a parallel sit-in outside the building, sitting down in the middle of the road at the top of St Paul Street outside the Castille side entrance.

Police and Armed Forces of Malta officials closed off public access to the top part of Merchants Street.

"Our aim was to interrupt business in Castille because we cannot go on pretending that everything's fine. It's not business as usual. We think have achieved that aim today," a Graffitti spokesman said. 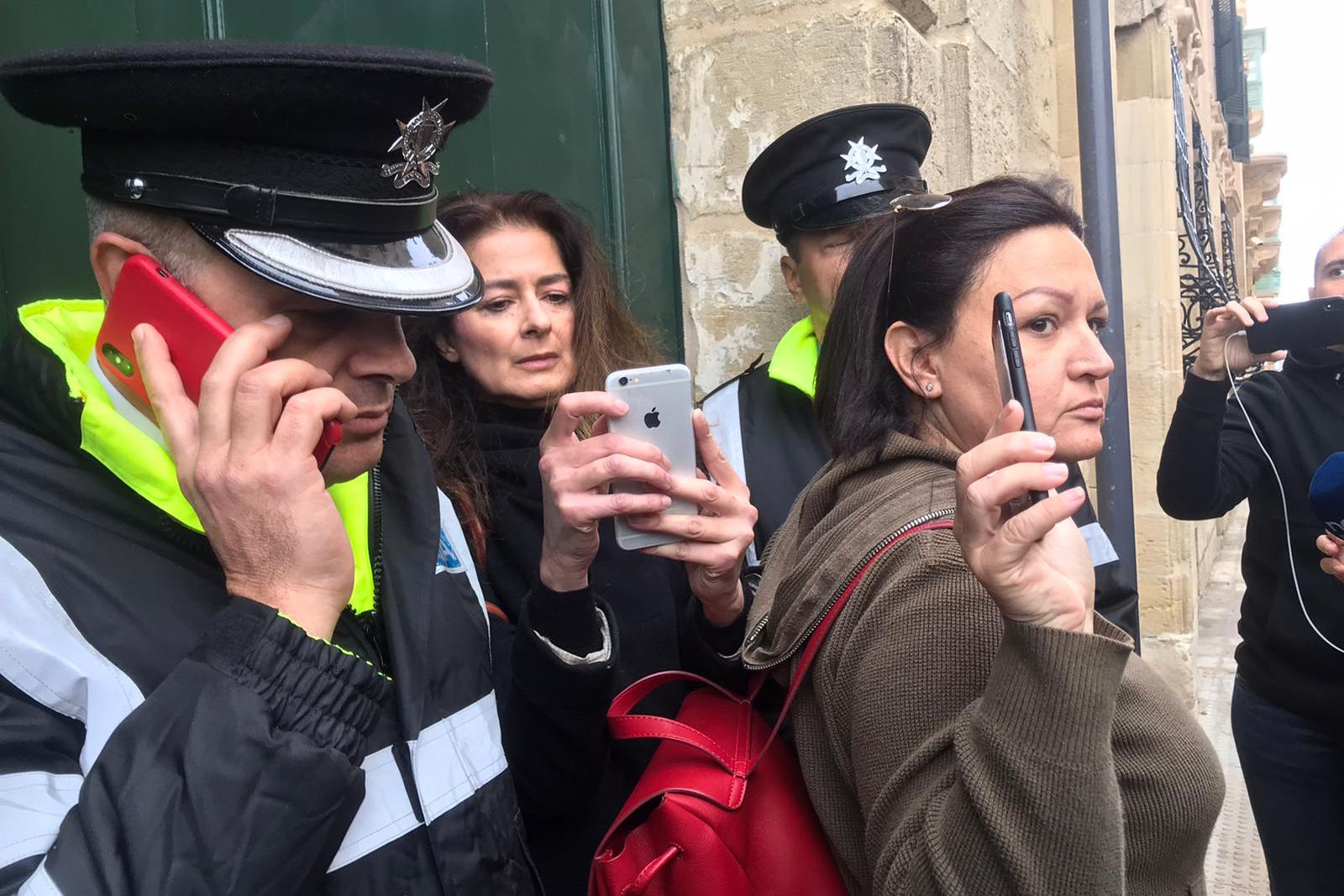 The activists said the country has now "reached the bottom".

"This is not just about corruption, but about a political murder," they said in a statement.

They said that a comprehensive investigation, rather than a cover-up, is needed and all those implicated in the current scandal need to go as well.

The leftist Graffitti group has been backing calls for the Prime Minister to step down immediately in the wake of developments in the Caruana Galizia murder investigation.

Thousands of people rallied in another protest by several civil society groups outside Castille on Sunday afternoon.

This is thought to be the first time that a political protest has been taken right into the Auberge de Castille, but the Graffitti group is no stranger to such protests, having barged into the Planning Authority offices during a meeting on the granting of a permit for a new petrol station.

What activists are demanding

In a statement, Graffitti said the activists were determined to convey one strong message: "We are asking for Muscat to tender his resignation immediately. But Muscat is not the only scourge that has plagued our country. We are occupying Castille because we are greatly concerned about the dire situation that has engulfed the democratic institutions of our country and because we feel that our country has hit rock bottom in ways unprecedented before. 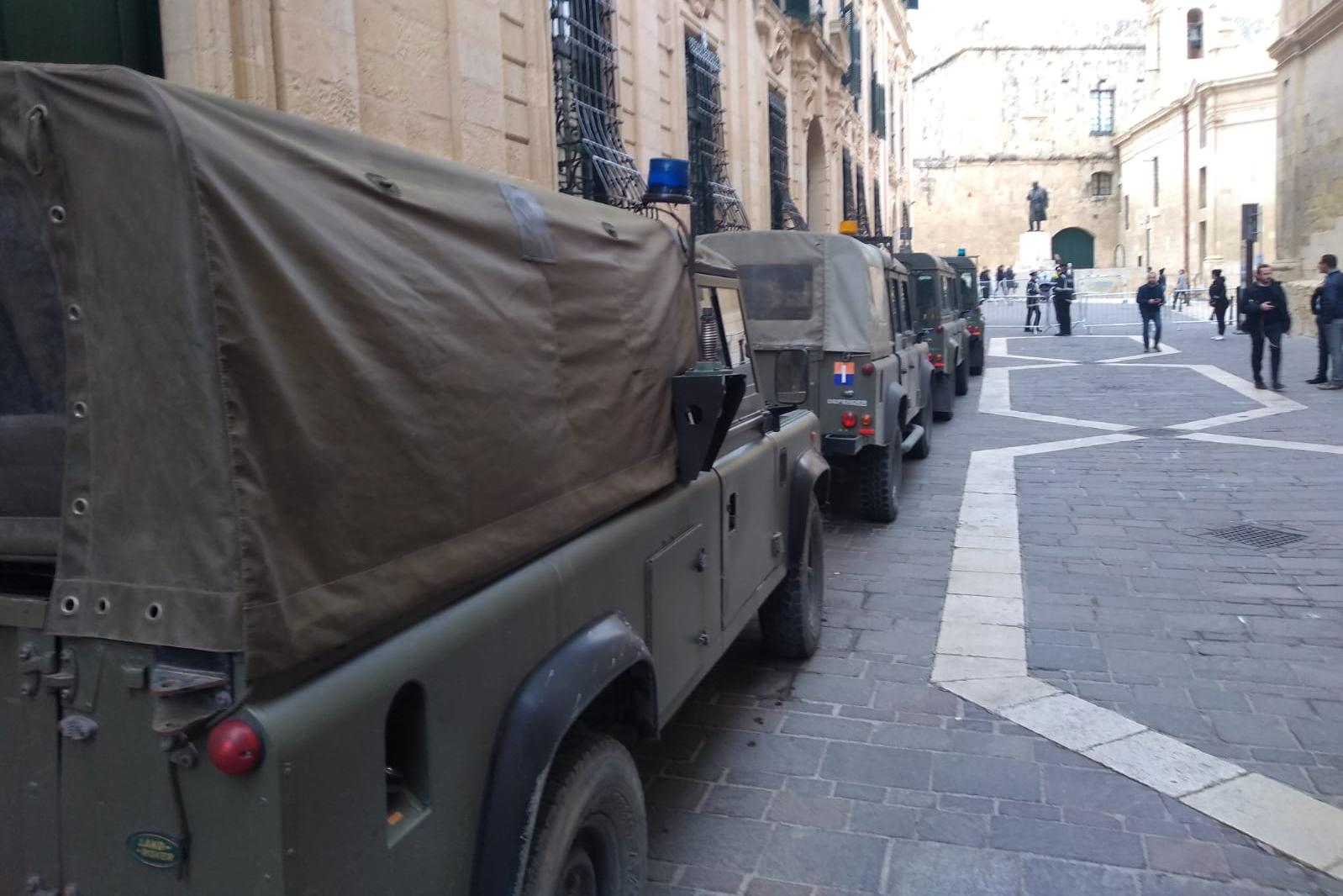 Army reinforcements were taken to the Auberge de Castille in a number of Land Rovers, seen here at the Merchants' Street entrance.

"Corruption at the highest political level is not the only disconcerting issue that we are facing as a country - we have now crossed all limits of decency and have woken up to a country which has allowed the political situation to degenerate to an extent that we now find ourselves faced with the political assassination of a journalist."

The group said Dr Muscat's pledge to resign in January "is simply not enough".

"At this point there is no alternative but for the citizens to go out in the streets and make their voices heard loud and clear. The democratic rights of citizens are not limited to casting a vote every five years," the group said.