Prime Minister Joseph Muscat said on Friday that he will “no longer comment” about the mystery company 17 Black, owned by businessman Yorgen Fenech.

“I have answered all questions. I have nothing else to add”, was Dr Muscat’s curt reply.

His chief of staff Keith Schembri in 2018 admitted in a government statement that his company had “draft business plans” with 17 Black.

According to a leaked e-mail sent by Mr Schembri’s financial advisers Nexia BT, 17 Black was set to pay up to $2 million into offshore accounts the Prime Minister’s top aide and Tourism Minister Konrad Mizzi tried to set up for their Panama companies.

Both government officials have denied prior knowledge of who owns 17 Black.

Pushed to answer whether he had quizzed Mr Schembri about 17 Black, Dr Muscat was adamant that he had already replied to all such questions.

Not a matter of curiosity

The Prime Minister has in the past said he saw no need to ask Mr Schembri out of “curiosity” what his 17 Black plans were.

He said the question was one for a magisterial inquiry to ask.

Since 2016, Mr Schembri has always maintained that the money from his offshore holdings was going to come from his business earnings before taking office.

He only volunteered that he had “draft business plans” with 17 Black in April 2018, and only after the Daphne Project revealed the e-mail link between the Dubai company and his Panama company. 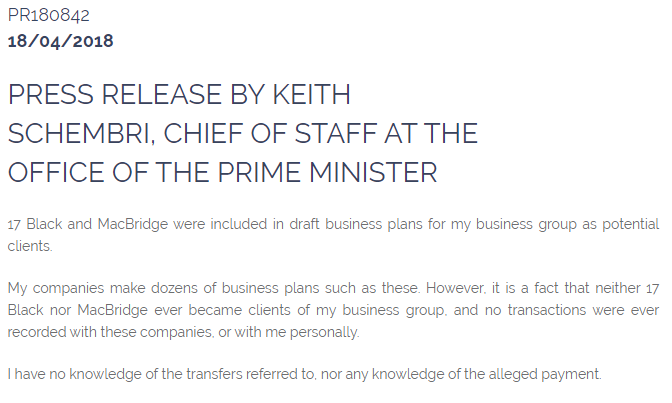 When power station investor Yorgen Fenech’s link to 17 Black was first exposed by Times of Malta and Reuters, Dr Muscat pledged to resign if any wrongdoing on his part was found.