Thousands of people lined the main streets of Gozo and the Ta’ Pinu square on Saturday to greet the first pope to visit the island in 32 years. 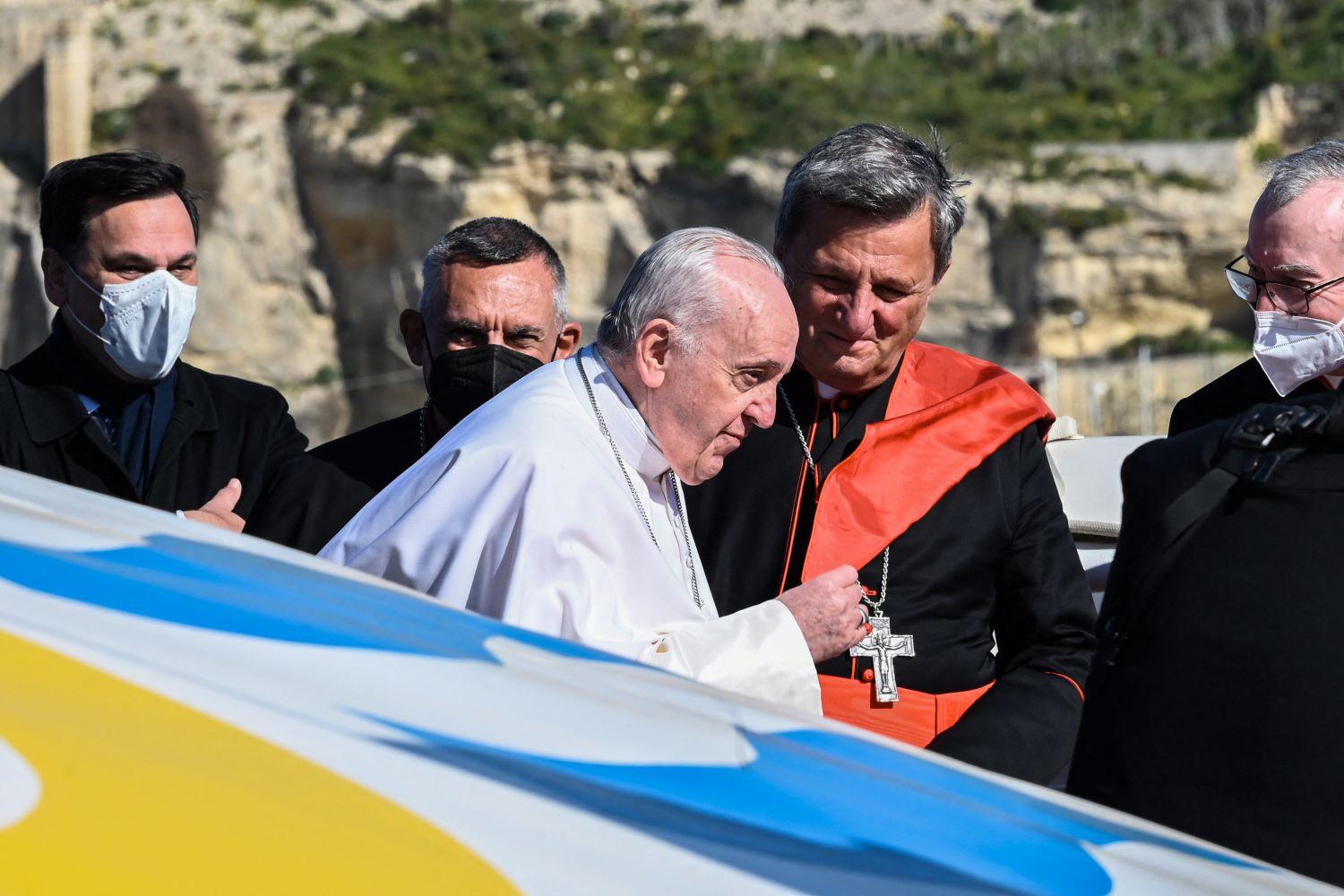 Following an hour's ride on the catamaran, Francis was driven in his official car all the way to Victoria, before heading to Ta’ Pinu, passing through cheering crowds. 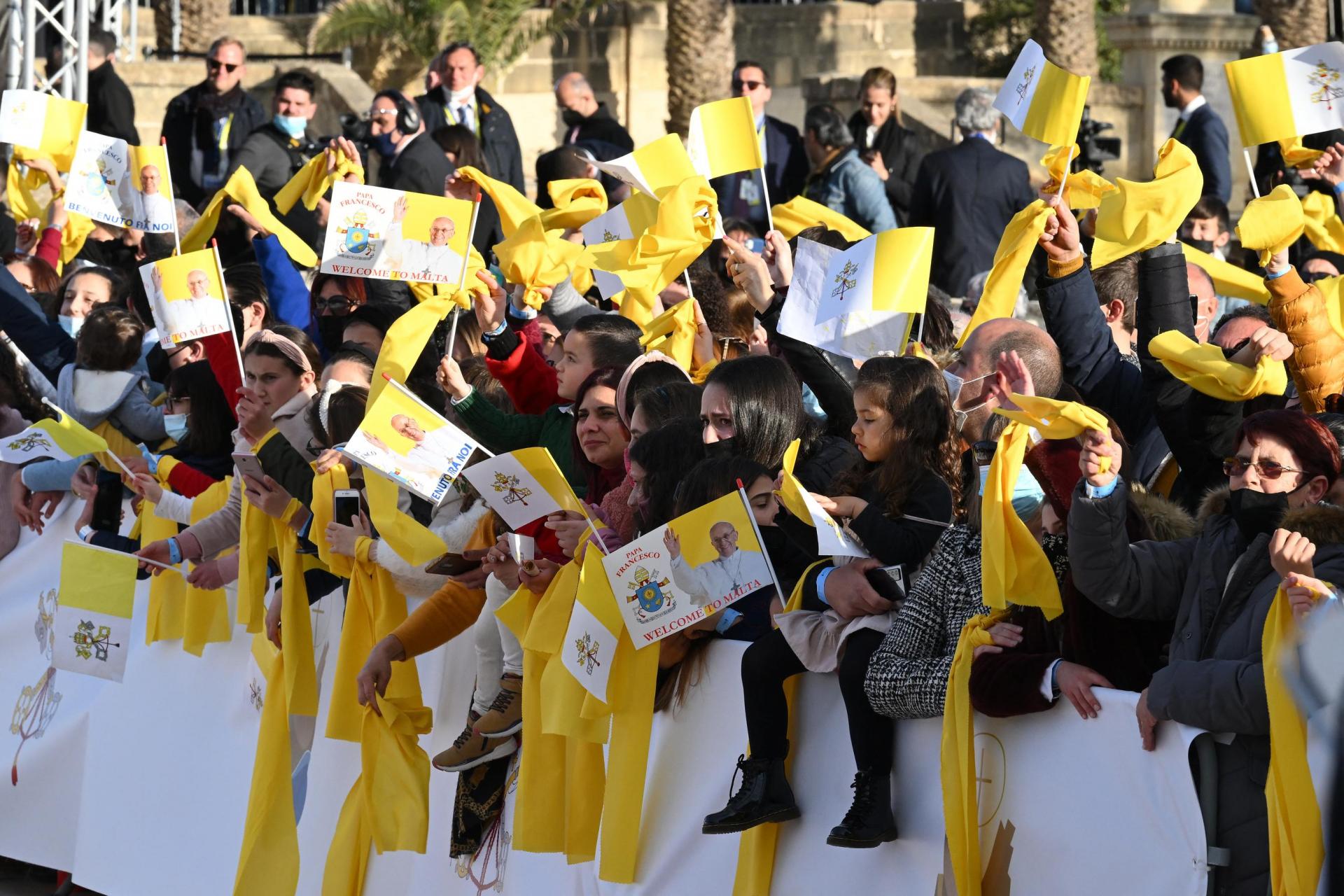 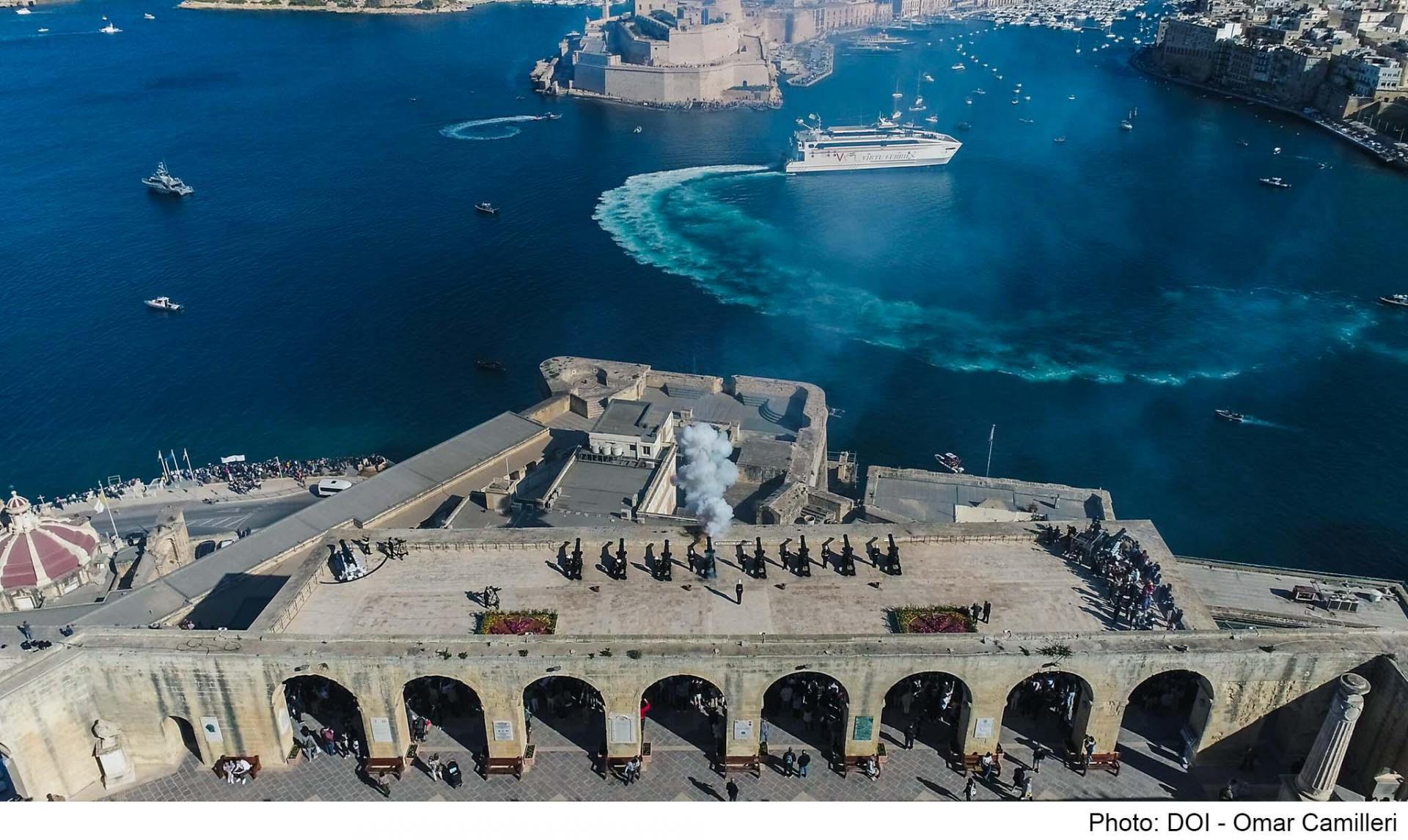 Before meeting with the faithful, including several people with disabilities inside the basilica, the Pope spent a few minutes praying in front of the Ta' Pinu portrait.

In the chapel he recited three Hail Marys, heeding what many believe was the blessed virgin’s own request. In 1883, a peasant woman from Għarb claimed to have heard the Virgin Mary calling her inside that same chapel and asking her to recite the prayer.

To this day, thousands of pilgrims repeat that prayer, and so did the Pope.

A prayer meeting followed shortly outside the basilica. The crowds went silent as the Pope read the homily and spoke about the rich history of the Maltese church. 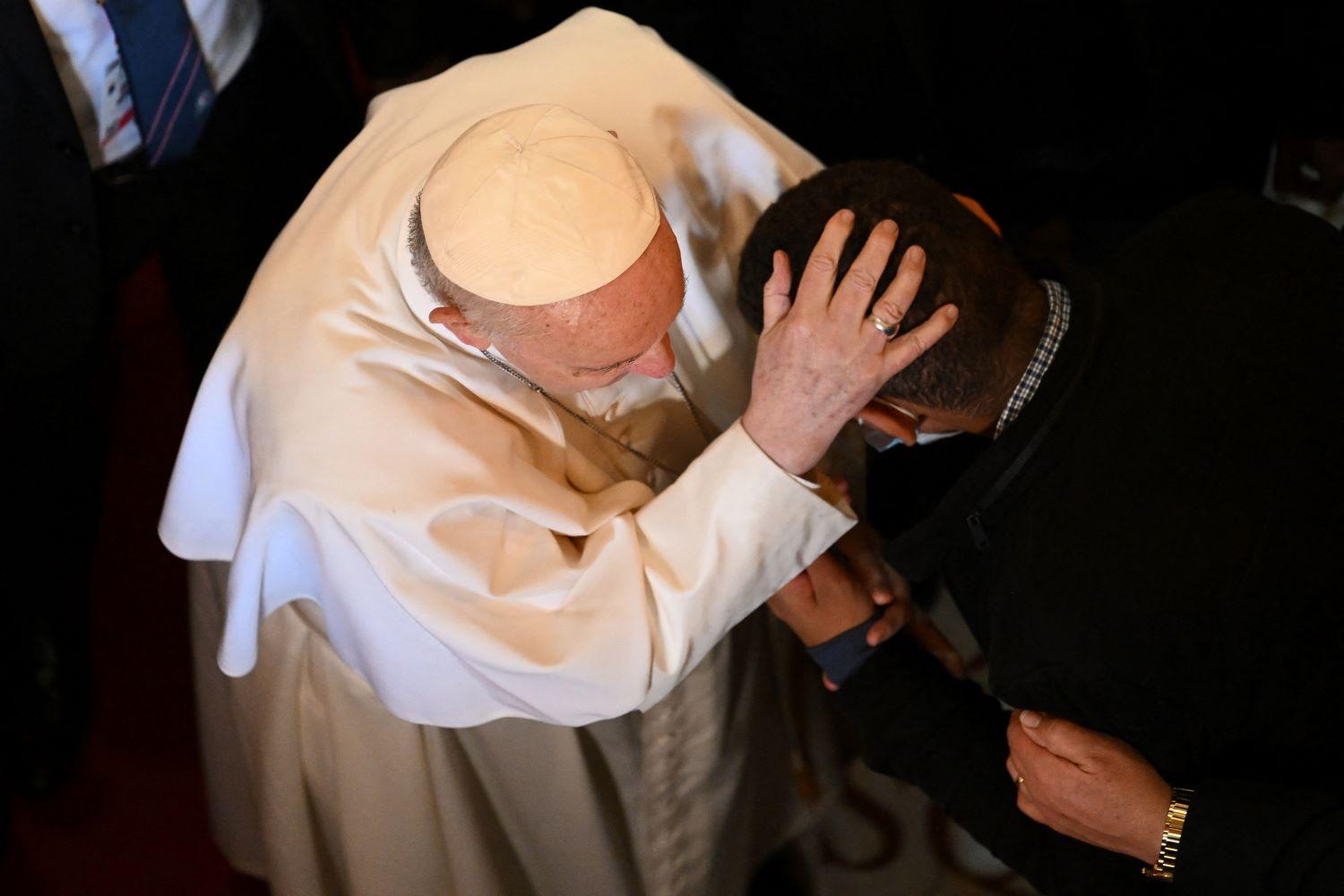 Pope Francis blesses a man after praying in the basilica's chapel. Photo: AFP

“We are very happy that you have come among us as a pilgrim, like us. Most of us come here frequently, often when we are suffering,” he told him.

“Help us pray for the courage to welcome among us those who are fleeing war and famine, as they seek refuge on our island. May we never treat anyone of these people as foreigners.”

He also touched on the scourge of overdevelopment: “Help us pray so that we may feel responsible to protect the gift of creation and the natural beauty of our land, which we are losing sight of ever more rapidly,” he told the pontiff.

“Help us understand that our material wealth is God’s gift to us, which must be shared with those in need, and not an opportunity for corruption, discrimination, conflict or division.”

He asked the Holy Father to pray for priests and people with religious vows so that they are not blinded by power money or pleasure and for Gozitan Christians to live faith not only as tradition or socio-culture, but as witnesses of fraternal love.

Three testimonies followed. First, a Gozitan couple, Sandi and Domenic, told the pope how 25 years ago, just four years after they got married, Sandi was diagnosed with multiple sclerosis. She spoke to the pope about how her immobility led her to lose hope and faith and question God’s love, which she later found in her husband and daughter.

The couple said they found peace when they embraced their suffering, knowing God is with them.

Two other young activists in the Church, Jennifer Cauchi and Francesco Pio Attard spoke to the pope about their struggles in life and how faith helped them overcome them.

Francis ended the payer meeting with a homily about the Christian meaning of suffering and how Catholics can use faith to find love and peace in times of great challenges such as these.

The pope was then presented with a number of gifts, among them art pieces created by local artists. 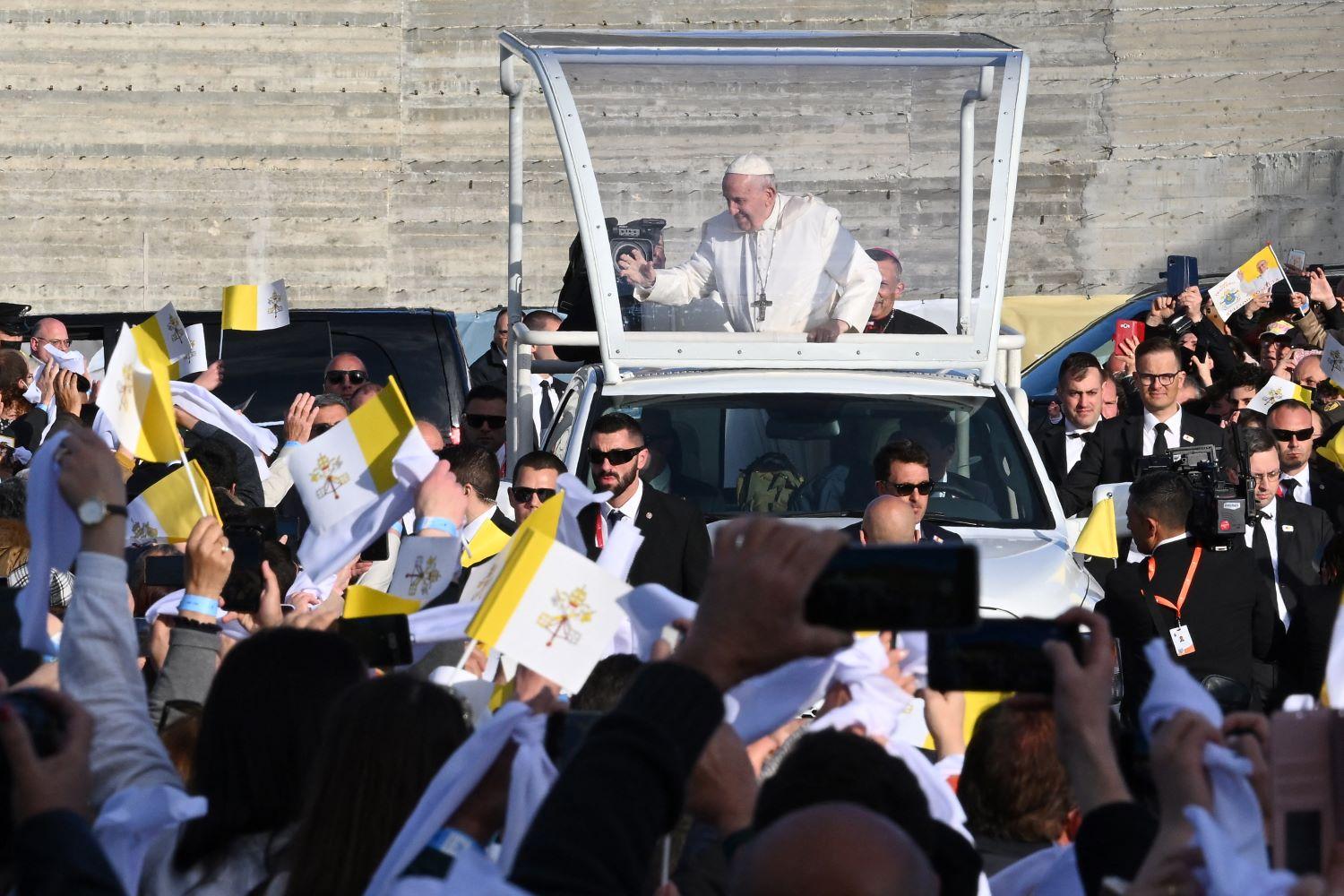 Attendees greet Pope Francis as he arrives in the popemobile car for a meeting of prayer outside Ta' Pinu. Photo: AFP

The journey was reminiscent of the only other time a pope visited Gozo. On May 25, 1990, Pope John Paul II had similarly visited Gozo and celebrated mass at the Ta’ Pinu sanctuary.

On Saturday, Francis had lunch at the Apostolic Nunciature in Rabat, where he will also spend the night.

But the 85-year-old pontiff hardly had any time for rest before he hopped on his official car again to head for Gozo.

He left the Nunziature just before 3.30pm and headed for Valletta, where the Virtu catamaran Maria Dolores was waiting for him.

Pope Francis joking with an elderly man inside the basilica.

In the morning, the pope made a remarkable speech earlier at the Palace in Valletta urging Malta to fight corruption and land speculation.