Malta must continue to fight corruption, foster honesty in politics and stop unbridled construction and land speculation, Pope Francis said in his first public speech during a visit to the country.

“Honesty, justice, a sense of duty and transparency are the essential pillars of a mature civil society. May your commitment to eliminate illegality and corruption be strong, like the north wind that sweeps the coasts of this country," the pope said in a speech at the Grandmaster's Palace in Valletta.

"May you always cultivate legality and transparency which will enable the eradication of corruption and criminality, neither of which acts openly and in broad daylight.”

He noted that the Maltese national anthem is in itself a prayer to God to protect the land, and called for Maltese people to care for the environment.

“In Malta, where the luminous beauty of the landscape alleviates difficulties, creation appears as the gift that, amid the trials of history and life, reminds us of the beauty of our life on earth,” he said.

“It must therefore be kept safe from rapacious greed, from avarice and from construction speculation. Instead, protecting the environment and the promotion of social justice are optimal ways to instil in young people a passion for healthy politics and to shield them from the temptation to indifference and lack of commitment.”

Pope Francis began a two-day visit to Malta on Saturday - a trip that was originally scheduled to take place in 2020 but was postponed due to the pandemic.

His visit, which will also take him to Gozo later on Saturday, will culminate with a mass at the Granaries in Floriana on Sunday morning.

The pope's first speech in Malta drew inspiration from the four winds, with the pontiff using each wind as a metaphor. 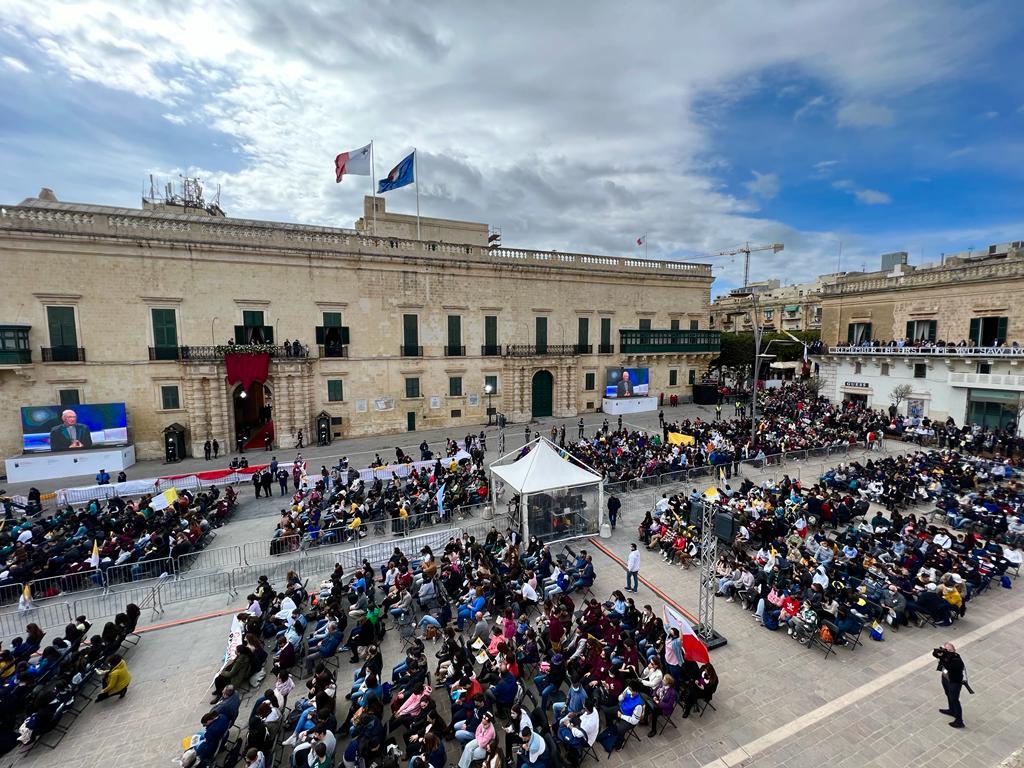 He said that while western culture has brought freedom and democracy to Malta, it also risks detaching Maltese people from their roots, giving them "false prosperity dictated by profit, by needs created by consumerism, to say nothing of the right to have any and every right."

Francis touched upon Malta's Biblical history, saying he had, from the moment of landing, felt the hospitality that St Paul spoke of. That is a treasure that Maltese people have "handed on from generation to generation," he said.

The pope had words of praise for Malta's decision to outlaw abortion, saying that the country protected life from conception. He urged the Maltese to similarly protect vulnerable people and to fight for the rightful dignity of workers.

Migration: 'some are indifferent onlookers'

The south wind led the pope to speak about the plight of migration, thanking the people of Malta for welcoming so many migrants in the name of the gospel.

He acknowledged that the growing influx of migrants created "discouragement and frustration" among people. The conflict raging in Ukraine teaches us that the burden of migration must be shared, he said.

“Some countries cannot respond to the entire problem, while others remain indifferent onlookers!” he pleaded.

“Civilised countries cannot approve for their own interest sordid agreements with criminals who enslave other human beings.”

When speaking about the eastern wind, Pope Francis weighed in on the Ukraine war.

“We had thought that invasions of other countries, savage street fighting and atomic threats were grim memories of a distant past,” he said, insisting that war had long been looming, since mighty nations insisted on developing armaments of war. 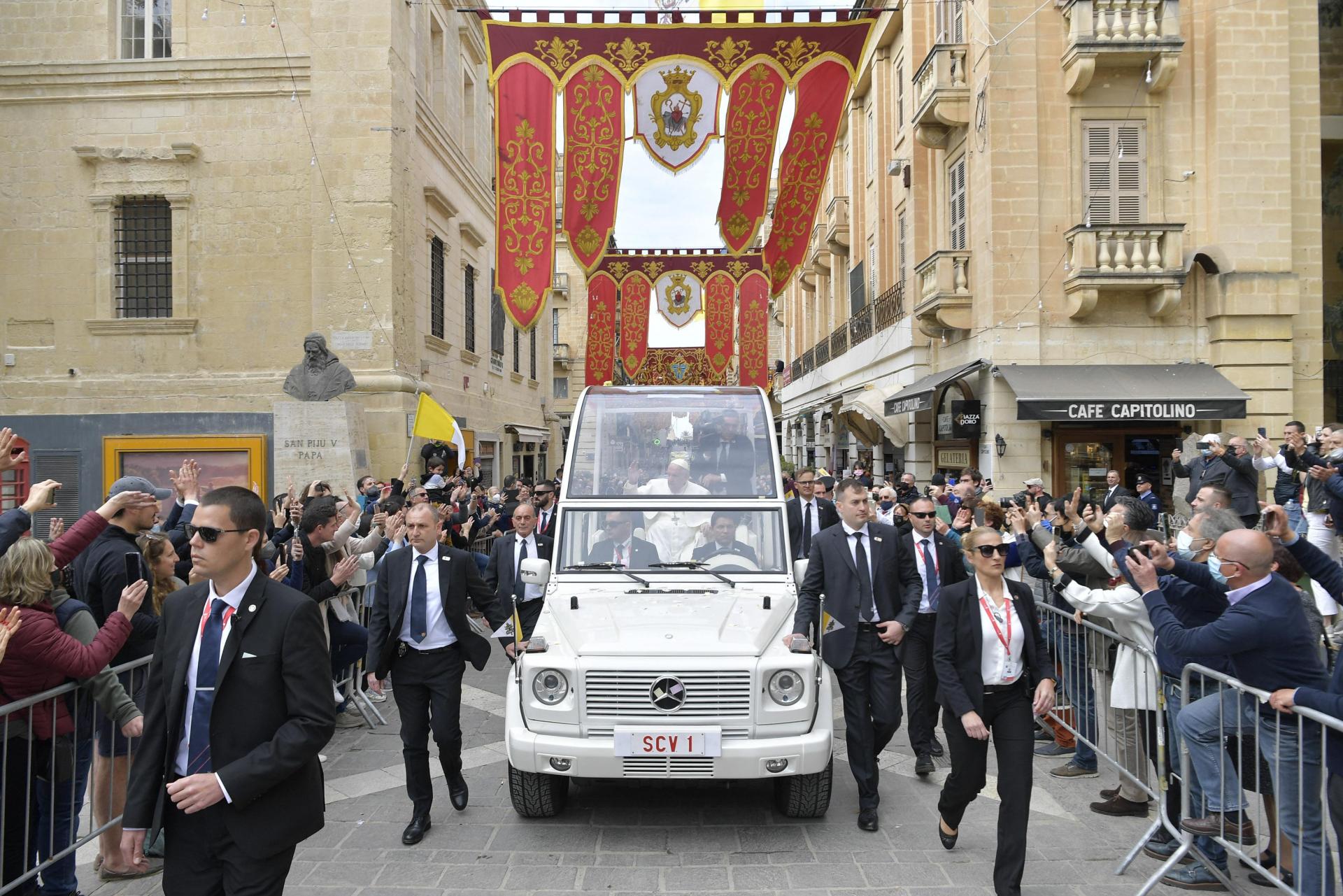 Crowds greet the Pope and take photos as he is driven through Republic Street, Valletta to be taken to the Grandmaster's Palace. Photo: AFP

“Now that the night of war has fallen upon humanity, let us not allow the dream of peace to fade!”

President Vella: 'Our planet is sick'

President Vella spoke before the pope, and in his speech he made a heartfelt plea to protect the environment.

“Holy Father, our planet is sick, angry and tired,’ he said. “Yet we keep ignoring its manifest signs of environmental degradation, climate change and exploitation of its resources.”

Referring to the war in Ukraine, President Vella said it had brought out the worst and the best in humanity.

“Against a backdrop of destruction we are seeing unity,” President Vella said.

He said he joined in the Pope’s calls for an end to violence in Ukraine.

Vella also touched on the migration crisis, acknowledging the pope’s deep feelings about the issue. 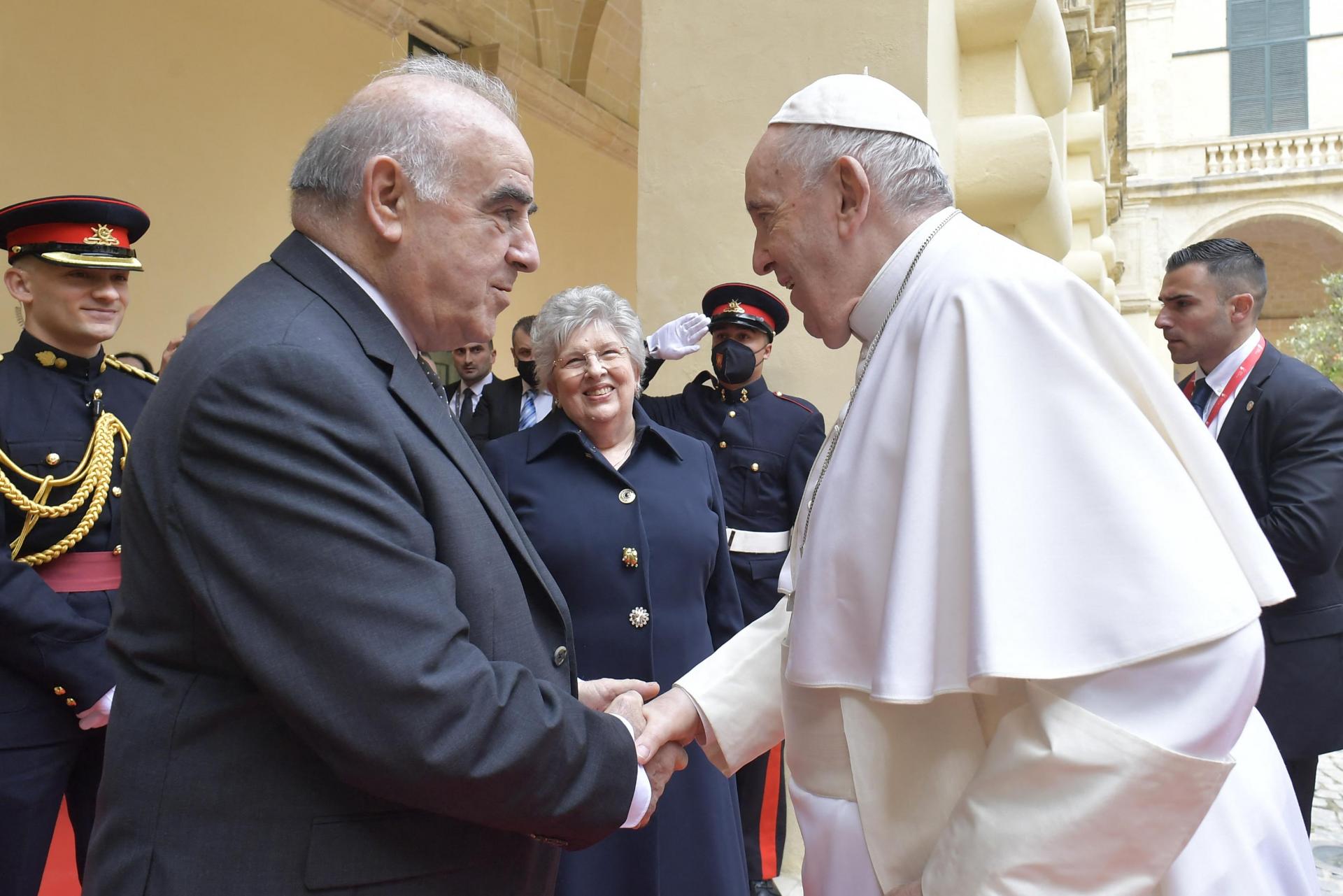 “We all feel your pain and disillusionment whenever dead bodies are washed on our shores and when migrants arrive in pitiful situations,” he said. “Malta has never shied away from its commitments and obligations to save lives.”

He asked for the support of other, better-resourced countries, when handling migrants. Aside from action plans and documents, solidarity, Vella said, had to be put into actual practice.

The president – a staunch anti-abortion advocate – also touched on the sensitive issue, saying that “we should above all respect the sanctity of life, from its beginning to its natural end.”

The pope's meeting at the Palace was his first appointment after landing in Malta on Saturday. After the arrival ceremony, the Pope was driven to Valletta in his official car - a white Fiat Cinquecento, in a typical display of his humility -  in streets that had been cleared of traffic.

Wellwishers waved from the roadside as he drove past, enthusiastically shouting "Viva l-Papa" [Long live the Pope].

Upon arrival at Portes de Bombes, the pope climbed out of his car and onto one of two popemobiles shipped to Malta for the occasion. 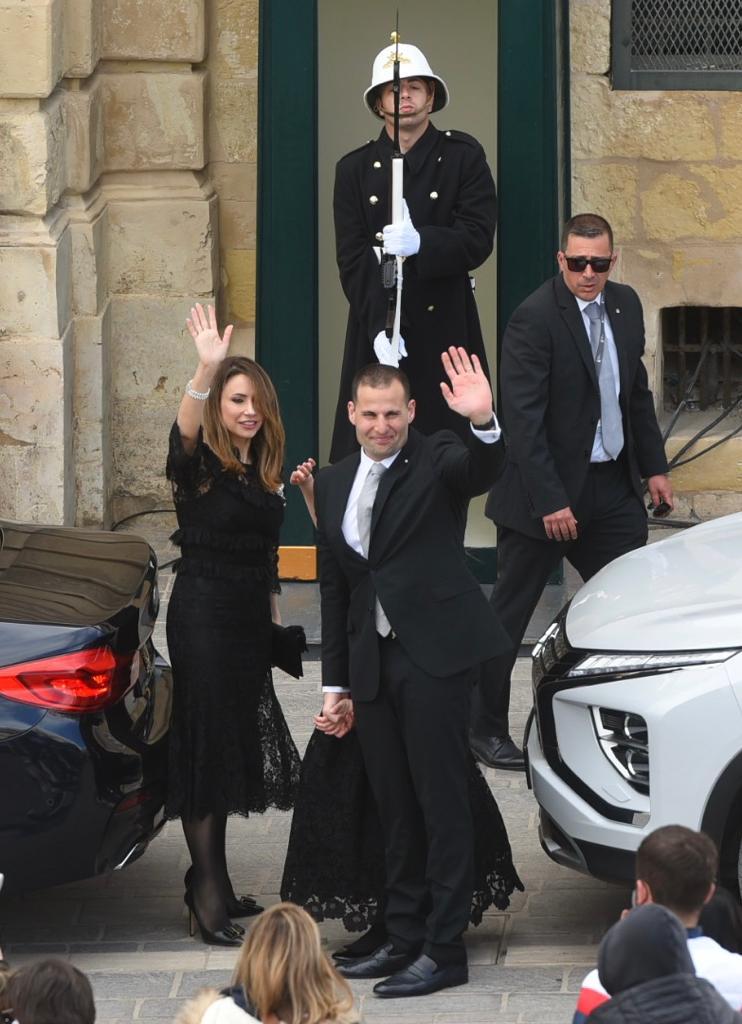 The custom-built Mercedes paraded him for the first time through St Anne’s Street in Floriana, City Gate, Republic Street and all the way to the Grand Master’s Palace in St George’s square.

At the Grand Master’s Palace, he met with President George Vella and Prime Minister Robert Abela and their families, having already been greeted by them upon his arrival at Malta International Airport.

They exchanged gifts and posed for photos, before walking through the Palace corridors, where the Pope was greeted by members of the diplomatic corps and several other dignitaries. Some 150 state officials met with the Pope at the Palace.

Pope Francis gifted President Vella with a medal depicting St Paul with a serpent at his feet, with Ta' Pinu and the prow of a ship also featuring. President Vella reciprocated with a painting by artist Manuel Farrugia. 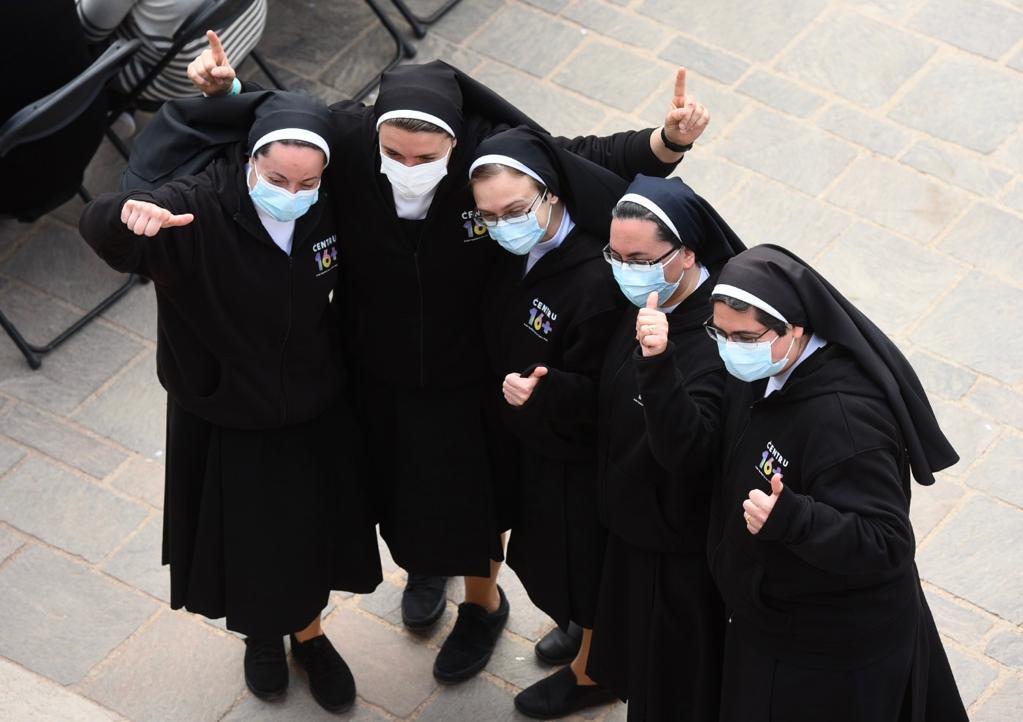 A group of nuns pose for a photo in St George's Square. Photo: Chris Sant Fournier

The pope then greeted thousands gathered in St George's square, waving to them from a balcony and blessing them.

Just this week, the Palace that was closed to the public for months of restoration works, saw the Oath of Office of the Prime Minister and his cabinet, and it has now welcomed the Pope. Talk about a big comeback.

This afternoon, the pope will head to Gozo for a prayer meeting at Ta’ Pinu.