New data from the National Statistics Office shows how salaries differ across Malta depending on where you live and whether you are a man or a woman.

Figures from 2019 show the average gross annual basic salary for a worker in the country stands at €19,594.

The figures were released by the National Statistics Office as part of the Regional Statistics Malta 2021 Edition, presenting statistics covering a range of topics, from demography to education, the labour market and transport.

Broken down into the average in Malta and Gozo and Comino, the gender gap is less stark on the sister island.

Earnings varied not just by sex, but also by district.

The highest average gross annual basic salary for both men and women was registered in the western district, made up of Attard, Balzan, Dingli, Iklin, Lija, Mdina, Mtarfa, Rabat, Siġġiewi and Żebbuġ.

Where are people working?

The report states that in 2019, the highest proportion of employed persons in Malta worked in:

In Gozo and Comino, the majority worked in

In 2019, figures showed that 210,510 residents in Malta worked on a full-time basis, an increase of 6.3% when compared to the previous year. 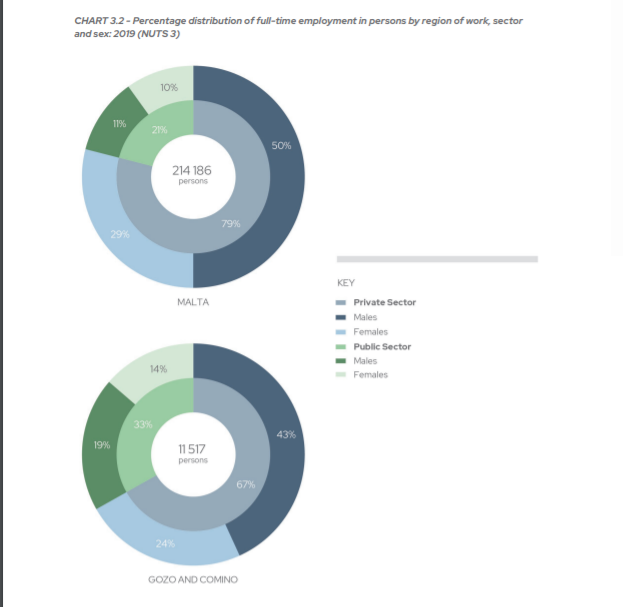 Breakdown of full-time employment by sex, sector and region

Gozo residents employed on a full-time basis in Malta totalled 3,578, where 5.1% working in the public sector, the rest in the private sector.