Malta on Sunday joined a global commemoration of thousands of people who died or disappeared at the borders, with migrants and activists calling out the Maltese authorities for failing to save lives at sea.

Known internationally as CommemorAction, the annual event was first organised in 2019 in remembrance of a group of asylum seekers shot dead at the beach of Tarajal, bordering north Morocco.

On February 6 of 2014, more than 200 migrants tried to enter the city of Ceuta, a Spanish enclave, but the Spanish Guardia Civil fired rubber bullets at people in the sea to prevent them from entering Spanish territory.  Fifteen people were killed on the Spanish side, dozens disappeared and others died on Moroccan territory.

The CommemorAction remembrance day is now marked in dozens of cities worldwide as a tribute to thousands who died while crossing borders. In 2021, at least 1,971 people are known to have died or disappeared in the Mediterranean. According to the UNHCR, more than 23,000 people did not make it across the Mediterranean over the past decade.

The event was held for the first time in Malta on Sunday, when people, including individuals from the migrant community, academics, social workers, president emeritus Marie Louise Coleiro Preca, non-governmental and Church organisations and local activists, met at the Gardjola gardens in Senglea.

“The Mediterranean remains one of the world’s deadliest migratory routes yet time and time again, we witness Maltese authorities looking away from their duties to protect the lives of people seeking asylum in our search and rescue zone,” African Media Association’s Regine Psaila said on behalf of 36 groups and associations, calling on the authorities to respect human rights, international law and the 1951 Geneva Refugee Convention.

“It is an established fact that Maltese authorities collaborate with the Libyan Coastguard in illegal pushbacks. We regularly read reports of Malta ignoring distress calls and refusing disembarkation to the rescued. We witness asylum seekers being subjected to degrading and humiliating treatment. The imprisonment of people on Captain Morgan boats in 2020 is a tragic case in point.

“We remind the authorities that these people are mothers, fathers, sisters, brothers and children with names,” Psaila added.

The groups also called on the EU to ensure Malta and other states can offer safety and dignity to migrants.

Those gathered in Senglea lit candles and laid flowers next to a long list of victims as they listened to a moving poem read out by Thomas Eyonga, a young man who survived the trip from Cameroon and landed here in 2018.

"No one leaves home, unless home is the mouth of a shark. You only run for the border when you see the whole city running as well; your neighbour running faster than you, the boy you went to school with, who kissed you dizzy behind the old tin factory is holding a gun bigger than his body.

"You only leave home when home won`t let you stay. No one would leave home unless home chased you, fire under feet, hot blood in your belly," he read.

'I’m sorry we couldn’t make it alive together'

Eyonga told Times of Malta he saw several fellow asylum seekers die in the desert and he himself lost brothers and friends who left their home country on separate journeys and never made it alive.

“I want to pay tribute also to those whom I don’t know. I respect their fight – a fight we all took together… and I’m sorry we couldn’t all make it alive together.”

He said sharing the heartfelt poem with those present had brought back memories of the fear he felt during the journey with an unknown destination.

'A journey of no return'

“All you know is that it’s a journey of no return. We were out at sea for three days. By the second night, we were very scared as we had no fuel, food or water.

“The sea is just an open space – you don’t know where you are or where you’re headed. Knowing what I know now, I advise my African peers not to take the risky journey… but I understand them - I know what pushed me to take the risk.

“And I know that no matter what I tell them, I am not going to stop them. So, the only thing we can do as humans is to save lives. We cannot save animals but not humans.” 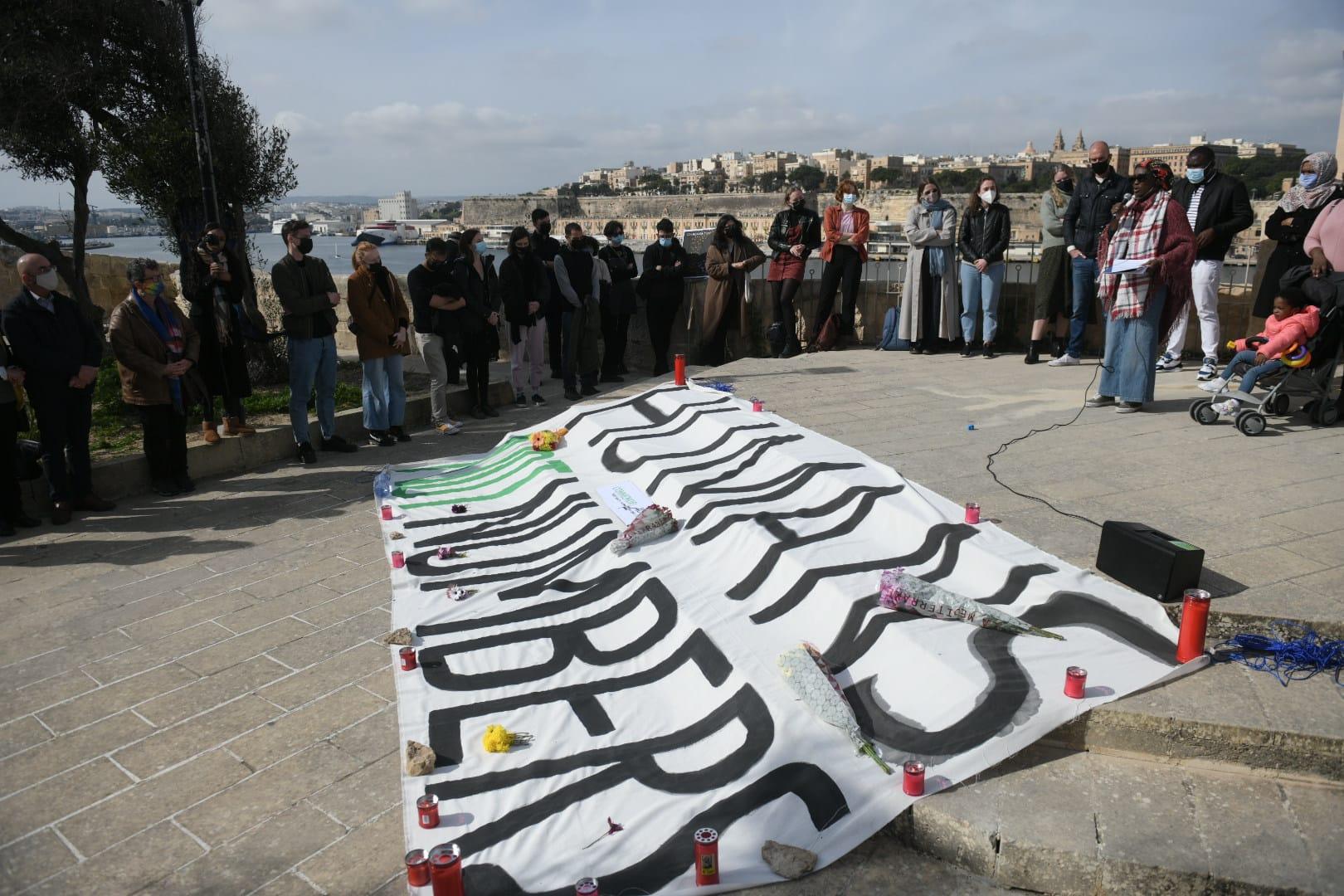 Those gathered in Senglea lit candles and laid flowers next to a long list of victims as they listened to a moving poem. Photo: Matthew Mirabelli