A Chinese negotiator implicated in the Panama Papers scandal introduced to Enemalta a company secretly funded by Yorgen Fenech’s 17 Black as the “sole agent” of the Montenegro wind farm project, Times of Malta can reveal.

Chen Cheng, who slain journalist Daphne Caruana Galizia had uncovered as the owner of a secretive offshore structure set up by Nexia BT, gave the presentation about the project to Enemalta’s board on December 15, 2014.

In the presentation, Chen described an intermediary company called Cifidex as the sole agent of the project, a full year before Cifidex had even bought the shares from Fersa, the original concessionaire of the Montenegro wind farm venture.

Enemalta’s board approved the project in principle that same day. 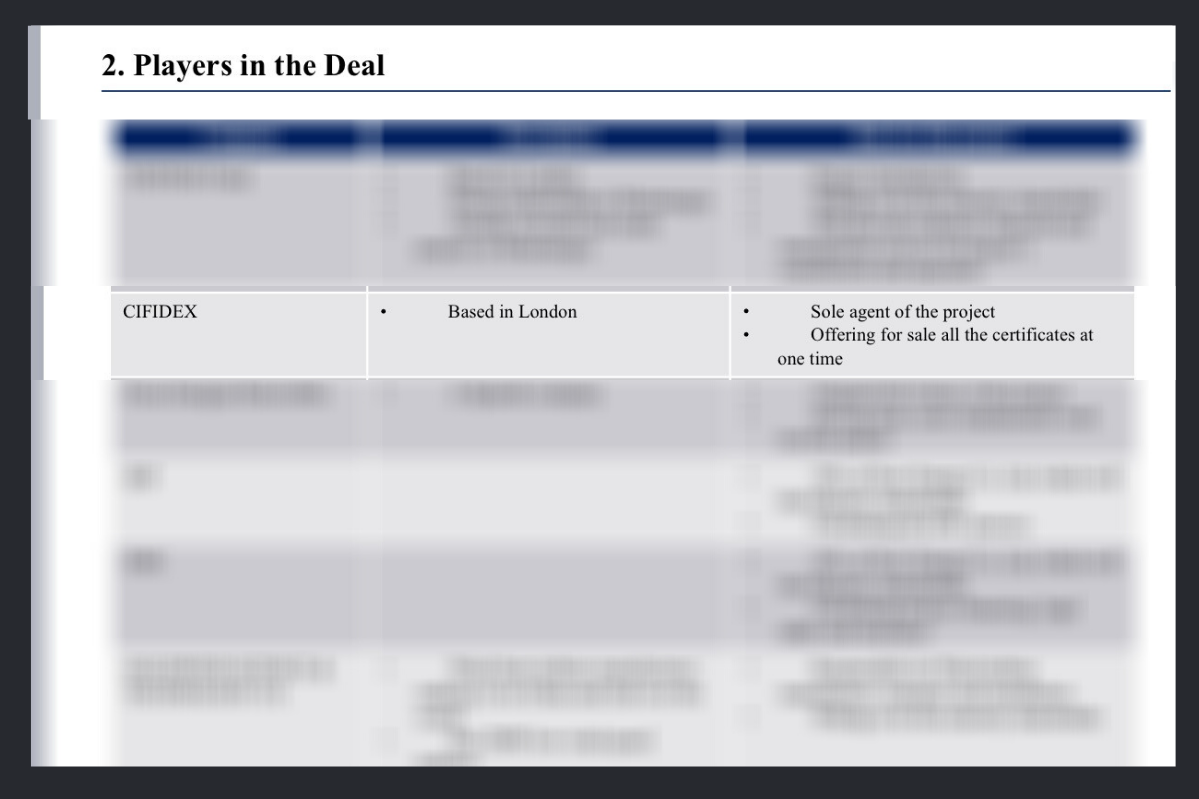 An excerpt from the presentation given by Chen Cheng to Enemalta in December 2014.

However, public records indicate that Cifidex only began negotiations to take over the Montenegro project the same month Enemalta’s board signaled its intent to invest in the wind farm project.

Cifidex entered into a €2.9 million promise of sale agreement with Fersa, the original concessionaries of the project, two months later, on February 12, 2015.

Times of Malta and Reuters revealed in June how 17 Black secretly funded Cifidex’s €2.9 million purchase of the wind farm site in December 2015.

Cifidex then sold the same shares to Enemalta two weeks later for €10.3 million, over triple the price Cifidex paid for them.

After the Enemalta transaction was completed, Cifidex wired back a total of €7.8 million to 17 Black by May 2016, including the original €3 million used to fund the share purchase and what sources described as a €4.6 million profit share.

Cidifex were initially asking €14 million for the project shares, which was reduced to €12.5 million in a subsequent round of negotiations in the UK on September 11, Chen said in his presentation.

Times of Malta is informed that Kevin Chircop, a former adviser to Energy Minister Konrad Mizzi and Enemalta’s current chairman, was involved in the negotiations.

At the time, Chircop was Enemalta’s director of projects. 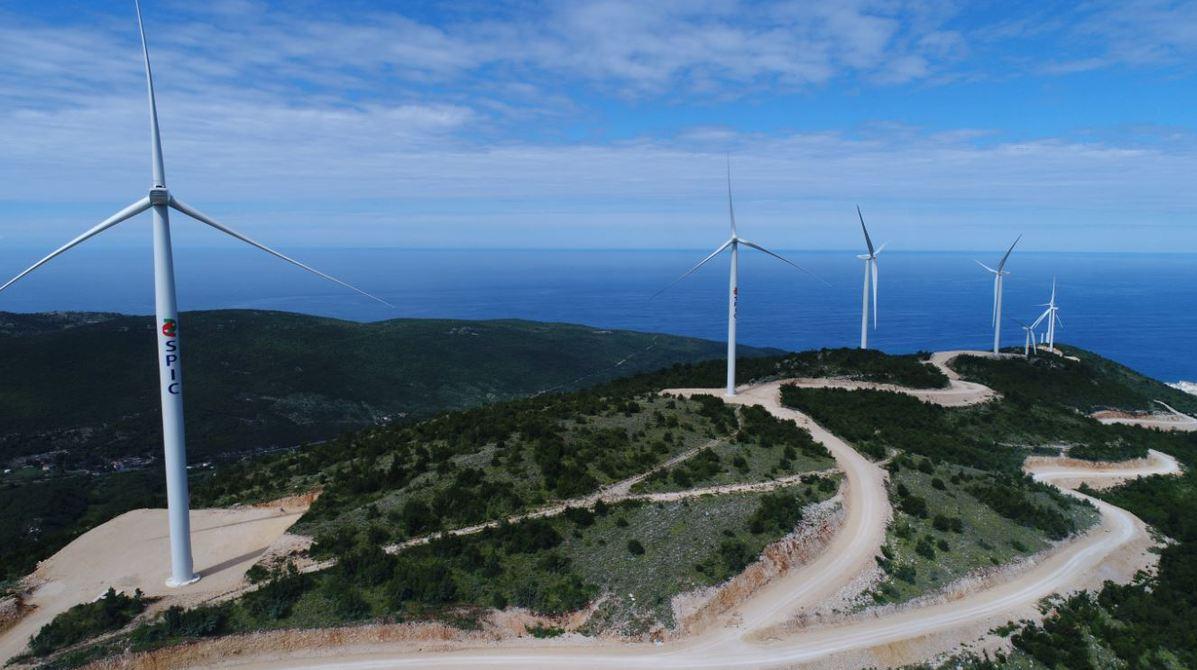 Credit card transactions by Mizzi put him in London at the time the September negotiations were taking place.

Other transactions detailed in a leaked FIAU report show the former minister was in Montenegro on September 15 and Shanghai on September 28.

Another round of negotiations with Cifidex on October 14 saw the asking price reduced to €11.5 million, according to the same presentation. On that same date, Mizzi was in Montenegro, according to his credit card transactions.

Chircop and Mizzi did not respond to a request for comment by the time of writing. 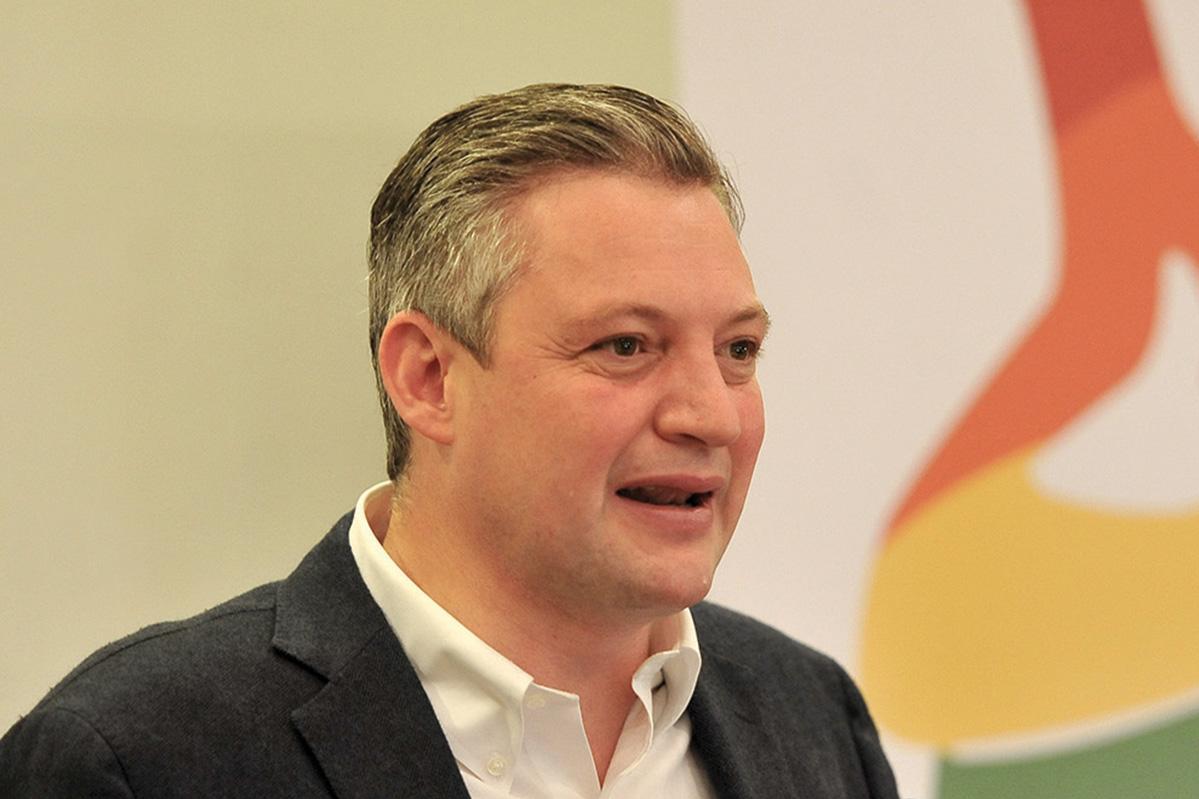 Konrad Mizzi was kicked out of Labour's parliamentary group soon after the wind farm revelations.

Apart from his previously unknown involvement in the wind farm project, Chen also played a role as a negotiator in the Chinese state-owned Shanghai Electric Power’s €320 million investment in Enemalta.

Former Enemalta chairman and CEO Fredrick Azzopardi confirmed when contacted by Times of Malta that Chen Cheng gave what he described as a “general presentation” about the wind farm project to Enemalta’s board.

Azzopardi said he had been invited last August to an “interview” about the project by Enemalta’s internal auditor, who is leading a probe into the windfarm deal.

Enemalta’s internal auditor Mantoine D’Ambrogio Araci declined to comment about his findings so far when contacted by Times of Malta last month.
The police are also said to be investigating the deal.

Documents in the Panama Papers show Nexia BT’s money-laundering reporting officer Karl Cini initiated the transfer of Torbridge Services to Chen in February 2015, the same month when Cifidex signed the promise of sale for the wind farm site.

The leaked FIAU report showed Cini was also involved in setting up an account for Torbridge Services at the now shuttered Pilatus Bank in June 2015. 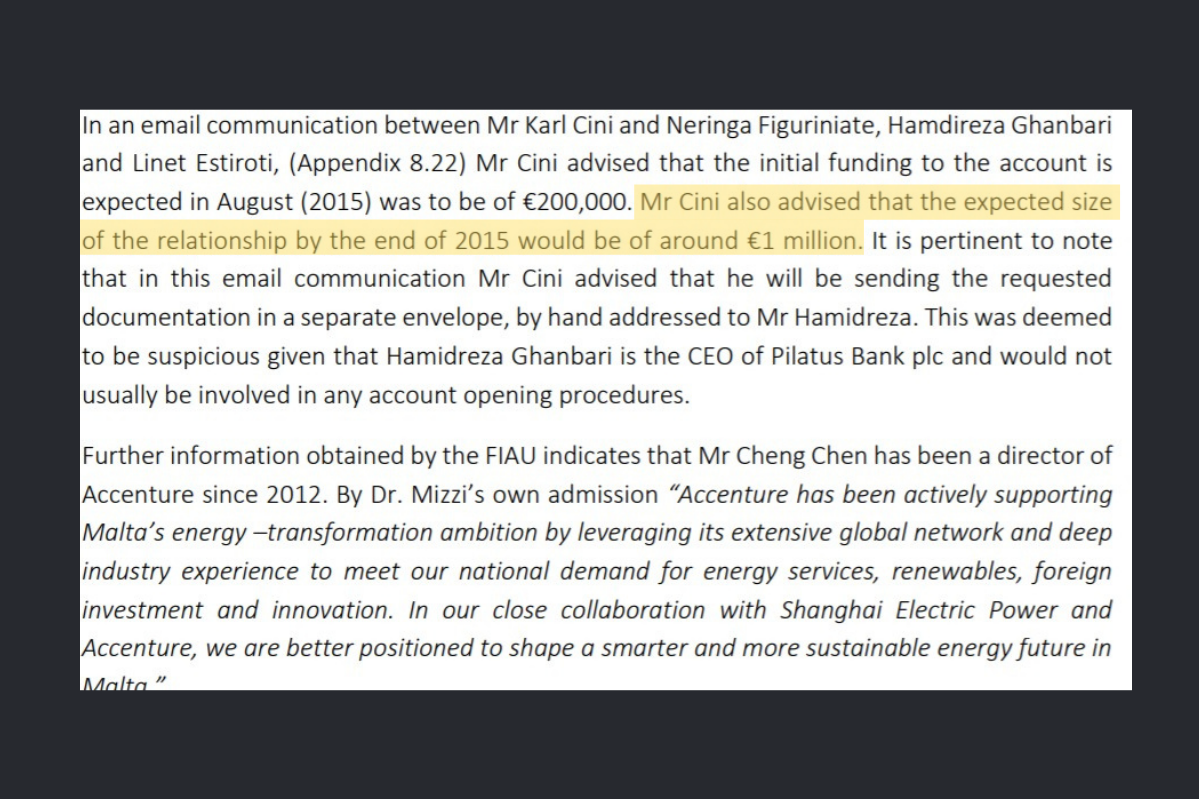 A leaked FIAU report said that Torbridge Services was expected to receive around €1 million by end of 2015.

According to the report, Nexia BT told Pilatus Bank that €1 million was going to flow into Chen’s account by the end of that same year.

An account statement obtained by the FIAU showed the transactions did not end up taking place. 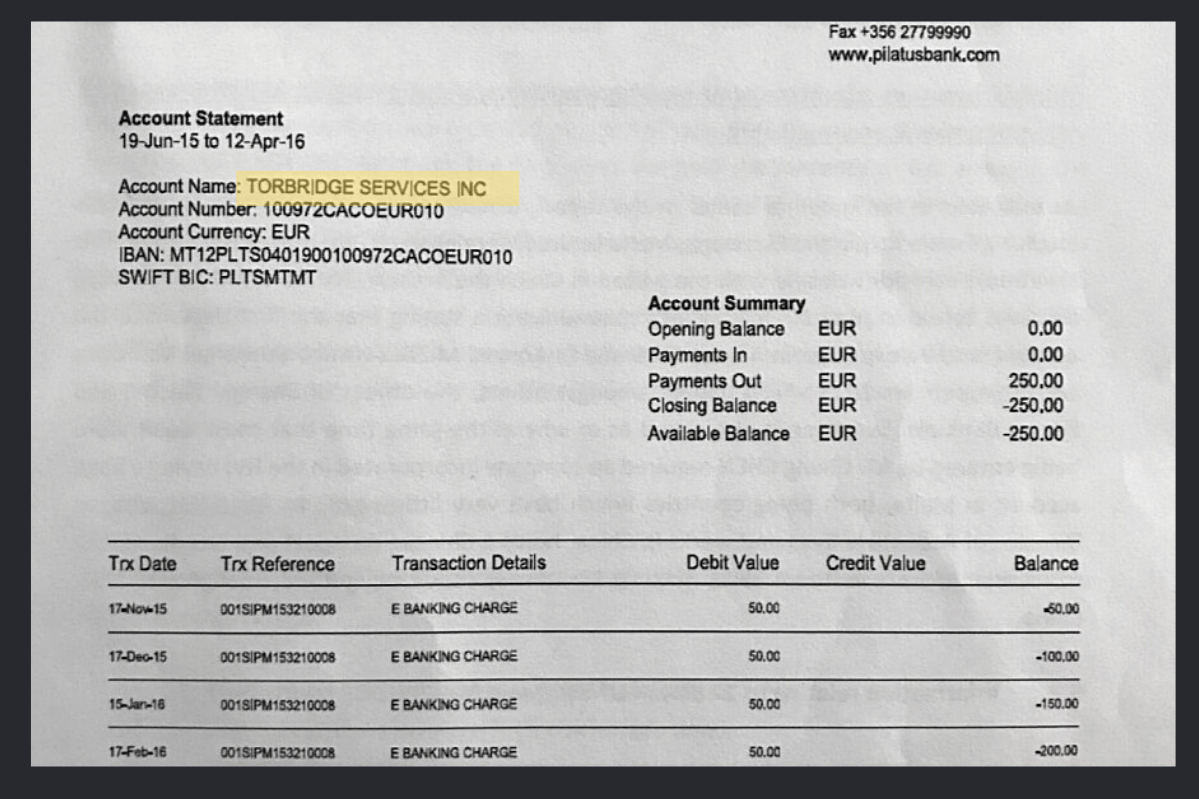 An investigation by the FIAU found that Nexia BT opened up an account at Pilatus Bank for Chen Cheng's company Torbridge Services.

Attempts to open up bank accounts for Panama companies owned by Konrad Mizzi and former OPM chief of staff Keith Schembri were made by Nexia BT that same summer.

Nexia BT said in a leaked December 2015 e-mail that the two companies would receive up to $2 million from 17 Black in a single year.

Chen Cheng’s business card was found among the documents seized by the police after Fenech’s arrest in November 2019 in connection with Caruana Galizia’s murder.