Murder suspect Yorgen Fenech secretly made a €4.6 million “profit” via his secret company 17 Black off Enemalta’s decision to buy a wind farm in Montenegro, evidence uncovered by Times of Malta and Reuters shows.

Public records show Enemalta paid €10.3 million to acquire the shares in the wind farm venture from a company called Cifidex on December 28, 2015.

However, just over two weeks before, Cifidex had bought those same shares for €2.9 million from Fersa Renovables, a Spanish consortium given a concession to run the wind farm by the Montenegro government in 2010.

The shares were bought from Fersa Renovables for a third of the price paid by Enemalta.

The evidence shows Cifidex funded the share purchase through a €3 million payment transferred by 17 Black to the company in late November 2015.

By June 2016, Cifidex had sent back to 17 Black the original €3 million along with an additional “profit” of at least €4.6 million, three sources with access to 17 Black’s banking records in Dubai have confirmed.

The timing of the December 2015 Montenegro deal coincides with an e-mail sent out by government advisers Nexia BT, mentioning how 17 Black would feed up to €2 million into offshore structures they set up for former Energy Minister Konrad Mizzi and former OPM chief of staff Keith Schembri.

Fenech, who was arrested in November and later charged with complicity in Daphne Caruana Galizia’s murder, did not respond to a request for comment via his lawyers about the Montenegro deal.

The murder suspect resigned as a director of the Electrogas power station shortly before his arrest. 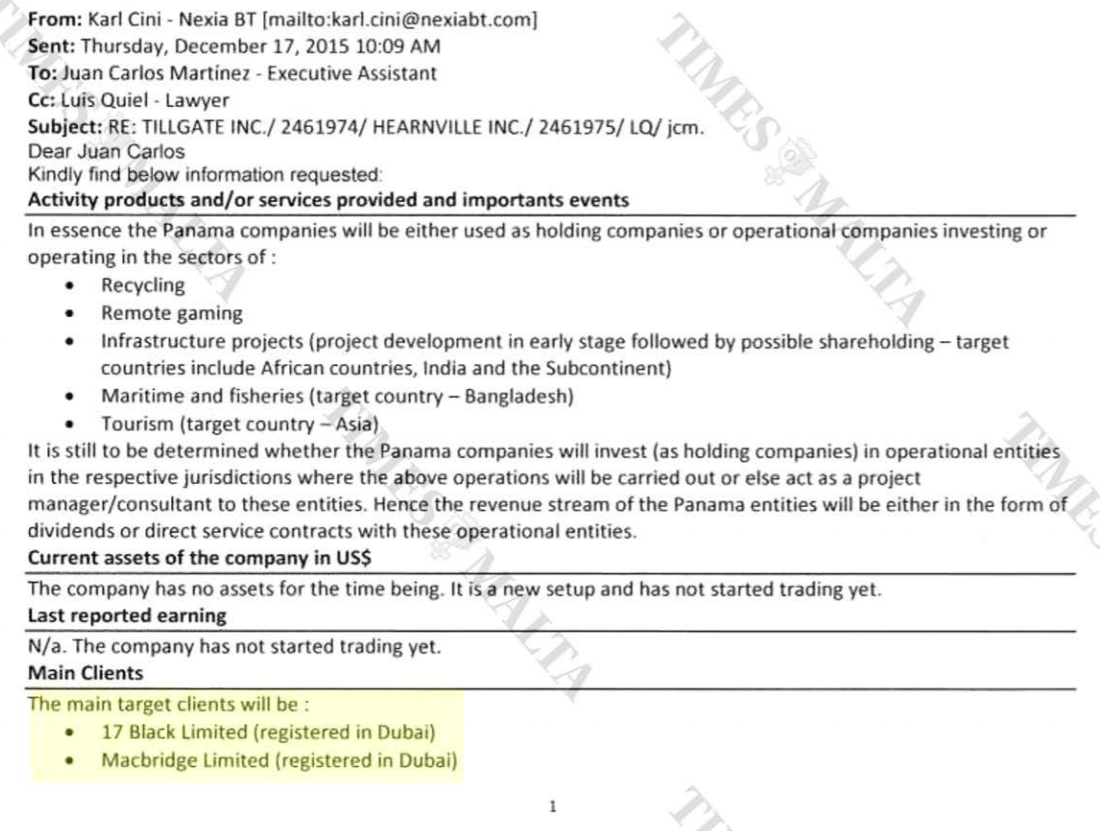 The Nexia BT e-mail naming 17 Black as one of the main sources of income for the Panama companies. 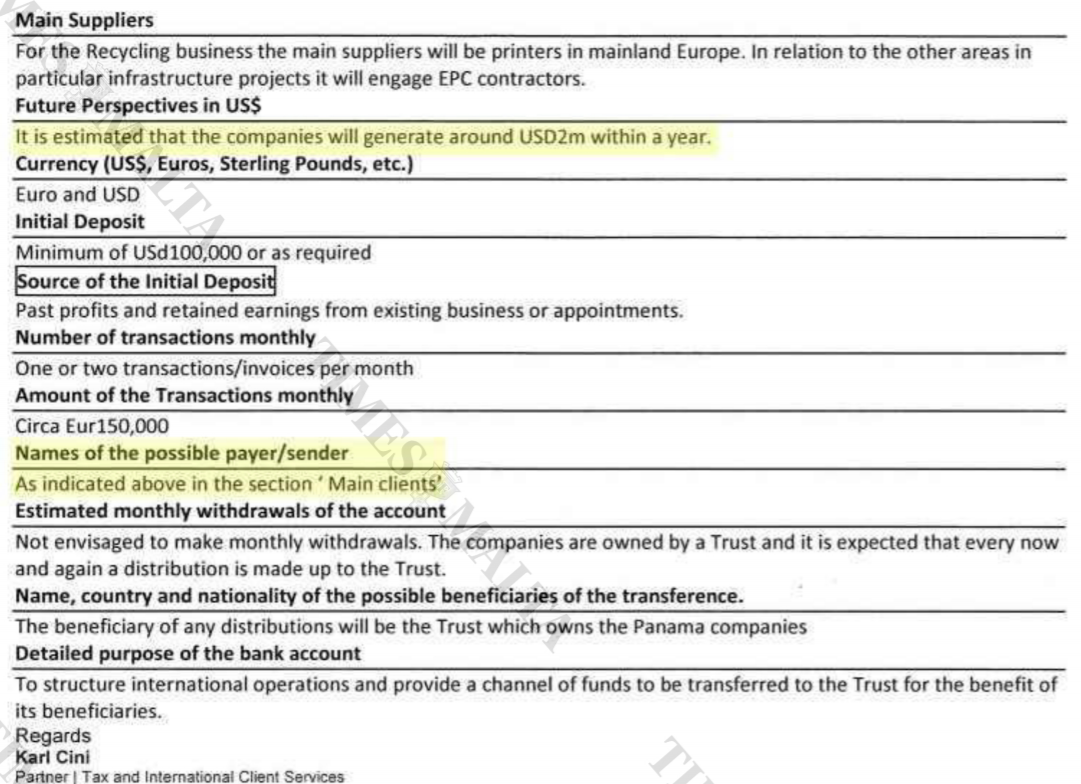 Enemalta said in a reply to a request for comment about the Montenegro Mozura Hill deal that the information “is being compiled and verified accordingly”.

A Times of Malta freedom of information request for all of Enemalta’s correspondence with Cifidex and its representatives was rejected on the basis of “trade secrets”.

The e-mail mentioning 17 Black as a major source of funds for Schembri’s and Mizzi’s Panama companies was part of an application to open bank accounts for their secret offshore structures at the Winterbotham Bank in the Bahamas.

This application process was aborted once Caruana Galizia started to tease knowledge on her blog about what the two government officials were up to in early 2016.

No money is known to have been transferred to the Panama companies from 17 Black. It is unknown what 17 Black did with the €4.6 million “profit” from the Montenegro deal.

A leaked draft 2017 report from the Financial Intelligence Analysis Unit, Malta’s anti-money laundering watchdog, had flagged Mizzi’s frequent trips to Montenegro in the lead up to the wind farm deal.

The FIAU had flagged Mizzi's frequent trips to Montenegro in a draft 2017 report.

The FIAU report, which detailed reasonable suspicion of criminal activity in Mizzi’s dealings, was finalised and sent to the police in spring 2018.

Both Muscat and Mizzi told Times of Malta they had no knowledge of Fenech’s or 17 Black’s connection to the project.

"I dispute your assertion that an email from my service provider states that I might profit from 17 Black. I have publicly stated that I have no connection whatsoever with 17 Black," Mizzi said. 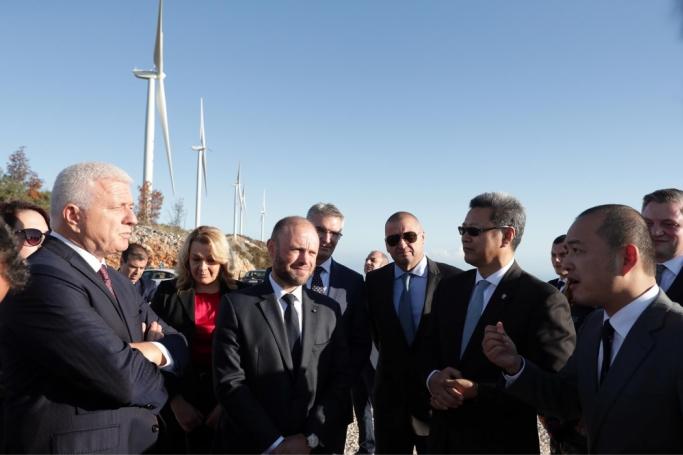 On Schembri's role in the project, Muscat said that to his knowledge, his chief of staff was not involved in the negotiations.

“But it is best to ask him [Schembri] directly about this.”

Schembri, who according to court testimony in the murder case is a close friend of Fenech, did not respond to a request for comment by Times of Malta.

In 2018, Schembri confirmed having a draft business plan with 17 Black, but has never elaborated further. In November, he dropped a libel case about the Panama Papers, therefore avoiding having to testify about his link to Fenech’s company.

Fenech has claimed that it was Schembri who masterminded Caruana Galizia’s murder, an allegation rejected by the former chief of staff.

On his part, Muscat said his role in the project was to foster relations with the government of Montenegro at presidential and prime ministerial level.

“The Montenegro project was part of the remit the government had agreed upon with our international partners on not only turning around Enemalta, which we did, but also identifying joint investment opportunities in third countries,” Muscat said.

A Vestigo Capital subsidiary is a minority shareholder in the wind farm project along with Enemalta and Shanghai Electric. 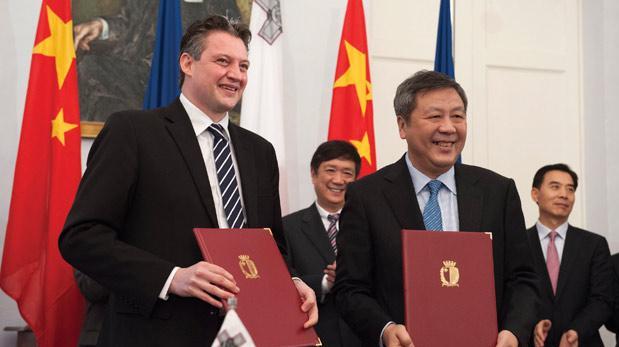 Kornad Mizzi presiding over the signing of a €320 million equity deal with Shanghai Electric in 2014.

However, a spokesman for Vestigo Capital denied the company introduced the project to either the Maltese government or Enemalta.

Fersa Renovables, the original owners of the wind farm site, had listed Cifidex as being a subsidiary of Vestigo Capital in their annual accounts.

The entry was later corrected, with Fersa declaring that Cifidex is not a subsidiary of Vestigo Capital.

The Vestigo Capital spokesman said Vestigo Clean Energy is a minority partner in the wind farm joint venture, and aside from this investment, has no other connection to Enemalta.

According to the spokesman, neither Vestigo or any related entities or employees are connected to Cifidex.

Europol and police team should look into murder and corruption - Repubblika

Appoint a joint Europol and Malta Police team to investigate the assassination of Caruana Galizia and the corruption connected to it, Repubblika is urging the government.

"Journalists, with their limited resources, are revealing huge scandals while it is clear that the police chose to look the other way, and even go so far as to cover up for corrupt politicians," the NGO said in a statement on Friday.

"It is obvious that a number of high officials are compromised in this matter."

Repubblika called on Robert Abela to stop those who have betrayed Malta and are endangering our common wealth from escaping justice.

Police should interrogate those involved in Enemalta deal - PN

The Police should interrogate those involved in the Enemalta deal, the PN said on Friday, adding that Muscat, Schembri and Mizzi had taken personal interest in the project.

"The PN expects Muscat, Schembri and Mizzi to be arrested, investigated and pay for their actions... the institutions can no longer sit on the fence and remain silent when faced with additional proof of corruption by those who until a few months ago were part of the leadership of this country."

Malta’s European partners are willing to help our country stand up to the violence of this corruption, it said in a statement late on Friday.

The foundation said that it has "never been clearer that Maltese law enforcement, which collapsed under the weight of Fenech, Mizzi and Schembri’s international corruption during Muscat’s government, needs assistance".

"Daphne Caruana Galizia's murder and the scale and extent of the transnational crime exposed by Caruana Galizia and the journalists continuing her work can only be properly investigated by a joint investigation team unrestricted by national borders," the foundation added.