Electrogas power station investors Mark Gasan and Paul Apap Bologna signed off on a side deal to pay Yorgen Fenech €2.5 million in fees for “sourcing and organising contractors” and “interfacing with authorities” on the Electrogas project, a contract reviewed by Times of Malta as part of the Daphne Project shows.

Other documents leaked to journalist Daphne Caruana Galizia before her assassination reveal how the Electrogas shareholders were paid over €16 million in such success and development fees using funds from a government-guaranteed loan given to Electrogas.

A total of €12.5 million in success fees was paid out to Electrogas shareholders GEM Holdings, Socar Trading and Siemens by Electrogas, in 2015, before construction on the power station had started. 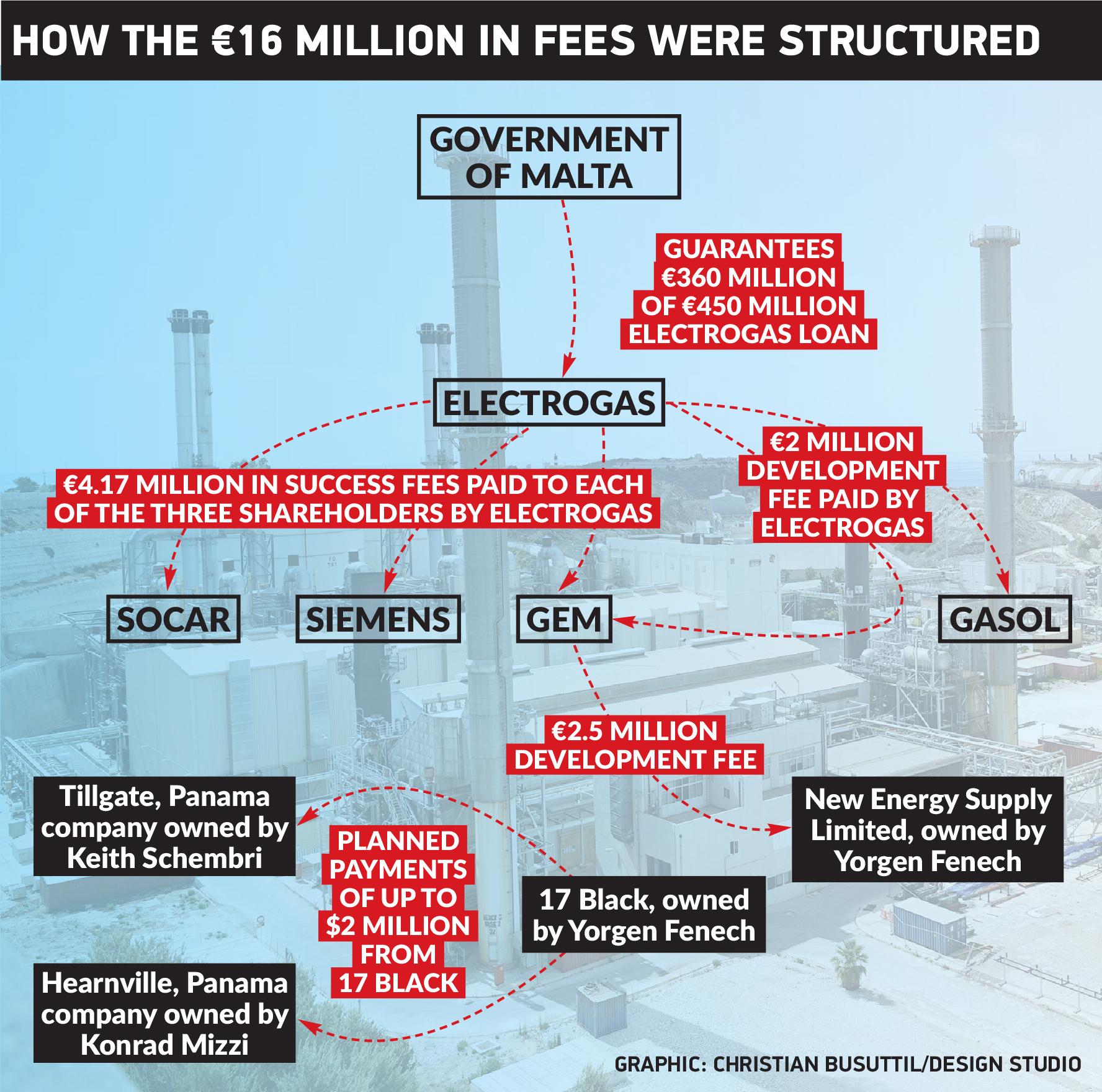 GEM Holdings and former shareholder Gasol received another €4 million in “development fees” in 2014 paid out from the Electrogas loan.

According to the agreement, GEM and New Energy Supply first started working on developing the power station project in 2007, but the PN government “did not proceed with the project at that time”.

The Malta Business Registry shows, however, that New Energy Supply was incorporated seven years later, in May 2014.

According to the project services agreement, GEM restarted the project in January 2013 and formed a consortium with Socar Trading, Gasol and Siemens.

That same month, then Opposition leader Joseph Muscat had vowed to personally take charge of the power station project’s implementation when the intent to build a gas-fired plant was publicly announced by his party.

Apap Bologna, Gasan and Fenech have all denied reaching a deal with Labour before the March 2013 election to build the power station.

Fees not destined for Schembri or Mizzi - GEM

Electrogas records show that invoices for the success fees were sent to Electrogas by GEM, Socar Trading and Siemens in June and July 2015.

Each of the consortium members was paid €4.17 million in such fees.

In one e-mail dated July 2015, Fenech told the other Electrogas directors and a senior Electrogas employee that the €12.5 in success fees should be referred to as a “development fee”.

“[Name withheld] it is important to refer to it that way even in electrogas records,” Fenech wrote. 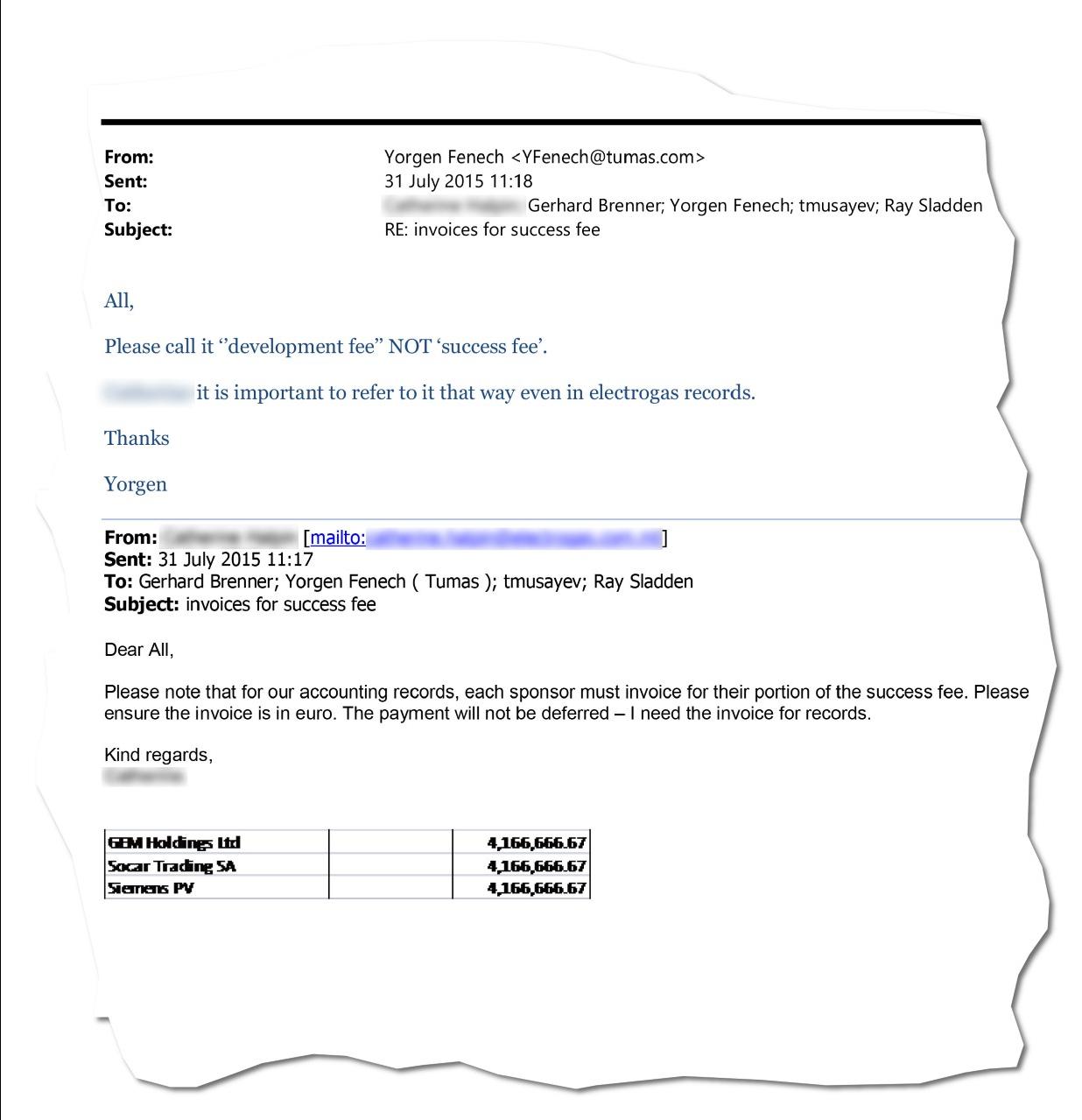 The e-mail sent by Fenech about the success fees.

A December 2015 e-mail authored by Nexia BT indicated that the company 17 Black, owned by Fenech, would pay up to $2 million into Schembri’s and Mizzi’s offshore structures.

Schembri and Mizzi deny ever planning to receive any kickbacks from the project.

A freeze was put on Nexia BT’s assets last month as part of a probe into passport kickback claims.

Nexia BT’s managing partner Brian Tonna sat on one of the Enemalta committees that chose Electrogas as the winning bidder for the power station project.

Contacted by Times of Malta, a spokesman for GEM said Fenech's New Energy Supply had only invoiced for €1 million of the €2.5 million in fees due to it.

The spokesman denied that the fees payable to Fenech were destined for Schembri and Mizzi when questioned by Times of Malta.

“In summary, GEM received from Electrogas a total of €6.1million in fees and paid New Energy Supply a total of €1 million. 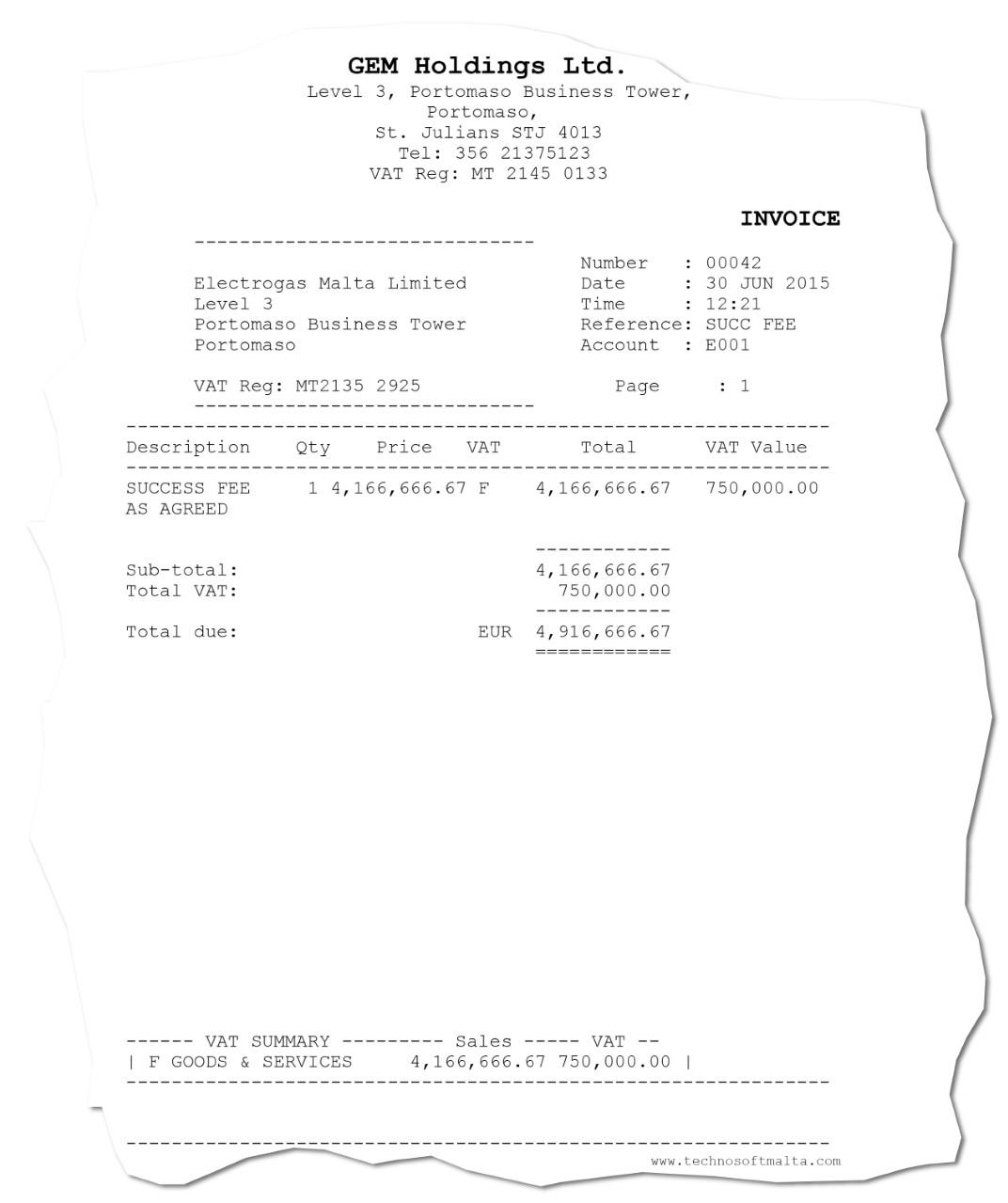 One of the success fee invoices.

Fenech's legal team denied any allegations of wrongdoing when contacted by Times of Malta.

An Electrogas spokesman told Times of Malta that the consortium members agreed between them prior to submitting the bid in 2013 that Electrogas would pay development and success fees for services relating to the formation and organisation of the consortium, preparation of the bid and in consideration for their efforts during the development phase.

“This is standard practice under large-scale power projects such as the Electrogas project and the agreements specified that such fees would only become payable if the consortium was successful in being awarded the project,” the spokesman said.

The National Audit Office has flagged several shortcomings in the process that led to Electrogas being awarded the project.

The Electrogas spokesman said the fees, totalling €16 million, were approved by the banks that lent Electrogas the money.

According to the spokesman, consortium members paid several expenses on behalf of Electrogas, including around €11 million charged by the government for the State guarantee on the loan, plus further bank guarantee fees.

These expenses were not reimbursed to the consortium members by Electrogas, hence the success fees were not retained by the shareholders but used for project expenses, the spokesman said.

The spokesman declined to comment on the “internal agreement” between GEM and NES that promised Fenech €2.5million for the project development.

The spokesman reiterated that it had engaged a reputable international law firm to conduct extensive legal and forensic audit reviews, and no evidence of any wrongdoing was found during the bidding stage, construction of the power plant and the operation activities of Electrogas.

In a statement, the Nationalist Party said this confirmed the urgent need for a public inquiry on the Electrogas power station as was being requested by the Opposition in a motion.

It said that Prime Minister Robert Abela has not yet said anything about the motion and his silence was confirmation that he was complicit with Joseph Muscat, Keith Schembri and Konrad Mizzi.

The PN, it said, would continue to insist on the truth about the project for justice to be done with the people who were having to pay higher electricity tariffs.