More than 6,500 warning stickers have been pasted on garbage bags placed outside on the streets on the wrong day, as the country adjusts to the new waste collection schedule.

From the beginning of this year, the collection of waste became standardised after years of rubbish collection days differing across localities, with the idea of making it more practical for residents to recycle and place their garbage out more efficiently. 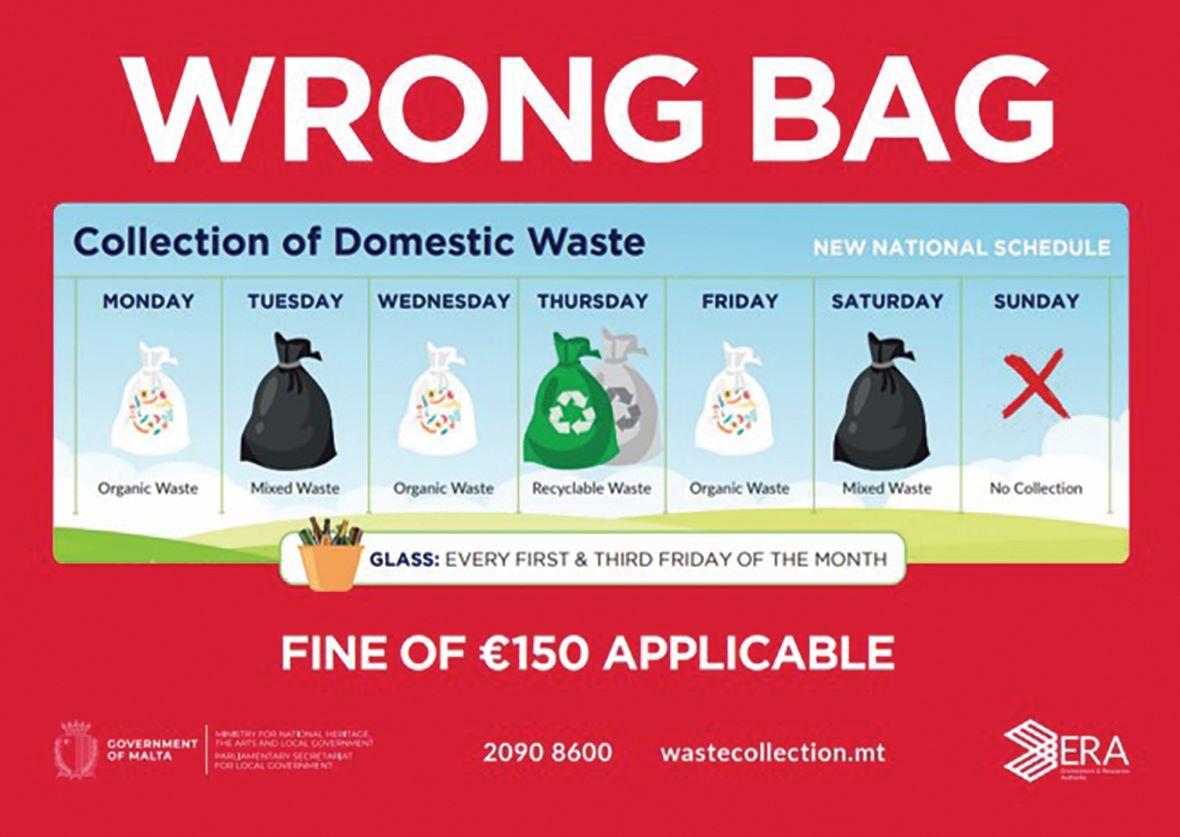 Yet, despite the numerous campaigns and flyers handed out to highlight the new system, several residents are still getting confused or refusing to adapt to the change.

Now, as part of the educational campaign relating to the new schedule, red stickers labelled ‘Wrong bag’ are being placed on bags put outside for collection on a wrong day.

Until January 18, authorities such as the Environment Resources Authority (ERA), Clean Malta and WasteServ had put over 6,500 warning stickers on waste bags found outside buildings on the wrong day.

“This awareness initiative will continue in the coming weeks, along with a nationwide information campaign,” an ERA spokesperson told Times of Malta.

Another exercise of placing stickers on wrong bags also took place on Friday, yet the numbers are still being collected.

The stickers include the new schedule and a warning that if residents are caught placing the wrong bag out, they could be slammed with a fine of €150.

The fine was first brought about in 2018 when the country introduced the then-new collection scheme, which saw the introduction of the separation of organic waste.

The spokesperson said no fines have been handed out so far, as the authorities are opting for a more “educational” approach for the first few weeks.

WasteServ said the majority of the population is already accustomed to the new schedule, adding that while it is too early to establish trends, the initial results so far are positive.

How much waste was collected?

A total of 502 tonnes of organic waste was collected in the first week, which results in an increase of 72 tonnes, 17 per cent, when compared to the first week of 2022.

The authority said it is not in a position to give figures for recyclable waste yet.

WasteServ said it is early days to make any like-with-like comparisons with previous periods since the BCRS scheme shifted a significant number of beverage containers from the grey/green bag to its collection system.

The Beverage Container Refund Scheme incentivises the return of single-use beverage containers by applying a refundable deposit on the sale of beverages.

Waste collection trips for all waste streams have decreased by 20 per cent in the first week of the year when compared to the collections prior to the new system.