Middle schools will resume classes on Wednesday while secondary school students will be back at their desks on Friday. Post-secondary education will remain online for the time being.

Monday, April 26:
• Non-essential shops and services reopen
• Groups of up to four people allowed in public (up from two)

No date yet for:
• Bars and restaurants
• Organised sport
• Vouchers
•Travel to Gozo

Bars and restaurants will remain closed for the time being and organised sport remains forbidden. Weddings also remain forbidden, although Abela said they may be allowed as of June 1. Decisions about these will be taken in due course, he said.

"We need to monitor the situation and be realistic about this, not give people false hope," he said.

Abela said it was too early to talk about resuming mass events, as the government was reopening "cautiously" with priority given to restoring normality in the education and health sectors. 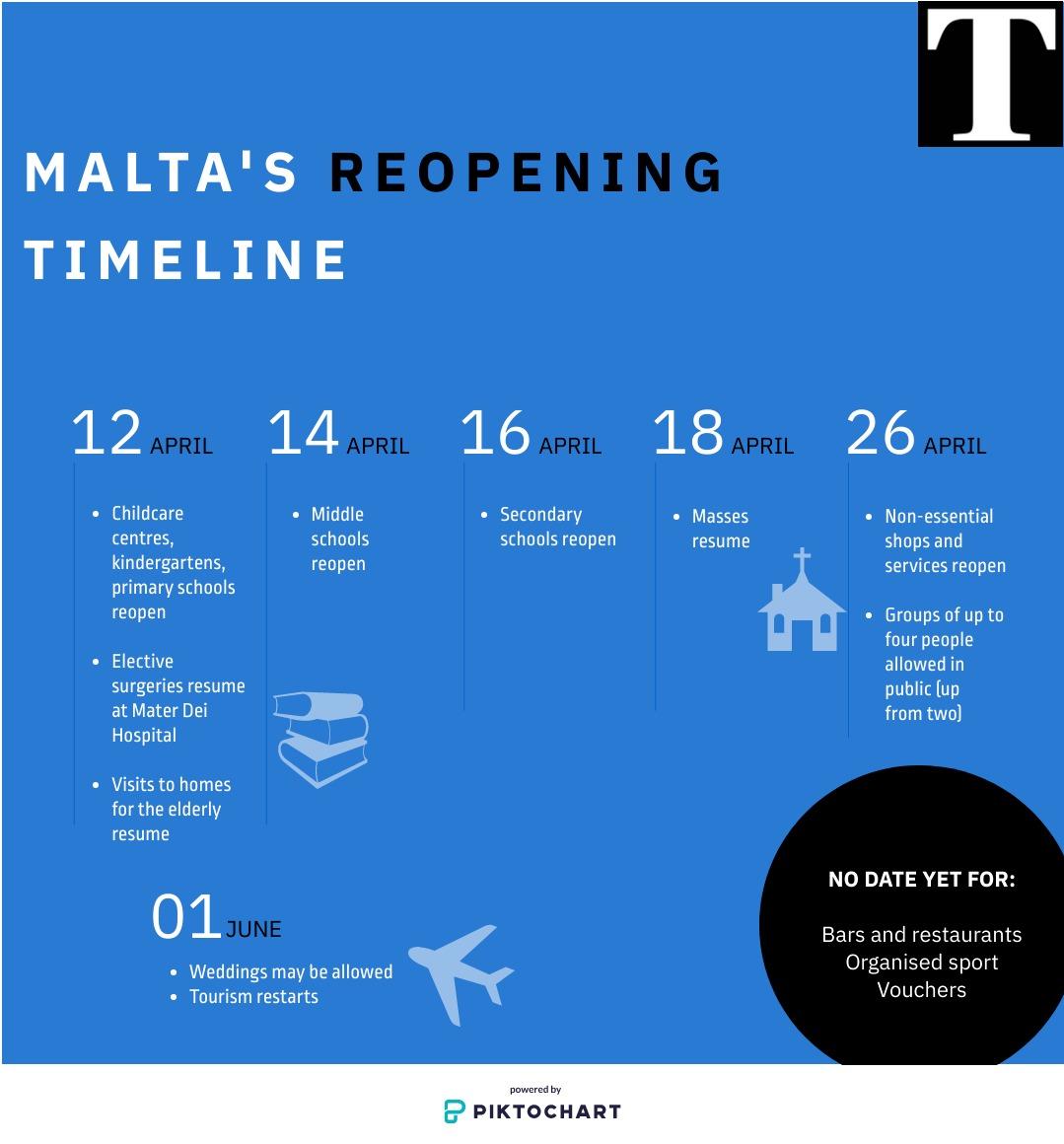 Questions asked by Times of Malta about the reopening of gyms, resumption of extracurricular activities or changes to rules about gatherings in private households were not answered.

Abela later said rules about private households would as of April 26 "revert to what they were a few weeks ago." He did not elaborate any further.

Currently, no more than two households can gather in private residences, with the police, community officers and other enforcement agencies all permitted to enter private homes on the basis of a report filed.

The prime minister announced the reopening plan during a press conference held at Castille on Wednesday morning.

Abela: measures can be reintroduced

Abela said that the reopening measures could be reversed if hospitalisation numbers were to increase once again.

“Now is not the time to relax,” he warned.

Speaking 13 months to the day since Malta first detected its first COVID-19 case, the prime minister said the reopening plan was based on key metrics including a lower number of virus cases, declining hospitalisation numbers and rising vaccination rates.

Abela told entrepreneurs that the government had faith in them and would continue to help them throughout the pandemic.

Government-issued vouchers to stimulate local spending would be issued once all shops and services were reopened, he said.

Health Minister Chris Fearne emphasised how important it was for Malta to remain on other countries’ so-called ‘green lists’ – groups of countries where people can travel to without restrictions.

Being knocked off such lists would cost Malta its tourist season this coming summer, he said.

"It is crucial that our country is seen as a safe country, otherwise it's useless reopening for tourism," he said. The government has said that it will be pumping €20 million into a plan to kickstart the tourism sector as of June.

The minister also said that Malta was preparing for so-called vaccine passports, saying that if other countries were to demand that Maltese travellers present proof of vaccination, "we will be able to provide this".

So far 42 per cent of adults have received at least one vaccine dose, he said, with that rate significantly higher among older age groups. Within homes for the elderly, 96 per cent have been vaccinated.

He said the government was aiming to have vaccinated all vulnerable people and over 60s by the end of April, with the country on track to achieve herd immunity by the end of summer.

That timetable could be accelerated if the European Medicines Authority decides that the AstraZeneca COVID-19 vaccine can be administered to the broader population. Later on Wednesday, the EMA said that blood clots should be listed as a "very rare" side effect of the AstraZeneca coronavirus vaccine.

Fearne said there were no cases of such blood clots detected locally. Malta will continue to administer the vaccine to patients aged under 70, as it has been doing, unless the EMA alters its guidance, the minister said.

Hospitalisation numbers are also down significantly, with 41 virus patients at Mater Dei Hospital as of Tuesday. In mid-March, that figure stood at a daily average of 140.

Similarly, the number of patients in intensive care has also dropped dramatically, down from a maximum of 31 in March to eight active cases as of Tuesday. In Gozo, just one patient is in intensive care, compared to five in March, Fearne said.

Public health chief Charmaine Gauci said the seven-day moving average of new COVID-19 cases is now down to 54, with the positivity rate - the percentage of tests that are positive - down to 2.6 per cent over a seven-day period.

The Malta Union of Teachers reacted to Wednesday's announcements by saying it was in favour of staggering the reopening of schools and was still in talks with Education Minister Justyne Caruana about returning to normality.

Discussions would continue in light of Wednesday's announcements, it said.

The union said last week that it is too soon to reopen classes to students, despite the vast majority of teachers having received their first vaccine dose. Teachers were bumped up the vaccination priority list in January after they went on strike for two days in protest at being made to return to classrooms after the Christmas holiday period.

Speaking on Wednesday, Fearne noted that 86 per cent of educators have so far received at least one vaccine dose. He also noted that authorities could shut down individual schools if an outbreak occurred in any single institution.

In its statement, the MUT said "hundreds" of educators had yet to receive a vaccination appointment for their first dose. The more contagious UK variant, it added, was also infecting children in greater numbers.

Fearne said on Wednesday that 76 per cent of active COVID-19 cases in the country are of the UK virus variant.

Schools, non-essential shops and services were all ordered to close for at least one month on March 10 amid a sharp rise in coronavirus cases.

Those numbers have now declined dramatically, however, with the country currently enjoying an 11-day streak of new cases in double digits and fewer active virus cases than at any point since early October.

Other restrictions introduced in March included reductions in the number of people allowed to gather in public (first down to four, currently at two), a ban on organised sports, restriction of services at hotels, a ban on religious services except for funerals and the postponement of non-urgent surgeries.