Protestors gathered in front of Castille on Saturday for the second time in less than 24 hours, again demanding Prime Minister Joseph’s Muscat’s resignation.

A noticeably sparser crowd than the previous night’s activities, a hundred or so people nonetheless gathered to urge Dr Muscat to step down in a protest organised by Moviment Graffiti. 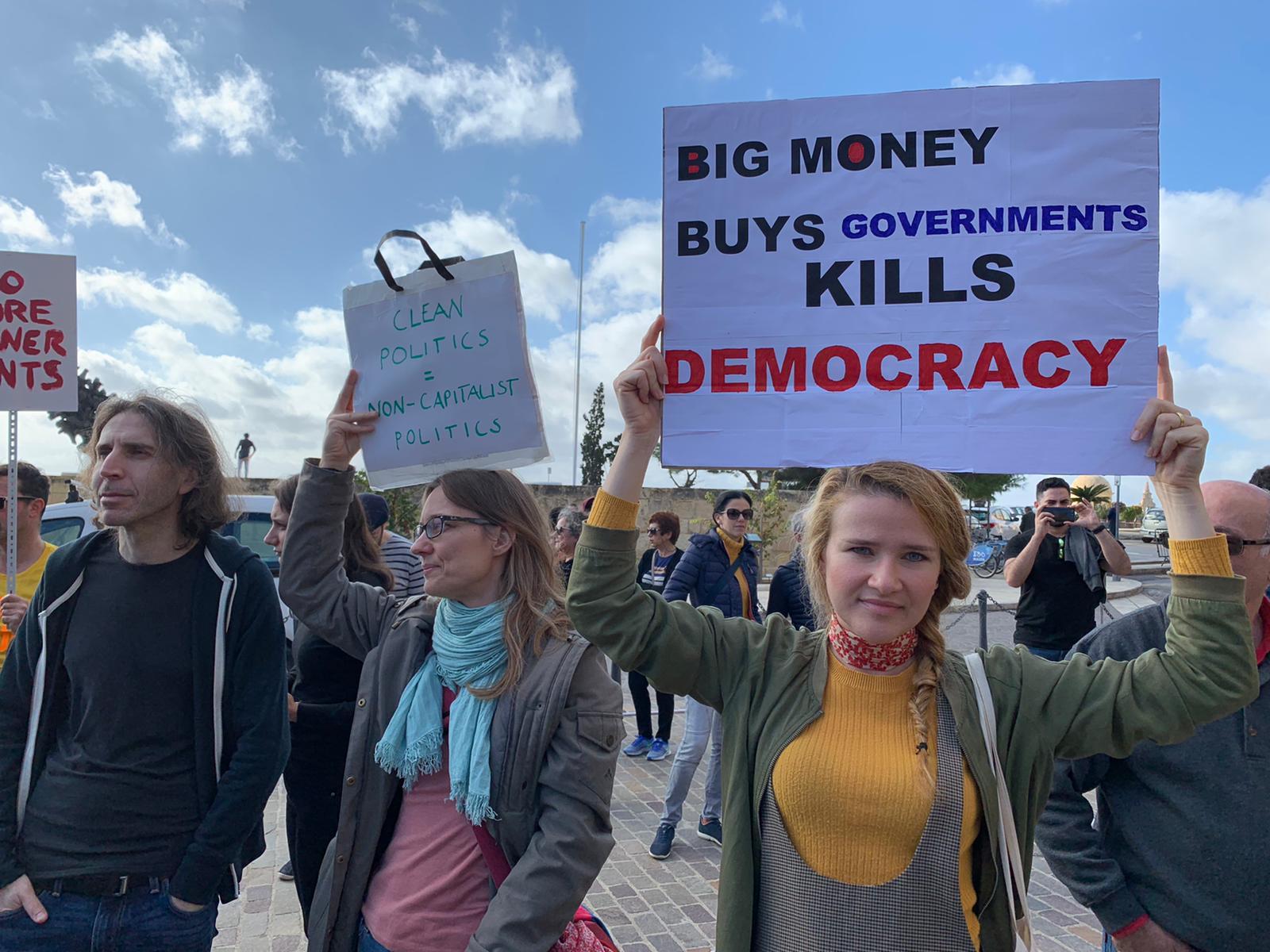 The atmosphere ahead of the protest seemed more jovial than during previous protests, with people grouping behind the statue of Manuel Dimech in high spirits.

Despite this, there was still heavy police presence, with the barriers lined up outside Castille extending much farther out into the square.

'Now is not the time for fear'

Addressing the crowd, Moviment Graffiti activist Andre Callus said there was nothing socialist, leftist or progressive about what the government had allowed to happen over the past few years, despite the fact that the Labour Party was supposed to hold true to these values.

“This was an occupation of big business that culminated in the murder of a journalist and theft of natural resources and cultural heritage that belong to us,” Mr Callus said.

“Now is not the time for fear,” Mr Callus said, “now is the time for courage and for us to make sure that out of this mess we can dig out hope for a brighter future.”

Author and activist Immanuel Mifsud noted that the crowd had gathered in a square with a long history.

He said that while usually supporters gathered to “anoint and cheer for a gilded leader” the power of people in protest had uprooted the annals of power through their anger.

“We should note that the liberal and neo-liberal experiment has failed yet again when we live in societies where some mothers have to sleep with their babies in dark garages while others go out to purchase a yacht and maybe even a second one,” Mr Mifsud said.

“We are a republic with a parliament that is only represented by two parties. Those of us who have long-abandoned the political parties of our parents have long clamored that we deserve better and that our country deserves a better system of representation.”

“We need big changes to uproot and clean up the system of power deep inside that palace. We need a new republic.”

'Find the courage to speak out'

Academic and activist Andrea Dibben said that she had never feared speaking about controversial issues but a lingering fear from this country’s dark political past had always kept her from speaking about politics.

“Today I cannot hold back what i have to say. We need to find the courage to step forward and speak about what is happening,” Dr Dibben said.

“Even if the corrupt of today leave today or tomorrow, they will be substituted by others just like them because the problem is in the relationship between the politician and the businessman,” she said.

She said images of Yorgen Fenech walking nonchalantly in Valletta and speaking to the media without shame as if he hadn’t just been accused of one of the worst crimes in Maltese History told her that “we have glorified businessmen even if they have blood on their hands, while we vilify workers, single mothers and refugees who struggle to get by”.

“If we don’t want corrupt politicians than we need to support good politicians. They need to be well compensated to destroy their dependence on big business to get elected,” Dr Dibben said.

Matthew Borg from NGO Allejanza Kontra l-Faqar said that while it was uncommon for leftist organisations to come together in this manner, when they did it was tangible evidence that results could be achieved.

He said that the wage inequality that was rampant in our country was a symptom of a pro-business policy that didn’t benefit anyone but the elites.

Moviment Graffiti activist Wayne Flask said that socialism would never permit or accept the barbarous murder of a journalist that was uncovering a reign of corruption.

Mr Flask said that secret contracts negotiating the sale of public assets needed to be investigated and if necessary revoked and called for constitutional Reform that would divorce politician’s influence on our public institutions.

Activists were also circulating a letter addressed to the Cabinet listing their grievances with the unfolding political situation and calling on the Kanpur party to clean up their act.

The letter was signed by 171 activists, artists, doctors, journalists and NGOs.

The letter is being kept open till Wednesday and the public is being invited to sign it.

On Friday night, a large crowd of protesters also gathered in Valletta in another in a series of protests organised by civil society over details emerging from the investigation into the journalist's murder.

The protest on Friday was the sixth one in 10 days.

The protest followed an impromptu gathering on Thursday held following the release of the Prime Minister’s former chief of staff Keith Schembri from arrest.