A large crowd of protesters gathered in Valletta on Friday in another in a series of protests organised by civil society over details emerging from the investigation into Daphne Caruana Galizia's murder.

The groups are on their sixth protest in 10 days, calling for Prime Minister Joseph Muscat’s resignation. 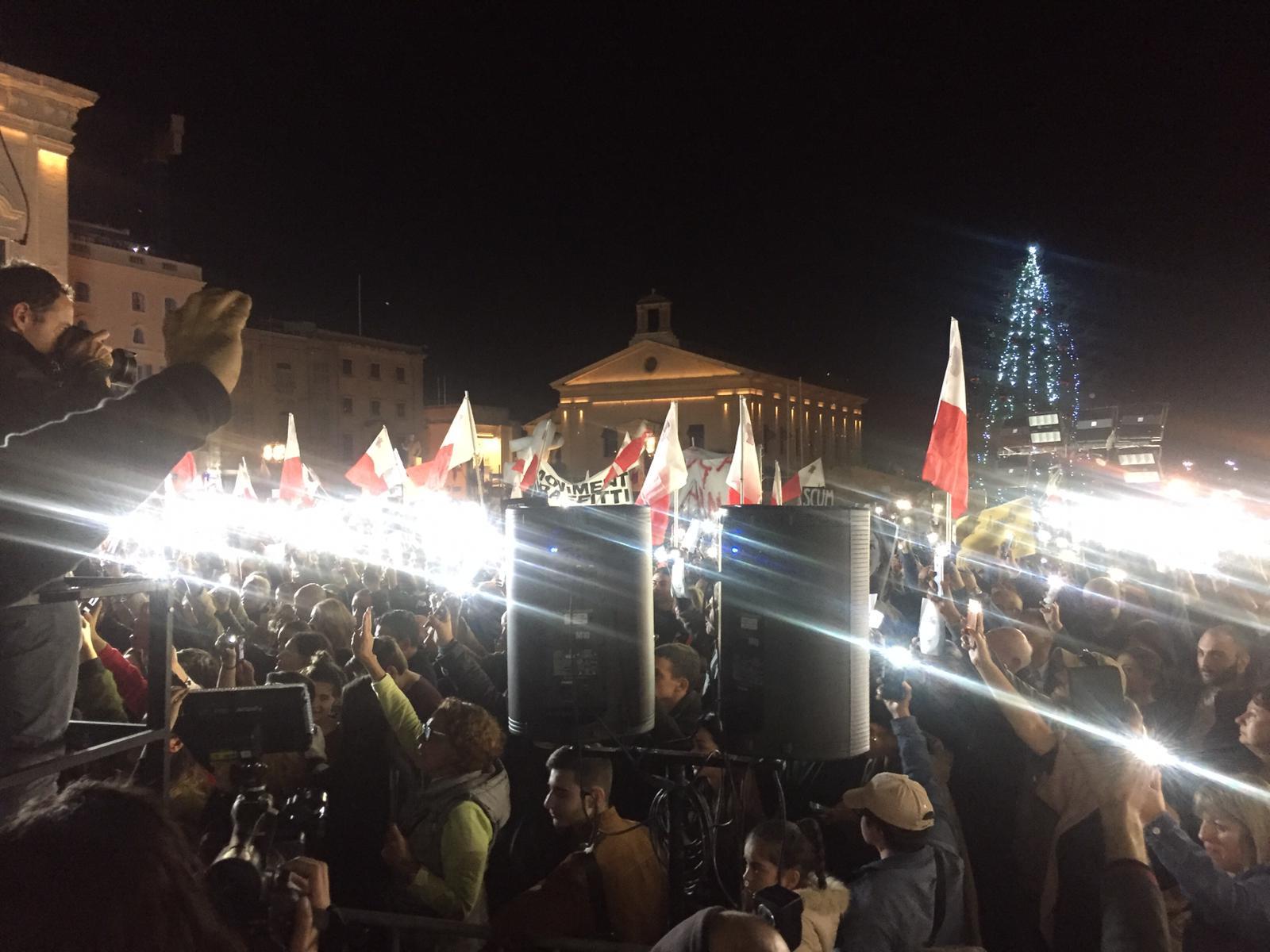 Protesters started marching around 6.30pm, carrying Maltese flags and posters in yet another protest against the way the government handled the probe.

Those present held placards reading "Gvern Mafjuż, "The Situation is Still Desperate" and "Mafia". One was seen carrying a handmade poster on a carton reading "Investigate our ‘Crime’ Minister".

Friday’s protest follows news earlier in the day that Prime Minister Joseph Muscat, who protesters have been asking to resign, would be doing so imminently.

It follows an impromptu protest on Thursday held following the release of the Prime Minister’s former chief of staff Keith Schembri from arrest.

Repubblika president Vicki Ann Cremona told Times of Malta earlier that the protest would still be held in spite of the announcement that the Prime Minister plans to step down. 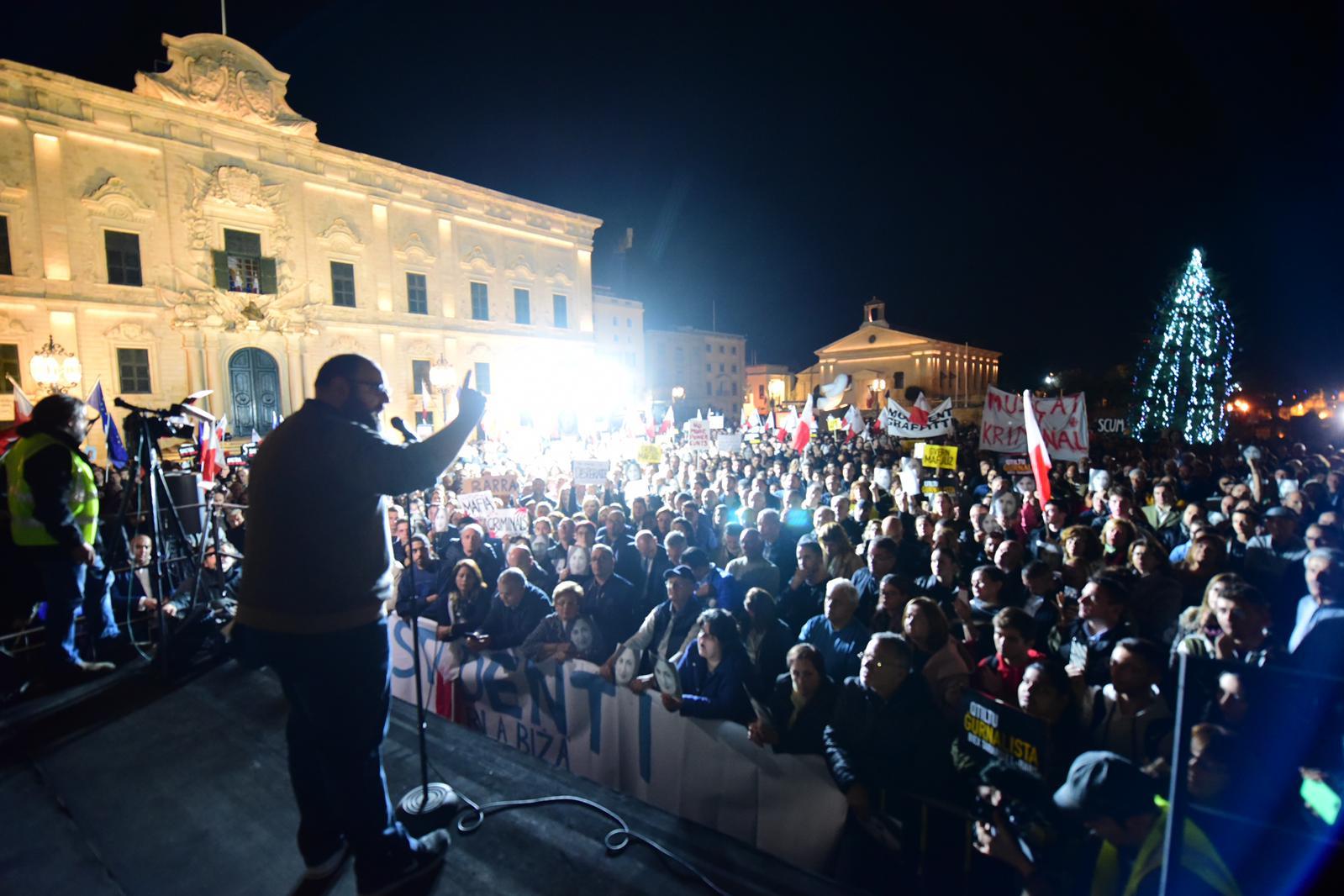 "This was because this was only the first step. There remained more to clean up in Malta," she said.

Sergio, 31, from Spain, as well as his companion, a 28-year-old man from Brazil, who have been living in Malta for a year, said that in their respective countries people were not so passive and demonstrations of this nature were regularly attended by many thousands of people.

“It’s crazy that the prime minister has these kinds of relationships with murderers. It’s like a mafia state. He should resign as soon as possible.”

“Right now the fact that he (the Prime Minister) is going to be resigning is a good start, but it does not stop here,” a 28-year-old woman told Times of Malta. 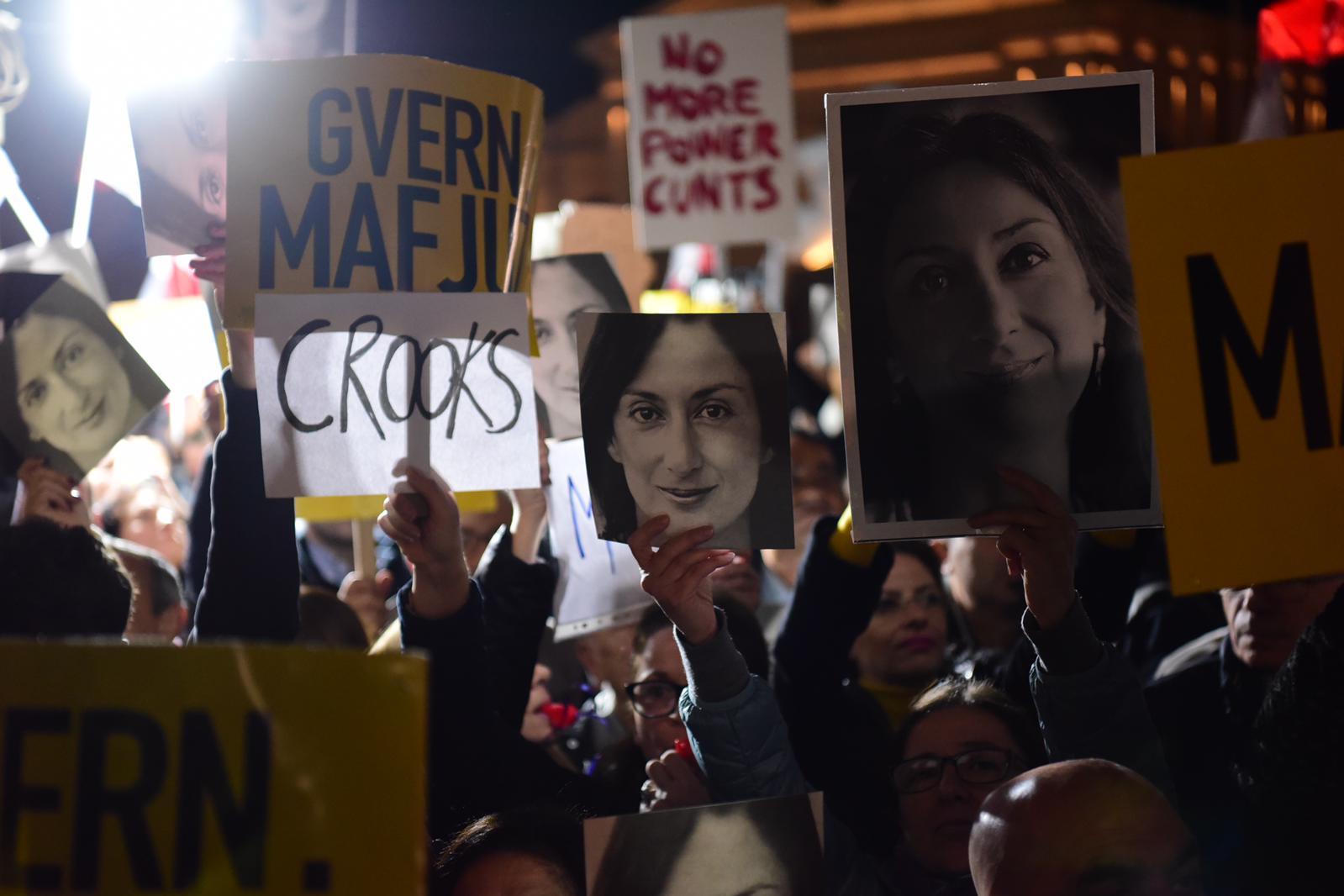 33-year-old Jean, cradling his toddler daughter and holding a Maltese flag, said that while it was challenging, his family had not missed a single one in the series of demonstrations.

“We’ve been following the media but at a certain point we thought we cannot just sit back and watch we have to take a stand.

“Some people have told us a protest is no place for children but even at her age, children need to be taught what is worth fighting for,” he said.

Wit and humour were not absent with some protesters handing out "Get out of jail free" Monopoly cards.

Friday's protest is organised by Repubblika, Occupy Justice and manueldelia.com. When it ended, the crowd switched on their phone lights and sung the national anthem.

Following the protest, during which speeches were given by Josef Vella, Manuel Delia and Ms Caruana Galizia's niece Amy Mallia, a small crowd gathered in front of the Daphne memorial beneath the Great Siege Monument where they placed flowers and candles. 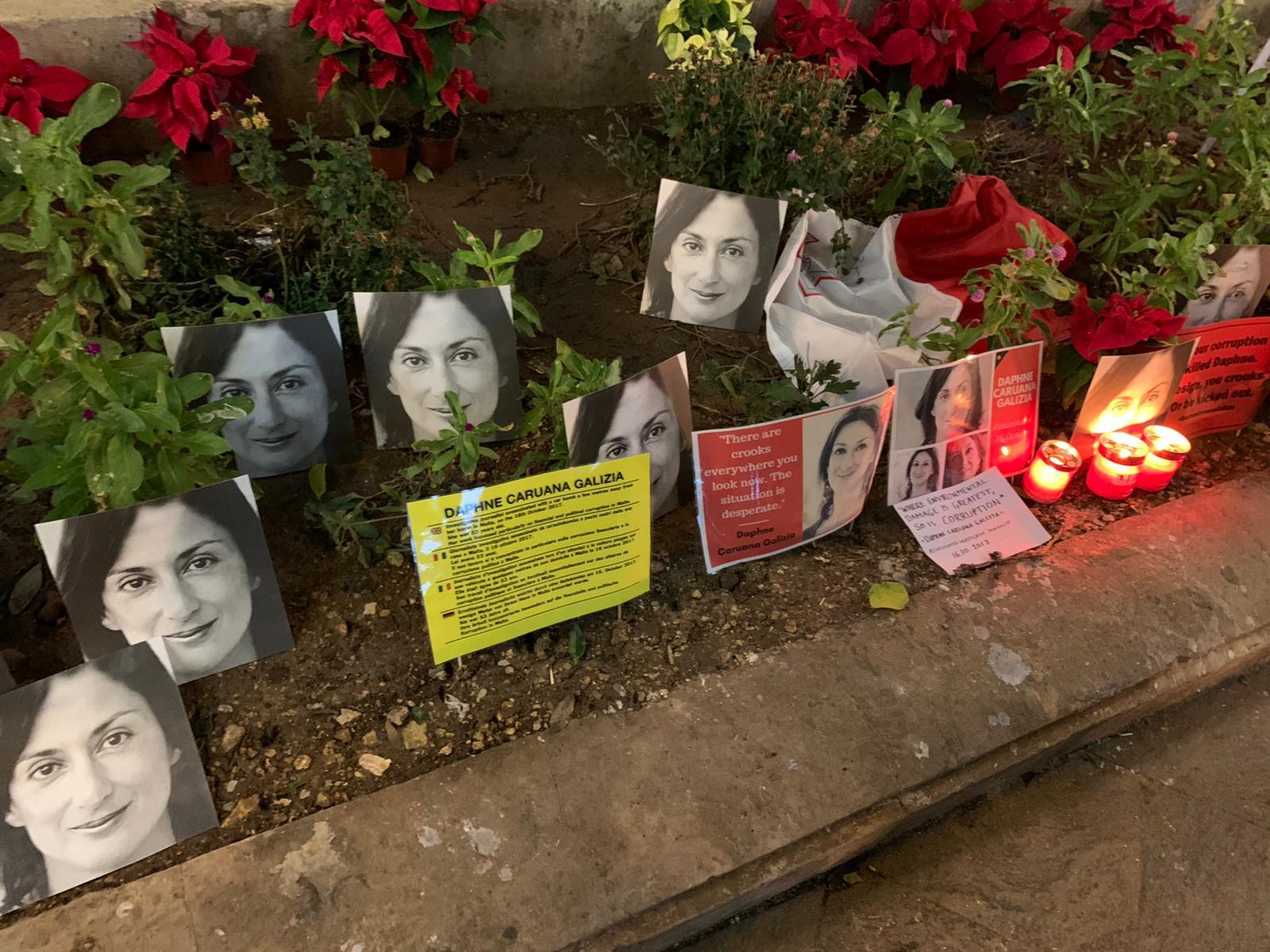 Graffitti is holding another protest on Saturday. 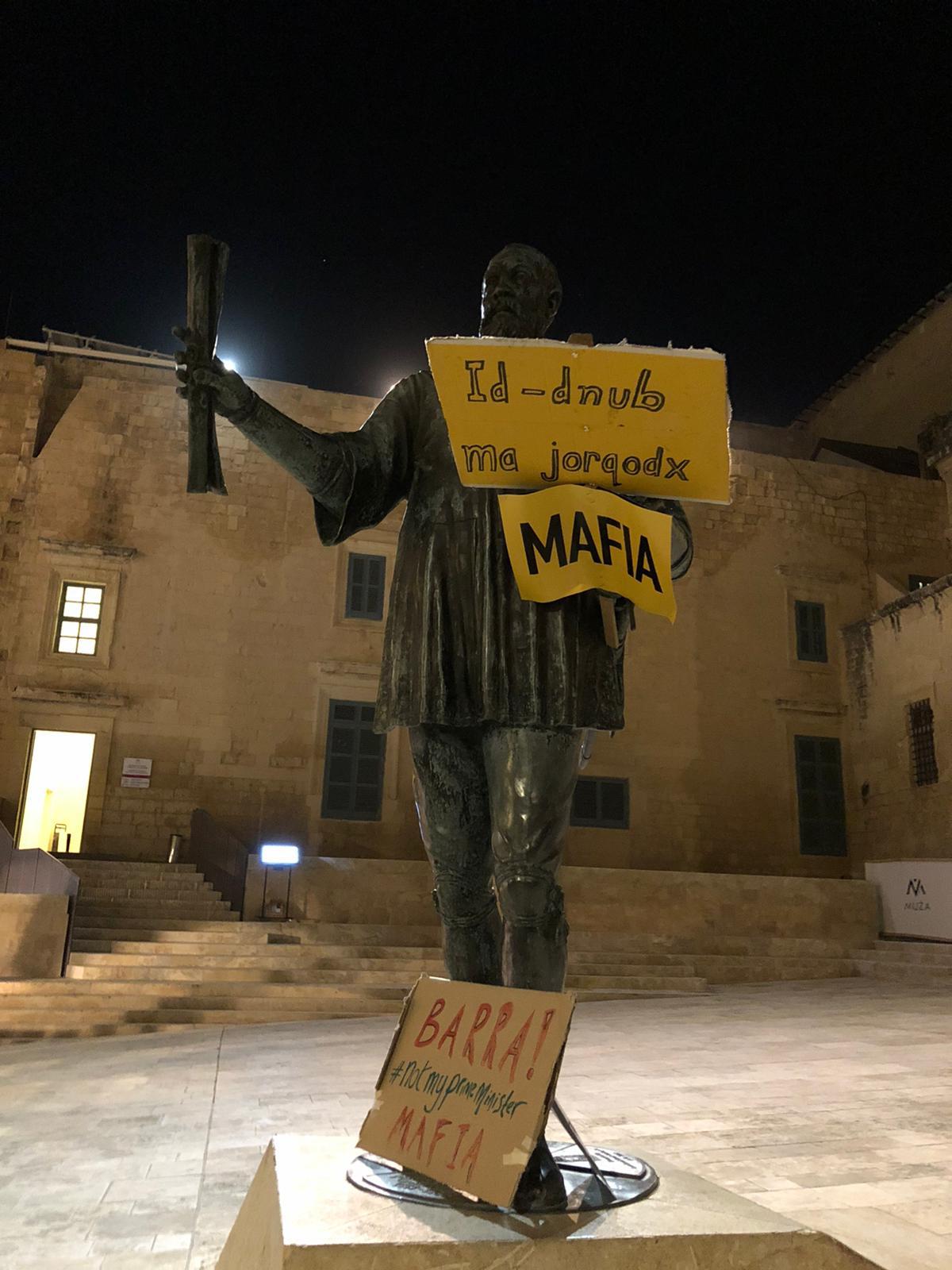