The owner of the popular nightclub Nordic Bar said he is investigating claims that its bouncers kicked out and beat two women for sharing a kiss.

"We are carrying out our own investigations on the matter as well as collaborating with the police. This is a very serious matter," the owner told Times of Malta adding that he would not be saying more until investigations are concluded.

The Malta Gay Rights Movement (MGRM) first flagged the issue after a woman recounted her “horrendous experience” at the bar on a Facebook group on Monday evening.

The woman said that once she and her partner were at the bar, they were asked to sit by the table due to COVID-19 restrictions.

“We shared a kiss and soon enough one of the bouncers came to our table to kick us out,” the woman said. She said that as she and her partner were not sure why they were being thrown out, they both resisted and asked for a reason.

But the bouncer threw both of them to the ground and kicked them as he held them down, she said.

She added that she was “disgusted” by the way they were treated and that she had never experienced such homophobic abuse before.

In a survey, MGRM had found that half of the LGBTQ+ community find Paceville unsafe, and that many have experienced aggression from bouncers.

“At this point we advice the community not to go to this venue unless action is taken that guarantees our safety,” MGRM said in a Facebook post. The NGO said it will accompany anyone to a police station if they have been victims of abuse and will also offer free legal service and follow-ups.

Many other activists also called out the behaviour of the club.

Allied Rainbows Community manager Clayton Mercieca said the bar could not shake off the responsibility by saying it did not employ the bouncers directly. "You are responsible for anyone working within your club/bar," he said.

MEP Cyrus Engerer, who led a pilot resolution in the European Parliament condemning Hungary's LGBTIQ law, said that he had seen a rise in homophobic violence in Malta in the past weeks.

"We have the best laws in Europe, yet hate is still strong and present," he pointed out. 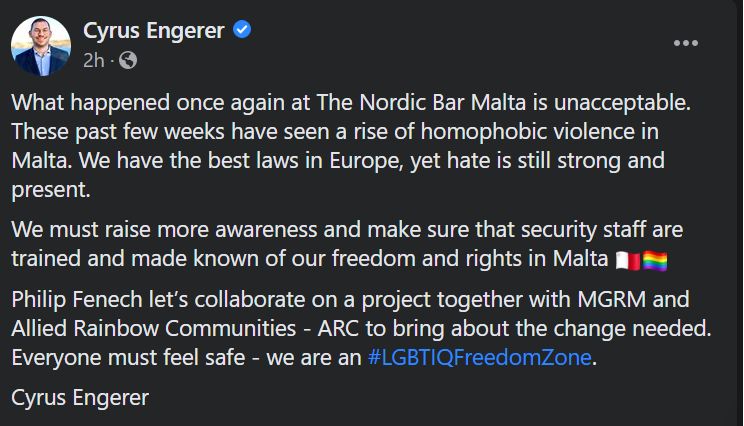