Last updated with reactions at 11.57am

The death of a woman, buried under the debris of her own home in what appears to have been the most serious of a spate of construction-industry incidents sparked a wave of anger, but did not surprise the nation on Tuesday.

Miriam Pace, a 54-year-old wife and mother of two, was found dead late on Monday amid the debris of her house in Ħamrun, some eight hours after the structure collapsed into a next-door site which was being excavated.

It was the most serious of a string of such incidents which last year saw the government rush in new regulations in a bid to prevent a repetition, or worse.

But those regulations started being criticised before the ink on them had dried, and some were quick to return to that criticism.

Infrastructure Minister Ian Borg, who moved last year's reform in parliament, was slammed on Tuesday for criticising those who, he said, were trying to profit from the tragedy 'possibly to win a vote'. 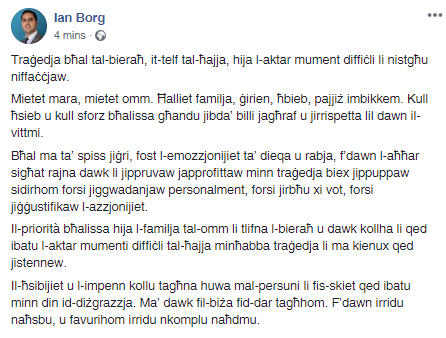 “This was a death which should never have happened. It could have been avoided,” Jason Azzopardi, shadow minister for the environment said on Facebook.

“Whoever moved the 2019 law reduced, rather than improved, the obligations on those involved in demolition and construction. This tragedy happened because when we warned them of the situation they ridiculed us. They ignored us, because they did not want to upset those who have covered Malta in concrete, lest they lose the bribery money in their pockets.”

Today’s tragedy is your political responsibility @followianborg & the result of you cutting corners inspite of warnings last year by several, including myself, that the Regulations MUST REQUIRE geological surveys! But you had ridiculed us @PNmalta @repubblikaMT @ActivistsMalta pic.twitter.com/EQToM1DD3S

“Saddened by the loss of life. Yet, angered by the greed that has brought about this horrible episode! Rest in peace Miriam. Prayers & thoughts are with her family in this difficult time. What next?”

Geologist Peter Gatt pointed out how a 2016 legal notice had made a geological investigation obligatory prior to excavation works, but this requirement was removed last year.

“Clearly,” he wrote, “this was a move (wanted by some periti) in the wrong direction.”

He explained that the site of the tragic building collapse lies at the interface between the lower globigerina and middle globigerina members This should have rang alarm bells for the developer.

“Instead the perit (architect) decided not to carry out a serious geological investigation” as permitted by last year’s legal notice, he wrote.

Infrastructure Minister Ian Borg, who was the minister who moved the revamped building regulations in parliament last year, reacted to the criticism, saying the priority now was to help the victim's family.

Environment NGO Flimkien Ghal Ambjent Aħjar said this was the result of years of encouragement of over-development, non-existent enforcement and weak building regulations to pander to the construction lobby.  In this case, the development consisting of two basement floors, several shops and some 54 apartments on six floors. This was completely out of proportion with the surrounding area of one and two-storey buildings. What's more it replaced a beautiful garden filled with mature trees and two large wells dating to before 1906, which garden acted as a green lung for the surrounding streets. 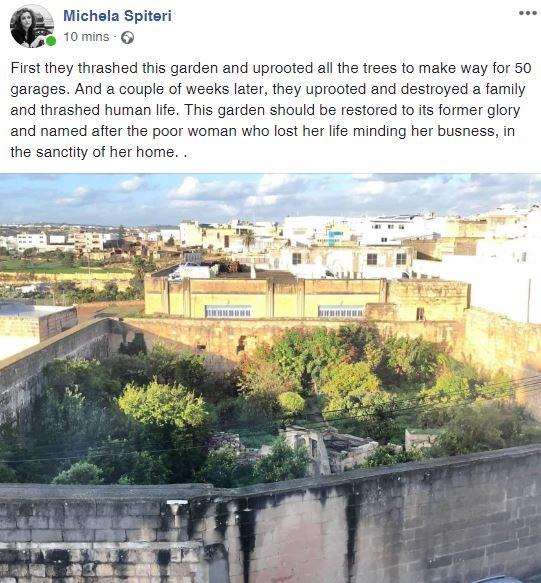 Activist Wayne Flask from the Graffitti Movement echoed the sentiments of many when he said it was pitiful to know someone has lost his wife and home because of the greed, incompetence and carelessness of somebody else.

Truly horrific day with a sad and senseless ending after a body is found in the Ħamrun house collapse. After all the warnings last year, this should not have happened. What will it take to make sure people feel safe in their homes? #Malta https://t.co/ZjFdpYNRmJ 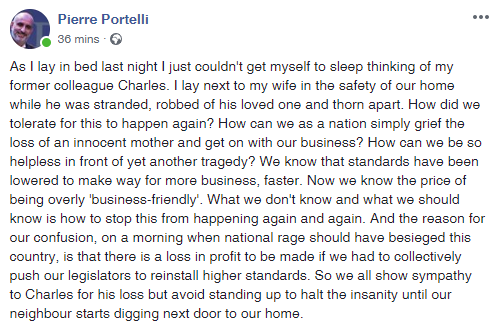 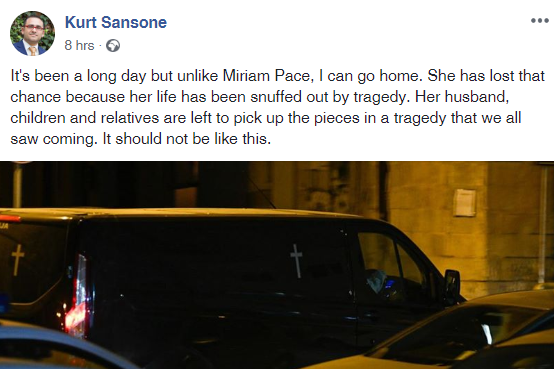 Civil society group Repubblika said it would hold a silent protest on Tuesday at 7pm near the site of the tragedy.

"Today's sadness needs to become anger. Somebody is responsible for this murder. We want justice. We do not want any more deaths," the group said.