Daphne Caruana Galizia told her son she would be back soon and that he would be able to use her car, just minutes before she was assassinated.

Matthew Caruana Galizia testified in detail on Tuesday morning about his mother’s murder outside their family home in Bidnija on October 16, 2017.

Tracing the events of that “normal morning”, the witness testified in the presence of one of his mother’s alleged murderers and three other suspects charged with supplying the bomb that killed her.

Caruana Galizia, who has already had to relive those horrific scenes on numerous other occasions in court, this time took the stand in ongoing proceedings against Ta’ Maksar brothers, Robert and Adrian Agius, their alleged associate Jamie Vella and George Degiorgio, one of the hitmen who allegedly planted and activated the bomb used to kill Daphne.

Robert Agius and Jamie Vella are accused of supplying the bomb that killed Daphne Caruana Galizia. Degiorgio is facing separate proceedings on the same case.

Adrian Agius is accused of masterminding the murder of lawyer Carmel Chircop, while Vella and Degiorgio are charged with carrying out the murder.

It had been a routine Monday morning for the mother and son who at the time were working closely together on the late journalist’s investigations into the Electrogas power station deal.

Matthew said he woke up before his mother who had worked late into the night, setting up his laptop at their large dining table where the pair usually operated from.

At the time, he had left his Paris-based office and was working from the family home, with the objective of assisting the journalist in her investigative work.

But that morning he was bombarded with requests from his job at the International Consortium of Investigative Journalists and was focusing on that, ahead of a virtual meeting with colleagues later in the afternoon.

It was shortly before 3pm when Daphne left his side, went downstairs, changed and headed out on her errand, calling out to her son on her way out, “Ok. I’ll be back later and then you can use the car.”

During his stay on the island, they were sharing a small Peugeot model which his mother had rented from Percius car hire.

Minutes later he heard his mother come back because she needed money.

“She had forgotten her cheque book or rather my father’s cheque book,” explained Matthew, adding that his mother’s accounts had been frozen by a garnishee order issued upon the request of former minister Chris Cardona in libel proceedings against the journalist.

“She left again and then I heard the explosion. It was very loud. I immediately knew that it was an explosion. I ran out.” 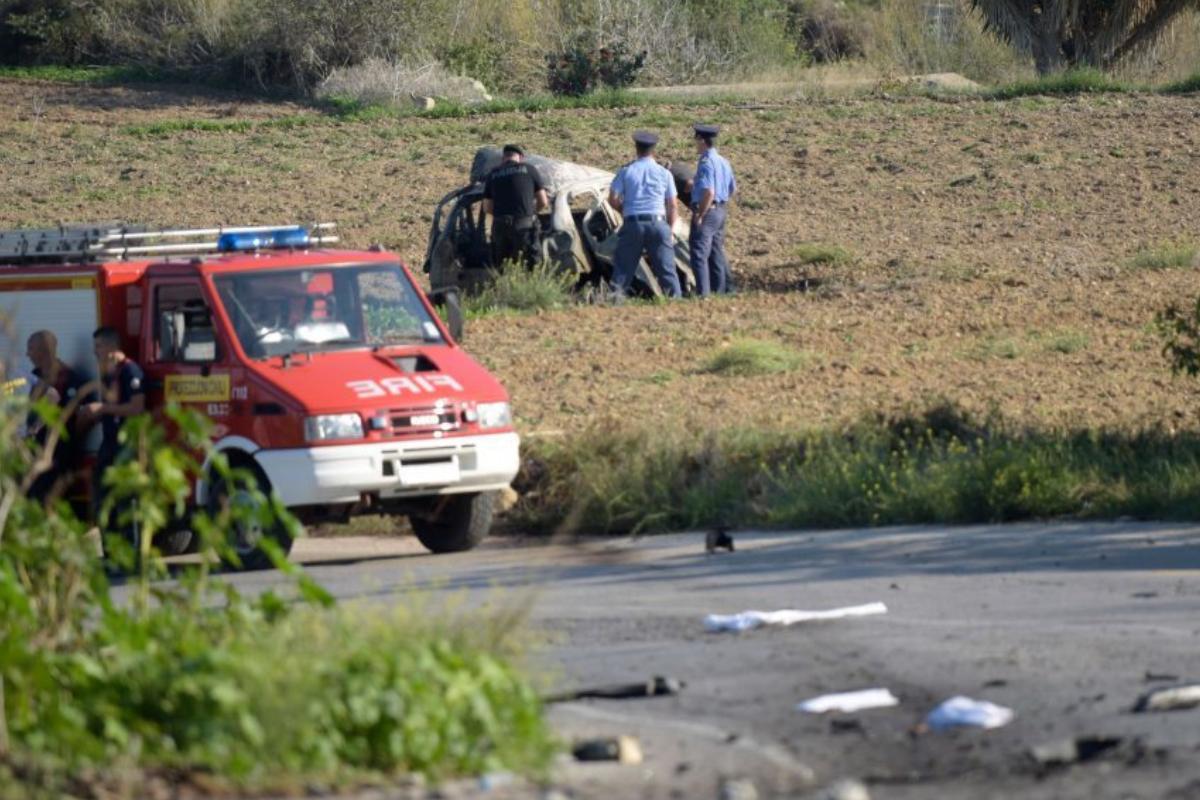 An elderly French couple living next door called out to him as he ran out.

“I don’t know,” he replied, as he ran down the road in the direction of Mosta, catching sight of a large, grey billowing cloud of smoke rising from the valley.

“I couldn’t see the source,” he continued.

He then spotted a car in the middle of the road and kept running.

Soon he saw the fire, “patches of road were on fire”, he said, recalling pieces of metal and other fragments scattered on the road surface and a small tree also on fire.

“Then I saw pieces of flesh on the ground. I was somewhat confused. I couldn’t see the car,” he explained.

That was until he saw the large ball of fire in the field.

Approaching the burning vehicle, he managed to make out the first two letters of the number plate.

“There’s no way anyone could have survived this. Then I saw a leg blown off at the knee. I could hear the car horn blaring,” he added.

That was when he had suddenly noticed a woman standing in the road calling out to him as she held a crying girl by the hand.

“What do we do?” the stranger asked.

“Call the police,” he replied.

When two young officers turned up, the fire was still raging and they soon gave up trying to put out the blaze with their fire extinguisher.

“The fire is too big. We can’t do anything,” said the officers as they tried to calm down the victim’s son.

As he sat by the roadside, Matthew tried to get hold of family members on the phone, starting off with his father, then his younger brothers Andrew and then Paul. 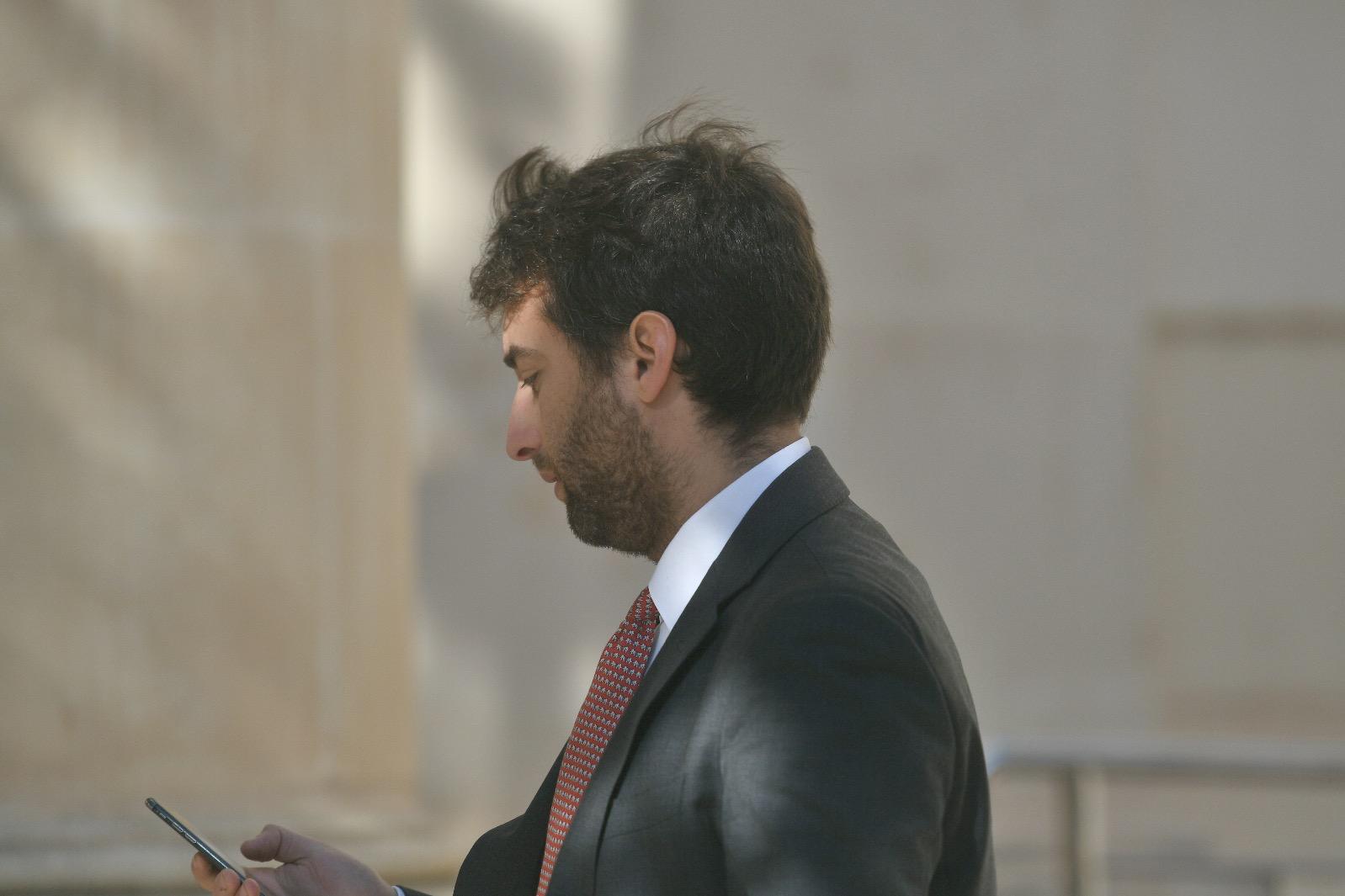 Matthew Caruana Galizia returns to court on Tuesday to testify again about the day his mother was murdered. Photo: Jonathan Borg

He finally managed to get through to his mother’s sister, Corinne, who was among the first at the scene of the explosion.

“That’s all I remember,” finished off the witness.

Asked by lawyer George Camilleri representing the Attorney General, about the work he was doing with his mother at the time, Caruana Galizia explained that on that Monday he had been contacting colleagues in view of the looming Paradise Papers publication.

He recalled telling his colleagues that his mother had just been killed.

Asked about his mother’s demeanor at the time, he said that she was rather stressed since she was being continuously threatened.

“But it was something she had grown used to live with. That day she was normally stressed,” he recalled.

“She only appeared flustered because she had to go to the bank, but otherwise it was a normal day of work together,” Matthew concluded, as he wrapped up his first-hand account.

Lawyers Alfred Abela and Rene’ Darmanin are counsel to the Agius brothers and Vella, while lawyer William Cuschieri is counsel to Degiorgio.