Free public transportation that runs on electric vehicles and more widespread installation of photovoltaic panel energy systems are among the measures that feature in Malta’s first 30-year strategy to develop a low-carbon economy.

The ‘Malta Low Carbon Development Strategy’ was launched for public consultation on Tuesday.

It identifies the island’s pathway towards climate neutrality by 2050 - a target set by the European Union - by identifying areas across the main sectors of the Maltese economy where carbon emissions can be reduced.

Around 33 per cent of Malta's emissions come from road transportation, making it the country's most polluting sector together with the energy one. An initial test of an electric public bus began in early 2020, with plans also under way to provide driverless electric buses on some routes that are free of vehicular traffic.

Farrugia said that the government has a strong economic vision, based on five pillars announced by Prime Minister Robert Abela, one of which is the environment.

“As an island, we face a number of challenges, due to our dense population and service-based economy, which limits our potential to reduce emissions, but we are working to ensure that Malta reaches the national 2030 climate target.”

One of Malta’s goals to achieve by 2030 is to reduce its greenhouse gas emissions by 19 per cent when compared to 2005. The 2030 climate target is for the EU to cut emissions by at least 55 per cent in the next nine years.

“With the Low Carbon Development Strategy, the government will continue gaining ground and set decarbonisation pathways for the next 30 years and to ensure carbon emissions reductions across the main sectors of the economy,” he said. 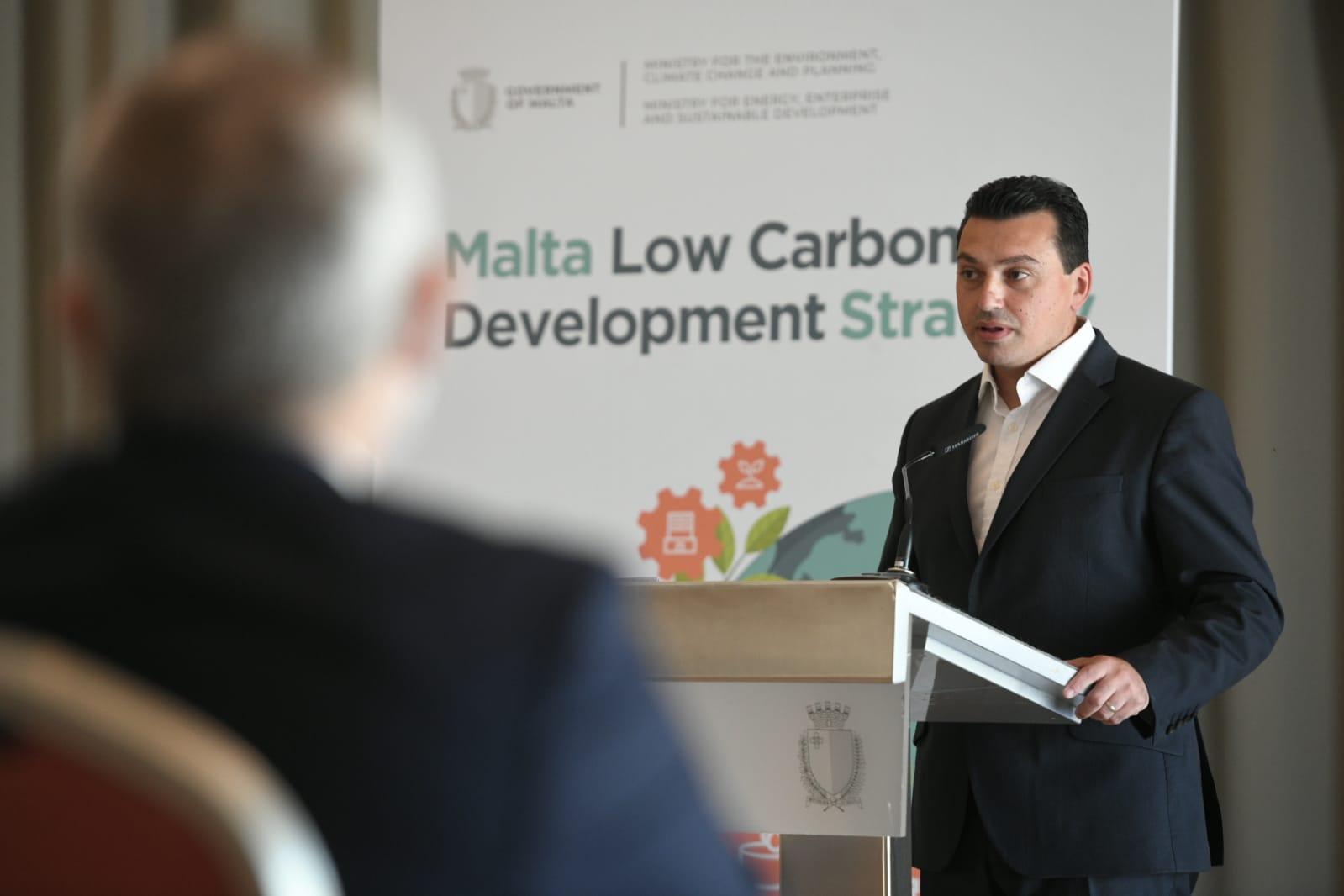 He said that the transition to a greener and carbon-neutral economy for Malta will ‘pump’ new life into the island's future, and the government will continue to invest substantially in the process to ensure all measures implemented will remain.

“We are not only reshaping our mobility, energy, waste and building sectors into more sustainable ones, but we are looking into investing in greener jobs, digital technologies and low carbon innovation opportunities,” Farrugia said.

• Electrification of vehicles and a plan to increase public electric vehicle charging points;

• Increased use of active transport methods such as e-bikes and remote working;

• Schemes for deep renovation, with energy-efficient renovations of public buildings;

• Pre-sorting waste ahead of incineration and capturing biowaste 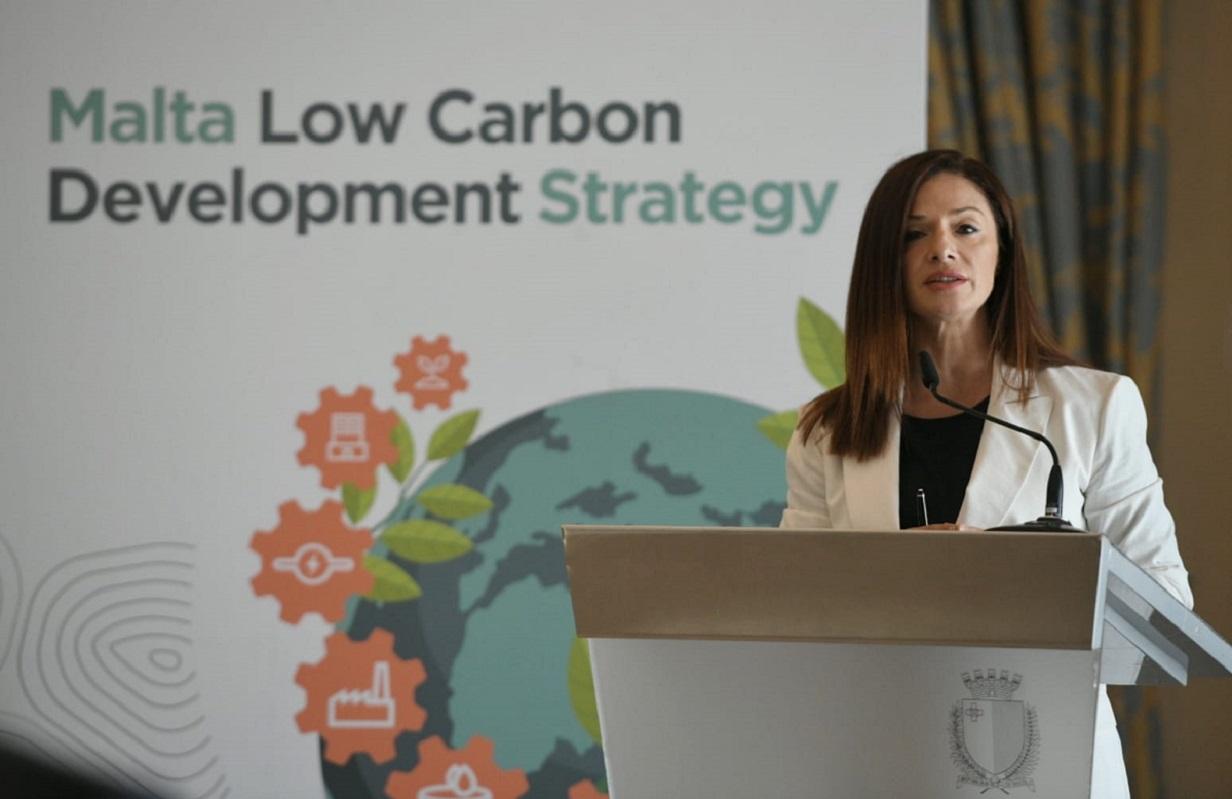 Public to say when ICE vehicles should stop being imported

Energy Minister Miriam Dalli used the launch to present a green paper that solicits the public's views on when the sale of new petrol and diesel vehicles should be banned.

The government has been pledging to announce a cutoff date for such vehicles since at least 2018, but that pledge has remained unfulfilled.

The green paper ‘Towards Cleaner Vehicles on our Road’, launched on Tuesday, now asks the public to have its say on the matter.

“The green paper includes a number of questions for the general public regarding vehicle road access, improvement of air quality and most importantly, asking for the public’s opinion for when Internal Combustion Engine (ICE) vehicles should stop being imported," Dalli said.

She said that knowing a cut-off date for the importation of petrol or diesel engine cars is an important policy decision which gives a clearer path for the transformation of the road transport sector.

She assured that once a cut-off date is decided, this does not mean that people with petrol or diesel engine cars must scrap them.

"The cut off date means that people will no longer be able to import these types of cars in our country and we want the public to be involved in this important decision," Dalli said.

Stakeholders and the public in general are being invited to submit their comments by 13th July 2021 on Low Carbon Development Strategy - consultations@mecp.org.mt and Green Paper Towards Cleaner Vehicles on our Roads – info@cleanervehicles.gov.mt.