Daphne Caruana Galizia murder suspect Vince Muscat’s family have slammed a six-month “delay” for a new potential presidential pardon that is believed could seriously implicate others, including prominent figures, in criminal activity.

Sitting for an interview with Times of Malta, accompanied by Muscat’s legal aid lawyer Marc Sant, the family member, who requested not to be named, questioned to what extent the police were acting on the suspect’s information.

Muscat, known as il-Koħħu, was arrested and charged with carrying out the bomb plot in December 2017, along with brothers Alfred and George Degiorgio.

He also faces a separate trial for his alleged involvement in the failed 2010 HSBC heist, which ended in a violent shootout with police.

Since January, Muscat has sat down for 15 hours’ worth of taped conversations with investigators, walking them through various unresolved crimes, ranging from Caruana Galizia’s assassination to other murders and robberies.

His lawyer admits that while some elements of his client’s information on the Caruana Galizia case is based on hearsay, other information in this and other cases is based on first-hand knowledge.

Having convinced Muscat to cooperate with the police, the family member says the responsibility weighs heavily on all of them, particularly given the risks involved.

“The police are always telling us they will act next week. Next week never comes. If this pardon is rejected, we will contact all the families of the victims in the cases he spoke about, and we will file a huge judicial protest.”

As the clock continues to tick, the family member says Muscat feels like he has been used by the police since 2018.

“He took a risk, he spoke up. Now everyone knows. Just a week after he spoke to the police in 2018, the Degiorgio brothers knew the details from inside Corradino Correctional Facility. It is not easy speaking up. While you are being detained, your family is on the outside. People you are ready to name are on the outside too. It is not easy at all.” 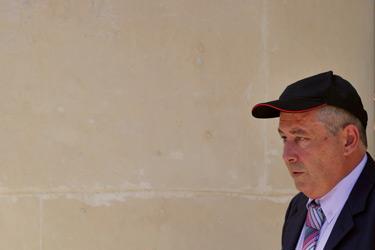 Vincent Muscat, along with Alfred and George Degiorgio brothers, stands accused of the murder of Daphne Caruana Galizia.

Last November, self-confessed middleman Melvin Theuma was given a pardon in exchange for testimony implicating businessman Yorgen Fenech as the man who ordered the killing.

From recordings and testimony since given by Theuma since his arrest, both the self-confessed middleman and suspected mastermind Yorgen Fenech knew about Muscat’s pardon request in April 2018.

“The police got to the point thanks to Vince. He gave them the information about Melvin Theuma,” the family member insisted.

However, investigators have always maintained they were already following the middleman’s trail when Muscat started offering up information on Theuma.

Since then, Muscat’s family have convinced him to cooperate with the police by offering up any knowledge he has about past crimes.

“Until October 2019 the police continued to tell him that the keys to his prison cell remained in his hands. In fact, the investigators confirmed that the refusal for the first pardon was never formally given by the then prime minister,” the family member said.

As talks about Muscat’s testimony in exchange for immunity continued to progress, the police asked his lawyer Marc Sant to compile a list of all the cases his client would provide information about.

Sant says his client has spoken to the police in detail about the Caruana Galizia assassination and a number of other serious, still unresolved cases.

At this stage, Muscat is refraining from giving investigators the names of those involved in the crimes he claims to have knowledge about until he hears back about his pardon request.

The murder suspect finished his debriefing sessions with the police in mid-February.

In his family’s mind, the silence from the authorities since Muscat offered up the information is suspicious.

“The police have told us they are still investigating. How seriously can they be investigating if he has not given them the names yet?”

The Muscat tapes were passed on for review by the attorney general around three weeks ago.

Times of Malta is informed that the authorities are seeking to identify any weaknesses or inconsistencies in his story before making any recommendation about the pardon request.

The authorities will also need to understand why Muscat did not immediately provide them with all the information when he first tried to get a pardon in 2018 and how his potential testimony would hold up in court.

Although it is the police and attorney general who recommend whether a pardon should be given, the final say is in the prime minister’s hands.

The family member contrasted Muscat’s six-month wait with that of Melvin Theuma, who was offered a pardon within a few days.

Sant too expresses his concern about the delay.

“Six months and counting is way too long. This case is supposedly a top priority. You begin to question everything. Since Melvin Theuma is proving not credible, are the investigators afraid to issue another pardon? Or are they protecting someone? This request surely cannot be refused. They know it. They are caught in a catch-22 situation,” Sant said.

Timeline of a Pardon Request

Police discuss with Joseph Muscat the possibility of offering the murder suspect a pardon. His former chief of staff, Keith Schembri, was also aware of the pardon request.

All other suspects involved in the case are alerted about Vince Muscat’s bid to cooperate with the police soon after, with Yorgen Fenech claiming that Schembri was keeping him informed about developments in the murder case.

The police inform the prime minister during a meeting that Muscat has not given enough information to merit a pardon.

Police once again step up their efforts to get Vince Muscat, to talk. His family convince him to cooperate fully with investigators.

Vince Muscat starts offering up details on a number of cases, without naming any names pending the outcome of his pardon request.

Copies of Muscat’s conversations with the police are passed on to the attorney general for review.

Police have yet to complete a formal report about the request, which would set the ball rolling for it to be passed up to the prime minister.