Sons of murdered journalist Daphne Caruana Galizia have called for Attorney General Peter Grech to be fired over a memo he sent to police investigating the Panama Papers exposé.

Grech warned the Economic Crimes Unit that seizing evidence from accountants Nexia BT, who helped set up secret offshore companies for senior government figures would be a “drastic” move and would be “highly” intrusive.

The note was dated May 2016, when the Panama Papers had already sparked investigations across the globe.

Caruana Galizia, who was murdered in a car bomb in 2017, had been investigating the secret structures owned by then Energy Minister Konrad Mizzi and former prime minister’s chief of staff Keith Schembri. 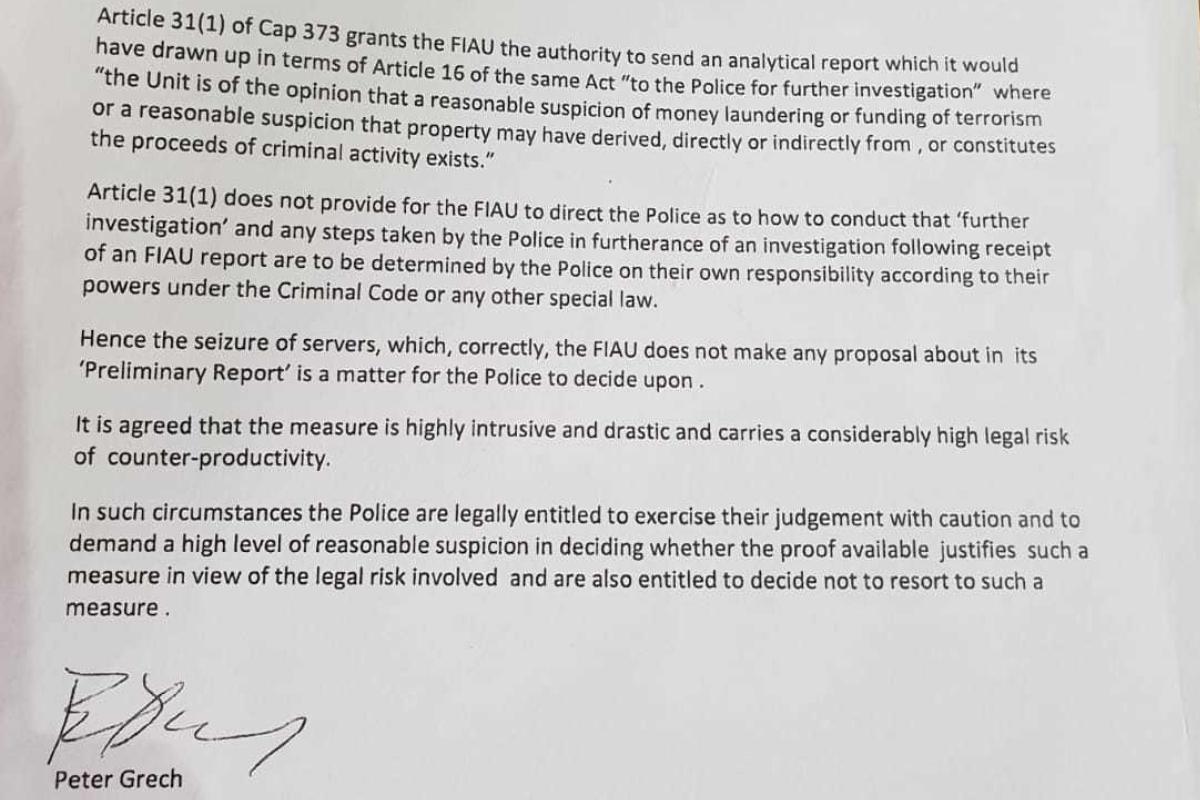 The Attorney General's note to the Economic Crimes Unit in May 16,2016.

'We can call it the murder memo'

Reacting to the contents of the note, revealed by Times of Malta on Tuesday, Matthew Caruana Galizia said his mother would “still be alive” if Grech had ordered the police “to do their job”.

He said: “We can now start calling the memo that the Attorney General sent in May 2016, grinding the Panama Papers investigation to a halt, the Murder Memo.”

Another one of the Caruana Galizia brothers, Paul, said Grech's advice would have reached three key people in the police force at the time: Lawrence Cutajar, Silvio Valletta and Ian Abdilla.

Cutajar resigned as police commissioner in January and is now the subject of a police investigation; Valletta retired last year and has been exposed as having been friendly with Yorgen Fenech, who is charged with complicity in the murder; Abdilla admitted under oath that as head of the Economic Crimes Unit he had not investigated the Panama Papers links to Mizzi and Schembri.

Matthew and Paul's brother Andrew wrote that the note indicated that the attorney general and police had "agreed to abandon our mother in the ring with organised criminals and their partners in government".

The Caruana Galizia family first called for Attorney General Peter Grech to resign the day after the journalist was killed in October 2017.

“We called for Peter Grech to resign the day after the murder. We were right to make that call then and we're right to make it again now. There is no other option for the Prime Minister but to fire Peter Grech immediately,” Matthew Caruana Galizia said on Tuesday.

In the typed note, Grech advised the police that it would be “highly intrusive” to follow through on the Financial Intelligence Analysis Unit’s suggestion, made during a meeting with the police, to seize evidence from Nexia BT’s servers.

The meeting was held after the FIAU sent police a preliminary Panama Papers report in April 2016. This report said there was a reasonable suspicion of criminal activity by the former chief of staff in the Office of the Prime Minister, a prominent minister and former Allied Newspapers Limited managing director, Adrian Hillman, among others.

The decision to seize Nexia BT’s services was a matter for the police to decide on, he said.

“It is agreed that the measure is highly intrusive and drastic and carries a considerably high legal risk of counter-productivity,”  he said.

Police would only seize Nexia BT's servers one year later, after then-Prime Minister Joseph Muscat asked for an investigation into claims that his wife owned secret company Egrant.