Updated 10.50am with company statement

Captain Morgan has decided to suspend works on a pontoon at Balluta Bay following a week-long protest at the site.

The decision comes after residents and activists spent a week blocking works to build the controversial jetty for a hop-on-hop-off ferry.

Activists said on Saturday that the Fortina Investments-owned company had informed them of its decision to halt works, adding that talks among stakeholders would be taking place "in the coming weeks".

Moviment Graffitti spokesperson Andre Callus told Times of Malta that the company had spoken to the group as well as St Julian's mayor Albert Buttigieg and agreed to stop works for now.

Writing on Facebook, Buttigieg shared an email he had received from the CEO of Captain Morgan Operators Ltd, in which the company said it had decided to “temporarily stop current works”.

“We will proceed to inform contractor to remove the spud barge, notwitstanding that all permits to progress with works are in hand,” CEO JeanBert Gatt told the mayor in the email, which was sent on Friday evening.

Buttigieg told Times of Malta that while he and fellow critics were not opposed to alternative means of transport, Balluta Bay should not be radically changed as a result.

“We should not remain passive, it is our duty to speak out. The local council is the voice of the residents and we continue to push residents to be active citizens," he said.

"Now we look forward to discussing how we can move forward and also safeguard the bay.” 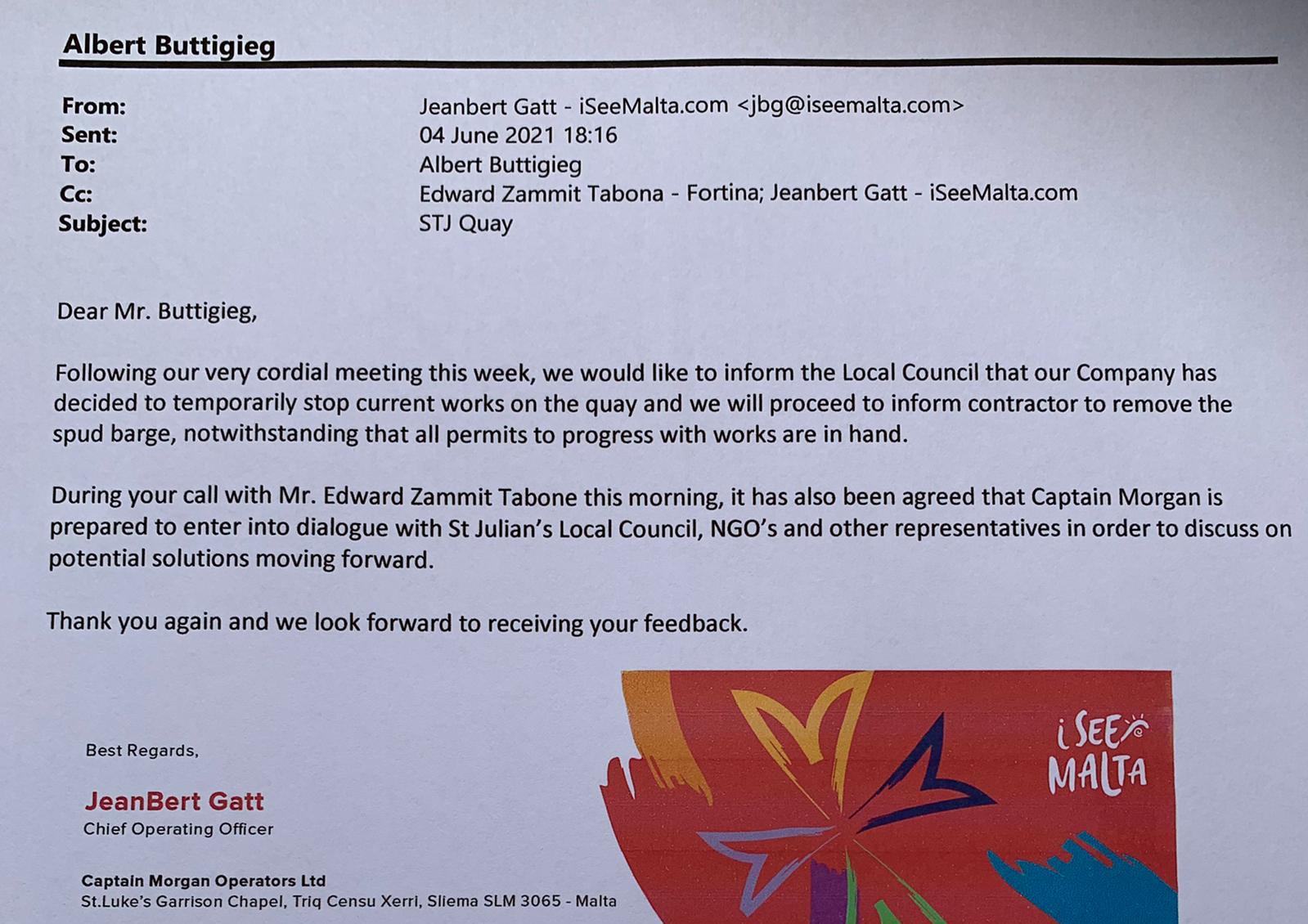 A Captain Morgan spokesperson said the company had decided to temporarily stop works "as a sign of goodwill".

“Notwithstanding all the permits we have in hand, as a sign of goodwill we decided to temporarily suspend the works and enter into dialogue with all the relevant parties in the hope of finding a solution,” the spokesperson said.

The contractor responsible for works has been instructed to remove the spud barge at the site, they added.

Tensions over the works have bubbled in recent weeks, with opponents saying the project permit forbade applicants from carrying out works during the summer months.

Works were temporarily stopped two weeks ago by the environmental regulator following concerns that works were breaching the terms of its ERA permit, but subsequently continued by Captain Morgan contractors.

That led Moviment Graffitti to accuse ERA of having modified its project permit “by stealth” to allow works to continue and sparked a small group of activists to descend on-site to block works earlier this week.

Plans to build the pontoon at Balluta Bay have been vociferously opposed by residents and NGOs, who have argued that the area is a swimming spot that will be obliterated by the pontoon.

The plans, which were recommended for refusal by a Planning Authority case officer, were nevertheless approved last year. Objectors have taken their case to the constitutional court.

The project faces two appeals filed by objectors, one filed against ERA for issuing the nature permit and another against the PA for approving the jetty permit.

In a brief statement on Saturday, civil society activists said that the applicant had decided to suspend works.

“Discussions between the St. Julian’s Local Council, residents and NGOs will take place in the coming weeks,” Moviment Graffitti said.

The NGO thanked the local council, independent candidate Arnold Cassola and Balluta residents for their support.