The remains of a small room and surrounding land on the outskirts of Qala, which is proposed for development into a massive villa, was sold for €500,000 to a company whose majority shareholder is Gozitan construction mogul Joseph Portelli.

The application for development is on Tuesday’s Planning Commission agenda for a final decision. The property – 4,700 square metres of disused farmland in an idyllic setting with unobstructed views – was purchased by Excel Investments Ltd last January.

Real estate experts have expressed surprise at the size of the sum changing hands in the deal.

One said: “This type of land, which includes garigue and lies in an Outside Development Zone, is normally not considered to be of high value. Its actual market price would be around €100,000.

“However, if the area somehow becomes developable, then it’s a different story.”

The proposed development has drawn objections from a host of NGOs and government entities and has been recommended for refusal by the Planning Authority’s case officer.

Yet, the Planning Commission has expressed “concern” over the negative recommendation and signalled its readiness to issue a planning permit.

The purchase contract for €500,000 was signed on January 19. Two days later, a planning application for a villa with pool and garden was submitted that, if successful, would probably see the value of the property balloon to millions. 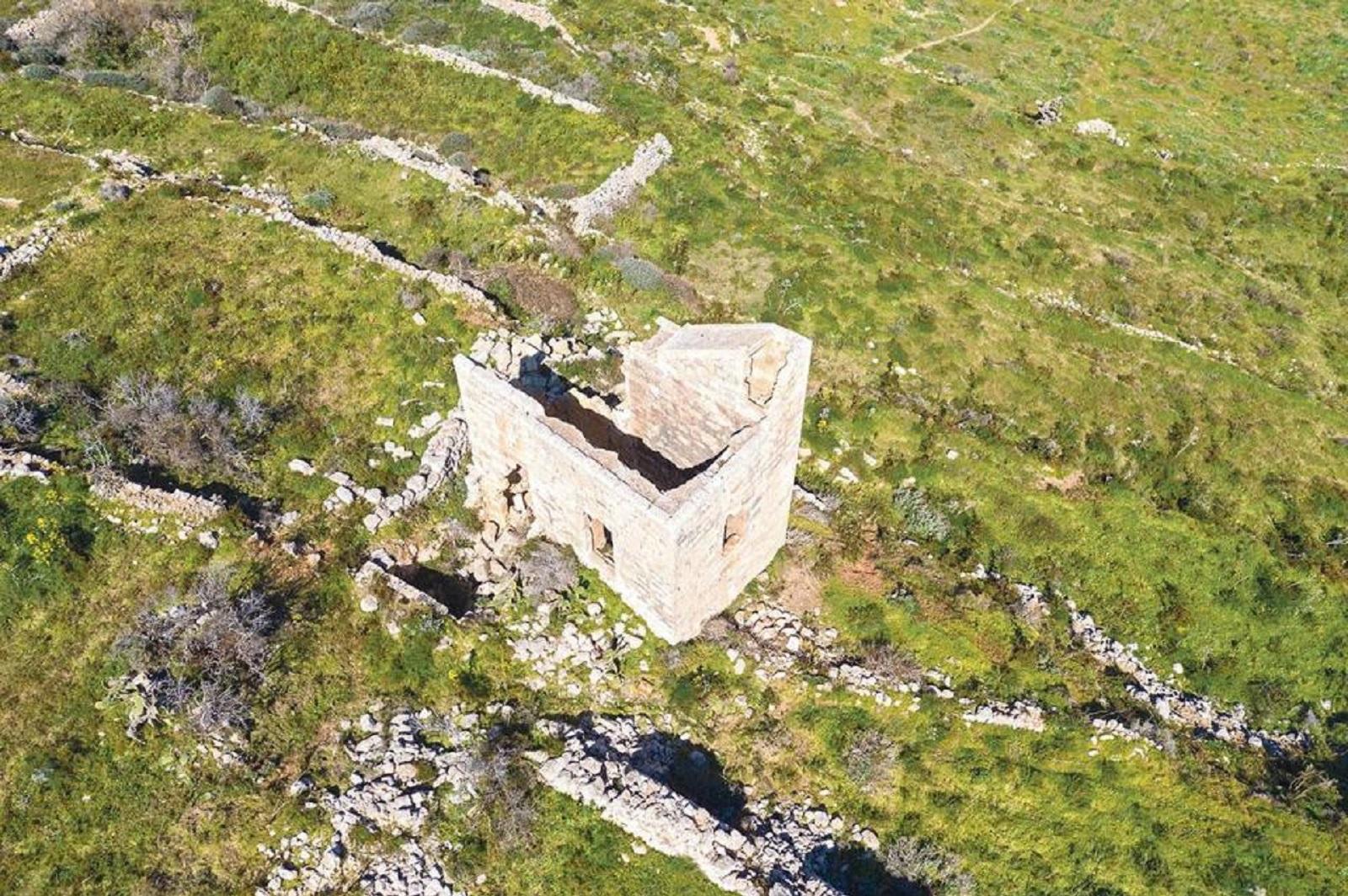 The tiny partly demolished room that may become a big villa.

Formed in 2017, Excel Investments Ltd is owned by three partners. The majority shareholder is Mr Portelli, the Canadian-born Nadur developer who has been investing heavily in major construction projects across the islands, including Mercury Towers in Paceville.

The two others, closely connected to Mr Portelli in several other large developments, are Mark Agius, known as Ta’ Dirjanu, and Daniel Refalo, both young Gozitan businessmen.

However, the Qala application was filed by Mr Agius and not in the name of the company.

The large area in the countryside outside Qala, with wide-open sea and country views, consists of 4,776 square metres of unspoilt land that is not being farmed. In the middle of the land lie the ruins of a roofless room measuring 21 square metres.

The developers are seeking to turn it into a 200-square-metre villa, complete with a swimming pool and sprawling garden.

According to policies established in 2014 by the Planning Authority, the starting point for such an application, in an ODZ, is proof of past residence: the applicant would need to provide evidence that the area to be developed was once used as a home.

In order to try to satisfy this crucial requisite, the applicant provided the authority with the death certificate of an 84-year-old farmer, Grazia Mifsud, who was found dead in the area in 1921. The authority requested, however, that a notarial declaration regarding habitation be submitted. 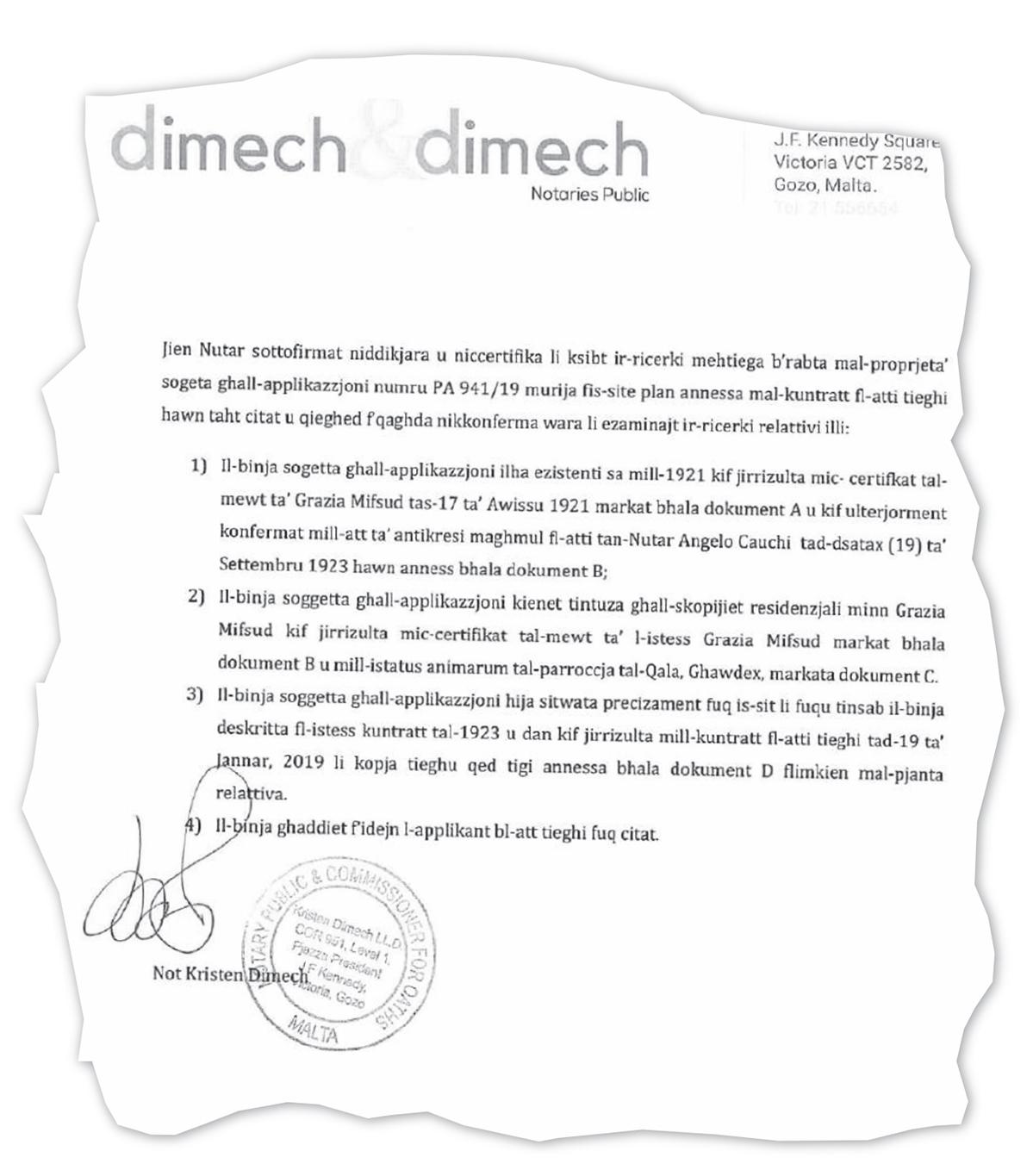 The notarial declaration stating that the room was used for residential purposes.

The applicant’s architect, Alexander Bigeni, submitted a notarial declaration indicating that a property mentioned in a 1923 contract is the same as the one in question. (See pdf document below)

The authority has rejected a request from Times of Malta to upload the correspondence it had with the project’s architect onto its public portal, as it usually does.

Despite the submitted documentation, the PA’s officer on the case expressed his serious reservations about the application.

“The building appears to have been in disuse for a significant period, with aerial photos indicating that the building has been without a roof since at least 1978 and so the proposal is not in compliance with the Rural Policy and Design Guidelines issued in 2014,” he wrote.

He also noted breaches of other development laws.

With an internal floor area of just 21 square metres, the existing building does not qualify for new residential use under the provisions of the current policies.

Furthermore, the extent of the lateral extensions being proposed are much larger than the current area and in conflict with other development regulations.

The NGOs Din l-Art Ħelwa, Flimkien għal Amjent Aħjar and Nature Trust have insisted the application cannot be accepted as it breaches all the rules.

The Environment and Resources Authority and the Superintendence for Cultural Heritage also registered their disapproval.

The PA’s case officer concluded that the application should be refused as it runs counter to policies on various fronts.

Commission has other thoughts

However, last month, when the application came in front of the Planning Commission responsible for deciding on Outside Development Zone applications, chairwoman Elizabeth Ellul disagreed with the recommendation for refusal.

Instead, she chided the case officer over his submissions. “The board is very concerned that the directorate recommended refusal of this application due to the residential status,” she said.

According to Ms Ellul, the case officer should have analysed the submissions properly, particularly the 1921 death certificate ‘proving’ that the area was a residential unit nearly a century ago.

Ms Ellul, an architect, directed the officer to update his report and prepare conditions for a permit to be issued.

In a tweet soon after this decision, Environment Minister Jose Herrera expressed his disappointment, stating it was “not on”.

The commission’s stance was also heavily criticised by NGOs and members of the public.

Read documents related to this case obtained by Times of Malta on pdf below.