Safeguarding Wied Żnuber should not be limited to protecting the valley’s floor, but also the immediate ecologically and archaeological sensitive surroundings, Birżebbuġa residents and environmentalists protesting a model plane airstrip urged the government on Sunday.

“I urge all those involved in this mess to shoulder responsibility and ensure that the site is declared an Outside Development Zone, as was promised before the general election,” Conrad D’Amato, from the Għaqda Storja u Kultura Birżebbuġa said.

“Flying of model aeroplanes should not take place anywhere close to Natura 2000 sites, even if no land is developed. This particular site is a nesting ground of several bird species, including shearwaters and seagulls, which are very sensitive to sound and light,” he added.

D’Amato, who augured that Wied Żnuber does not suffer the same fate as Żurrieq’s Wied Moqbol, which, he said, was destroyed following the development of a quarry nearby, was addressing those gathered for an informative walk in the Ħal Far site.

The alarm about the airstrip was initially raised by a group of farmers who spoke to Times of Malta after INDIS officials turned up accompanied by representatives of an aeroplane model association.

Since then, concern was voiced by the Moviment Graffitti, Għaqda Storja u Kultura Birżebbuġa, the Birżebbuġa council, a group of Birżebbuġa residents and 14 other NGOs, including BirdLife Malta and Din l-Art Ħelwa.

The agreement, signed between the authorities and the Ħal Far Model Flying Association in February for the relocation of an airstrip to the site off Wied Żnuber acknowledging the new area’s “close proximity to the Natura 2000 site”, was made public by Times of Malta. The association is being relocated from a 12,300 square metre to a 44,400 square metre area – nearly four times its size.

Before the election, Prime Minister Robert Abela had claimed: “there will be no development in Wied Żnuber”.

On Sunday residents, the locality’s local council, activists and associations called on Abela to honour his word and ensure that no development takes place in Wied Żnuber and that the part around the bottom of the valley becomes ODZ. This means plans for the airstrip are withdrawn.

The area, which includes swaths of garigue and rural land, also hosts a natural stream, a military air-raid shelter and the scheduled Wied Żnuber Dolmen. It is marked as "industrial" in the South Malta Local Plan.

Among others, Birżebbuġa local council mayor Scott Camilleri said the locality has already been burdened with excessive development, appealing for the preservation of the "little green areas we have left”.

“While we acknowledge that the development is being proposed in an industrial zone, this did not automatically mean the area could be developed,” he said.

D’Amato also decried the lack of public consultation and environmental impact study on the site.

“The British, who developed a military airstrip not far off, conserved this site and safeguarded it with a fence. Unfortunately, the Maltese abused the Ħal Far area.

"We understand that factories had to be built. The other side of the valley has already been destroyed by factories built in the 1980s and 1990s. Both political parties cannot blame each other as the area was abused by all administrations. Let’s protect the little that we have left,” he urged.

“We respect the Ħal Far Flying model association and believe that in a democratic country, everyone has a right to a hobby. We urge for the agreement to be withdrawn and the airstrip relocated in an already disturbed space, which there are plenty of in Malta.” 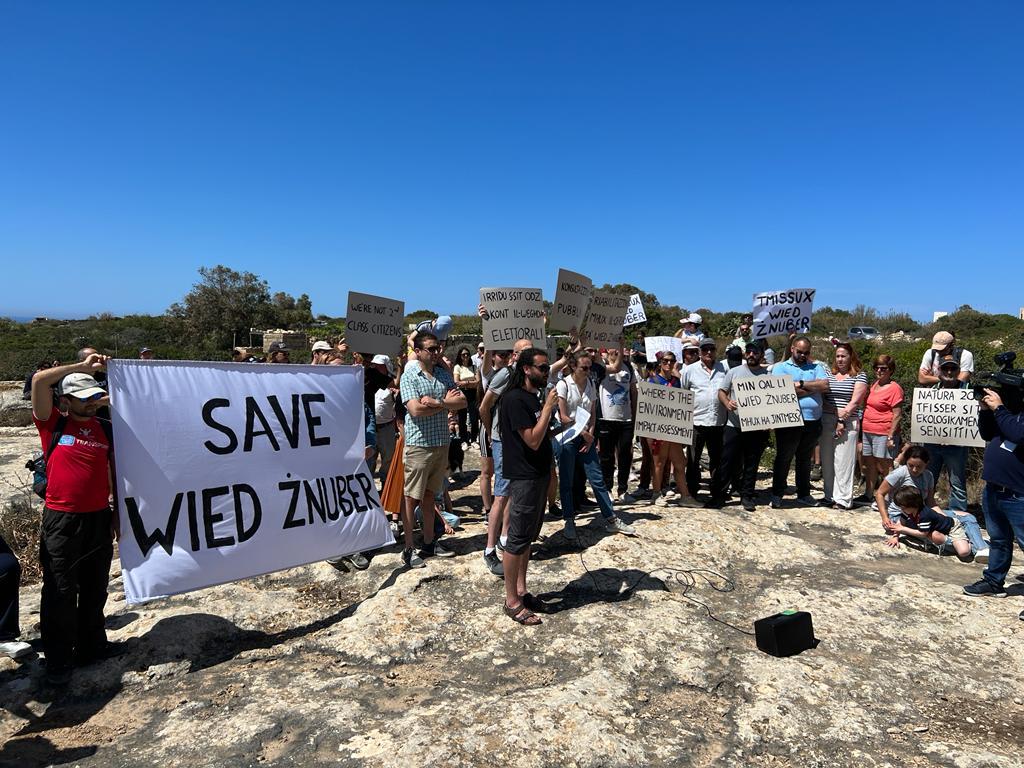 Residents and activists went on an informative walk in the area on Sunday. Photo: Chris Sant Fournier

Mohamed Elaida, 30 years Birżebbuġa resident: I often ask myself: do governments – no matter who is in power – dumping polluting projects onto Birżebbuġa as it is convenient or because people don’t complain?

BirdLife Malta’s CEO Mark Sultana: This is the most built EU member state. 33% of Malta is built. The second most-built country is Belgium with 13%.

Moviment Graffitti activist Andre Callus: It’s ironic that while speaking about greening spaces, natural and agricultural land is given up for development and enjoyed by the few.