The hunting lobby plans to send a 2014 petition to a parliamentary committee in an attempt to make it harder to call an abrogative referendum.

The administrative consultant of the hunters’ federation (FKNK), Joe Perici Calascione, told Times of Malta that the federation feels it should not be so easy to target groups such as hunters, by collecting a mere 40,000 signatures.

This is the threshold to trigger an automatic referendum under the Referenda Act.

Perici Calascione was replying to questions after FKNK CEO Lino Farrugia announced that a petition collected in 2014 and signed by just under 104,300 people would be tabled before the new Parliamentary Petitions Committee.

The petition was a response to another collected by the Coalition Against Spring Hunting proposing to ban spring hunting. 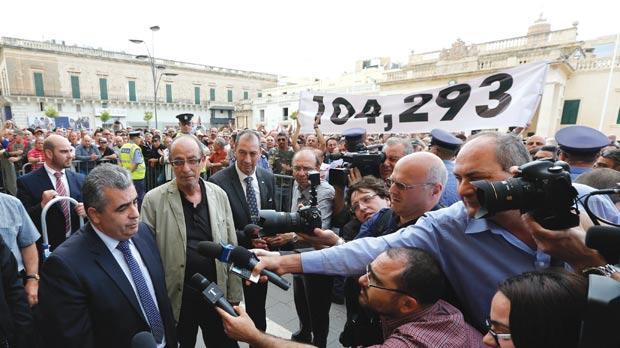 Hunters had collected 104,000 signatures in 2014, presenting them to the government.

A referendum was automatically triggered after environmental groups gathered 45,000 signatures.

The proposed ban was narrowly defeated, with 50.4 per cent of participants voting to retain spring hunting.

Two years ago, the FKNK submitted proposals for reforms to the Constitution and wrote to the President asking him to consider amending the Referenda Act.

Asked about the matter yesterday, Perici Calascione said the federation wanted certain safeguards to be put into place to avoid the possibility of a referendum being held on the basis of the signatures of just 10 per cent of eligible voters.

Asked if the federation had any proposals, he said they would have to be discussed with the parliamentary committee.

He said their aim was for the rights, interests and legal privileges of minorities to continue to be protected.

Perici Calascione refuted the suggestion that the initiative may have been spurred by Birdlife Malta’s intention to start a new petition to call for another abrogative referendum on spring hunting.

In 2014, when FKNK had collected its petition, 13 civil society groups had joined forces to oppose the hunters’ request to be legally protected from ever facing another spring hunting referendum.

Meanwhile, the FKNK has joined its counterparts in 37 other European countries to collect signatures for yet another petition, this time an initiative of the European Federation for Hunting and Conservation (FACE) which is petitioning the European institutions “in defence of our cultural heritage”.

The campaign is in response to what FACE says is the increasing number of problems for Europe’s seven million hunters.

It aims to move away from the trend of finding fault with hunting and recognise the value of hunting for biodiversity and uniting cultures across Europe.