Updated at 3 pm with government statement.

A bill to allow recreational cannabis use has been signed by President George Vella and is now part of Maltese law.

Legal Notice 478, published by the government on Saturday, notes that the Authority on the Responsible Use of Cannabis Act has now come into force and establishes Innovation Minister Owen Bonnici as the minister responsible for it.

The legal notice was published four days after the bill was sent to President Vella for his signature, after a majority of MPs voted in its favour.

With the law now in force, Malta becomes the first country in Europe to permit restricted use of cannabis for recreational use. As of Saturday, cannabis users can carry up to 7g of the substance on them without fear of prosecution and grow four plants at home. Any users who in the past were convicted of cannabis possession offences can apply to have their criminal records expunged. 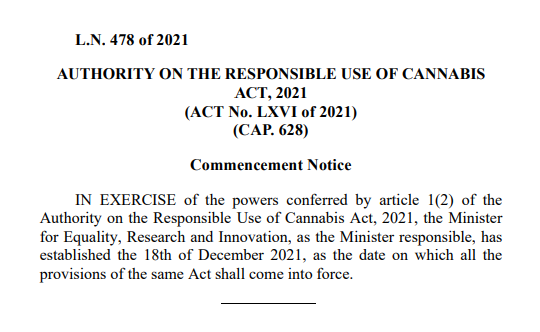 The law also lays the groundwork for a cannabis regulatory authority that will be responsible for overseeing purposely established cannabis associations, where registered users will be able to buy limited amounts of cannabis buds or seeds. Those associations will not be allowed to advertise their services and must be run on a non-profit basis.

Critics of the reform range from medical professionals to Church-run organisations, employers and the Nationalist Party, which has said that the law will normalise cannabis use. Former prime minister Lawrence Gonzi and former president Marie-Louise Coleiro Preca have also made their concerns public.

Despite the staunch opposition, the bill moved briskly through parliament, going from first reading to enactment in just over six weeks.

Appeals from some factions for the president to refuse to sign the law were shot down by the head of state himself on Friday evening, in a speech in which he told those urging him to act:

“In no way can the president, under our system, impose his decision on those representing the people in parliament, whether he agrees with it or not.”

A president who did so, he said, would effectively be seizing power and sparking a constitutional crisis.

A newly-established political party, ABBA, has said that it will be amassing signatures with the intent of forcing a referendum on the cannabis issue, with the aim of having the law repealed.

The PN has said that it will not be backing that referendum bid and will instead seek to reform the law “based on data” if elected to government.

In a statement on Saturday afternoon, Equality Minister Owen Bonnici said the reform had been an electoral pledge prior to the last general election.

“The entry into force of this robust legislative framework underlines this government’s willingness to make bold decisions by implementing wise and unprecedented reforms in order to bring about change and social justice in the best interests of society as a whole”, he said.

"The government urges people to make the best choices for their wellness and therefore will keep investing in programs of prevention against all substance abuses," the statement reads.