Joseph Muscat, who announced on Sunday that he would step down in January, had promised upon his election to the Labour Party helm to bring about an earthquake in Maltese politics. He kept his word.

Rather, he took the Labour Party to new heights, winning the general election of 2013 with 54% and a nine-seat parliamentary majority and that of 2017 with almost 55% when compared to the Nationalist Party. Labour also won every round of local council elections it contested under his leadership. 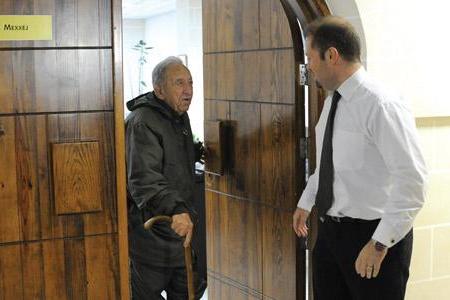 A smooth political operator, Church-school educated Muscat studied public policy, business management and European Studies at the University of Malta and Bristol and worked briefly in a financial services company before becoming a journalist in One News. He was elected to the executive of the Labour Party when he was 21 years old.

Muscat campaigned strongly against European Union membership, and yet a year after Malta’s accession he, like the rest of the party, performed a dramatic U-turn and was spectacularly successful in the 2004 elections to the European Parliament, being bettered only by Simon Busuttil in the number of votes won.

His European Parliament activities strengthened his credentials within the party and when Alfred Sant resigned after losing the 2008 general election by a whisker, then party deputy leader (now President) George Vella convinced him to run for the leadership. 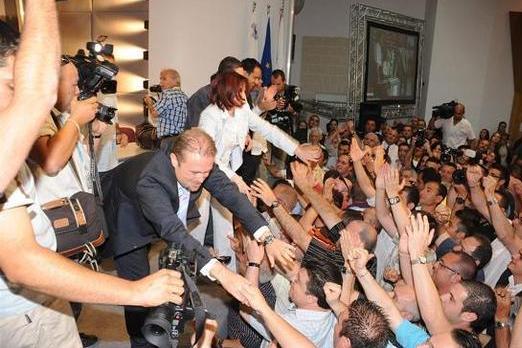 Joseph Muscat is congratulated upon his election as party leader in 2008.

He managed to see off contenders such as former deputy leader (later President George Abela) to take the top post.

As party leader, Muscat refreshed the party’s image, moving it closer to the centre, making it ‘business-friendly’ and liberal. He went so far as changing its emblem.

With Lawrence Gonzi’s government crippled by a fragile one-seat majority, Muscat achieved an early success when he backed an initiative of then PN MP Jeffrey Pullicino Orlando for Malta to hold a referendum and then pass legislation introducing divorce, against Dr Gonzi’s wishes. 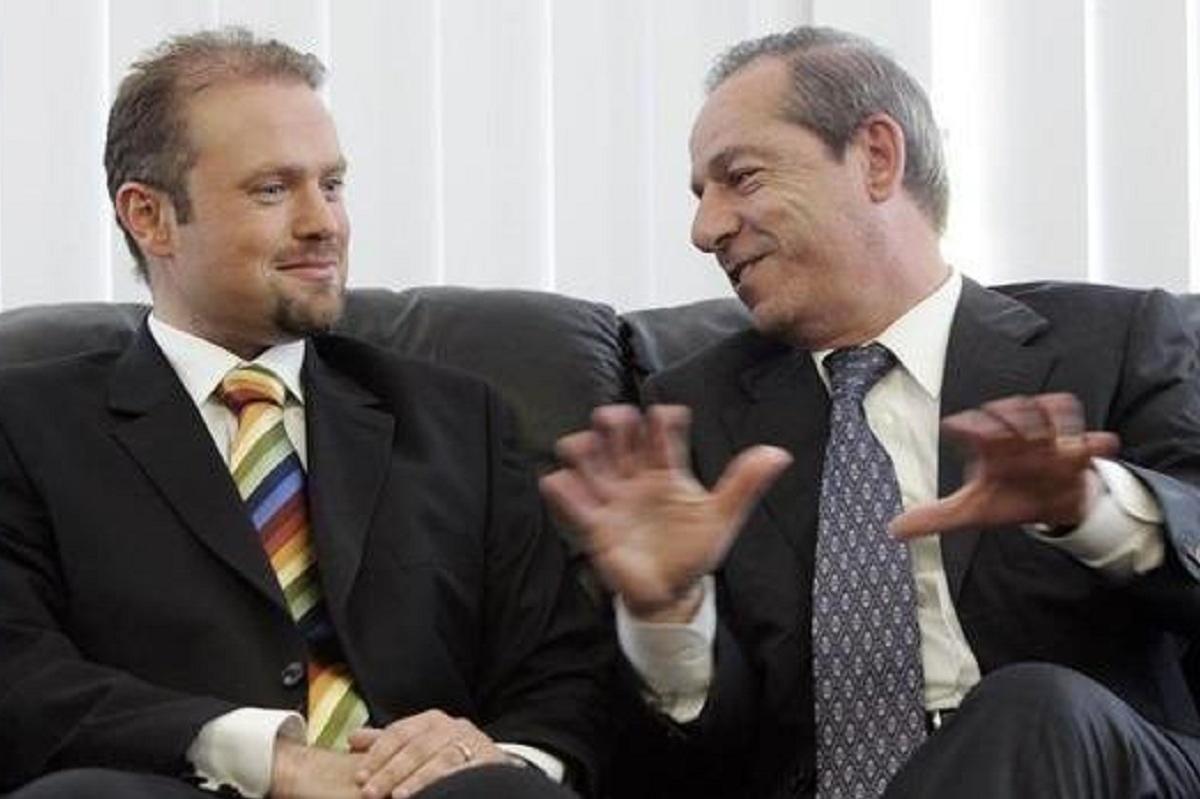 Muscat spectacularly won the 2013 general election. But within weeks he ran into what was to become a litany of allegations of wrongdoing and corruption, starting with the controversy over government’s generous funding in the Café Premier case. 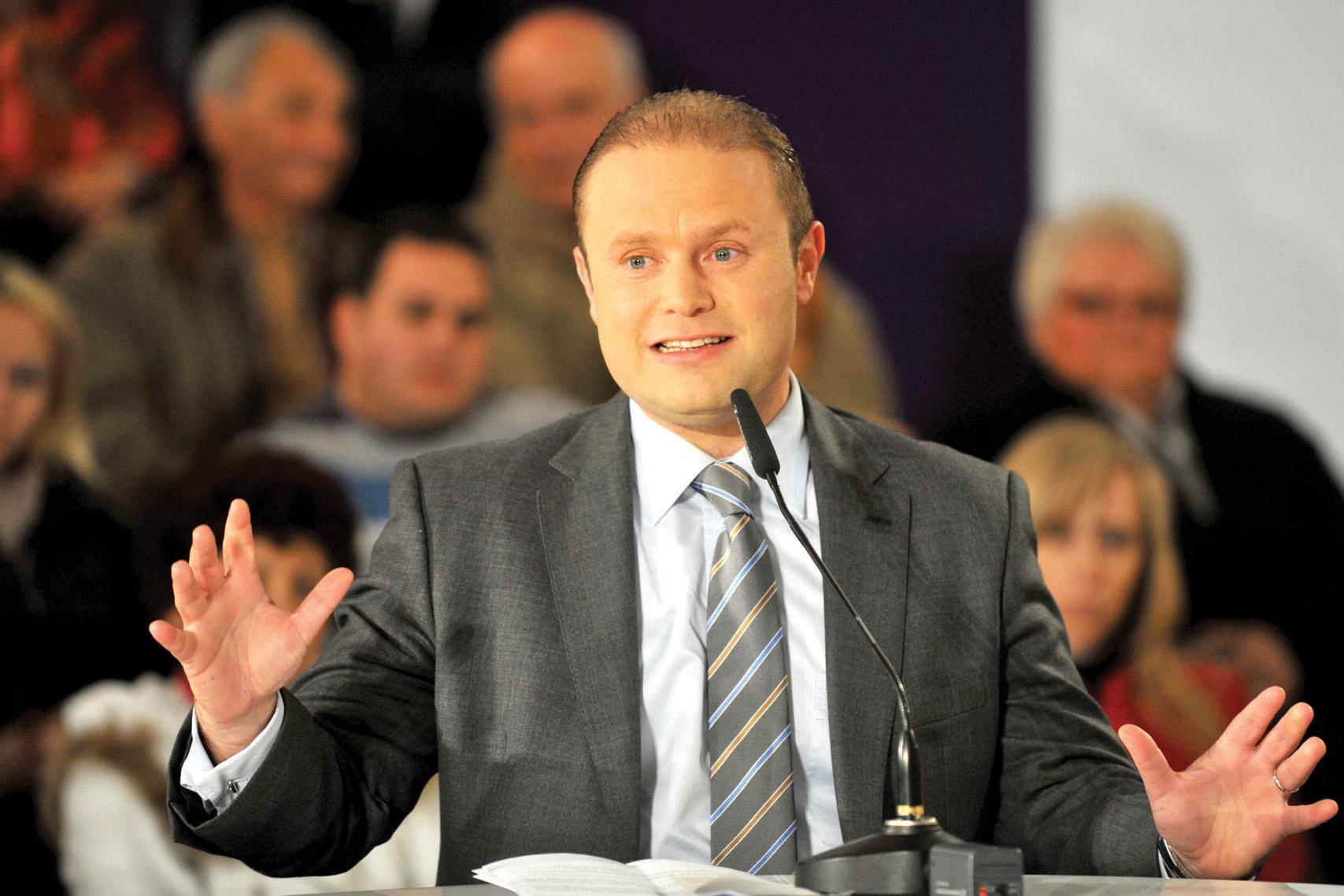 Joseph Muscat in 2014, one year into his leadership.

Although allegations mounted, the economy boomed as Muscat managed to harness private sector investment in many sectors. One of his early, and ultimately most controversial decisions, was to award a contract to a private consortium to build a new gas-fired power station in Delimara. That was part of his promise to reduce power tariffs, a central part of his 2013 election pledges.

He also controversially introduced the sale of Maltese passports to wealthy investors, and brought in the previously unknown Vitals healthcare group to manage St Luke, Karin Grech and Gozo hospitals. 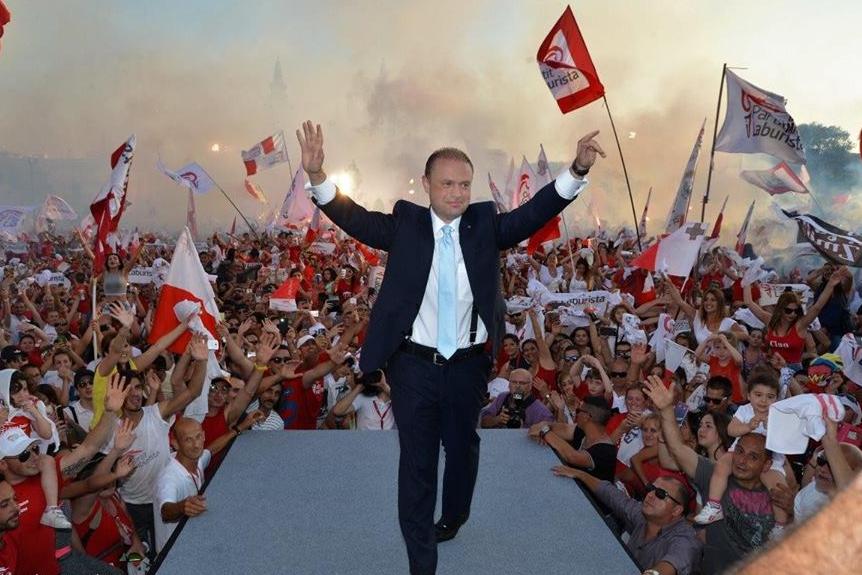 Unemployment and the national deficit both shrunk and Malta started to see an influx of foreign workers as the economy grew and demand for jobs exceeded supply.

Muscat was able to oversee major infrastructural projects including the rebuilding of the coast road, the Tal-Qroqq junction and most of the Marsa junction.

He also modernised social services, introducing new concepts such as an in-work benefit for the former unemployed and free childcare to help working mothers.

But it was in civil rights where his government left its most prominent mark, with a programme spread over two legislatures which saw the introduction of civil unions and same sex marriage and a gender equality bill. He also overhauled drugs legislation, decriminalising drug possession for personal use and also ushering in the medical cannabis industry.

Claims by journalist Daphne Caruana Galizia that Muscat’s wife Michelle was the ultimate beneficiary of a secret Panama company named Egrant rocked the government in 2017. Muscat would later write that the day when the news was published was the worst of his premiership (until that time).

“The worst day of my time as Prime Minister when in the third week of April 2017, my dear wife Michelle was thrust into this despicable story. I hurt in a big way because the poisoned arrows reached my heart,” he wrote in a biography issued by the Labour Party.

Joseph Muscat and his wife Michelle. He said the days of the Egrant claims were the 'darkest' of his premiership.

That case may have been behind a decision by Muscat to call a general election one year early, in 2017.

When Caruana Galizia was assassinated in October of that year, problems mounted.

Muscat was repeatedly accused of having helped create a culture of impunity which made the crime possible, especially as he had failed to dismiss his chief of staff and confidante Keith Schembri and minister Konrad Mizzi after Caruana Galizia revealed they had opened secret Panama companies in 2013.

The saddest day of Joseph Muscat's premiership - the murder of Daphne Caruana Galizia.

There was some relief for Muscat when a magisterial inquiry found no evidence to back the claims that he or his wife were the owners of Egrant, but Muscat left lingering doubts when he refused to publish the report in full, despite being so challenged in court.

One year after Caruana Galizia was killed, Reuters and Times of Malta revealed that 17 Black, a Dubai company which Caruana Galizia had been the first to flag, was owned by Yorgen Fenech, one of the shareholders of the power station commissioned by the government.

A secret e-mail showed 17 Black was the vehicle intended to deposit funds in the Panama companies owned by Mizzi and Schembri. Despite the outcry, he again kept the two men beside him.

End of the affair

Muscat could hold on no longer, however, when Fenech was arrested in November 2019 as part of the Caruana Galizia murder investigation. Schembri quit and was arrested, later released. Mizzi was forced out.

Amid calls for his own head, Muscat got unanimous support from his Labour MPs stayed on, while letting it be known that he was planning to go once the waters calmed down. 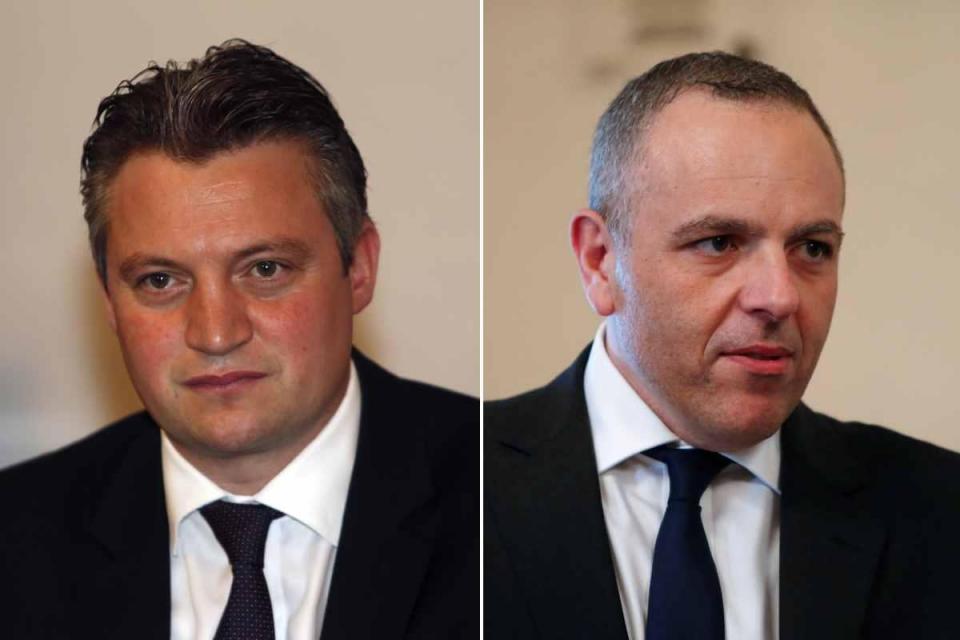 The architects of Joseph Muscat's election in 2013 also precipitated his downfall. Konrad Mizzi (left) planned the power tariffs strategy in 2013 while Keith Schembri modernised the party.

When Fenech was arraigned in court on Friday and charged with having masterminded Caruana Galizia’s murder, Muscat took that as his cue to exit.

Muscat had declared, while still in opposition, that he did not feel that anyone should serve as prime minister for more than 10 years. In 2017, as he savoured his second electoral triumph, he built on that statement, declaring that he would not contest another general election.

But recent developments brought his resignation forward. Only last month, when asked if the Budget he had just present was his last, he had replied with an emphatic 'no'.

He leaves having achieved much of what he promised but with the regret that he did not oversee the introduction of legislation to ensure gender equality in parliament and knowing that his promise to reform the Constitution and create a ‘second Republic’ remains a distant dream. 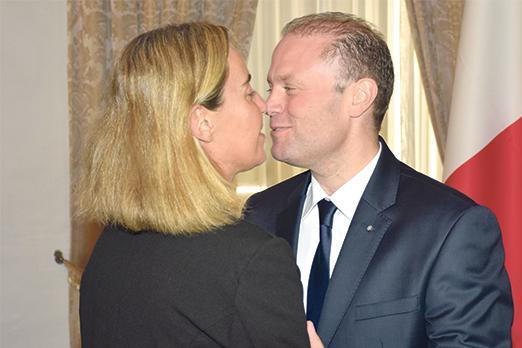 Prime Minister Joseph Muscat welcomes EU High Representative for Foreign Affairs Federica Mogherini on November 2, 2016. He hosted two EU summits in Malta as well as a Commonwealth heads of government meeting, but failed in his ambition to land a top EU post..