Former planning secretary Michael Farrugia ordered the Planning Authority to allow high-rise developments in Mrieħel on the same day a meeting between himself and business magnate Yorgen Fenech was logged in the Castille visitor registry.

Mrieħel’s late inclusion in the policy paved the way for the Tumas and Gasan groups to build four towers bang in the middle of the locality.

Documents obtained by the Daphne Caruana Galizia Foundation through a Freedom of Information request show Fenech clocked in for a meeting with Farrugia at Castille at 9.27am on March 5, 2014. He clocked out again at 9.53am.

That same day, Farrugia sent a letter to the CEO of the Planning Authority, containing the following order:

“Mrieħel is to be considered as an appropriate location for tall buildings with the intention to create a strategic employment node”. 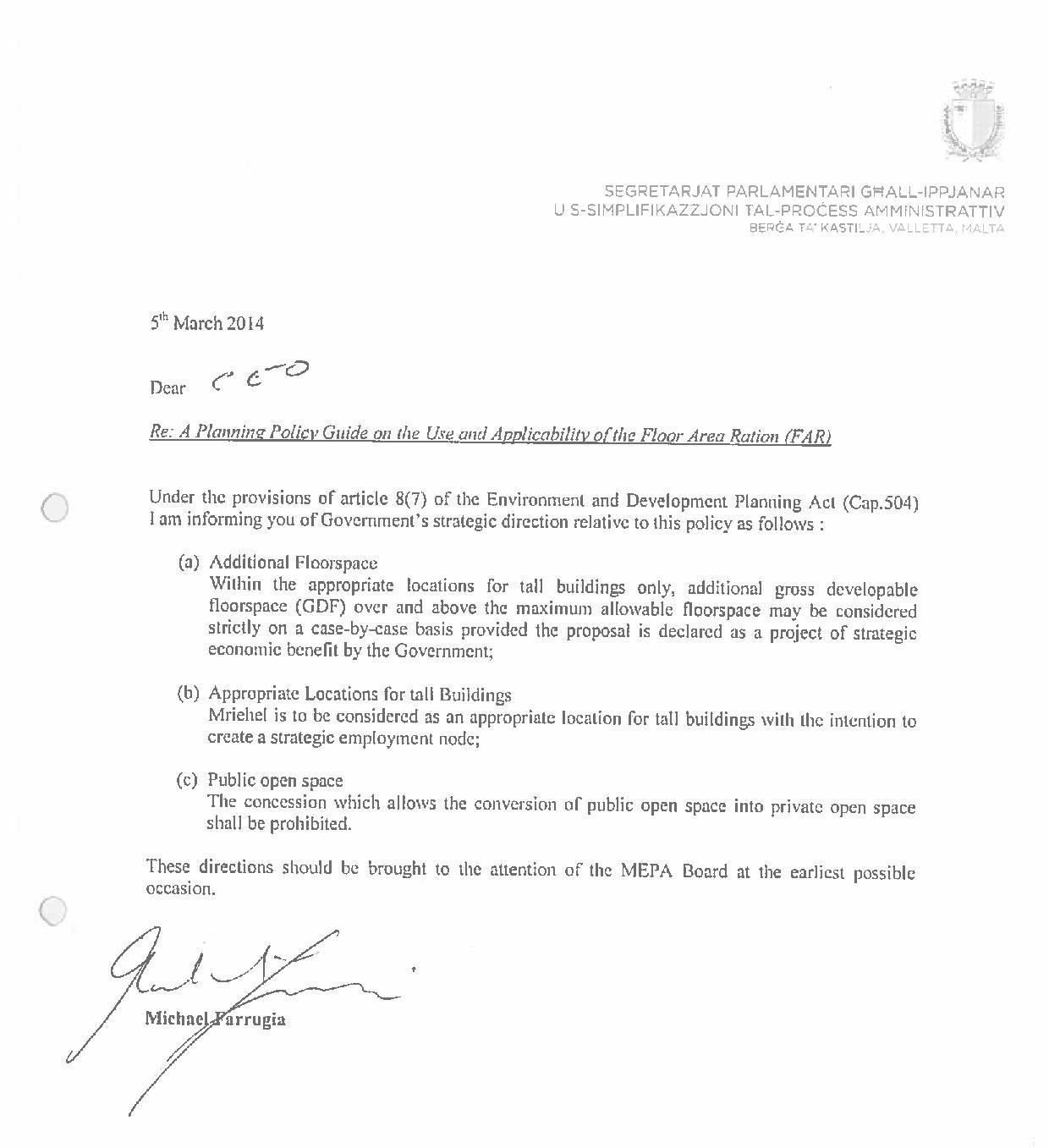 The letter that changed the policy sent on the day that Michael Farrugia met Yorgen Fenech.

Six months after Farrugia’s letter, Tumas and Gasan filed a planning application for a development known as the quad towers.

Fenech was executive director of the Tumas Group at the time – a position he renounced last year, shortly before he was arrested and charged with organising and financing the murder of journalist Daphne Caruana Galizia. Tumas and Gasan are also partners in the power station project.

No reference to Mrieħel could be found in the consultation documents about the high-rise policy document prior to Farrugia’s order in March 2014.

Its last-minute inclusion as an area for high-rise developments had taken many by surprise at the time, with Planning Ombudsman David Pace slamming the lack of public consultation.

NGOs in 2016 had unsuccessfully appealed the quad towers permit on the basis that Mrieħel was only included as an appropriate location for high-rise buildings after the public consultation process had been closed.

At the time, the NGOs had demanded former prime minister Joseph Muscat to explain the decision to include Mrieħel in the high-rise policy, as well as state why the decision had been taken behind closed doors and not put to public consultation.

Replying to questions by Times of Malta, Farrugia, who is now energy minister, initially replied with a one-liner saying: “Had no such meeting”.  Asked to clarify if he was disputing the official visitor log at Castille, Farrugia then came back with the reply: “No such meeting on Mrieħel sight [sic] ever took place”.

Late on Tuesday, he sent another clarification: "[The] decision for Mrieħel to be included was taken days before letter was sent by a committee evaluating policies after public consultation. In such instances the minister/parliamentary secretary responsible has to send such decision to the CEO". 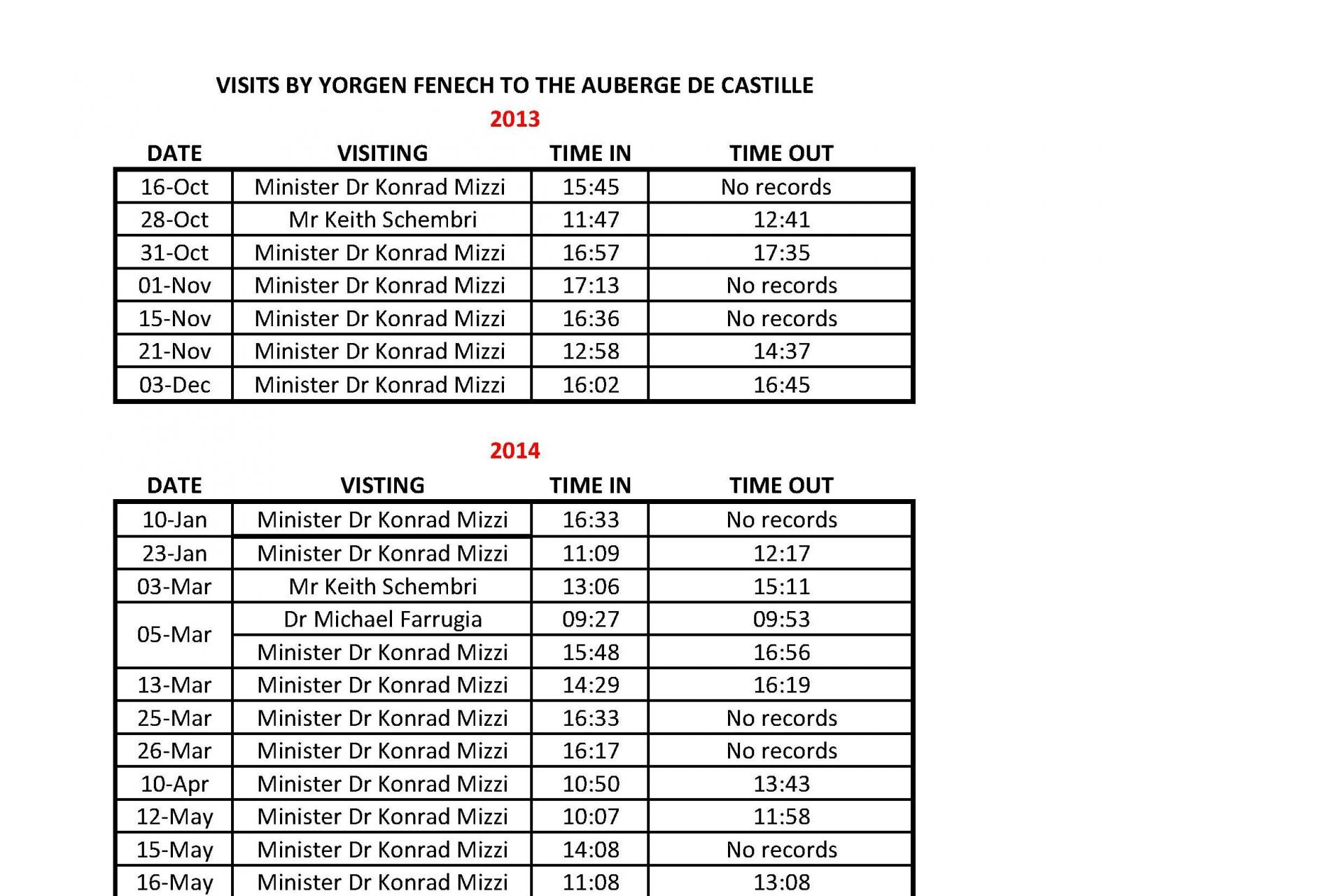 Environmentalist Arnold Cassola has reported the timing of the meeting and policy change to the Permanent Committee Against Corruption.

In 2014 Farrugia was parliamentary secretary for planning and simplification of administrative processes – a junior minister position under Muscat.

In 2018, the Planning Authority approved an extension to the quad tower development, allowing an increase of around 20 per cent, including an underground car park, supermarket and other commercial uses.

Last year, Infrastructure Malta forged ahead with plans to extend the carriageway near the Quad Towers developments right up to Rabat.

Fenech is currently on remand as the compilation of evidence is being heard ahead of his murder trial. Fenech’s arrest and prosecution led to prime minister Joseph Muscat’s downfall shortly after, following years of defending his chief of staff Keith Schembri and former Energy Minister Konrad Mizzi.

In the years prior to his resignation, the Panama Papers leak and a joint investigation by Times of Malta and Reuters had shown Schembri and Mizzi planned to secretly receive substantial amounts of deposits offshore from 17 Black, a company owned by Fenech.