Tourism Minister Konrad Mizzi on Monday pledged to fight on amid increasing calls for his resignation.

Education Minister Evarist Bartolo was among those who publicly called for him to go on Monday amid the latest developments in the Caruana Galizia investigations.

.@KonradMizzi set up a secret company in Panama to receive illicit payments from a secret company owned by Yorgen Fenech, a man who is now an assassination suspect. But he’s worried about “criticism”. He should be locked up in a padded cell. https://t.co/FDWIrwNyFG

Dr Mizzi in a Facebook post said he was encouraged by messages of support and would not respond publicly to criticism by colleagues. The only thing which such criticism did was to help the PN, which was doing its best to sow division within the Labour ranks, he said.

He said that Labour strongly believed in justice and the rule of law and the institutions should be allowed to work serenely, without any Facebook attacks. 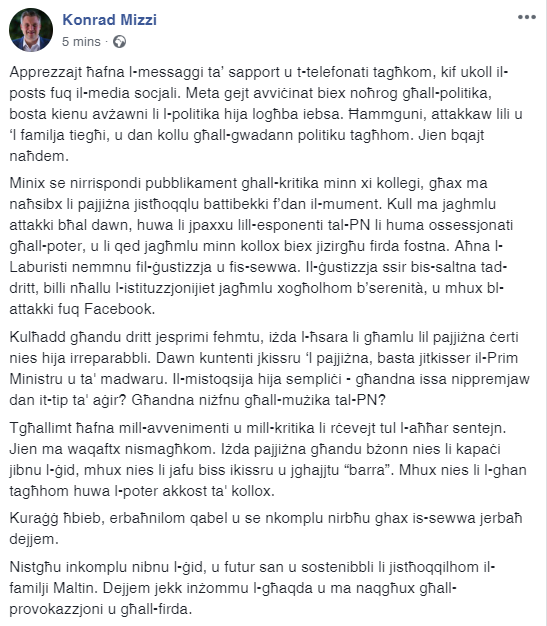 Everybody had a right to express his opinion, but some comments caused huge damage to the country, he warned.

Dr Mizzi said he had learnt a lot from criticism of the past two years but the country needed people who could create wealth, not people who just screamed 'Out'.

"Take courage friends, we beat them before and we will continue to win because truth always prevails," he said.

He called for unity and said no one should fall for provocation.

'The gardener should have started pruning you'

One of those who did not seem to heed Dr Mizzi's call for unity was his own chief of staff.

In a Facebook post of his own, Kevin Borg hit out at Mr Bartolo likening his boss and Keith Schembri to tree branches that needed to be pruned. 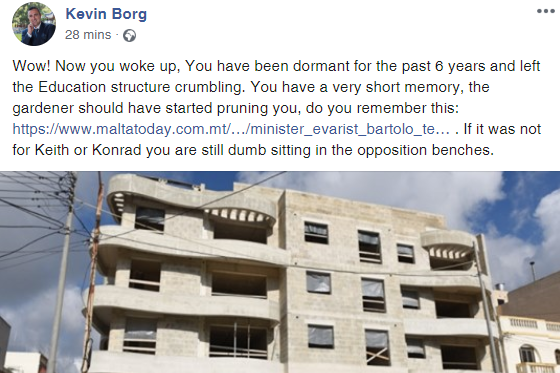 "You have a very short memory, the gardener should have started pruning you," Mr Borg wrote, highlighting a corruption case concerning one of Mr Bartolo's canvassers.

"If it was not for Keith [Schembri] or Konrad [Mizzi] you are still dumb sitting in the opposition benches".