Updated with reactions at 9.40am

Education Minister Evarist Bartolo on Monday urged Tourism Minister Konrad Mizzi and chief of staff Keith Schembri to resign from the Labour Party or be struck off the tree.

His call, made in an early morning Facebook post, prompted a public reaction from a defiant Dr Mizzi, who said he had no intention of quitting and said "such attacks only benefit PN exponents who are thirsty for power".

It was the first time Mr Bartolo singled out and named Dr Mizzi and Mr Schembri, having post two other disgruntled Facebook posts in as many days in the wake of developments in the Daphne Caruana Galizia investigation, particularly the arrest of businessman Yorgen Fenech.

Mr Fenech is a person of interest in the investigation, with links to Dr Mizzi and Mr Schembri through his offshore company 17 Black.

The minister's comments come as Times of Malta reports on Monday that Dr Mizzi and Mr Schembri will face strong calls to either step down or be removed from office by MPs during meetings of the Cabinet and government Parliamentary group this week, starting today.

'The tree is bigger than any of its branches'

Writing in a Facebook post, Mr Bartolo said that even the strongest, most fruitful tree needs to be trimmed as it would otherwise wither and die.

"If we were to let the tree that is the Labour Party die, who would suffer? The rich? No. It would be the weak and those without a voice who would suffer most if we lose the common good we have achieved" he said.

"The tree is bigger than any of its branches. Konrad Mizzi and Keith Schembri can choose to resign in the interests of the people for whom the Labour Party was formed. Otherwise, the Labour Party needs to take care of the tree lest it all wither and die. It needs to act before it is too late," the minister said.

Mizzi's chief of staff lashes out

Mr Bartolo's Facebook post prompted a lengthy reply from Dr Mizzi, who hit back at his cabinet colleague by saying that infighting only benefited the PN.

"I will not respond publicly to criticism from colleagues," he wrote.

Dr Mizzi's chief of staff Kevin Borg, however, did not hold back. 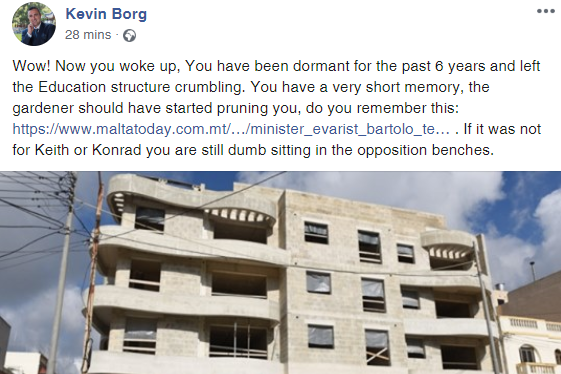 Konrad Mizzi's chief of staff hits out at Mr Bartolo, in a Facebook post he subsequently removed.

"If it was not for Keith or Konrad you are still dumb sitting on Opposition benches," he wrote in a Facebook post.

"You have a very short memory, the gardener should start pruning you".

Country should not protect criminals

On Sunday, Mr Bartolo had said the country could not protect murderers, money launderers and other criminals. Justice had to be done with everyone without fear or favour, the minister said without mentioning anyone.

"Nearly 100 years ago honest people who loved the country worked for the birth of a Labour Party because they wanted a fair and just society, not just in the distribution of wealth but also when it came to law and order," he said.

"They wanted the law to be equal to all and did not want the people with money or in power to reign supreme."

JUST OUT? @KonradMizzi and @keithaschembri must be immediately arrested and, as a minimum, charged for corruption and money laundering. They have been protected by their accomplice @JosephMuscat_JM for far too long. https://t.co/Z4eMoa0E5Y

On Saturday, he wrote that justice needs to be done "without fear or favour" in the Daphne Caruana Galizia murder case and facts to be made public, for the country to be able to return to normality.

Mr Bartolo had also called for resignations when the Panama Papers revealed secret companies owned by Dr Mizzi and Mr Schembri, and he had stood by his call several months later.

Mr Bartolo is one of the veterans in the Labour government, having also served as Education Minister in Alfred Sant's short-lived government between 1996 and 1998. During that time, as tensions rose and mr Mintoff threatened to bring down the government, Mr Bartolo had called on Dr Sant to call his bluff. 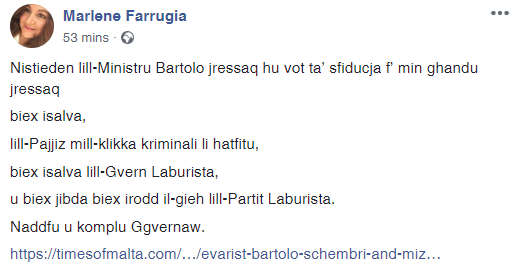