The investigation into Daphne Caruana Galizia’s assassination has led police to open at least 11 other probes into various suspected crimes, a homicide inspector told an inquiry on Wednesday.

Inspector Kurt Zahra said that a task force established specifically to investigate Caruana Galizia’s murder had to process a huge amount of data which branched out into several other, separate criminal probes.

Investigators were still working on the case, he told three judges leading a public inquiry into Caruana Galizia’s October 2017 murder. Zahra is one of two inspectors leading the murder investigation. It was the second time he was testifying as part of the public inquiry.

He told the inquiry that data extracted from devices linked to murder suspect Yorgen Fenech featured “ various communications with several public figures” as well as “an enormous amount of data concerning people from all levels of society”.

With Zahra reluctant to divulge any further information in open court, the inquiry invited him to continue testifying behind closed doors. He duly did so.

The data on the seized devices was extracted by Europol experts at The Hague in the Netherlands and is expected to be presented to a court hearing the case against Fenech in November.

Zahra said that Europol held all the extracted data, with a copy also held by at police headquarters in Floriana. He said he did not know whether the attorney general’s office also had copies of it.

The data was handed over to the police before current police commissioner Angelo Gafa’ assumed office, Zahra said, “when [Ian] Abdilla was still in charge of the economic crimes unit”.

He declined to offer an opinion on the murder motive, saying it was too early to draw any conclusions as the investigation remained ongoing.

Following Zahra's testimony, a former permanent secretary at the Foreign Affairs Ministry testified that the order to recall one of Daphne Caruana Galizia's sons, Andrew, from a diplomatic posting in India came from minister Carmelo Abela.

Abela had testified last week that he could "not remember" whether there was any political pressure from the Office of the Prime Minister to move the junior diplomat out of the posting.

4.11pm The inquiry session is concluded for today. The next session is scheduled for Friday afternoon, when Justice Minister Edward Zammit Lewis is expected to testify.

This live blog will end here. Thank you for having joined us. We will have a brief summary of the inquiry session’s key points available shortly.

Caruana Galizia was not replaced for four months

4.07pm Jason Azzopardi asks Formosa whether she recalled Borg objecting to the move in writing.

She does, and says that while she does not the specifics of her reply, the gist was that the recall “was to go ahead under the minister’s order”.

At the time when he was recalled, Caruana Galizia was one of just two people stationed in New Delhi – the other being the high commissioner.

“So pending [his] replacement, the high commission was managed by one official,” Formosa says.

That’s all from Formosa, whose brief testimony is now concluded.

4.03pm Formosa says Caruana Galizia was a diplomat but she does not know the exact nature of his work. She is pressed about the reason for his recall and insists none was given.

“I don’t recall any discussion, just that he was to come back within two weeks”.
Was that also decided by the minister [Carmelo Abela], she is asked.

The High Commissioner at the time [Stephen Borg] wanted Caruana Galizia to stay on for a while longer, Formosa says, but the minister “wanted the move to go ahead”.

Formosa says she had never received any reports about Caruana Galizia.

'I gave no reason. I had none'

4pm Formosa says she does not know why the transfer was ordered, but that she did as instructed and sent for Andrew Caruana Galizia to inform him that he was being recalled.

He had been in the post for just one year at the time. Formosa says that normally, foreign postings are for a three-year period.

He wanted to remain in the post, Formosa says, though she does not recall any discussion about the decision. Caruana Galizia is now on unpaid leave, she says.
“I recall writing to inform the ambassador in an email, but I gave no reason. I had none,” she says.

Formosa says the email might be in Caruana Galizia’s personal file.

3.55pm Formosa testifies that she was directed to terminate Caruana Galizia's post by minister Carmelo Abela.

"He spoke to me directly," she recalls. Formosa says she does not remember whether instructions were also given in writing.

[Just last week, Abela said under oath that he could not recall whether there was political pressure to move Caruana Galizia out of the post]

3.53pm The next witness is Fiona Formosa, an official at the Foreign Affairs ministry since 1996.

Formosa was the ministry's permanent secretary in 2017, when Andrew Caruana Galizia was transferred away from a posting in India.

3.50pm Inspector Zahra exits the courtroom - he is done testifying, it seems.

Journalists are allowed back in and the inquiry session can now continue in full public view.

Inquiry ongoing - but behind closed doors

3.35pm It's been 30 minutes since journalists were asked to leave the room, and the doors to hall 20 remain firmly shut.

Inspector Kurt Zahra spent less than half an hour testifying in public today. In that brief testimony, he revealed that

'Data about people from all levels of society'

3.08pm Lawyer Jason Azzopardi asks the witness if the data includes many communications between politicians and businessmen, or just a few.

Zahra: “There is an enormous amount of data concerning people from all levels of society. I’m not only referring to politicians.

“Perhaps someone else from the task force who might have better oversight of all data might give you a more clear picture,” he adds.

Zahra is to continue testifying behind closed doors.  The press is asked to leave the hall until the inspector is done testifying.

3.05pm Judge Michael Mallia asks about any links between politicians and business interests.

Zahra says data concerning that has not yet been presented as part of the compilation of evidence against suspect Yorgen Fenech. He is pressed and confirms that “there are communications”.

“With great caution, I say that there are various communications with several public figures,” Zahra says.

Zahra says data will be presented to the inquiry in “around November”.

Judge Lofaro, mindful of the inquiry’s December deadline, presses the witness for a more precise date.

Lawyer Jason Azzopardi, representing the Caruana Galizia family, steps in and says they expect the attorney general to have sent acts of inquiry back by the end of that month.

Why was Daphne killed?

3.02pm Zahra is asked whether police have determined the motive behind Caruana Galizia’s murder.

He declines to answer, saying he does not want to speculate and that there is more data to be analysed.

“If I say we know the motive beyond doubt, then it would be useless to wait for the outcome of the investigation,” he tells the board.

Data given out 'when Abdilla headed ECU'

“Before this [police] commissioner, when the economic crimes unit was headed by [Ian] Abdilla,” he replies.

[Abdilla was removed as ECU head in June by incoming commissioner Angelo Gafa. It was one of Gafa’s first decisions as police commissioner.]

Who has the extracted data?

2.55pm Zahra says extracted data is held at The Hague and by the Central Investigations Division at police headquarters.  Europol have the full data, he says.

Judge Lofaro asks him whether the attorney general has a copy. Zahra says he does not think so, though he is not sure.

He says that there are eight police officials in the murder task force, as well as members of Europol and the MSS, but nobody from the attorney general’s office.

“The task force and Europol have the data. I cannot speak for the MSS,” the witness says.

Zahra says Europol will exhibit the data in the coming weeks, as court-appointed experts.

2.49pm Devices were seized and taken by Europol to The Hague in the Netherlands, he says. Data was extracted there.

Zahra says he cannot exclude it, as there are many inquiries under way which are distinct from each other. However, any data extraction related to the murder investigation was done at The Hague, he says.

2.46pm Zahra says that the murder probe continues to this day and describes it as being in “phase three”.

Police are working with Europol on the case, and a task force created specifically for the murder case now involves the homicide squad, Malta Security Services and Economic Crimes Unit, he says.

The task force has a dedicated meeting room at police headquarters in Floriana, he says.

2.42pm Zahra takes the oath and his testimony begins.

2.41pm We've just reported that alleged murder conspirator Yorgen Fenech wants testimony concerning him to be struck from the records of the public inquiry.

His lawyers filed a court application on Wednesday morning, warning that the inquiry was not following its own terms of reference.

What did Zahra say last time round?

2.36pm It’s been a few months since inspector Zahra first appeared before the board of inquiry. Last time round, Zahra said, among other things, that:

• Fenech had received a photo of the terms of a pardon granted to middleman Melvin Theuma.

• He had no cause to think that Caruana Galizia’s life was in any imminent danger before she was murdered.

Zahra also testified about other aspects of the murder investigation – and answered some sensitive questions in private. Brush up on the details by revisiting our minute-by-minute account of his July testimony. 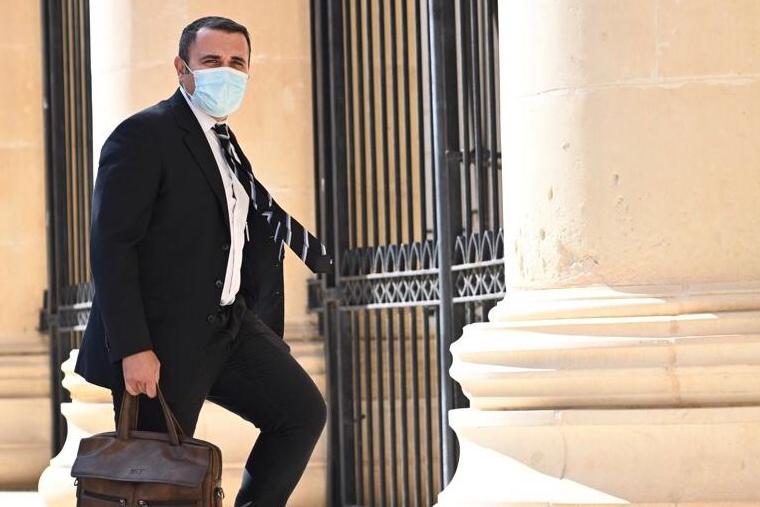 2.33pm Proceedings today began at 2pm in hall 20, but the press has not yet been allowed in, with the judges who make up the board of inquiry leading events behind closed doors for now.

Who will testify today?

2.30pm Inspector Kurt Zahra is the day's main witness, but the inquiry is also expected to hear testimony concerning a decision to transfer one of Daphne Caruana Galizia's sons, Andrew, out of a diplomatic posting right after the 2017 general election.

Carmelo Abela, who was Foreign Affairs Minister at the time, said under oath that he could not remember whether there was political pressure to force Andrew Caruana Galizia out.

2.25pm Good afternoon and welcome to this live blog. We're in the Valletta law courts, to give you minute-by-minute updates from today's session of the Caruana Galizia public inquiry.