Robert Abela was elected Labour Party leader early on Sunday morning, beating Chris Fearne in an election which he began as an underdog.

Around 92.5 per cent of the roughly 17,500 eligible party members cast their votes at 13 party clubs up until 8pm, after which ballot boxes were taken to the party headquarters in Ħamrun for counting.

The vote reconciliation process began shortly after 9pm on Saturday night. Dr Abela was announced the winner in the early hours of Sunday morning.

As it happened
Refresh for live updates

And that's a wrap

2.50am The protagonists have gone home and the crowds outside Labour HQ have now dispersed.

There's plenty to analyse following this historic election, but for now it's time to call it a night.

This blog will end here. Thank you for having joined us.

2.40am It took a bit of coaxing and a few pointy elbows, but Dr Abela's entourage finally managed to get the man of the moment into his car.

Some pushes and plenty of cheers: Dr Abela is finally whisked away. Video: Matthew Xuereb

2.27am There's been no sign or word of Mr Fearne, who must be bitterly disappointed after losing a race which appeared to be his for the taking, judging by how he was polling at the turn of the year.

From backbencher to PM

2.21am Three years ago, Robert Abela was not even an MP. Now he is taking over from Joseph Muscat.

Keith Micallef looks at the meteoric rise of Malta's next prime minister.

2.15am Robert Abela walked out of Labour HQ through the front door, right into the jubilant crowd of supporters waiting outside.

It was hectic, with grins all round.

1.49am Some clearly elated Labour supporters.

1.42am Joseph Muscat has just tweeted his congratulations to Robert Abela. The outgoing prime minister says he is "proud" to hand over to him and announces this will happen on Monday.

'There is only one winner today'

1.38am  Robert Abela speaks for the first time since winning the Labour leadership race:

"I am humbled. I thank my friend Chris (Fearne) and look forward to working together for the good of the party and country.
"There is only one winner today, the Labour Party. Now we must work hard to unite the country". 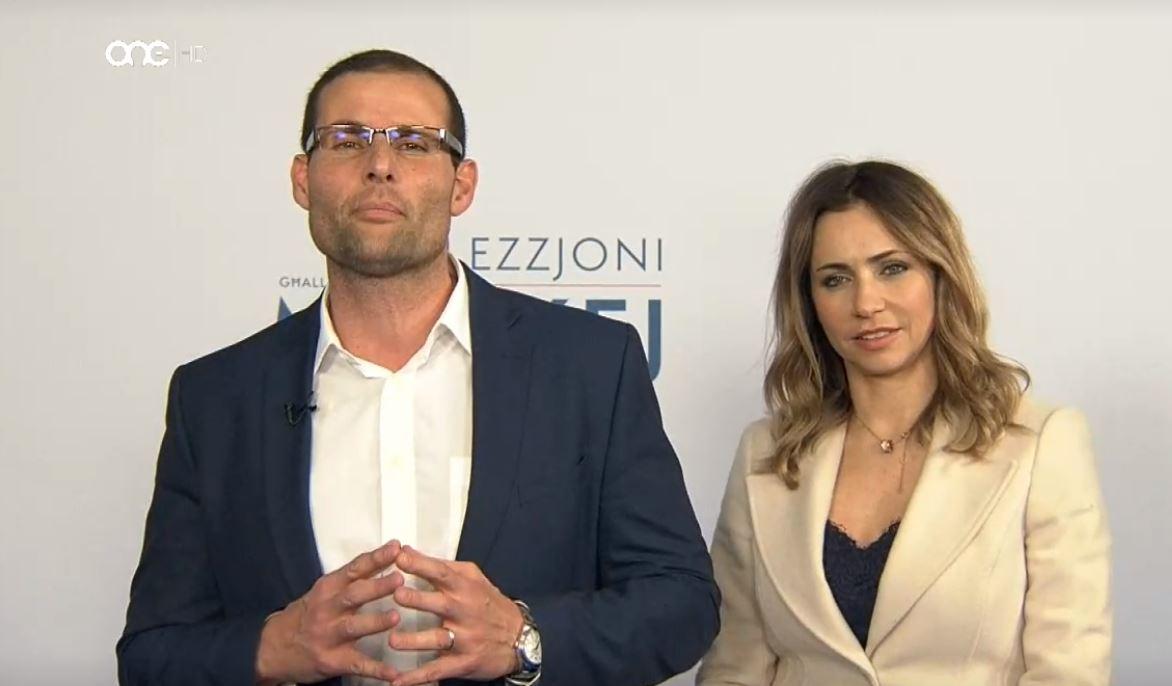 Abela due to speak

1.22am We're told Robert Abela is due to speak in the coming few minutes.

It's not just Chris Cardona: several other high-profile PL MPs are now lining up on social media to congratulate Dr Abela: Carmelo Abela, Julia Farrugia Portelli, Silvio Schembri and Justyne Caruana among them.

1.12am  A crowd has gathered outside Labour HQ, and they can be clearly heard singing and chanting over the relative silence inside the counting hall.

"Robert tagħna l-mexxej", ['Our Robert is the leader'] they chant.

Vote counting continues - with 28 out of 44 boxes counted, Abela has 58 per cent of the vote. 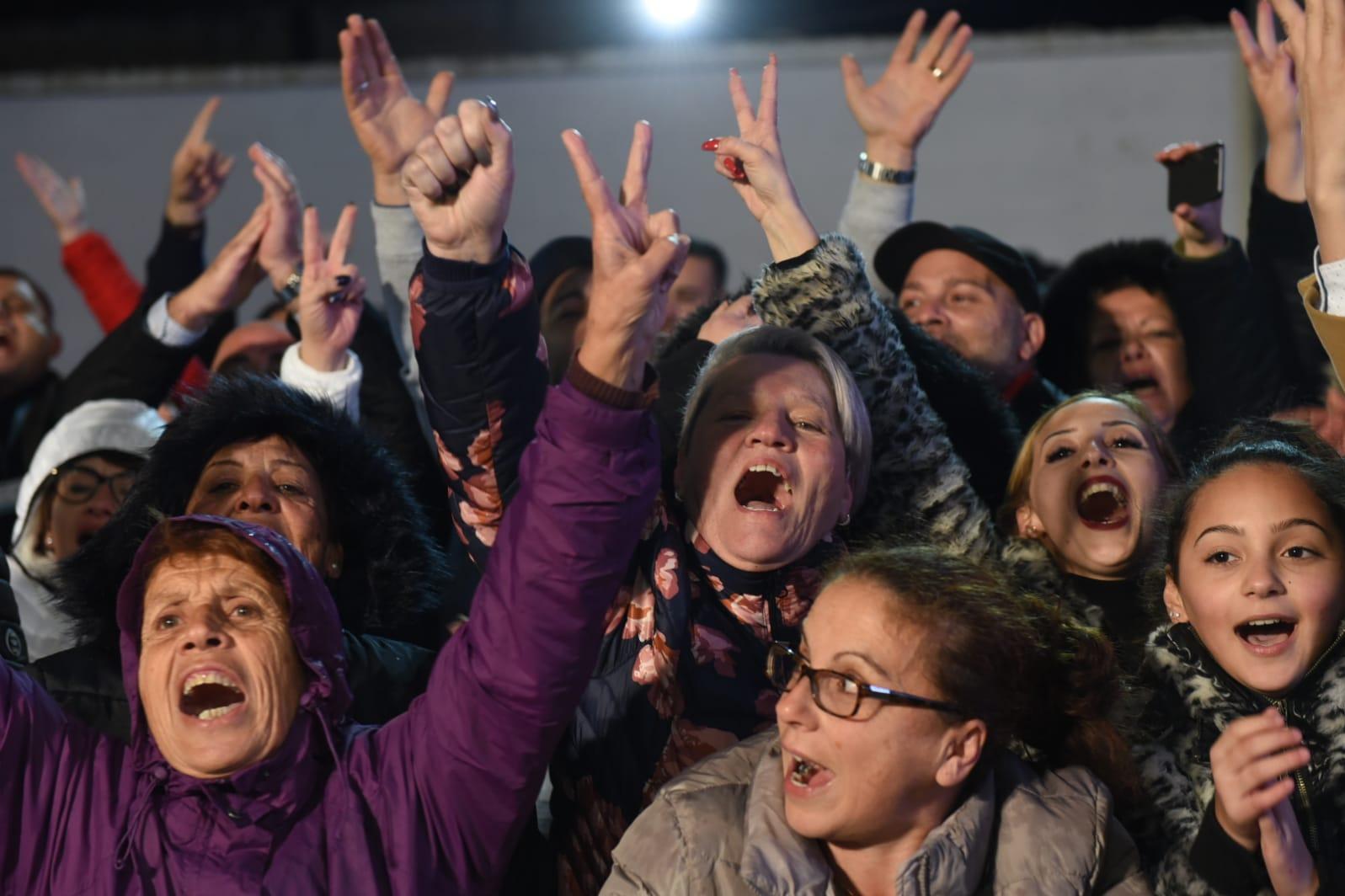 1.04am Robert Abela will be the Labour Party's next leader and Malta's next prime minister, deputy leader Chris Cardona has said.

Vote counting continues, but the margin of victory appears clear and his supporters can be heard celebrating. 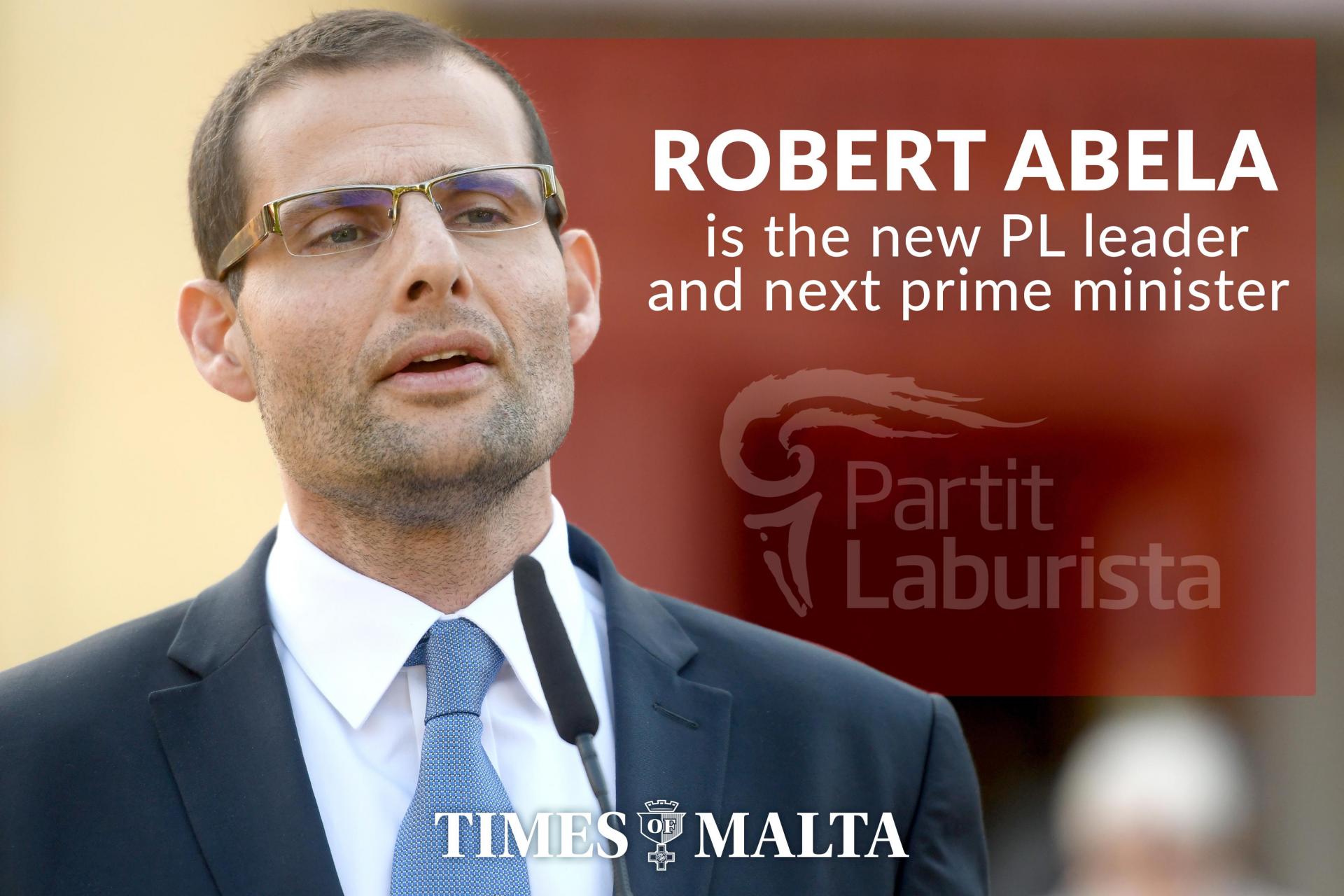 Chris Cardona calls it for Abela

1am Chris Cardona, who serves as deputy leader of the Labour Party, has called it for Robert Abela.

12.57am With half the boxes counted, Robert Abela continues to enjoy a strong lead of roughly 10 percentage points. He's currently on 59.7 per cent to Fearne's 40.6 per cent. 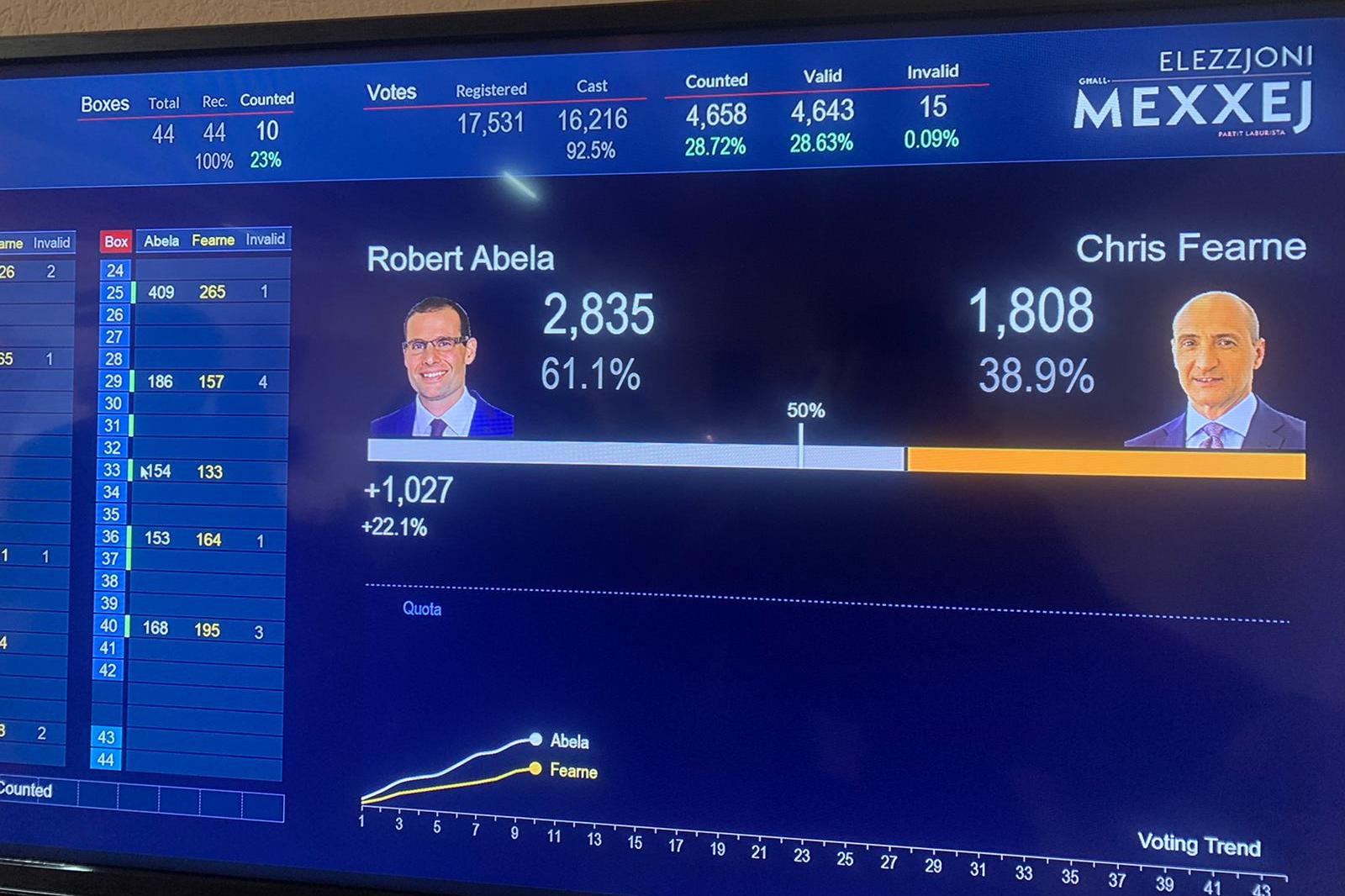 12.33pm Robert Abela has secured roughly two out of every three votes in the first five boxes of ballots and currently has 63.5 per cent of the vote. There are 44 boxes in all.

His supporters can be heard cheering from the next part of the building.

12.27am The first box of votes are announced, amid cries of 'Robert, Robert' as Robert Abela is announced the winner of the first box. 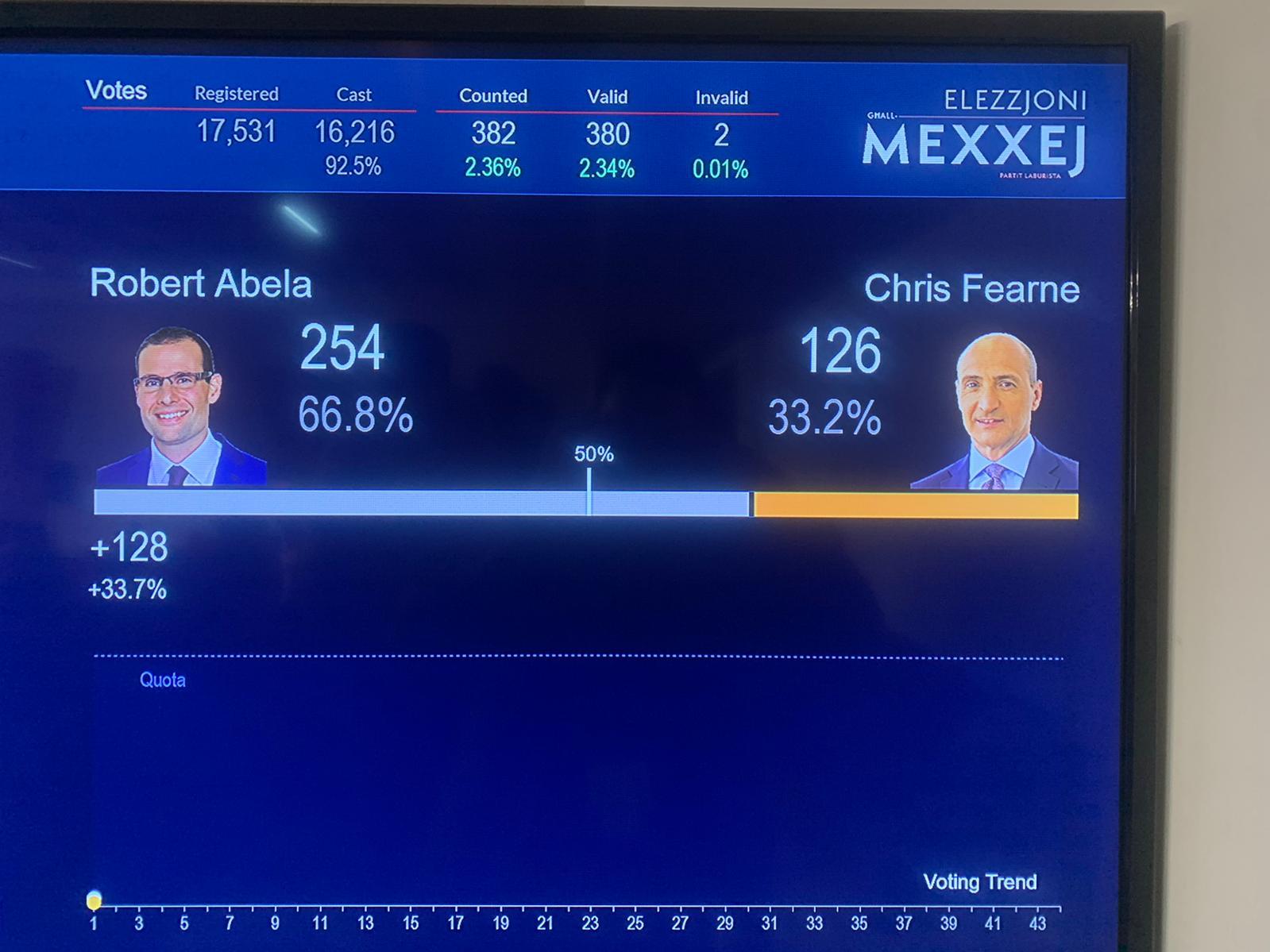 12.21am Neville Gafa’, the Keith Schembri aide who was sacked by Chris Fearne, has published a Facebook post proclaiming 'continuity' [Kontinwita’].

And PL deputy leader Chris Cardona has told TVM that it appears that one of the candidates has won by a relatively substantial margin. The catch: he declined to say which candidate.

A hum of activity

12.15am Party supporters are pressed against low perspex barriers as party officials sort the votes. There’s a hum of activity inside the makeshift counting hall.

As the sorting continues, the party’s electoral commission is also assessing dubious votes.

11.56pm Reconciliation discrepancies have been ironed out, and vote sorting has now started.

Reminder – at this stage, it becomes much more straightforward to work out who the front runner is. 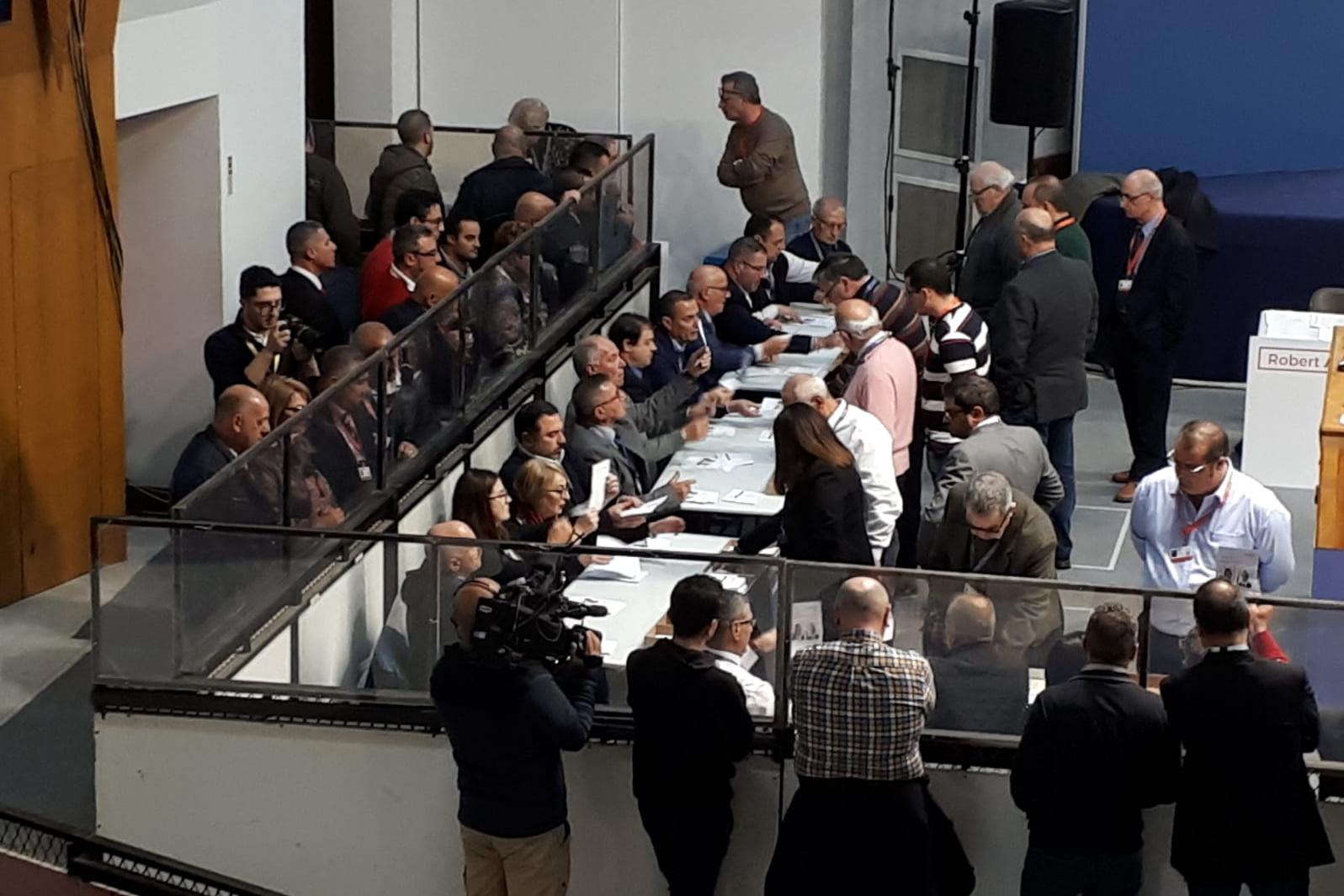 And they're off.. vote sorting begins.

11.32pm This is a very different election to the one the Labour Party held back in 2008. 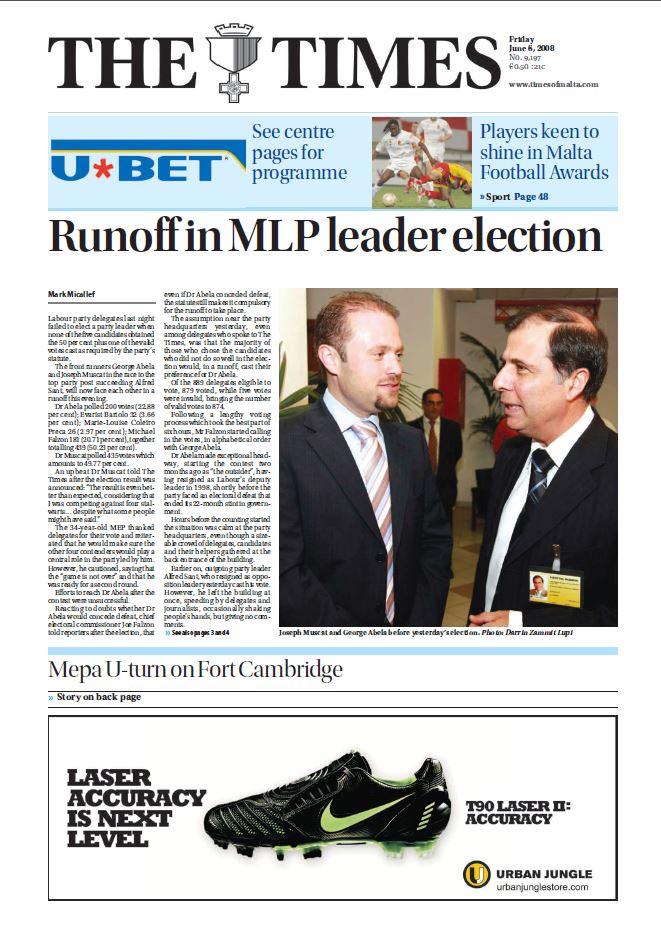 The 2008 Labour Party leadership election was a smaller affair.

Only party delegates could vote in that ballot, which began with a first round of five candidates who were then whittled down to two.

Today’s election, which was open to all party members who have paid their dues for five years [or three years for members younger than 21], is of an altogether different scale.

11.35pm Sources within the party tell us that preliminary samples suggest Robert Abela might just edge it.  But those same sources also add a caveat: the samples are not conclusive and the contest could still go either way.

Sampling of votes during the reconciliation phase is difficult, as each candidate’s counting agents do not get to see each ballot. They will only be able to do that once votes are sorted. That process will begin any minute.

We asked Louis Gatt, who heads the party’s electoral office, when we could expect an indication of a winner. He told us that we will probably have a reliable indication in an hour’s time. 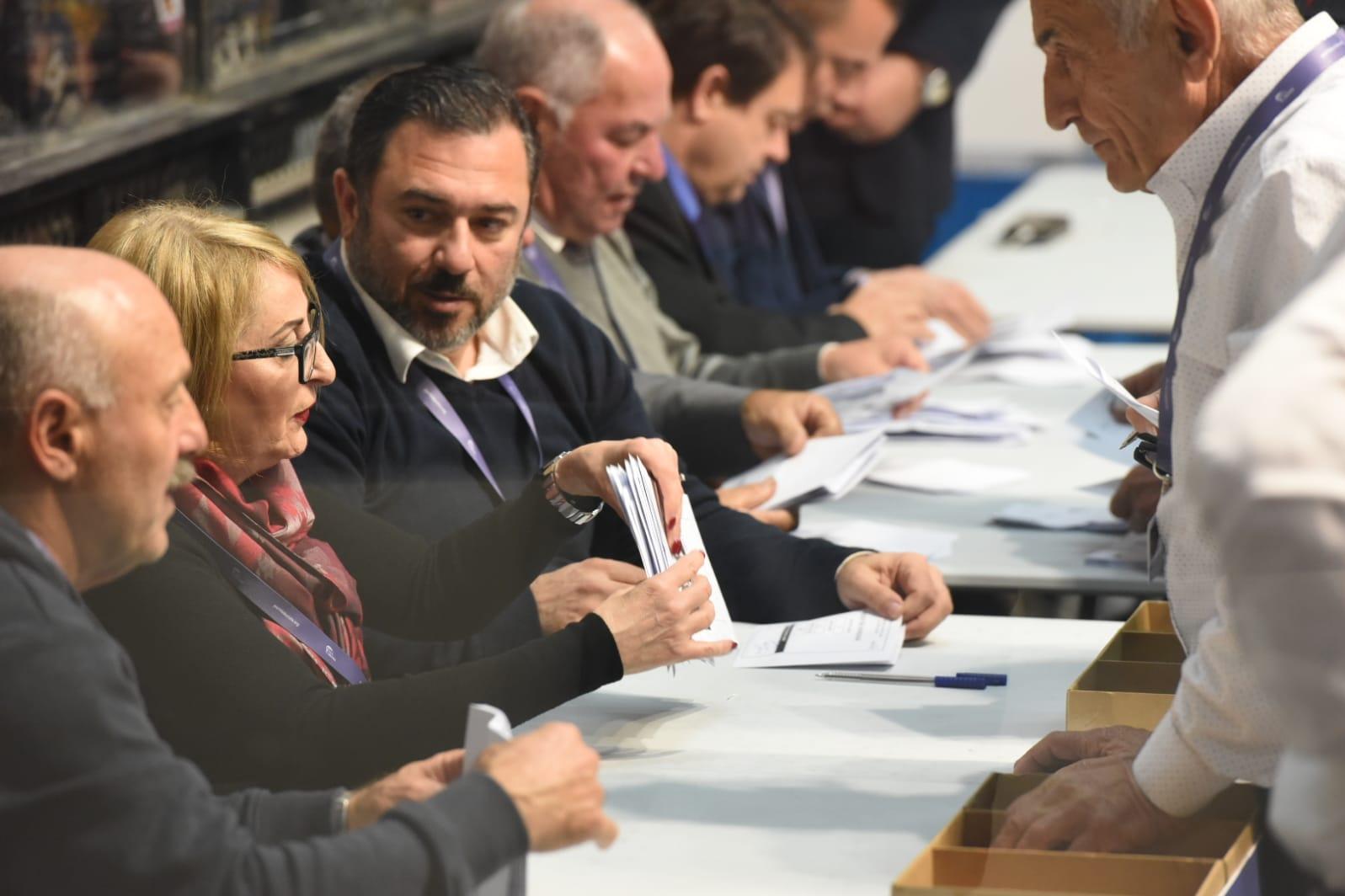 11.04pm Labour Party CEO Randolph Debattista is happy about the way the electoral process has progressed so far. He thanks all the party workers and volunteers who played a part.

It's been a busy week for Mr Debattista: one week ago, Robert Abela's camp filed a complaint about alleged vote manipulation. Mr Debattista had vociferously denied that claim.

10.50pm The vote reconciliation process is drawing to a close.

“Whoever needs a break, take it now. At 11pm we will start the sorting," Dean Hili was heard telling party electoral officials.

The sorting process is when electoral officials will sort the votes into piles of 50, according to candidate. It will most likely offer a good indication of who the winner is.

Once that is over, the election will enter its final, crucial phase: vote counting.

10.35pm As the vote reconciliation process continues, here's a reminder that this is actually the second consecutive Labour Party leadership race to feature a member of the Abela family as one of the candidates.  In 2008, Robert’s father George had come second in the race to replace Alfred Sant. He was beaten to the post by Joseph Muscat. 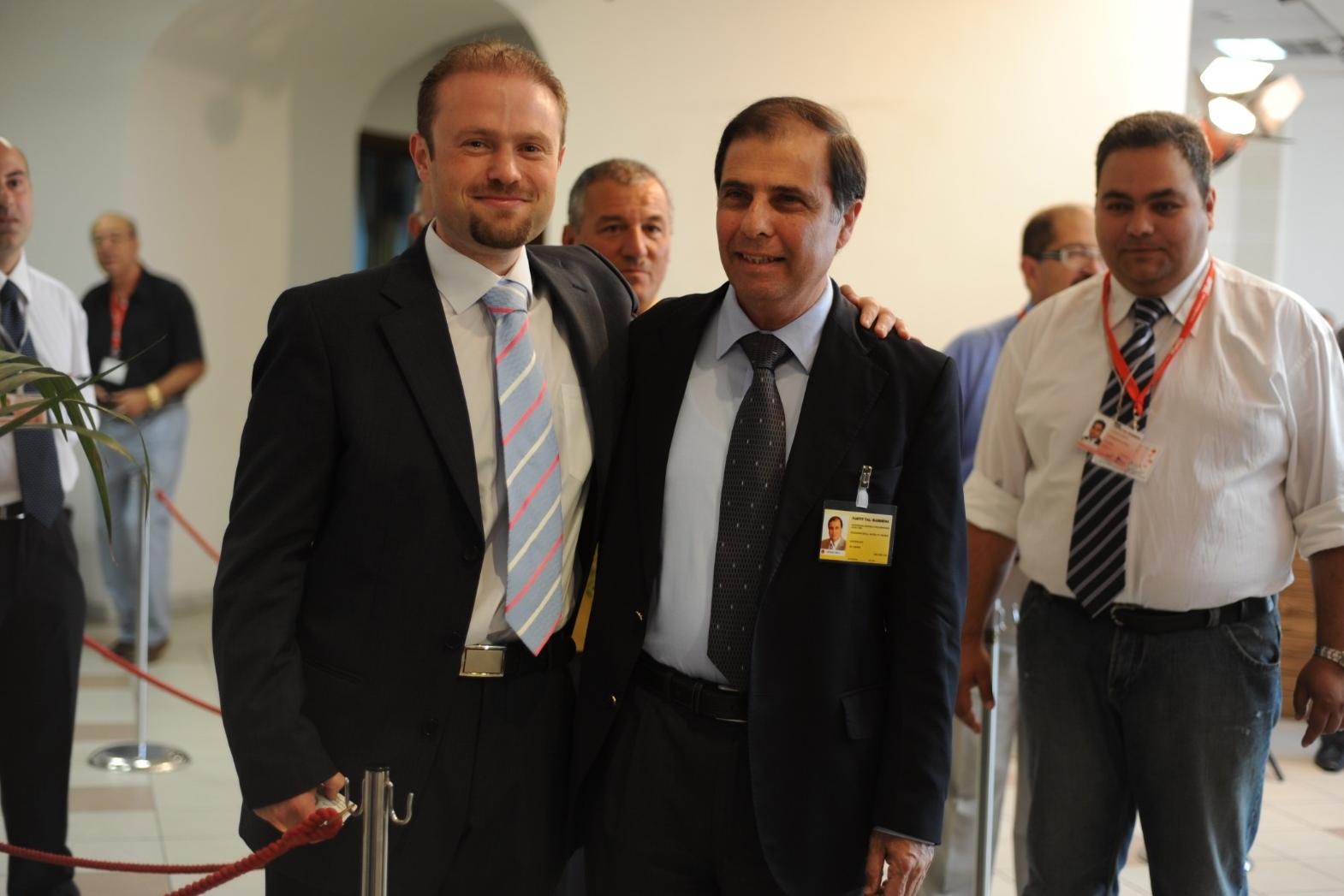 10.20pm Here's what Opposition leader Adrian Delia had to say about the PL leadership race earlier this evening: "Just because Joseph Muscat is leaving, it does not mean the government's sins and corruption will be forgotten. The public expects the new Prime Minister to clean up the criminality that has taken over Castille, and the Oppoisition will be insisting on real change for our institutions to be truly free and strengthened under the rule of law."

Speaking on Net, Dr Delia said as he has before that both candidates were too close to the outgoing Prime Minister to be able to offer real change.

Inside the counting hall

10.15pm With the last ballot boxes now having arrived from Gozo, here is what it looks like inside the counting hall.

10.05pm The outgoing Prime Minister Joseph Muscat lauded the "fantastic" turnout and sent his best wishes to both candidates. Meanwhile, on One, Labour Party supporters are being urged to attend a rally in Paola tomorrow to welcome the new leader, whoever it may be.

In the counting hall, all ballot boxes have now arrived and are being opened. Labour electoral office head Louis Gatt says the reconciliation process will take another hour or so, which could also be when we get the first indication of which way the race is headed.

9.50pm Our journalist Ivan Martin is in the counting hall in Ħamrun. Here he explains how the process will go this evening.

9.35pm A senior party source has told us the contest is "very close". We're seeing counting agents taking samples from the reconciliation process, which is not necessarily a reliable predictor in what seems like a tight race.

9.15pm On One, Labour CEO Randolph Debattista says more people voted in the election - around 16,200 - than did in the PN contest that elected Adrian Delia, despite Labour having tighter eligibility restrictions. This, he says, is a reflection of the deep roots the party continues to have.

Parliamentary whip Byron Camilleri says there is no question that the parliamentary group will back the new leader. "Regardless of our personal preferences, from next Monday we will all be gas-down behind the new leader, because that is what the party and the country deserve," he says. 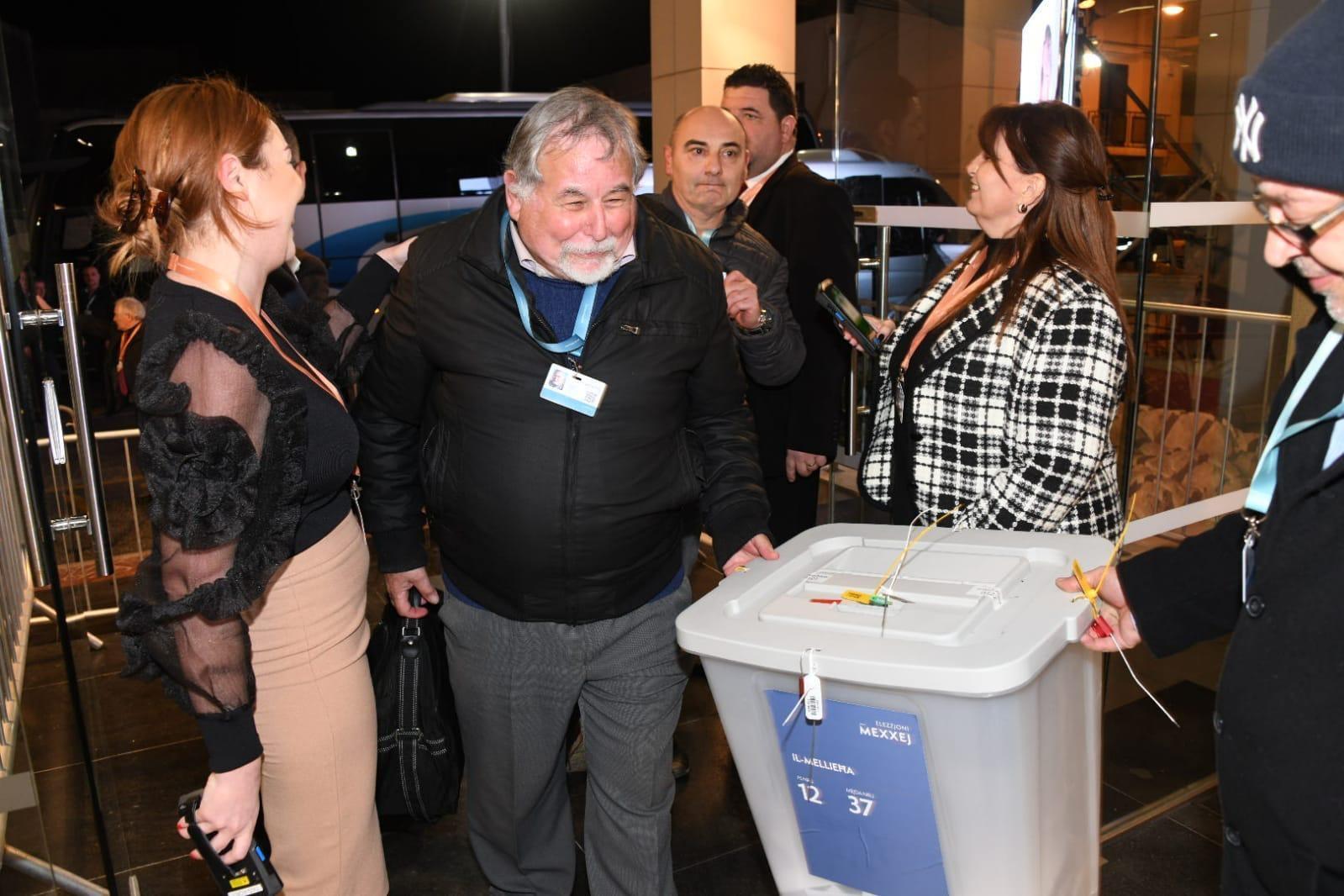 9.05pm Counters are currently reconciling the ballot boxes, a process of ensuring that each box contains the number of votes it should. Meanwhile, the two candidates posted messages of thanks to their supporters on Facebook. Robert Abela's team said their candidate had visited his grandmother in hospital shortly after the close of voting.

8.50pm We've heard that both candidates have agreed with the party's electoral commission not to take samples as the vote counting takes place. Counting agents say they haven't even brought pen and paper to keep track. In principle, this could mean it will take longer to have a clear indication of which why things are headed, but agents still expect to have a rough idea as the evening proceeds. Word around the counting hall is that things are expected to be close. 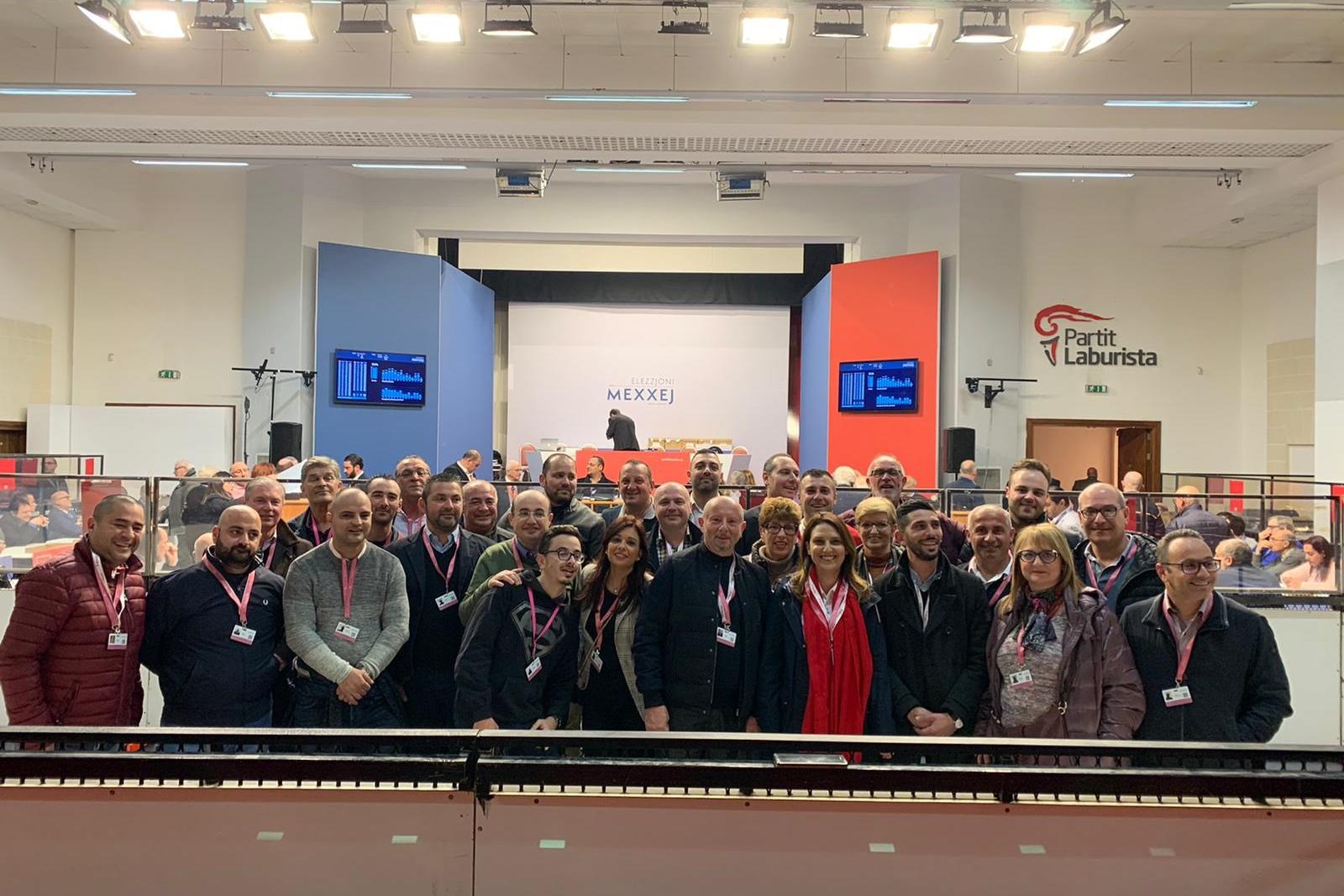 8.40pm Electoral commissioner Dean Hili told Times of Malta a final result was expected at around 1am or 2am. Before then, votes must be reconciled in each district before the sorting and counting process can begin. Ballot boxes are still arriving at the counting hall.

Official turnout is 92.5 per cent

8.30pm We have the official turnout figure, which is 92.5 per cent. Ballot boxes are currently arriving at the Labour Party headquarters for the start of the counting process. 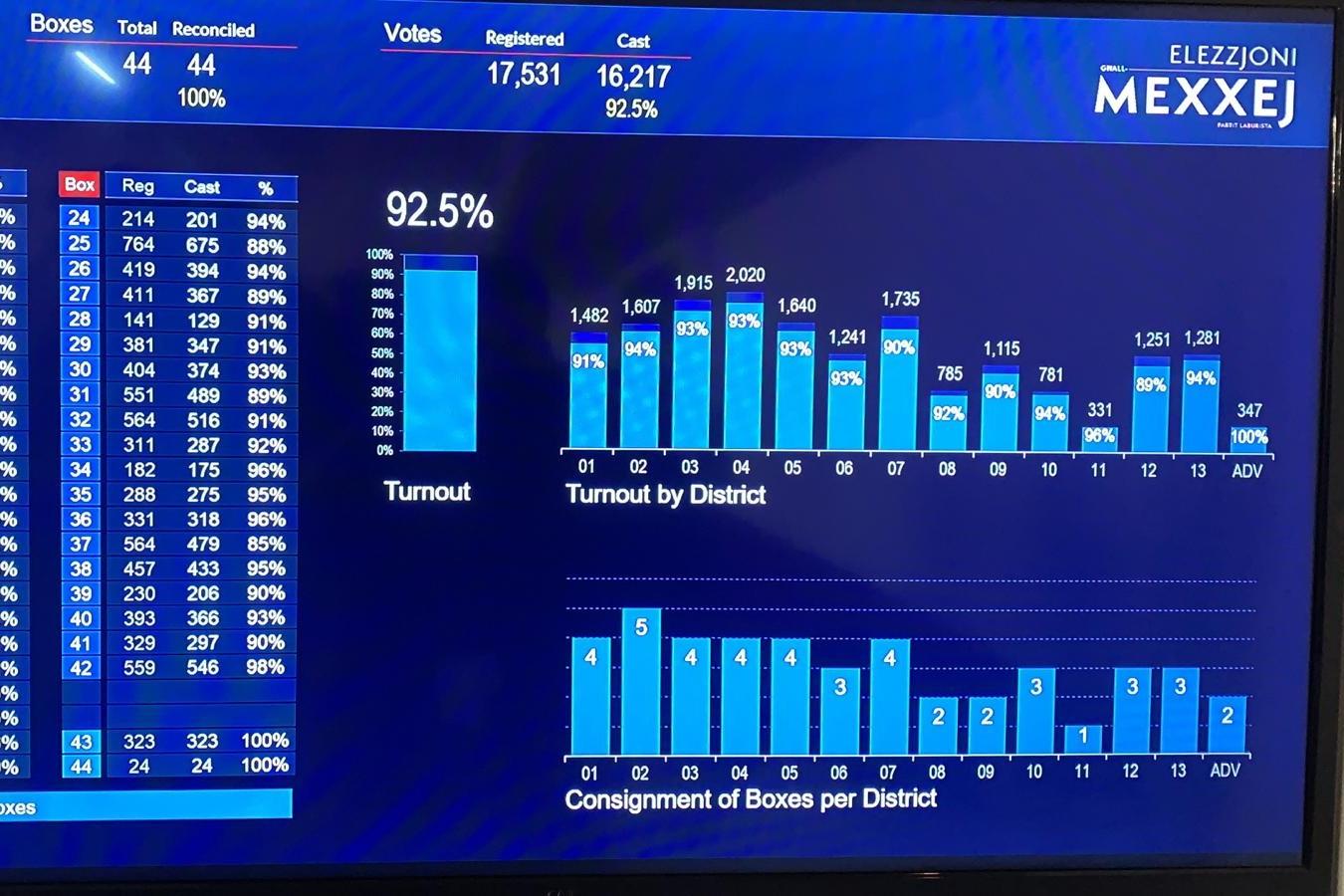 A word of warning on the polls

8.20pm Pollster Vincent Marmara has sounded a note of caution on the polls, which have suggested that Chris Fearne, who also has the backing of most cabinet members, enjoys a lead over Robert Abela.

Writing on Facebook, Dr Marmara said this was the first contest of its type to be voted on all by all party members, and that there had been an unusually high number - around 50 per cent - of those polled who refused to answer.

These factors and others, he said, had added a higher level of uncertainty to the polls.

"Just as in 2013 I said the PL was certain to win, in 2017 I said it would win again by a wide margin ... I have no problem saying that this time around, the surveys were not pointing to a certain winner."

8pm Voting was set to close at 8pm, with the main hall at the Labour Party headquarters turned into a counting centre for the evening. No word yet from the party on turnout figures.