Former chief of staff Keith Schembri will be facing cross examination by the lawyers of Yorgen Fenech, a former friend of his who now stands charged with Daphne Caruana Galizia's murder.

The development came at the end of a three-hour compilation of evidence sitting on Thursday.

Fenech denies the charges against him, insisting that Schembri was behind the murder of the journalist in October 2017.

In court testimony last year, it emerged that Fenech had told police during his interrogation that it was Schembri who wanted to murder Caruana Galizia and that he allegedly paid Melvin Theuma €85,000. Schembri has strongly denied the claims, saying he never spoke to the businessman about the murder.

Schembri is currently out on bail after he was charged with serious money laundering crimes, rattling one of Malta's once most-powerful men.

Several forensic experts testified in Thursday's sitting. Divers confirmed that six mobile phones had been picked up from the sea bed off the Marsa shed where three of Caruana Galizia's murder suspects were arrested in December 2017.

1.25pm Yorgen Fenech has a brief word with his lawyers before being escorted out.

The next sitting will be on April 14.

1.20pm Magistrate says the next hearing will take place on Wednesday. The plan is to get service providers to testify, as well as murder middleman Melvin Theuma, health permitting.

The last time Theuma was in court, the magistrate had to cut the sitting short because he was not feeling well. Just hours later, it turned out he tested positive for COVID-19.

Mercieca says that one fine day, the Attorney General might issue bill of indictment, effectively doing away with these cross examinations for ever.

Magistrate says Fenech's lawyers are to minute the names of witnesses they want to cross examine.

1.10pm AFM diver and sergeant Mario Chalp takes the stand next. He doesn’t recall the exact number of mobile phones he actually came across.

There were several dives. First two mobile phones were found on the first day, four others later, together with batteries and back covers.

A third diver, Ivan Falzon, takes the stand. He says the third mobile retrieved on December 6 was a Nokia.

Defence lawyer Mercieca asks the diver if he was consulted to prepare some notes last Monday.

"No, I just received the summons," Falzon replies.

Stephen Said is the last diver to take the stand. He says the mission was to find any items related to explosives. Four Nokia phones were found in total, all of which were handed to the police.

"Did your team members tell you what they did with the phones?"

Sant: "They were handed to police. It’s standing operating procedure. Our focus was the search. I cannot confirm 100% who the police officers were."

Mercieca: "How do you know it was police? Were they wearing uniform?"

Sant: "Only police were allowed there at the time. Some were wearing uniforms, others plainclothes. If I were to see them I could identify them but offhand I can’t tell."

12.50pm AFM diver Captain Matthew Sant says he was among those inspecting the seabed in December 2017 off the Marsa sheds where the murder suspects were arrested.

The order was to find any material related to explosives.

On the first day, the divers came across a mobile phone in the water, followed by others. They were recovered and handed to police, sealed in bags. Six phones in total were found.

12.40pm And as more witnesses are called to the stand, Yorgen Fenech requests permission to leave the court room.

He is seen limping out accompanied by a prison guard. He returns shortly afterwards.

12.10pm Four forensic experts are now testifying. They say they had carried out task at potato shed in Marsa where the alleged hitmen were arrested.

Their search also focused on other areas - the Marsa shed, a BMW parked close by, items lifted from the seabed, the Maya (the boat from which the explosive was allegedly detonated) and another boat moored nearby, and a Mercedes and Audi parked near the potato shed.

They also analysed a Toyota parked at Marina Street, Pieta and devices from a Siggiewi residence.

The witnesses confirm that the exhibits were handed from one expert to another.

12pm A police officer who photographed the wreckage of Caruana Galizia's vehicle says he too assisted Europol experts in his task.

All physical evidence had been presented in court at the Degiorgios murder compilation.

Inspector Charlo Casha says they had photographed an exhibit analysed by the NFI. He also took oral swabs from Degiorgio brothers (two of the alleged hitmen) for DNA analysis.

He was also the one tasked to deliver a number of exhibits to Europol in the Netherlands. He had submitted digital devices against signed submission forms.

11.20am A number of police officers and forensic experts are being called to the witness stand. Their testimony is short and procedural.

Most are merely confirming under oath reports that they had drawn up.

11am The file is found and the magistrate is back.

Scerri takes the oath. He confirms his report presented in magisterial inquiry and says he has nothing to add.

Arson expert Dr Vella is up next. He is shown a document in a thick file. He confirms that he analysed the explosives found on site.

Three of the samples detected presence of TNT.

He also says he handed three samples elevated from a particular spot, near St Joseph's farmhouse in Mosta. Those three he handed over to Magistrate Claire Stafrace Zammit.

Fenech is seen speaking to his lawyers. 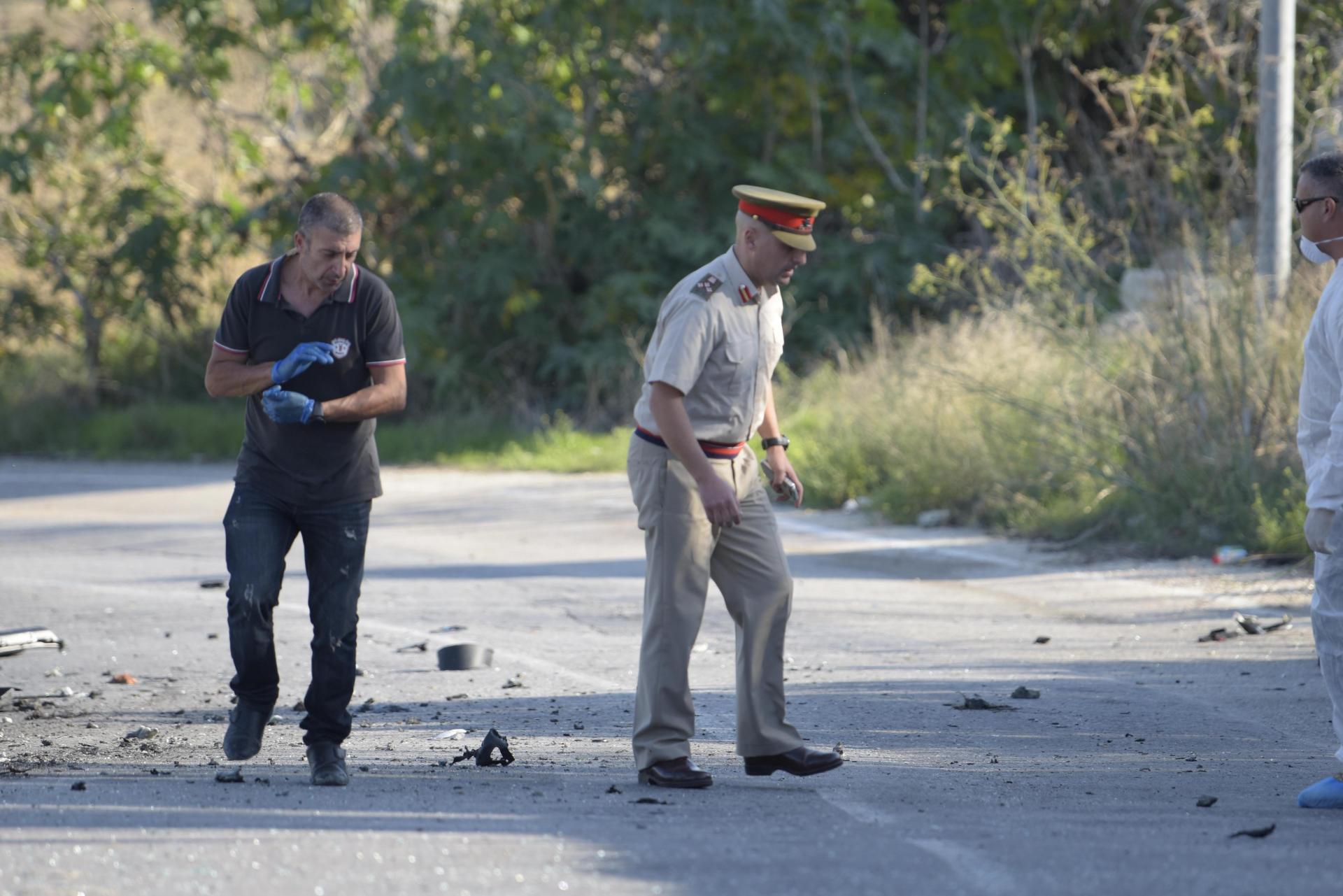 The wreckage from the bomb blast in October 2017. Photo: Mark Zammit Cordina

10.55 Pathologist Mario Scerri is next but the questions to be put to him are based on evidence contained in a file that has not yet been brought along. The magistrate walks out of the hall until the file is found!

We're used to these kinds of hitches by now.

10.45am Yorgen Fenech is escorted in. Two guards sit behind him.

Pathologist Ali Sarfraz takes the stand. He says Caruana Galizia was killed as a result of multiple blast injuries. That's all from that witness.

10.40am We're finally inside the hall. Armed security personnel are going around the hall, as family members of the accused and the victim take their seats.

10.20am We've been asked to shift from hall 20 into hall 22. Just one problem - the hall is still shut and there's a sizable crowd waiting outside, including witnesses, lawyers and the media. You'd have thought they'll figure out the logistics beforehand.

The health authorities would not be amused to witness this scene when they're asking the country to take maximum precautions because of the pandemic!

The hearing was meant to have started at 10am.

Yorgen Fenech: a business tycoon and heir to a family fortune, and the man in the dock: Fenech is accused of complicity in Daphne Caruana Galizia's murder;

Melvin Theuma: a taxi driver who worked for Fenech and who has testified that he served as a middleman between Fenech and the alleged hitmen;

Vince Muscat: The only man who has confessed to his role in the murder;

Keith Schembri: a friend of Fenech's and the chief of staff to Joseph Muscat when he was prime minister;

Kenneth Camilleri: a staff member in the office of the prime minister;