Malta is set to get a second electricity interconnector linking the island to Sicily after Cabinet gave the project the thumbs up, Energy Minister Miriam Dalli said on Tuesday.

The 200-megawatt cable is expected to cost €170 million and will run parallel to the existing interconnector that links Malta with Ragusa. It is expected to be completed in 2025.

Speaking at a press conference at the Enemalta station in Magħtab on Tuesday, Dalli said that a study undertaken by an international consultancy firm,  France Electric, had concluded that the best way to meet the projected growth in electricity demand was through a second interconnector.

The PN reacted by noting that it had included a proposal for the introduction of a second interconnector in its energy plan launched in February.

Existing interconnector facilities in Malta and Ragusa are already equipped to support a second cable, the minister said.

The government had looked into using alternative connection sites in Italy, as well as Tunisia and Greece, however these were all more expensive.

The interconnection project will help cut emissions from the energy sector by 58%, Dalli said.

Demand for electricity has climbed by 18 per cent over the past four years and is expected to rise even further in the coming years, as more vehicles go electric, shore-to-ship power projects come online and the economy grows following the COVID-19 pandemic.

Supply has also been rising to meet demand, reaching 2,077 gigawatt-hours in 2019, the most recent year for which data is available. That year, 656.8 gigawatt-hours of power were imported through the existing interconnector. 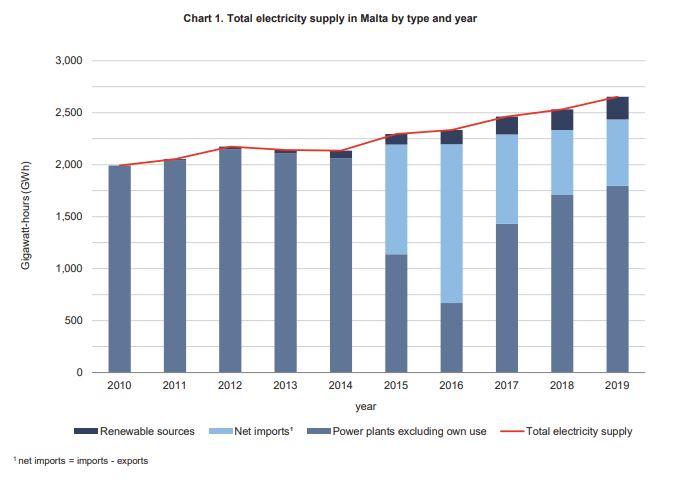 With cabinet having approved the plans, the project will now move on to a technical phase, as experts carry out seabed studies and update technical plans. The government would then be issuing a call for expressions of interest once the necessary planning and environment permits were renewed, Dalli said.

The interconnector connects Malta to the European power grid, allowing Enemalta to purchase electricity from the continent rather than have it generated locally.

Electricity bought through the interconnector is far cheaper, with a National Audit Office report finding in 2018 that prices were almost half that bought from the Electrogas power station.

Enemalta had disagreed with that report’s findings, saying the NAO analysis, saying it purchased power through the European grid when rates were low, to take advantage of lower prices.

Despite interconnector prices being cheaper, Enemalta is contractually bound to purchase a minimum of €131.6 million worth of LNG from Electrogas every year.

Fixed prices are locked in to Enemalta's 18-year contract until 2022.

The PN's Ryan Callus said it did not "bode well" for the second interconnector, which "despite offering the lowest electricity rates, is being limited due to the contract with Electrogas".

"From the moment Electrogas was switched on, the present interconnector
reduce its use from about 87% to 25%," he said.

Malta's existing interconnector - a 120km-long high voltage alternating current (HVAC) system that can transfer 200 megawatts of electricity in either direction - was inaugurated in 2015, having first been announced by the 2008 Lawrence Gonzi administration. That project cost around €182 million.

In Sicily, the interconnector is linked to the Italian network at 230kV at the Terna substation in Ragusa. The submarine cable lands in Malta at Qalet Marku, Baħar iċ-Ċagħaq and transmits electricity to the distribution network at 132kV through a nearby Enemalta terminal station at Magħtab.

The subsea circuit is approximately 98 kilometres long. In December 2019 it was sliced open by a ship’s anchor. The extensive damage caused a nationwide blackout followed by intermittent power cuts in the ensuing days across different parts of the island.