In the last of a three-part article, Joe Zammit Ciantar reminisces about Xlendi during his childhood days, shares his nostalgic feelings for the hamlet as he once knew it and his concern about how it has developed over the years.

My father’s parents, who were born and lived in Xewkija, were Mikiel Zammit and Francesca née Ciantar. All I know about nannu Mikiel’s family is that he had a brother, Salvu, who married a French woman and settled in Lyon, France, in the 1950s. On the other hand, nanna was the only one among her brothers Fr Pawl, Ġanni, Ġużepp and Salvu, and her only sister, Marjanna, who was married. Her sister and brothers – who owned Il-Magna tal-Għaġin, one of the few pastry-making factories on the island – lived and died single.

None ever owned a car. They used to travel on a horse-driven cart. Both horse and cart were kept in a remissa, a large garage in between the houses and the old traditional pastry-making factory building they owned in Racecourse Street, Xewkija.

One day, my family went to Xlendi where we stayed longer than usual, at least until very late in the evening. At one point, two of the Ciantar brothers and sister, and nanna Ċikka, joined us on the rocks near where ‘Churchill Restaurant’ is today. There we sat together, with our feet in the sea. 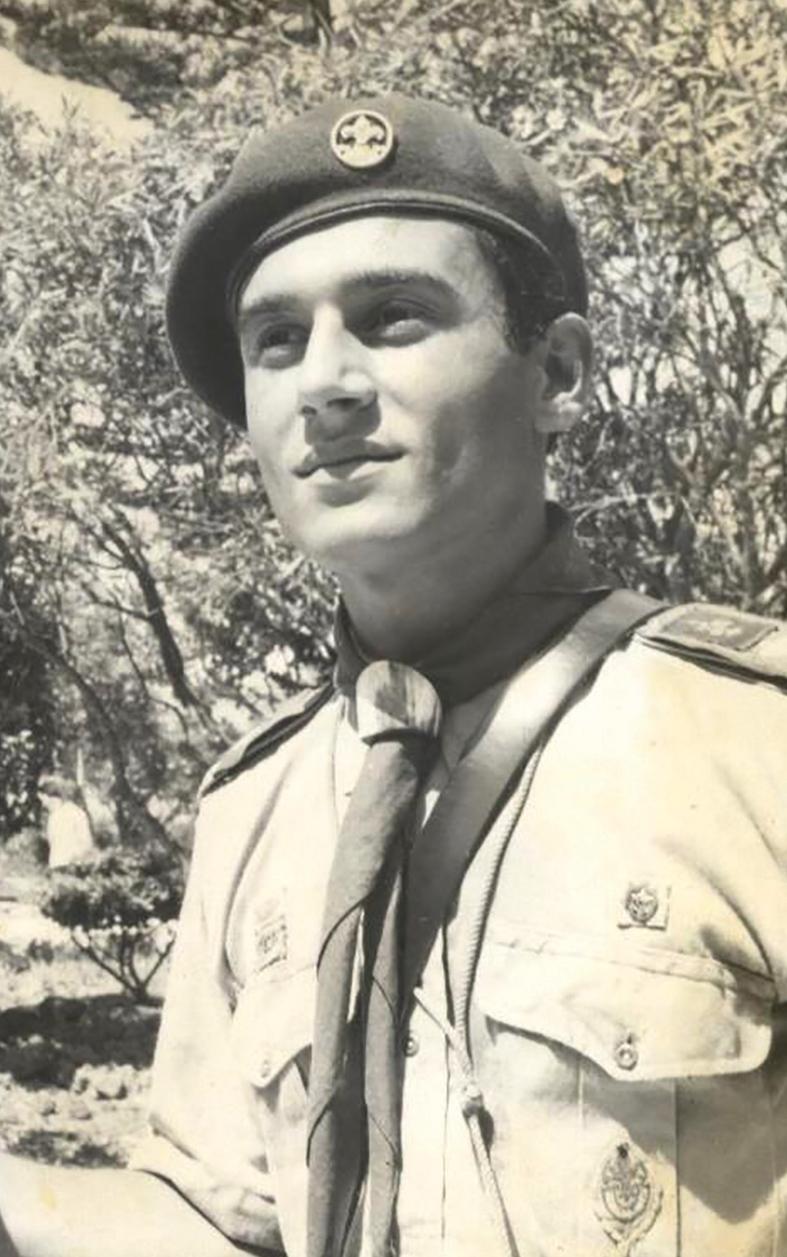 The sun had already set and darkness started enveloping all around. It was at this time that I saw my father’s mother, aunt and uncles change into their ‘swimwear’ and go in for a dip. It was the only time I witnessed this scene!

Nanna and Marjanna wore one whole white ‘flanella’ (flannel) dress, covering them from neck to wrists and ankles, while the men wore long white shorts and shirts.

After a short while, they came out of the water, changed and left. They arrived in Xlendi on a horse-driven cart led by uncle Ġanni and, likewise, made their way home to Xewkija.

This is a fragmentary nostalgic experience of my very dear zijiet tar-rispett (in-laws) and nanna swimming at Xlendi. 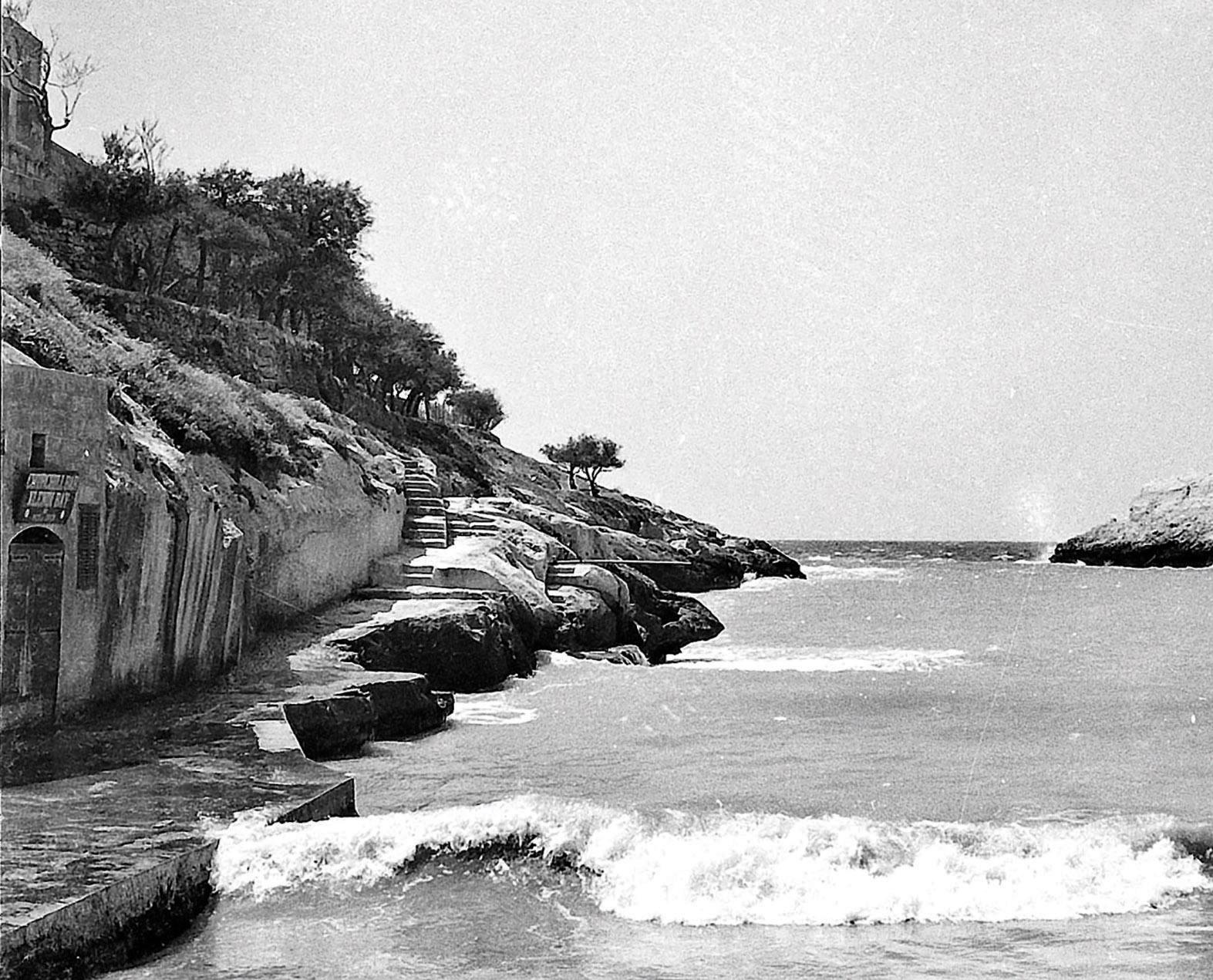 The promontory (far centre on the left) where the author used to go fishing as a child. Photo: Kikku Cremona

Wiġi was an old, well-built man in his 80s who lived with his wife, Theresa and family of four next to us, in Victoria. 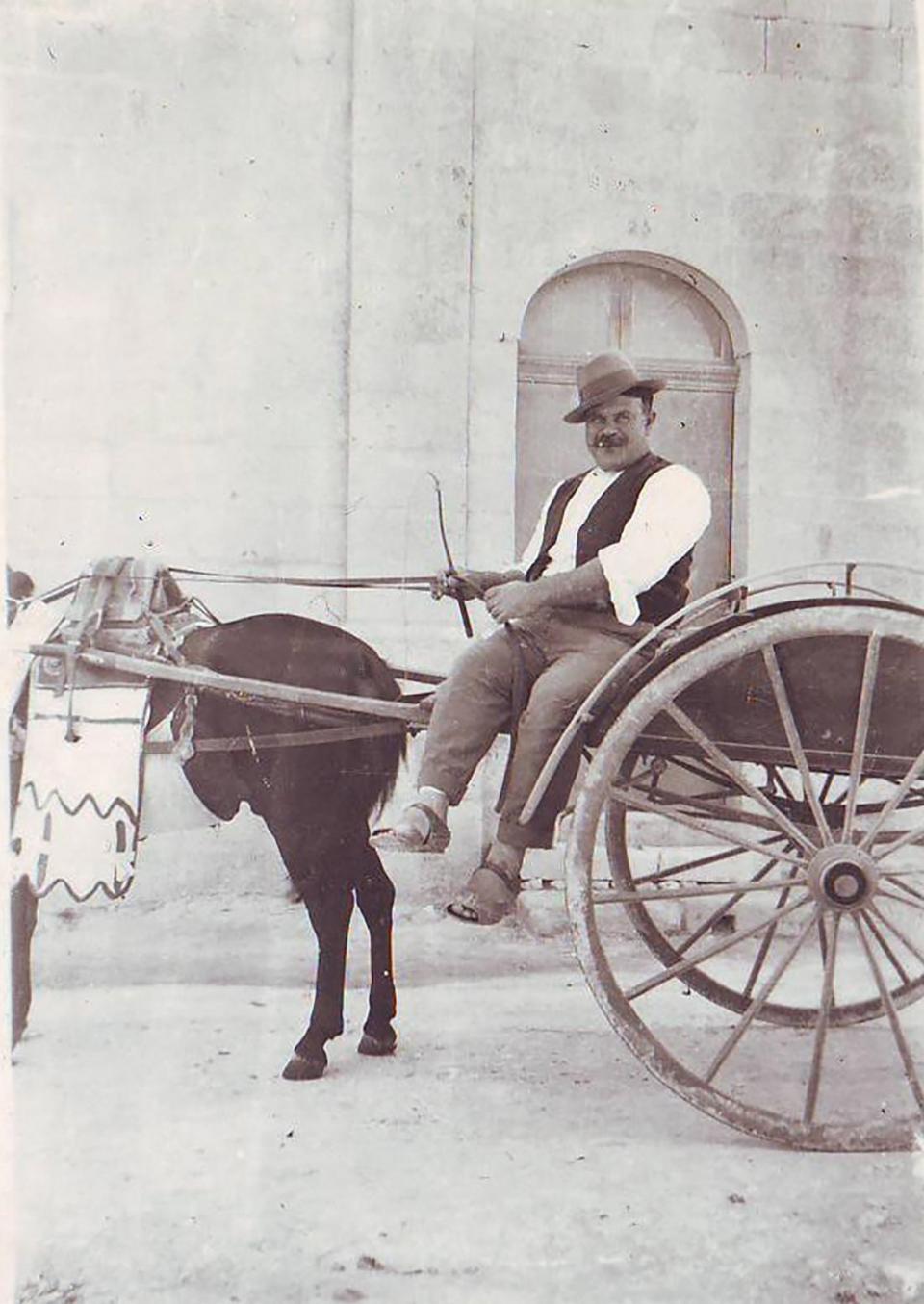 He was a fisherman. When I was 15, we would spend hours sitting on our doorstep playing bixkla – the Italian briscola. And while playing he would narrate accounts of ­– and perhaps fantasise about – his adventures at sea.

One day, I asked him to help me start fishing with a rod. He taught me how to tie a hook to the line, helped me build a fishing rod and prepared for me an expert’s bait ‘that would attract’ all the fish in the sea.

The following day, with fishing rod and bait in a tin, I took out the 28-inch army bicycle with wooden pedals we had at home and prepared to go to fish at Xlendi early in the morning. Soon, my younger brother Anton told mum he wanted to join me.

It was an easy way down to Xlendi with the bike. Once there, we walked along the path on the rocks on the left-hand side of the bay and found a place on a promontory from where I could try my fishing rod.

I prepared it and asked Anton to fetch me the small coffee-tin with the bait from my bag. He took the tin in his hands and started approaching me when, all of a sudden, he fell, dropping the tin. It rolled over the rocks and fell into the sea below us. I was furious and very disappointed. I packed up and, with fishing rod, Anton and bicycle, walked all the way up to Victoria, empty-handed. 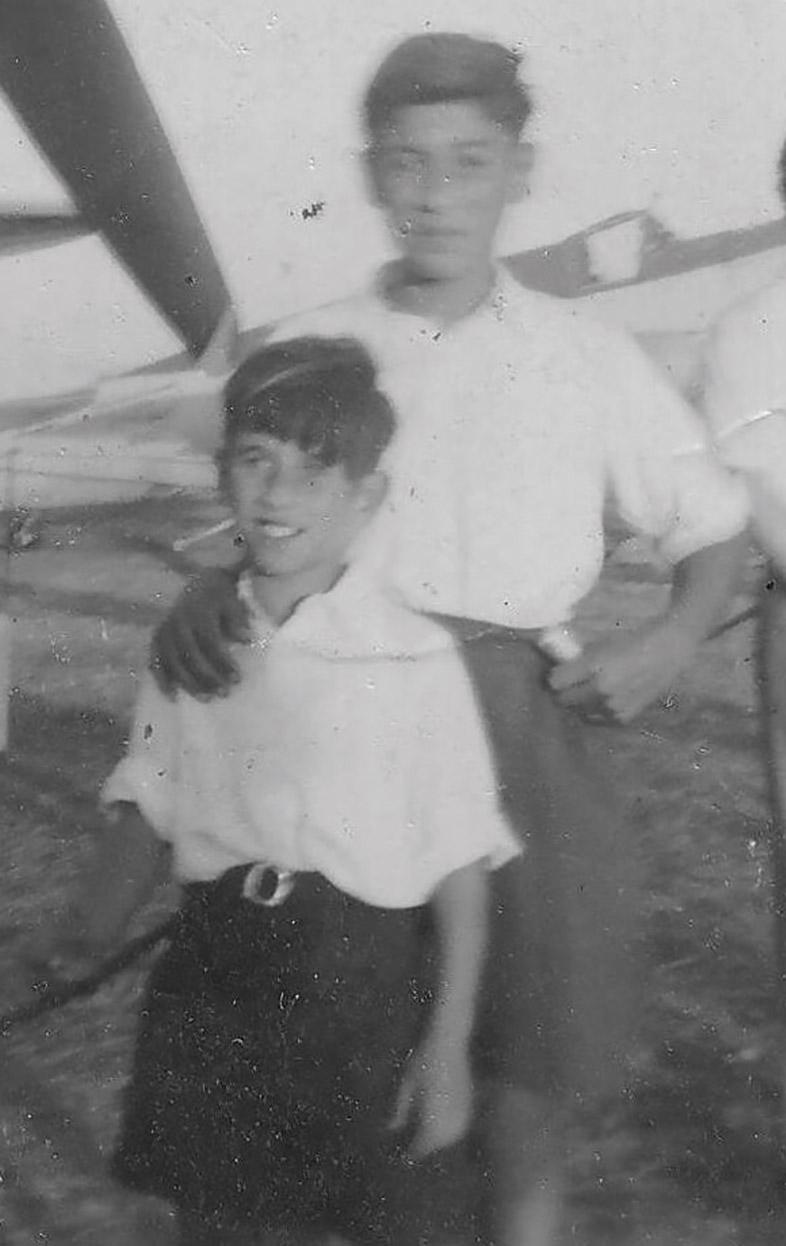 Later on in life, I used to spend hours rod-fishing with worms and artificial bait and I must say that, sometimes ,I was lucky enough to bring home some quite large fish. But that first fishing experience in Xlendi still lingers on in my memory.

A storm to remember

In September 1955, the Sliema Scout Group, led by Scout Master Edward Tortell, camped in one of the large fields behind the row of houses on the side of the street in the front of the bay.

A heavy rainfall ruined the camping. The torrential rains that gathered in Xlendi Valley swept debris and soil and went on to reach the sea.

The scouts had to seek shelter, which they were given at St Patrick Hotel.

The tents where the scouts were living lay in about a metre of silt, soil and debris.

Everyone was talking about the heavy rainfall that fell on Gozo

However, Xlendi was the victim of yet another harsher storm in 1964.

It was Wednesday, August 26, and the weather was very warm. I was 22 years old, living with my family in a modest house, in Sannat Road, Victoria. I was going to start teaching the following September.

The night was approaching.

As usual, I had placed two blankets covered with a white sheet, and a pillow, on the dark grey cemented slippery floor of our balcony. There I used to spend the night during the hot summer, looking up at the sky as if trying to count the stars, careless, thoughtless, undisturbed by the occasional engine-roar of cars that had started to pass along our road, which linked Ta’ Sannat village to my home town.

The night sky that evening was unusually profusely lit by frequent lightning that started to be longer and brighter as midnight approached. Then sleep, wonderful restful sleep, slowly took over.

The following morning everyone was talking about the heavy rainfall that fell on Gozo the previous night. The worst hit were Xlendi and Marsalforn bays. 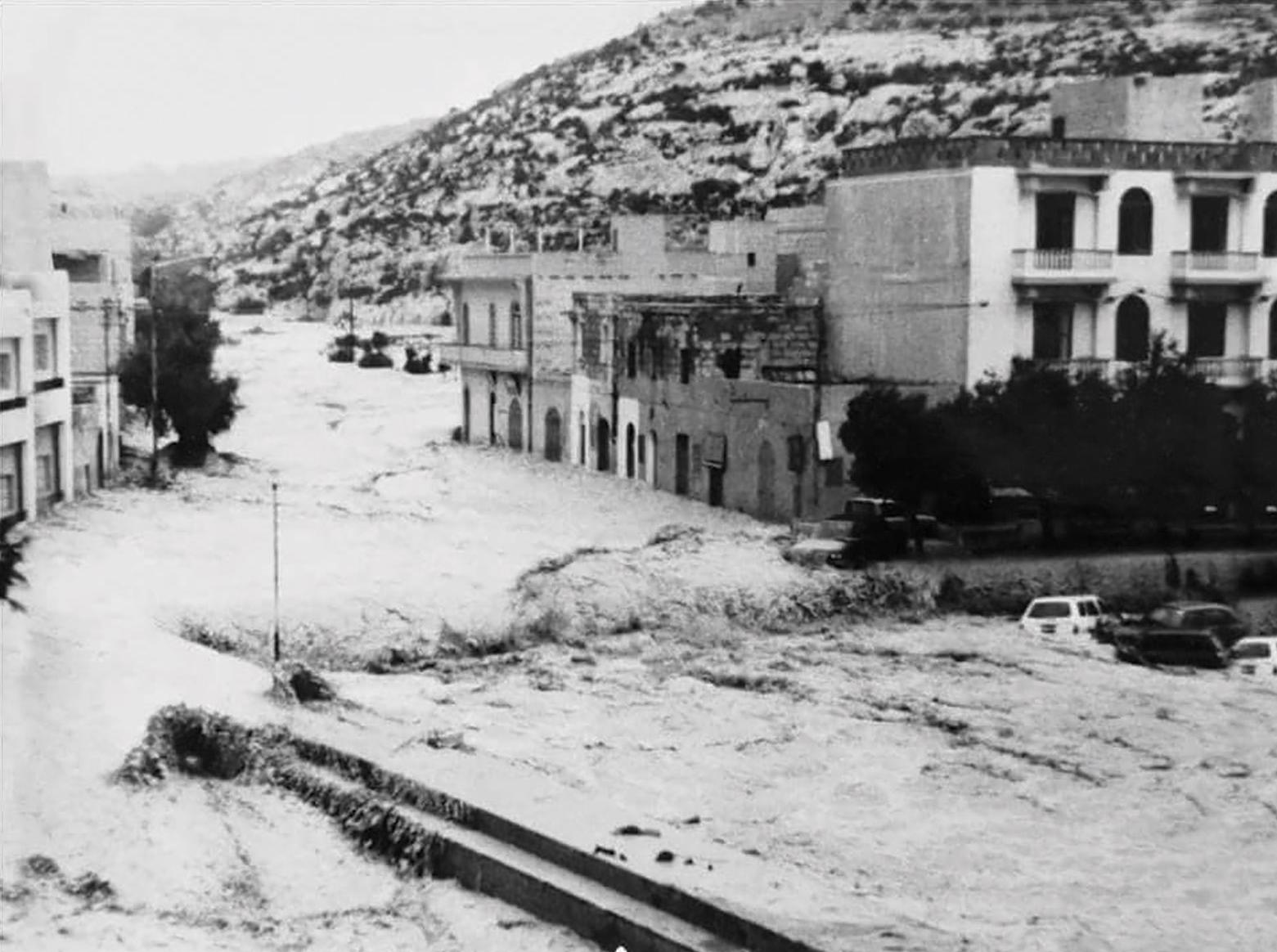 The murky waters gushing down Xlendi Valley into the bay, after a similar storm that hit Gozo on October 12, 1979. Photo: Joseph Karl Bajada of the Facebook page Retro Gozo.

Popular singer Ray Ritardo (Joe Pace) was one among those whose car was carried away into the sea at Marsalforn.

The enclosed sea was one bath of murky whitish water, with a lot of furniture, some cars, dead fowl and even dead cows floating about.

Wiġi Vella, an 82-year-old from the village of Ta’ Kerċem, was carried away with the rainwater that flowed down Lunzjata Valley, onto Xlendi. His corpse was recovered from the sea miles off the south of Malta days later.

In the large open space at the end of Xlendi Valley, next to a field behind the row of houses on the street in the front of the bay, there were – again – some English scouts (children of servicemen in Malta) camping. Fortunately, before the rage of the torrential waters reached them, they were taken to the police station where they spent the night. Although nobody was hurt, they lost everything, including a box that contained £90. The tents in which the scouts were camping were submerged in a metre of mud and filth carried by the running waters coming down from Kerċem, Victoria and Munxar, and which gathered in the valley, gushing towards the sea in the bay, carrying with them all the debris and branches and other objects in their wake. 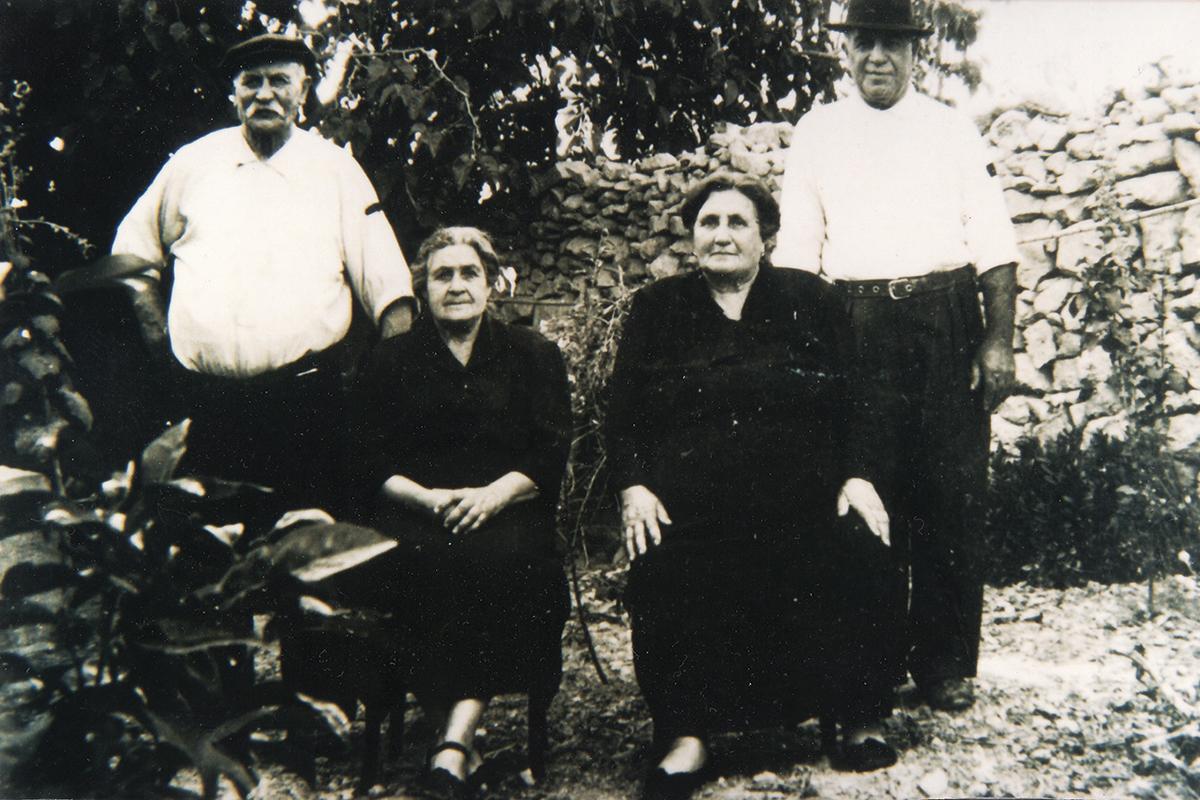 The uncles of the author’s father, Ġużepp and Ġanni, with his aunt Marjanna and Nanna Ċikka (seated on the right). Photo: Joe Zammit Ciantar

It remained a storm the Gozitans who had lived through the experience kept talking about all their life.

The wild waters had caused havoc in Malta too, with fields flooded and trees uprooted. The Strand, in Sliema saw some heavy seas and boats were overturned or sunk, fields with tomato plants and vines were ruined, rubble walls collapsed and roads and bypasses were blocked with stones, rubble, soil and silt.

Fortunately enough, some magic offered by my Xlendi may still be enjoyed.

The sun – that has witnessed all the changes that the bay has gone through many centuries from since it was used as a harbour by the Phoenicians – has never betrayed her charm when setting.

It has never ceased to bewitch the beholder with indescribable spectacular colourful skies before it descends on whatever mood is the stretch of sea bet­ween her and the bay.

And, today, although the tranquillity of yesteryear is gone and the nights are no longer frightfully deserted, the artificial lights put up by man create magical scenes that make up for the nostalgia I feel when recalling the quaint hamlet of my younger days, the bay I loved so so much... Xlendi.