A delegation of MEPs on Tuesday said investigators in the Daphne Caruana Galizia case were "doing a professional job" but they were "unconvinced" by explanations given by the Prime Minister.

The delegation led by Dutch MEP Sophie in’t Veld met with Muscat first thing in the morning, and then met senior police officers at police headquarters.

In comments to the press waiting outside Auberge de Castille, the Dutch MEP said that she did not come out of the meeting with Dr Muscat with more confidence, insisting the Euro-parliamentarians’ concerns were not addressed.

“We can talk for a long time about the details of the case but ultimately this is about truth and credibility of the highest political office here.

“It is difficult to see how the credibility of his office can be upheld.  Politics is about trust and it’s about the integrity of the office. This is not about the formalities,” Ms in’t Veld said.

The MEPs, she said, made it “very clear” that the Maltese government has a problem. They also insisted the issue is not between the prime minister and the Maltese people but between Malta and the EU.

“Cooperation in the EU is based on trust and I thought this was very evident to everybody, but that trust has been very seriously damaged. We’ll see what we hear in the next day and a half, but I am not coming out of this meeting with more confidence,” she said.

The Dutch MP, however, later had good words for the investigators.

Speaking after the delegation’s meeting at police headquarters she said: “Yes they are working very hard, It is not over yet, and they are doing a professional job.”

She noted that Europol is being involved in the investigation, although he did not know to what extent.

Asked about Keith Schembri’s release from arrest she said that was "a point of concern" but she could not say much.

“Our delegation is extremely concerned that somebody whose name pops up in so many different cases is free. That is very difficult to explain to people.”

Asked specifically if she was satisfied with the replies she got on Mr Schembri’s release, she said:

“You can’t be satisfied if somebody if still out there if you get the feeling that they are guilty of very serious crimes, but there is due process. You cannot just go about arresting people, you have to have hard evidence, but that is not easy at this stage.

The MEPs are in Malta for an urgent fact-finding mission in the wake of the Daphne Caruana Galizia murder inquiry.

The delegation also met Opposition leader Adrian Delia who explained how the Opposition was insisting that Dr Muscat should resign immediately, and Nationalist MPs would not attend parliament for as long as he stayed in office.

He said Malta's current crisis stemmed from the fact that there was no effective separation of powers.

The Maltese, he insisted, were not corrupt, but the government was hostage to criminals.

Meeting between Muscat and MEPs was 'surreal' - Metsola

In comments at the end of the meeting with Dr Muscat, Maltese MEP Roberta Metsola, who is part of the delegation as the EPP’s representative, said it was surreal how the Prime Minister attempted to downplay the turmoil. Her colleagues, she said, were also surprised to note this. 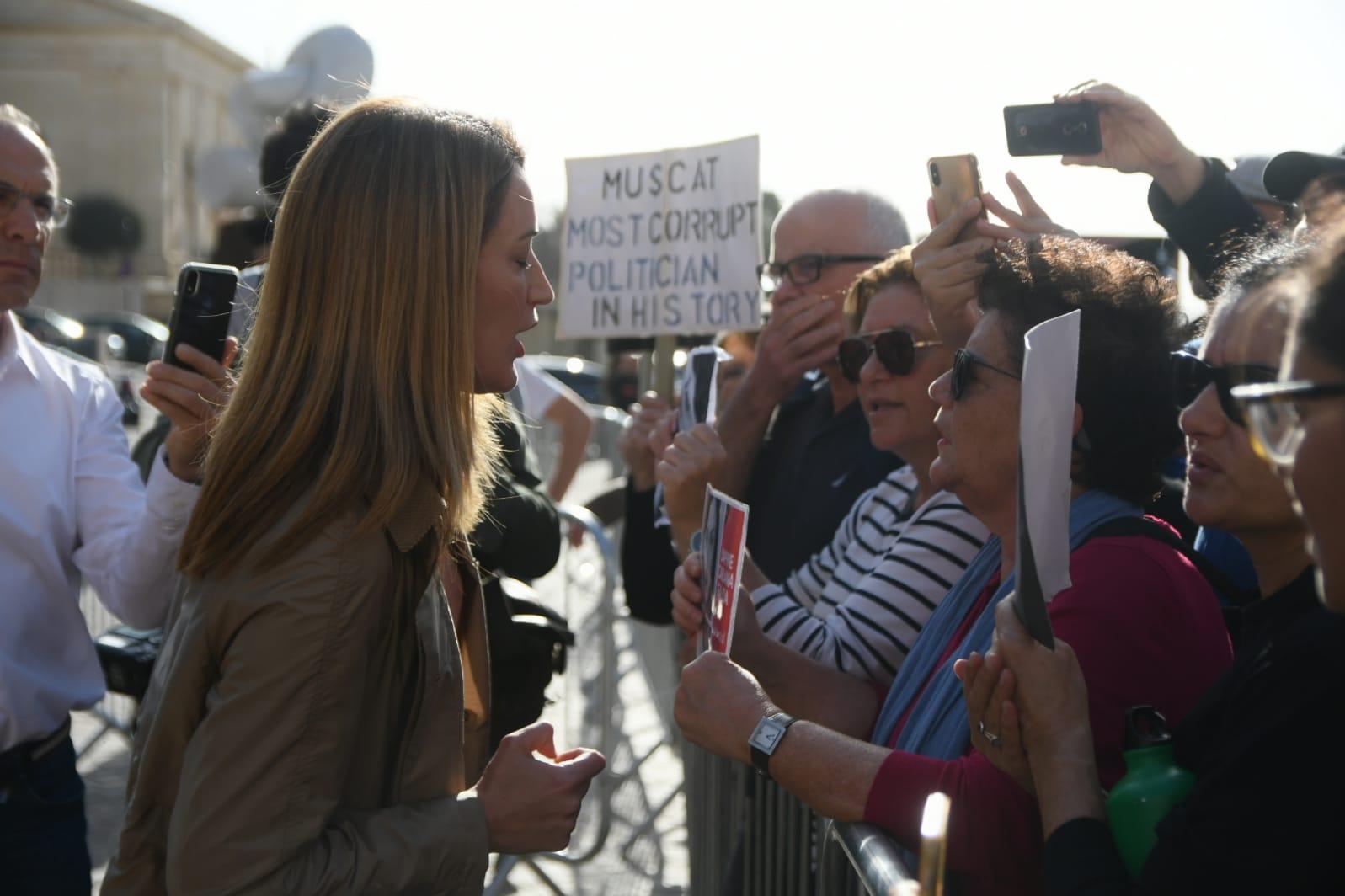 According to Dr Metsola, when she asked Dr Muscat whether he felt betrayed by his former chief of staff Keith Schembri, who was last week in arrested and questioned about the murder of journalist Daphne Caruana Galizia, the prime minister said he felt so.

“The prime minister gave me a one-word answer: yes. He then went on to try and say he made a number of misjudgements and so he has to carry political responsibility for that,” Dr Metsola said.

The MEPs are in Malta on a fact-finding mission after last week, the Prime Minister’s chief of staff Keith Schembri resigned and was hauled in for questioning by the police. He was later released without charges.

Roberta Metsola is asked about her question to Joseph Muscat about feeling 'betrayed'. Video: Ivan Martin

A few hours later, former Tourism Minister Konrad Mizzi resigned while his colleague Chris Cardona “suspended himself” following fallout from the murder investigation. Neither of the two has been charged.

On Saturday evening, businessman Yorgen Fenech was charged with complicity in the murder of the journalist. He pleaded not guilty and remains in police custody.