Yorgen Fenech was charged with complicity in the murder of journalist Daphne Caruana Galizia on Saturday night.

He pleaded not guilty to the charge and others, which include promoting or financing a criminal organisation and conspiracy to commit a crime. If found guilty, he will face up to a lifetime in prison.

Wearing a white shirt, grey suit and dark grey tie, Mr Fenech stared intently at the ground as his lawyer Gianluca Caruana Curran briefed him moments before the sitting began.

Ms Caruana Galizia was murdered in a car bomb explosion in October 2017. Three men stand accused of placing and detonating the bomb that killed her.

A middleman in the crime who is understood to have named Mr Fenech to the police, Melvin Theuma, has been promised immunity from prosecution in exchange for information about the case.

On Saturday evening, Ms Caruana Galizia's husband, sons, parents and sisters were all present as inspector Keith Arnaud read out the charges against Mr Fenech, who did not request bail and was taken from court to a cell at Corradino Correctional Facility.

Magistrate Audrey Demicoli ordered that Mr Fenech’s assets be seized. Defence lawyers asked which assets would be subject to that order, prompting deputy attorney general Philip Galea Farrugia to say that they did not even know what assets Mr Fenech had at this stage.

The accused’s passport, ID card and four credit cards found on him during his arrest were presented to the court.

Mr Fenech, a businessman and heir who until his arrest led the Tumas Group as its CEO, was arrested two weeks ago aboard his yacht at dawn, in an apparent attempt to flee the country. 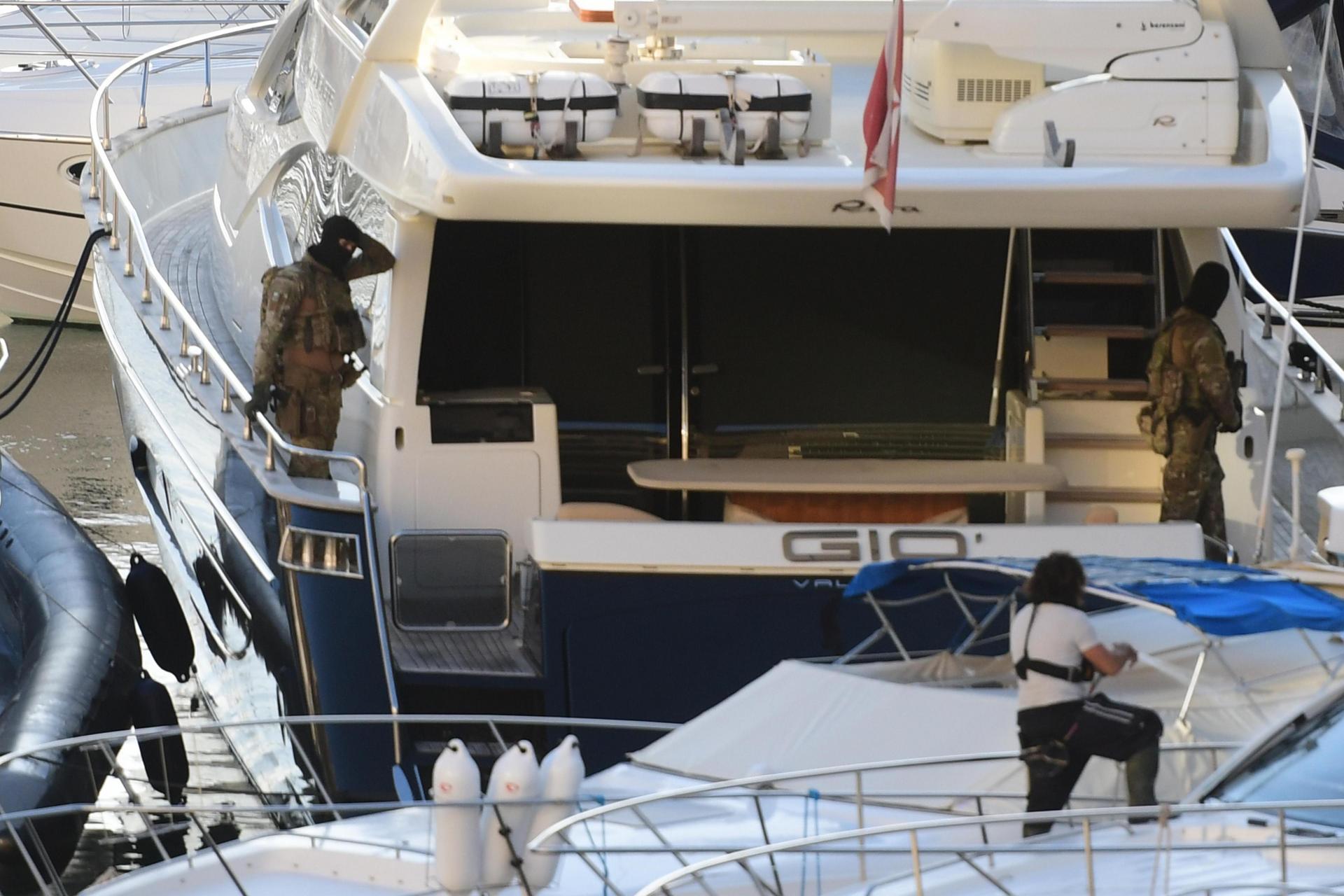 Yorgen Fenech's yacht, Gio, being searched at Portomaso marina on the morning of his arrest. Photo: Jonathan Borg

He was arrested, released and rearrested several times as police sought more time to interrogate him. A case he filed contesting the legality of those rearrests was turned down by a court earlier on Saturday.

Mr Fenech has unsuccessfully sought to obtain a presidential pardon, with two separate requests turned down by the Prime Minister and cabinet ministers respectively.

He alleges that Keith Schembri, Prime Minister Joseph Muscat’s chief of staff, was the real murder mastermind, and has written to President George Vella in an attempt to obtain a pardon directly from him instead.

Mr Fenech will now appear in court within the next 15 days for the start of the compilation of evidence against him.

Speaking after the court session was over, the Caruana Galizia family said that the next step was for Joseph Muscat to clear his desk.

“We now expect the Prime Minister to leave office, and parliament, with immediate effect, to allow a free and full investigation into his and Keith Schembri’s role in Daphne’s assassination," they said.

Activists will gather in Valletta at 4pm on Sunday to demand that the Prime Minister step down.

Lawyer Gianluca Caruana Curran and Marion Camilleri were legal counsel to the defence.

Download a PDF copy of Mr Fenech's charge sheet at the bottom of this article.

And that's a wrap

9.15pm Whispers from inside the halls of power suggest there won't be any Muscat announcement tonight.

To recap the evening's events:

Thank you for joining us. We will publish a summary of the Fenech arraignment up at the top of this article shortly.

Yorgen Fenech will be held at Corradino

9.09pm Our sources tell us that the multi-millionaire will be spending the night in a cell at Corradino Correctional Facility.

9.05pm The Caruana Galizia family has reacted to Mr Fenech being charged. They say it is now time for Muscat to make way.

“We now expect the Prime Minister to leave office, and parliament, with immediate effect to allow a free and full investigation into his and Keith Schembri’s role in Daphne’s assassination," they say.

One of Daphne Caruana Galiziai's sisters speaks to a journalist outside the law courts on Saturday evening.

8.59pm The first sitting of the compilation of evidence, according to law, must be held within 15 days of the arraignment.

That means Fenech will be back in court by December 15.

Fenech faces up to life in jail

8.56pm If Fenech is found guilty of being an accomplice to murder, he could face a life sentence in prison.

8.40pm Here's a more thorough description of what Yorgen Fenech stands accused of.

8.34pm With Fenech charged, the focus will now shift to Joseph Muscat and his political future.

There are rumours that Muscat recorded an address to the nation on Saturday, as part of his prepared exit. But Inewsmalta says the Prime Minister will not be quitting tonight. They're citing "sources close to the Prime Minister".

8.32pm People trickle out of the court building and make their way into the night.

Twenty-five months after she was killed, a person has now been charged with masterminding Daphne Caruana Galizia's assassination.

8.27pm Fenech was driven out from a back entrance, inside a police van.

What is Yorgen Fenech accused of?

8.23pm In a nutshell, Fenech stands accused of:

We're attaching a copy of his charge sheet as a PDF at the bottom of this article, for those who want to read the charges in greater detail.

8.22pm The hearing is over. Fenech is taken out of the court, to be taken into police custody.

8.19pm Defence lawyers do not make a request for bail. Instead, they ask which assets of Fenech's are being frozen and argue that many pre-date Ms Caruana Galizia's murder.

Philip Galea Farrugia from the AG's office says they do not even know what assets there are at this stage, so it is too early to specify.

Fenech's passport and ID card are presented to the court, along with four credit cards - two BOV Visa cards, an American Express card and a Mastercard.

8.18pm Dr Caruana Curran asks the inspector whether Keith Schembri formed part of the police investigation, whether Fenech provided him with information about Schembri.

"Is there a case against you, so you don't want to investigate?" he asks.

The court orders Inspector Arnaud not to reply to the questions

8.15pm Keith Arnaud says MrFenech was being monitored during the investigation and stopped when they saw him leaving on his yacht.

He was arrested and rearrested several times because of the complexity of the investigation, he says.

8.09pm Yorgen Fenech pleads not guilty. List of charges coming up in a minute.

Court is in session

8.07pm Magistrate Audrey Demicoli has entered court and the hearing can begin.

Charges are to be read out by inspector Keith Arnaud.

Yorgen Fenech is in court

8.04pm He's sitting in the dock, with his hands across his chest. He's staring resolutely at the ground.

Eight police officers accompanied him into the courtroom. Quite a difference from his Friday stroll through Valletta.

An aside - Sunday's protest is happening at 4pm, not 8pm as we mistakenly wrote.

Who are the lawyers?

8.02pm Lawyer Gianluca Caruana Curran is in court on behalf of Mr Fenech.

Philip Galea Farrugia and Nadia Attard are appearing for the attorney general's office.

Keith Arnaud and Kurt Zahra are the police inspectors in the case.

Jason Azzopardi and Therese Comodini Cachia are appearing on behalf of the Caruana Galizia family.

8pm Activists insist Muscat cannot sit it out until January, when Labour will elect a new leader to replace him.

"He has to leave IMMEDIATELY," write civil society group Repubblika. They also want police to search his office and home, and that of Keith Schembri.

A protest scheduled for Sunday at 4pm 8pm in Valletta will still go ahead, they tell people.

He is expected to announce he intends stepping down as Prime Minister after Yorgen Fenech has been formally charged in the Caruana Galizia case. It is not known whether he will make his intentions known on Saturday or later.

Husband and sons walk in

7.53pm Peter Caruana Galizia and his three sons have joined the court audience.

7.44pm As part of their job, magistrates work according to a daily roster to hear arraignments.

Mr Fenech's arraignment will be heard by magistrate Audrey Demicoli, who happened to be the duty magistrate working this Saturday.

What is an arraignment?

7.40pm At the arraignment stage, a suspect is formally charged with a crime - or multiple crimes - and must tell the court whether they plead guilty or not guilty to the charges.

The magistrate must then set a date to start hearing the compilation of evidence, when prosecutors can present whatever proof they have against the suspect.

Defence lawyers can also request bail for their client during the arraignment. A magistrate will hear arguments both for and against allowing the suspect out, and then decides accordingly.

7.35pm The court building is open and people have started filing in. Ms Caruana Galizia's parents and sisters are among those spotted.

7.29pm  Fenech has had two requests for a presidential pardon rejected. Muscat turned down the first one himself, with the second being rejected by his ministers.

That decision was taken during a stormy six-hour Cabinet meeting held on Thursday night.

Journalists at the ready

7.22pm Journalists from across the world are huddled outside the law courts in Valletta, waiting for it to open.

Fenech is expected to be arraigned at 8pm. 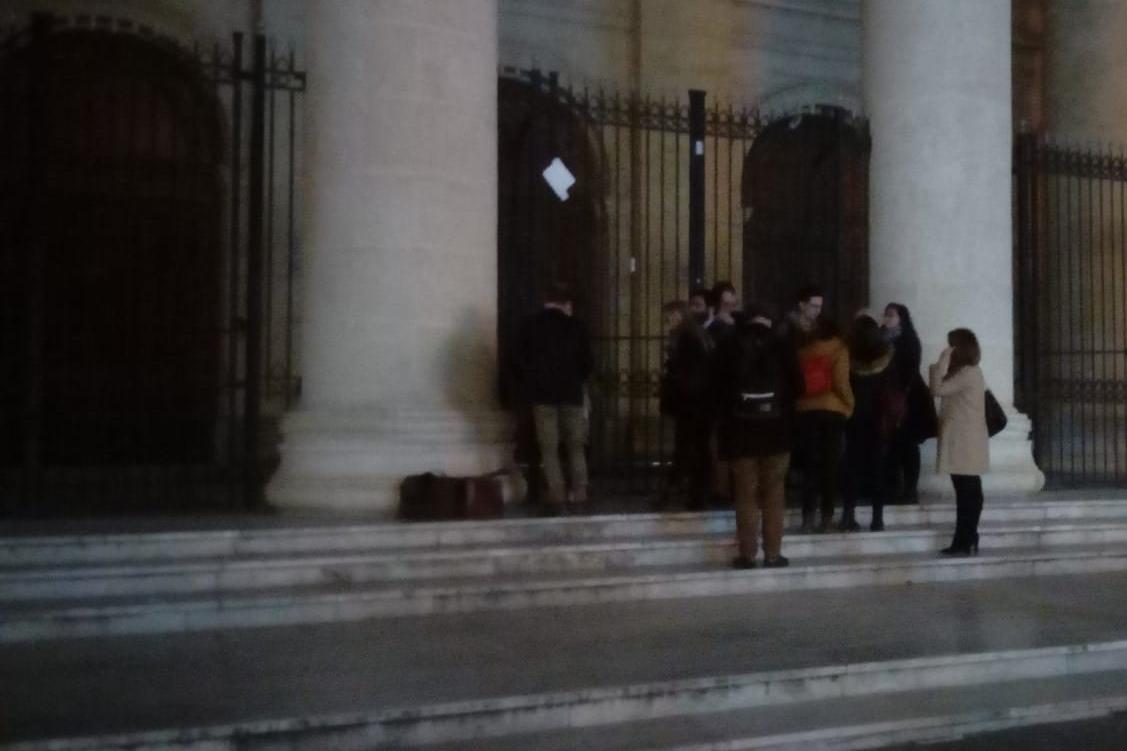 Reporters wait outside the law courts building in Valletta.

7.19pm  Fenech's lawyers had tried to argue that his arrests - there have been many of them - were illegal, because police were not allowing enough time between releasing and rearresting him.

Earlier on Saturday, the court turned that plea down.