• Witness had confirmed suspicion of inside job

OPM minister Carmelo Abela is facing a fresh police investigation into claims he was one of the inside men who helped facilitate a botched heist on HSBC’s Qormi headquarters in June 2010.

Abela was notified last week by Judge Giovanni Grixti about the police’s request to gain access to testimony given by the minister behind closed doors during the compilation of evidence against two men charged with carrying out the violent heist.

When confronted about this testimony last week by Times of Malta, the minister said he did not remember ever having taken to the witness stand about the heist.

The police made it clear in their May 5 court application to the judge that a fresh investigation had been opened in light of the allegations against Abela.

It has emerged that Abela was one of a small group of people within the bank who had access to security equipment that generates key cards suspected to have been used by the robbers to gain access to sensitive areas within the bank’s cash centre.

At the time, Abela was a senior insurance and statistics officer within the security department, where the equipment was held.

In a move described as “unusual” and “unnecessary” by several legal experts approached by Times of Malta, Judge Grixti decided to notify Abela about the police’s request for his testimony and the fact that he is being investigated, even though the minister was not a party to the original case and had no reason to be told about the police’s investigation. 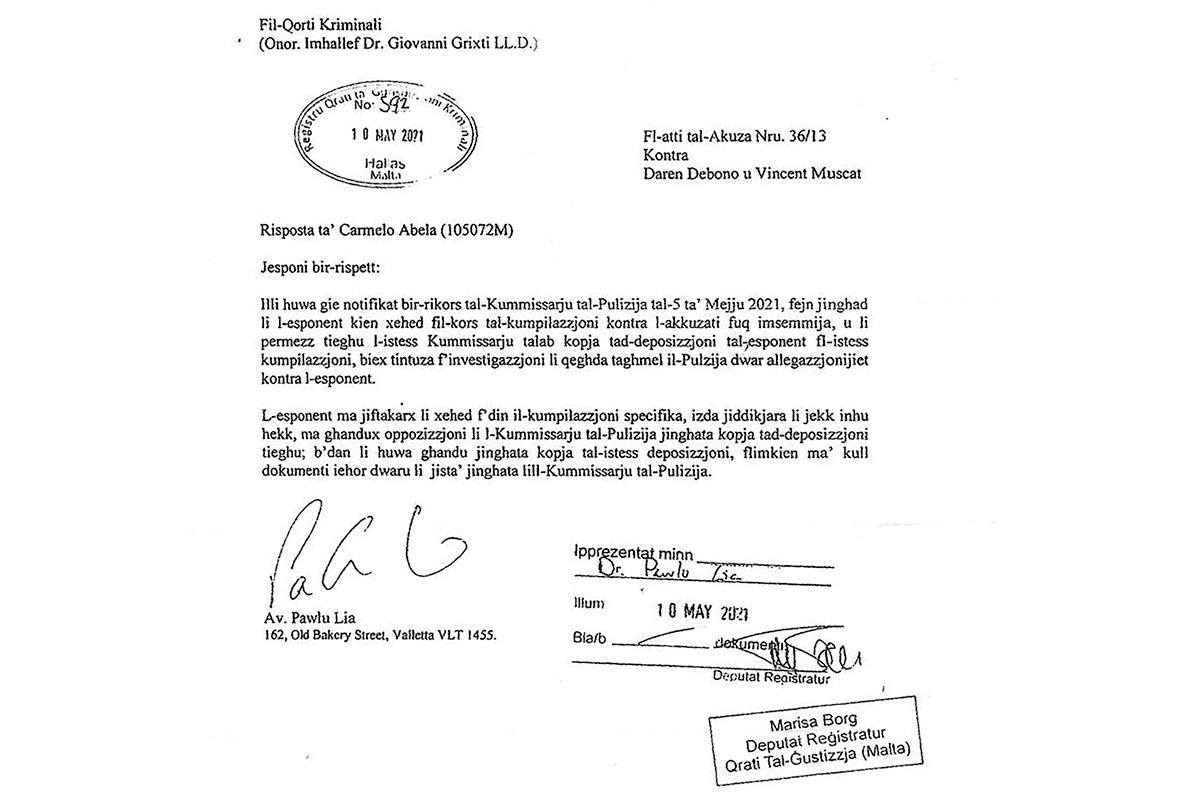 The response to the police’s request filed by Carmelo Abela’s lawyer Pawlu Lia.

Legal filings by Abela’s lawyer Pawlu Lia on May 10 show the minister told the judge he had no problem with the police commissioner being granted access to his testimony, so long as any material passed on to the police is also given to him.

Lia also reiterated the minister’s claim that he does not remember ever testifying in the HSBC case.

Both Vincent Muscat, who is facing a trial over the HSBC heist, and Daphne Caruana Galizia murder suspect Alfred Degiorgio, are understood to have knowledge about a role played by an unnamed minister in supplying the key cards used during the heist.

Opposition MP Jason Azzopardi has indicated that the minister in question is Abela, a claim Abela has vehemently denied and subsequently sued over.

Times of Malta has independently confirmed the reference by Muscat and Degiorgio to a minister being involved in a major crime is indeed a reference to the HSBC heist and Abela.

Separate attempts by Muscat and Degiorgio for a presidential pardon in exchange for revealing information about the heist have been rejected by Abela’s colleagues in cabinet. 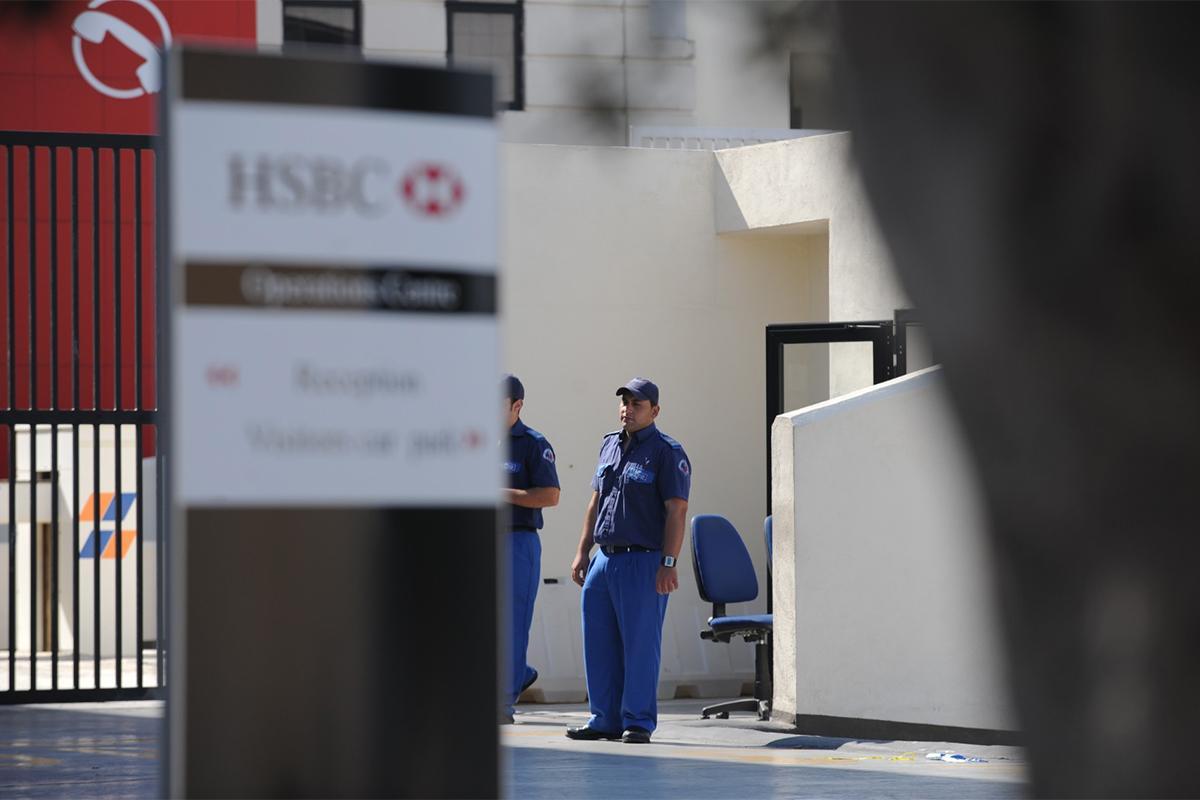 In a bid to justify his request for a pardon on the heist and a raft of other crimes, Muscat told police last year that the robbers were provided with three colour-coded key cards by an unnamed accomplice prior to the heist.

Abela confirmed to Times of Malta last week that he had access to security equipment, known as a Cotag machine, and could make use of it to cover for colleagues when they were out on leave, although it wasn’t his primary responsibility.

“We were a small department, we all helped each other,” Abela said.

Further testimony from the HSBC case reviewed by Times of Malta confirms the use of internal security cards during the heist.

The cards allowed the robbers to reach the bank’s control room, through which they could have then gained access to the bank’s vaults where the cash was stored.

One employee, a manager who worked within HSBC’s security department, testified that “somehow”, some of these cards were either “copied or cloned”.

Each bank employee was assigned a card with a unique number. If a card was lost, it was cancelled and a new card with the same number issued.

However, the witness said the machine that was used to issue new cards, which was kept in the security department, did not automatically generate a record when a new card had been programmed in.

Instead, the small group of employees within the department were meant to keep a written log every time the machine was used to generate a new card.

The same witness also walked police through the bank’s own internal investigations after the June 2010 heist attempt. 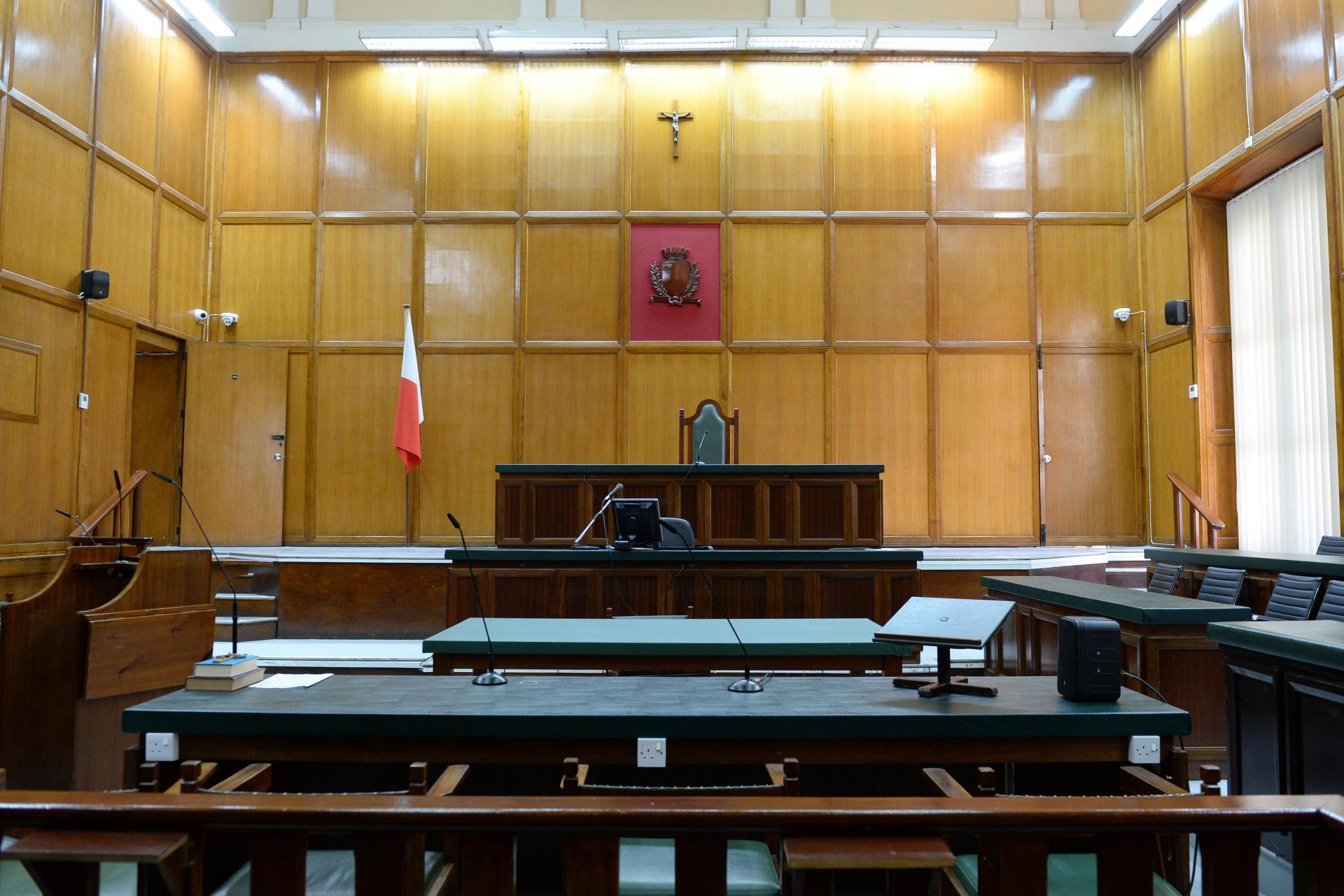 “Naturally, in the investigation that took place, it was obvious that the people who entered the bank did so using a card.”

The witness explained how analysis of CCTV footage and what was described as a “transaction report” confirmed that internal security cards had been used to open doors at the precise moment the armed robbers entered the bank.

The failed heist ended in a violent shootout with police outside the bank, after the would-be robbers abandoned the plan when they were alerted to the presence of a patrol car that had arrived outside the Qormi headquarters.

In 2017, former police inspector-turned-lawyer David Gatt was cleared of involvement in a string of armed robberies, including the failed HSBC heist.

His former associate, Chris Cardona, who until last year was Labour’s deputy leader, has also been linked to the heist in recent months. He denies any involvement.

Vincent Muscat and Darren Debono are still awaiting trial over their alleged involvement in the heist. Both men deny the charges.

Will Carmelo Abela step down?

Given the gravity of the allegations, do you not feel it best to step down until your name is cleared, similar to the approach taken by your colleague Rosianne Cutajar over a far lesser allegation that did not involve a police investigation?

Were you aware of the investigation prior to being notified by Judge Giovanni Grixti?

In the past weeks, not only have I strongly denied these false allegations which I believe are the result of a conspiracy between PN Member of Parliament Jason Azzopardi and criminals who want to get away with murder, but I have also instituted libel proceedings.

I believe that the police are obliged to investigate allegations, which are being made over 10 years after the mentioned case, at a moment when criminals started lobbying for a presidential pardon. However, I also expect the politician making these allegations to assume responsibility and resign, evident that he has been pushing fabricated lies.

It stands to reason that I welcome any type of investigation into the allegations made by Azzopardi and his criminal friends. Therefore, as you rightly pointed out in reference to my reply to the police’s request, I have absolutely no difficulty with the police’s access to my deposition.