Nurses have been instructed not to care for coronavirus patients unless they are provided with protective gear covering their entire head.

Health authorities in Malta are currently following World Health Organisation and European Centre for Disease Prevention and Control protocols, which require care workers to wear a gown, mask, visor and gloves when caring for COVID-19 patients.

However, the Malta Union of Midwives and Nurses said that these are minimum standards and wants greater protection, in the form of 360-degree coveralls, for its members.

The union argued that while standard personal protection equipment would suffice for patients treated in rooms with 'negative pressure', such as the intensive treatment unit and infectious diseases unit, greater protection was needed for patients held elsewhere.

MUMN president Paul Pace acknowledged that it might be difficult to import 360 degrees coveralls, as some countries are hoarding protective gear in anticipation of a COVID-19 outbreak.

Later on Monday, medical professor Michael Borg said there was no cause for concern.

"It makes no difference whether you are in this room or that one".

Negative pressure environments were used in areas where there were aerosol-generating procedures, he said.

But MUMN head Pace said that even if nurses had the necessary the protective gear, they were still lacking training.

"It's like giving a person a rifle, showing him how to insert a bullet and just sending him to war."

Pace drew parallels between the situation in the health sector with a building collapse tragedy that cost a woman her life last week.

“We should not have another Miriam Pace, but this time in the health sector, just because they weren't given adequate protective gear," he said at a press conference.

Pace criticised Prime Minister Robert Abela for playing down COVID-19 fears by reassuring people that “it is not the plague”.

"I tell him one thing: it is as contagious as the plague and it will be more difficult to treat than the plague. We are a small over-populated country with limited resources," Pace added. 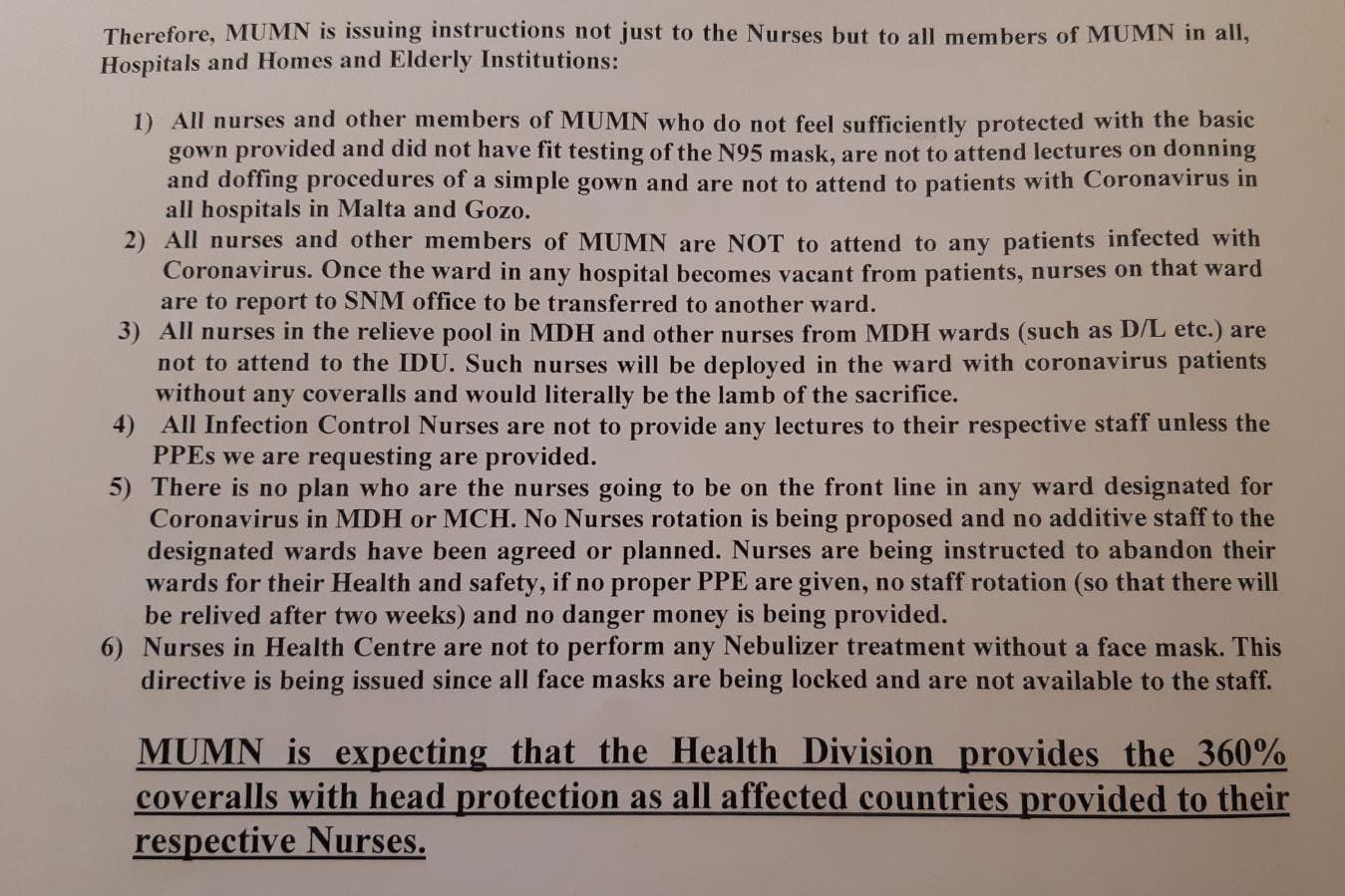 The MUMN's instructions to its members.

No flights to Milan

Malta has three confirmed cases of COVID-19 – a 12-year-old girl and her two parents. Health authorities have said that they are prepared for an increase in cases and have emphasised that there is no need to panic.

Air Malta decided on Sunday to halt its flights to and from Linate airport in Milan, after the Italian government quarantined the Lombardy region.

Doctors have welcomed that decision but said that all other flights linking Malta and northern Italy should be stopped and passengers on any such flights over the past two weeks should be tracked down and required to undergo quarantine.

The MUMN was not the only union to issue its members with coronavirus-related instructions on Monday. In a separate statement, the Malta Union of Teachers said that it did not want its members to attend any activities featuring groups larger than 30 people.

Teachers have already been following union directives to not correct any homework of sick children or to attend indoor gatherings such as assemblies.