A total of 337 Ukrainian citizens have received temporary protection in Malta, according to the home affairs ministry.

But SOS Malta maintains the number of arrivals from the war-torn country could run into hundreds more and the island is not prepared for them.

Until last week, the International Protection Agency had received 338 requests for temporary protection from displaced people, with the vast majority being females and minors, the ministry confirmed.

Only 24 of these applicants were male – Ukrainian men must remain behind in the eventuality that they may need to take up arms and join the fight against the Russian invasion.

The Temporary Protection Directive (2001/55/EC) applies to Ukrainian nationals who fled their country after February 24, when the war broke out, the ministry specified.

The duration of this protection is for one year and may be renewed every six months for a maximum of 12. Ukrainians do not require a visa to access the Schengen Area.

The directive provides for access to services such as healthcare and education for children. It offers Ukrainians the opportunity to work and the possibility to apply for social benefits. 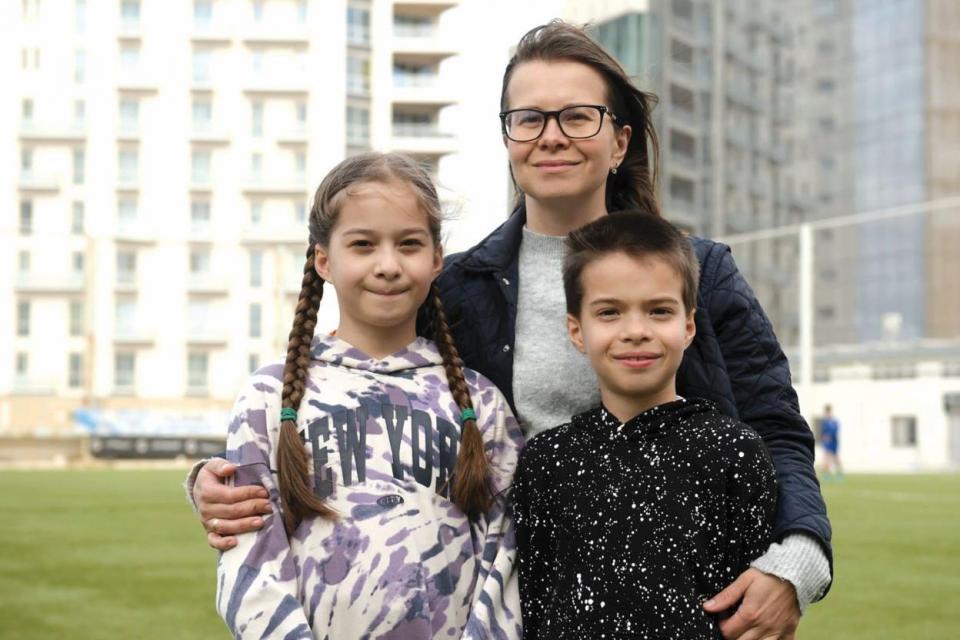 One of the displaced Ukrainian families: Anastasiia Diadiuk and her two children Mariia and Mykhailo, who have been offered an apartment by a Maltese family.

Sources have said not all Ukrainians would seek temporary protection once here and that it is not clear exactly how many have arrived in Malta since the war broke out as they fly in from various countries.

“Seeking temporary protection is one thing but the number of arrivals is quite another,” said Claudia Taylor-East, the CEO of SOS Malta.

SOS stands for Solidarity Overseas Service and the NGO has locally been at the forefront of giving support and raising funds for Ukrainian refugees. It has been providing services mainly at the Romanian border with Ukraine.

Asked to comment on the figures of Ukrainian refugees in Malta, Taylor-East claimed hundreds more would have arrived.

“That is the question,” she said, adding that the number of those seeking protection will grow as refugees may take time to apply.

SOS Malta is one of 12 organisations on the Malta Refugee Council that recently flagged the lack of certainty on procedures for Ukrainians fleeing the war and arriving here.

In a letter to Prime Minister Robert Abela, they pressed him to urgently establish a Humanitarian Coordination Committee.

The absence of clarity on related documentation and services was affecting the organisations’ ability to provide their own services, they told the prime minister.

Taylor-East at the time highlighted the “misinformation” around the Ukraine crisis, saying there were “lots of questions and no answers”.

The country was not prepared for this and is still not prepared, she reiterated yesterday.

While many generous people were ready to offer a lot, key coordination and clear protocols were lacking, she continued.

Taylor-East insisted the host families had no guidelines and problems were already arising.

“We are talking about housing strangers with a different culture while the host families have undergone no vetting to check the accommodation as is normally the case.

“They do not know where they stand and what their legal position, responsibilities and obligations are,” Taylor-East said, adding that “they are finding themselves in a pickle and do not know who to turn to”.

It was not just a question of people offering their homes to host Ukrainians but the costs of utilities and food also needed to be covered, the CEO said.

They have offered support without knowing what they are going in for- Claudia Taylor-East, SOS Malta

Social benefits would not meet the cost of living, she continued, while NGOs and the Ukrainian community were also limited in terms of the support they could offer.

From the psychosocial point of view, SOS Malta is offering online support through an Ukrainian psychologist.

But Taylor-East questioned where the EU funding to support displaced Ukrainians in Europe was going and whether it had reached Malta.

As the war moves into its third month, she questioned whether people who had given up their summer residences, for example, would be wanting them back if the process turned out to be lengthy.

“Can they just chuck them out,” she asked, stressing that “they have offered support without knowing what they are going in for”.

Since the story of Anastasiia Diadiuk, who has been put up in an inherited Sliema apartment belonging to a Maltese family, appeared in Times of Malta, people have come forward to ask how they could offer their properties to displaced Ukrainians as they were unsure how to go about it.

The man who is hosting Diadiuk, her sister-in-law and their four children in the apartment he owns with his siblings encouraged others to put empty properties to good use.

Diadiuk, a mother-of-two, is a university professor and practising lawyer who is actively seeking employment in her field.

She was offered a meeting with a law firm for a potential placement after the story was published this week.

Collection of items for Ukrainian people

Five parishes will be collecting essential items for the people of Ukraine on Saturday, the Curia said yesterday.

The items will be collected in the parish churches of Mqabba, Naxxar, Pembroke, Qawra and Marsascala between 1 and 7pm.

They will be distributed by Caritas Ukraine.