The Planning Authority has approved plans to turn a tiny dilapidated Qala room in land in an Outside Development Zone land into a sprawling villa.

In a vote on Thursday, the PA overturned a recommendation not to approve the controversial development.

The application hit the headlines last July when Times of Malta revealed that Gozitan construction magnate Joseph Portelli wanted to turn the ruins of a 31-square-metre rural room in the pristine countryside surrounding Qala – in an Outside Development Zone – into a large villa and outside space covering 4,000 square metres of agricultural land.

According to policies established in 2014 by the Planning Authority, the starting point for such an application, in an ODZ, is proof of past residence: the applicant would need to provide evidence that the area to be developed was once used as a home.

To try to satisfy this crucial requisite, the applicant provided the authority with the death certificate of an 84-year-old farmer, Grazia Mifsud, who was found dead in the area in 1921. The authority requested, however, that a notarial declaration regarding habitation be submitted.

Times of Malta revealed how Ms Mifsud lived in another house in central Qala. The document is from Qala’s Status Animarum – the parish archives – which has records of the village’s residents during that period. 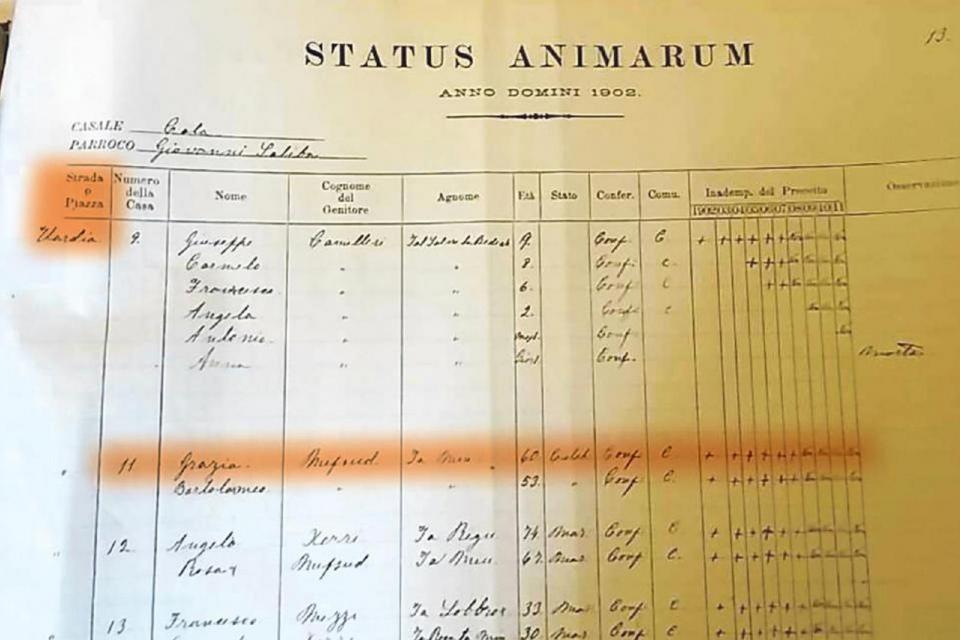 The archive showing Ms Muscat registered at a different address.

Despite the objections of the Environment and Resources Authority, the Superintendence of Cultural Heritage, the Qala local council and NGOs declaring that the application was a non-starter, the commission defended the application.

The chair criticised the directorate for not considering the death certificate as proof of residence.

Environment Minister Jose Herrera was also criticial about the way the application was handled.

Times of Malta had also revealed a potential conflict of interest: one of the developers behind the project, Joseph Portelli, was using Ms Ellul’s husband as his architect in other development projects.

Ms Ellul has rejected any suggestion of conflict of interest, stating that she did not know the identity of her husband’s clients.

She was one of those who voted in favour of the development on Thursday.

Qala mayor Paul Buttigieg was livid at the decision. Almost with tears in his eyes he vowed to continue fighting this application as he had done with the application for a massive development at Ħondoq Bay, also in Qala.

In his submissions during the hearing, he said this was one of the most clear-cut decisions the PA board needed to take as the pre-requisite that the structure had been a residential dwelling in 1978 had not been met.

The applicant only submitted a death certificate showing that a woman had supposedly died there in 1921. There was no address in the certificate and it could have been referring to another room 100 metres away.

On his way out of the PA boardroom, he sarcastically told board members prosit (well done).

In reaction, Din l-Art Ħelwa architect Tara Cassar slammed the "unacceptable" destruction of rural areas through "unsubstantiated" permits that go against the recommendation of all those consulted on the matter, including the Superintendence of Cultural Heritage and ERA.

The Environment and Resources Authority denounced the PA’s decision to give the project the green light. ERA’s chairman, Victor Axiaq, was one of the four who voted against the development.

ERA had been one of the consultees in the various stages of the application. It had said it considered any proposed development and other physical interventions at the site unacceptable in principle.

The site of the proposed development was located in a very sensitive rural location, directly within an Area of High Landscape Sensitivity atop a predominantly undisturbed rural coast.

The existing stand-alone building appeared to be an old traditional rural structure characterised by traditional features. This structure was an integral part of the character of the surrounding rural landscape.

“Permitting such a proposal creates a precedent for further built-up structures within this sensitive area, which cumulatively would result in the uptake of land in the countryside for unacceptable urban uses, with consequential additional impacts on the rural landscape and the visual amenity of the area,” it said in a statement expressing disappointment with the decision.

“ERA remains of the opinion that the proposed development will result in over-development of the site. It will also result in land parcelling and fragmentation of land, contributing to significant take-up of extensive tract of undeveloped rural land within the countryside.

"Other impacts include the introduction of materials that are incompatible with the rural context and scenic qualities of the area. The introduction of light and miscellaneous disturbance on-site and in the surrounding area will contribute to the ecological degradation of the wider area,” it said.