The Labour Party would win by a majority of 55.1% if an election were held tomorrow, with the Nationalist Party obtaining 43.5%, a survey commissioned by Times of Malta has found.

This could translate into a gap of 37,000 votes between the two parties, however, the final figure will depend on several factors, not least of which is voter turnout.

Just 1.4% say they will vote for the smaller parties, according to survey results by market research firm Esprimi.

However, with just one week to go until voting day, the gap could change.

Sources within the two main political parties predict voter turnout could be lower than the above 90% turnout normally registered in general elections.

While the percentage difference between the parties is expected to remain as predicted, the rate of valid votes cast will have an impact on the gap between Labour and PN in terms of actual ballots cast.

Times of Malta’s commissioned number crunchers said that there are other factors which are still unknown.

This will be the first general election in which 16- and 17-year-olds can vote, and it was impossible to predict what impact the COVID-19 situation could have when voting booths open on March 26.

Fieldwork for the survey ran between March 5 and 15, at the end of which the government had already started sending its controversial cheques to each household. The margin of error is 4%.

The survey is based on data collected from 600 respondents aged 16 and over.

All interviews were carried out over the phone using random digital dialling and included a mix of landline and mobile numbers.

Times of Malta last published a political survey on February 27, one week into the election campaign. That had predicted the PL would win by 44,500 votes.

The gap has been shrinking over the past few months.

In November, a survey predicted Labour would win by a larger gap of around 47,000 votes.

The first Esprimi political survey carried out in July 2021 had found Labour ahead by more than 50,000 votes.

Who should be prime minister?

Robert Abela enjoys the largest share of support, with 57.8% saying they prefer him as prime minister over his main political rival.

Bernard Grech is the preferred candidate of a significantly smaller 21.2% of respondents.

Thirteen per cent said they prefer neither candidate while a further 8.9% preferred not to comment.

This means more than a fifth of respondents did not pick from the two options available.

A question of age

When respondents’ age is factored in, the picture changes somewhat.

Grech’s support is strongest among those aged 65 and over, with 26.1% saying they back him.

This is followed by the 55-64 age group, with 25.2% saying he is their preferred candidate for prime minister.

Survey based on data collected from 600 respondents

Conversely, Abela polls strongest with the youngest age category. Some 60.2% of those aged 16-24 back the PL leader.

Support for the two leaders also changes depending on the location of respondents.

Gozo is still open for discussion, with more than a third of respondents (35.7%) there not picking either of the two candidates.

Abela’s support base is overwhelming in the so-called southern harbour region, with 73.2% here supporting his bid to be prime minister.

Grech’s support is lowest in the so-called southeast region, with just 18.1% backing him here compared to 61.9% backing Abela.

Abela is a man’s man, but women are more split

Abela is the preferred prime minister of 60.8% of male survey respondents.

A further 20% did not express themselves, down from 24% last survey.

The survey found that 55% of female voters say they prefer Abela, up from 49% last survey.

Meanwhile, 23% prefer Grech and nearly the same amount (22%) is either undecided or preferred not to give a response, down from 31% last survey.

Past voting and future intentions

The survey also looks at how people will be voting on March 26, based on how they voted in 2017 when Joseph Muscat ran against Simon Busuttil.

Respondents were asked to rate their satisfaction with the two leaders between one and 10. 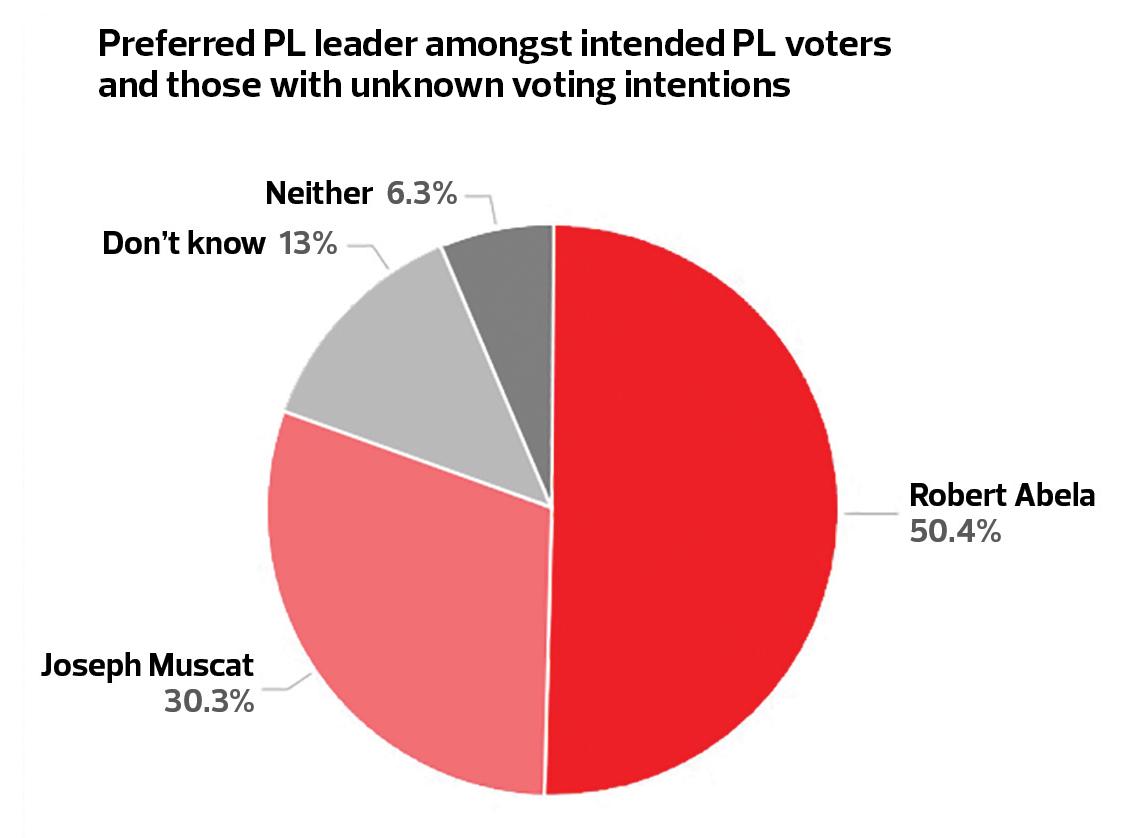 The survey found historic Labour voters are happier with their current leader than those who voted PN are with theirs.

Historic PN voters are now far less likely to say they prefer Abela than they did last month. 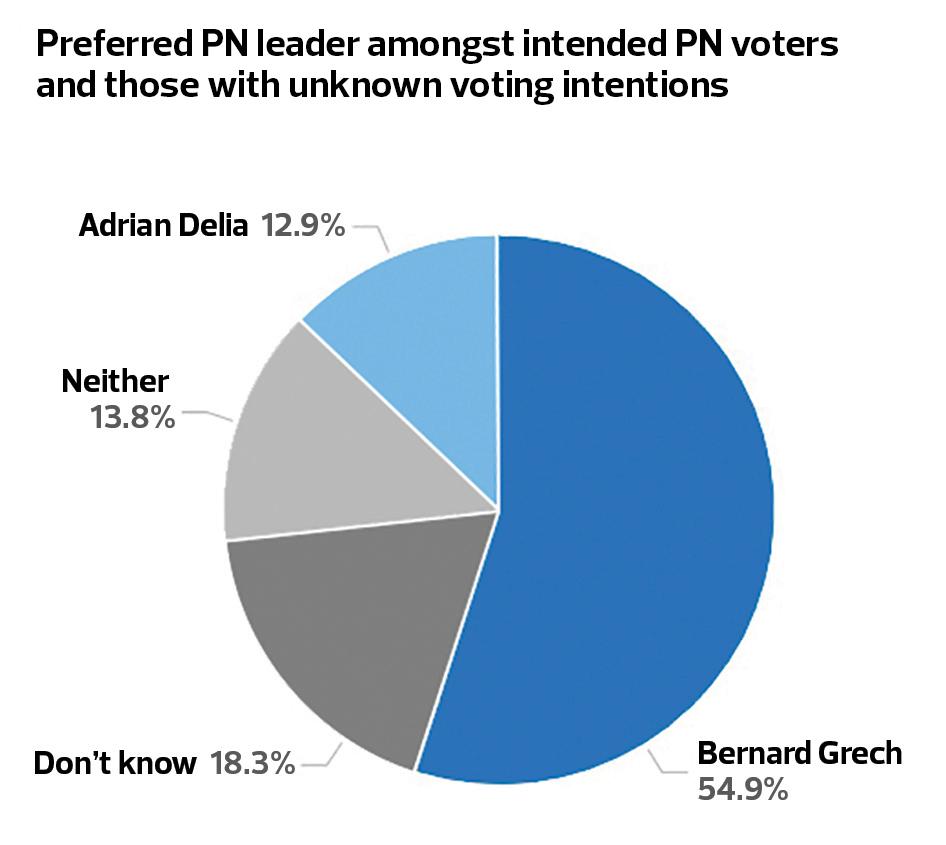 Some 15.6% of traditional PN voters say they prefer none of the two, down from 19% in February.

Those who voted Labour in 2017 remained far more party loyal, with nearly nine in 10 (88.5%) saying they want Abela to lead the country, up from 83% in February.

Is it time for a change in government?

Some 60% of respondents say it is not time to kick the Labour Party out of office, up from 55% last month.

Meanwhile, 31% think they need to be shown the door and told to leave, down slightly from 33% last survey.

While these are the global figures, the picture does not change too drastically when different demographics are factored in.

Across all age groups, at least 50% of respondents say they want to keep Labour in office.

Those in the oldest age group (62.6%) are most likely to want to stick with Labour.

Those aged 45 to 54 are most likely to think it is time for a Nationalist administration, with 34% ticking this option. However, even in this age category, 57.6% still back Labour.

On the other hand, there is a concentration of people who want Labour out of office, but it is not in Malta.

Some 43% of Gozitans think it is time to change the party in government, compared to 39% who want to stick with Labour.

In the northern region, 41% want a change, but here 55% want Labour to remain in power.

Again, support for the Labour Party in office is strongest in the party’s traditional heartland of the south harbour region.

Here, 70% say they do not want a change in government and just 24% want a fresh start with a PN administration.