Elderly people in line to receive a COVID-19 vaccine were left confused and frustrated on Friday as tensions soared at health centres.

Healthcare workers are currently vaccinating people aged 85 and over who live within the community, with those eligible for a vaccine receiving appointments in the post.

But that appointment system has run into logistical problems, with complaints about delays, no-shows and poor organisation at health centres.

Frustration was especially vociferous at Floriana and Gżira health centres, with dozens of senior citizens and their relatives saying the system to get the long-awaited jab was disorganised, with many having no choice but to wait outdoors, often with no social distancing measures.

At one point in Floriana, some of those waiting for their turn got into a tense argument and a chair was seen being hurled across, according to witnesses. The police showed up to calm the situation and left shortly afterwards.

“It’s shameful our elderly are being forced to wait outside in the cold over an hour,” one woman told Times of Malta. 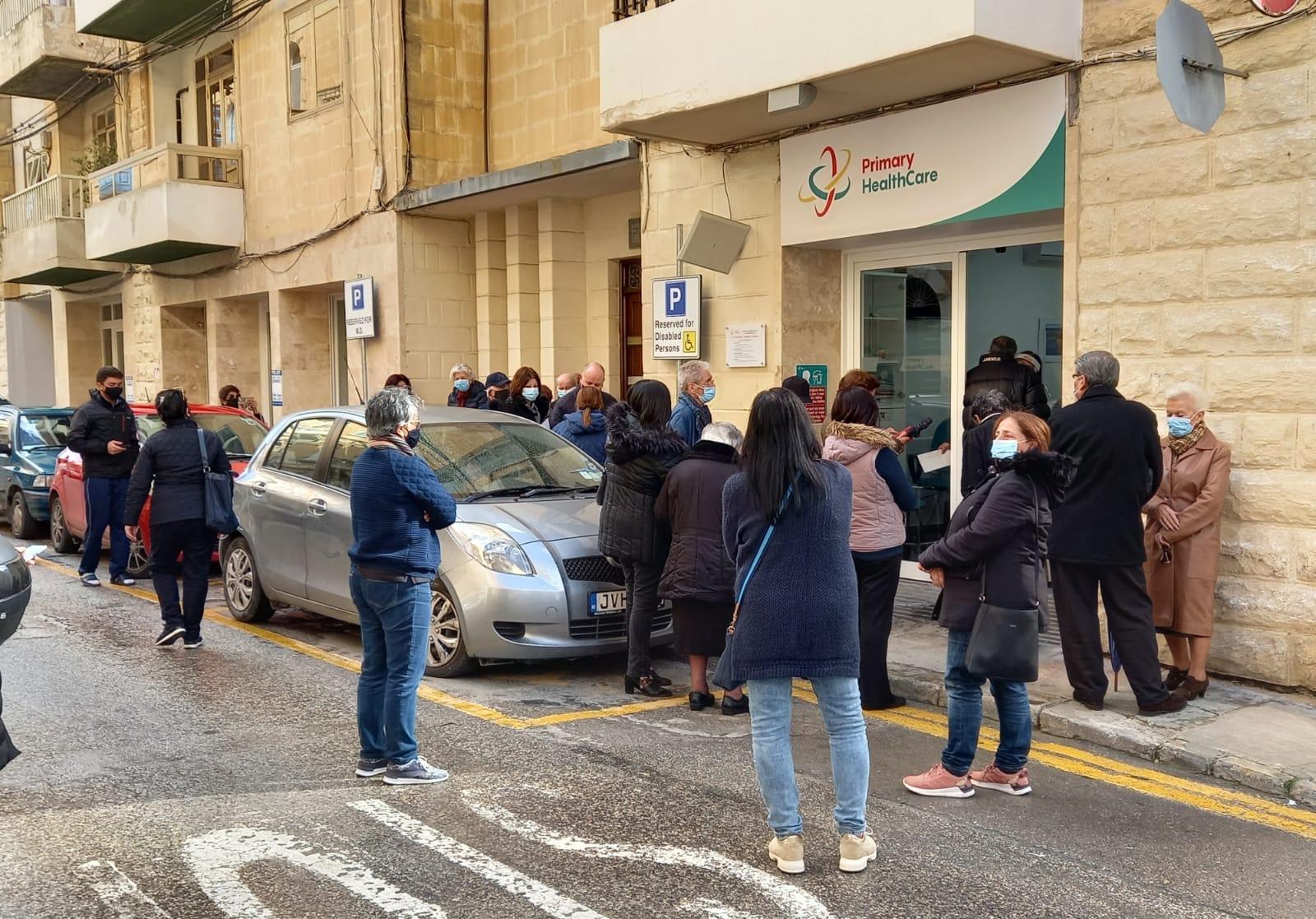 The situation in Gżira.

Carmen Bonello, 90, said she been waiting an hour for her appointment.

“It’s very disorganised, it’s cold and people my age have nowhere to sit.”

The problem in Gżira appears to have been exacerbated since the health centre was temporarily relocated to operate from smaller premises.

Those waiting in the queue said despite being given an appointment, they still had to first collect a ticket and wait in line.

In Floriana there is no ticketing system, with those called for an appointment waiting outdoors.

A woman noted the irony of her elderly father, who had remained practically homebound since the COVID-19 pandemic began, being forced to stand in a crowd and expose himself to risk to receive the vaccine.

Angie Felici, whose mother is wheelchair-bound, said her mother would have had to wait longer if she wished to have the vaccine taken at home.

"My mother is 90 and wheelchair bound, and instead of waiting longer we decided it would be best for her to get vaccinated now."

One source within the healthcare system alleged that a number of vaccines had to be thrown away because people were fed up of waiting. Times of Malta was unable to verify that claim.

The situation appears to be proceeding smoother in Birkirkara and Mosta health centres, with no particular incidents reported. 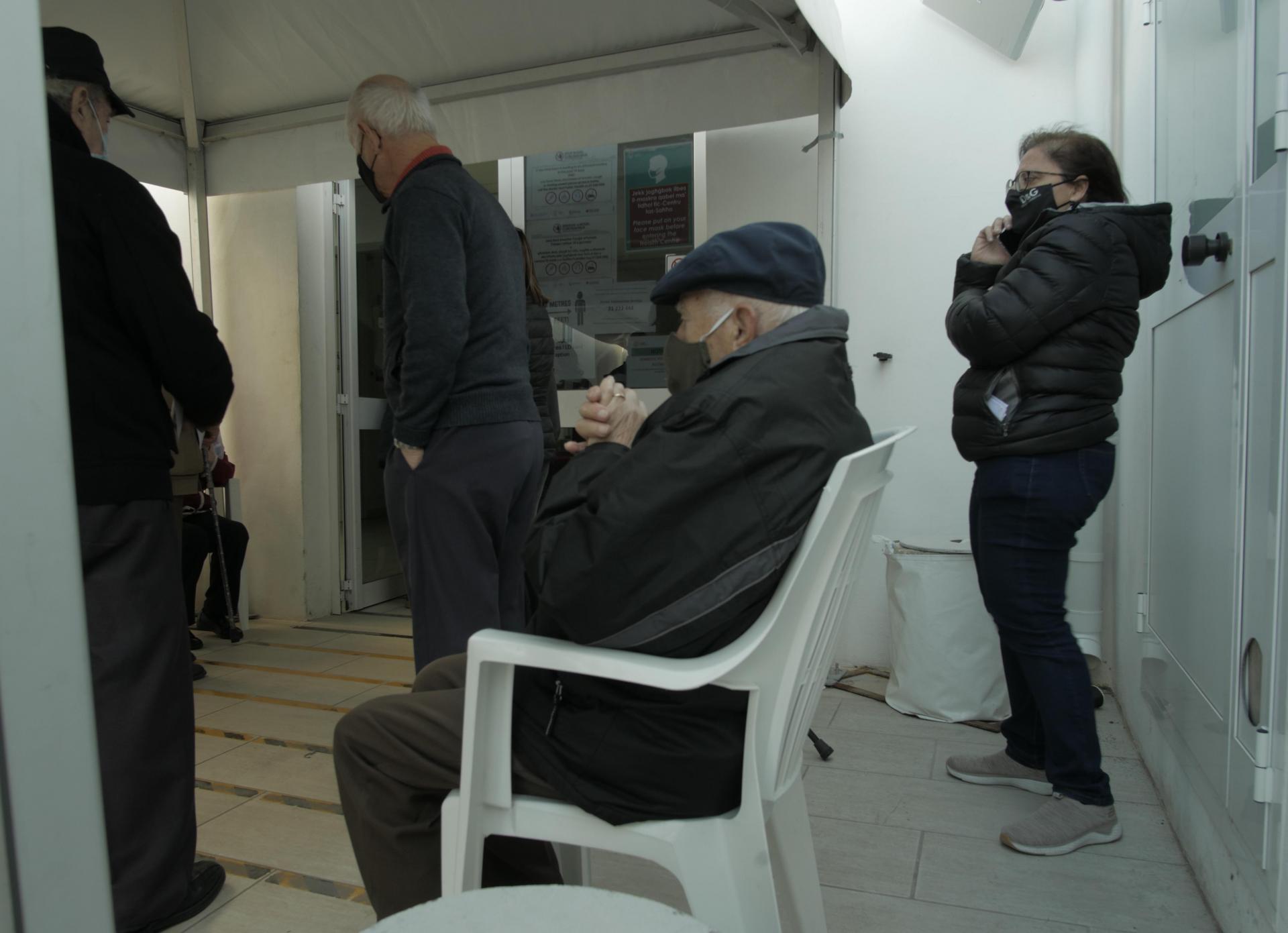 Speaking on Friday, Health Superintendent Charmaine Gauci acknowledged overcrowding at some vaccine stations but attributed it to people not sticking to appointment times and showing up early.

"I was at health centres this week and saw people who showed up two hours early," she said, as she urged people to show up for vaccination at their allotted time.

Around 9,500 vaccines have been administered so far.

The majority of vaccines currently being administered are ones manufactured by Pfizer/BionNtech, with a smaller number of vaccines by made by Moderna also available.

Pfizer's vaccine must be stored at extremely cold temperatures reaching as low as -70° Celsius. It can last for up to five days in standard refrigerated conditions once thawed and up to two hours when stored at room temperatures.