A Ukrainian mother and daughter, who fled war to seek refuge in Malta with nothing but the clothes on their back, ended up in quarantine in a hotel where they were told to pay for their food and drinks for two weeks.

“They arrived from a long journey, exhausted and famished and were locked in a room without food,” said Davina Preca, a Maltese woman who has signed up to host the pair in her home.

Preca and her friends had to rally around to make sure the woman and her 13-year-old daughter were provided with a hot meal when they arrived on Wednesday.

The Superintendent of Public Health eventually allowed the pair to move to the free full-board accommodation. The move will take place on Friday (today).

However, Preca is now worried about other Ukrainians being put up in a COVID-19 hotel when alternatives, offering everything for free to them, are available.

After Russia invaded Ukraine last month Preca signed up to the website Shelter 4 UA to offer to host a Ukrainian family.

She was contacted by Nadiia Dudko, a Ukrainian economist, who fled her country with her daughter Anastasia. Nadiia’s husband remains in Ukraine, helping to evacuate people.

The family are from the central city of Dnipro, which has seen Russian missile strikes and is regarded as a possible point for Russian forces moving from the south and east to join together.

“I’m just trying to help out,” said Preca. “I’m a mother and I’ve a daughter and so I said I would take females.”

Since then, she said she has received many text messages from other Ukrainians seeking refuge.

The Malta Hotels and Restaurants Association has a list of members that have registered to offer full-board accommodation, with some even extending the free stay beyond the quarantine period, its president, Tony Zahra said.

To date, these hotels have hosted some 30 Ukrainians that have fled the war, he estimated.

On landing from Bratislava on Wednesday, after a week-long evacuation through Slovakia, the mother and daughter waited at the airport in Malta for four hours to be told they could not go to their pre-arranged accommodation, Preca said.

Coming from a ‘dark red’ country, the pair must quarantine for two weeks and Preca set them up in a hotel that would cater for all their needs.

Instead, they were sent to a four-star boutique hotel in St Julian’s, and “locked in a room without food”, where they even had to buy their own water on arrival. 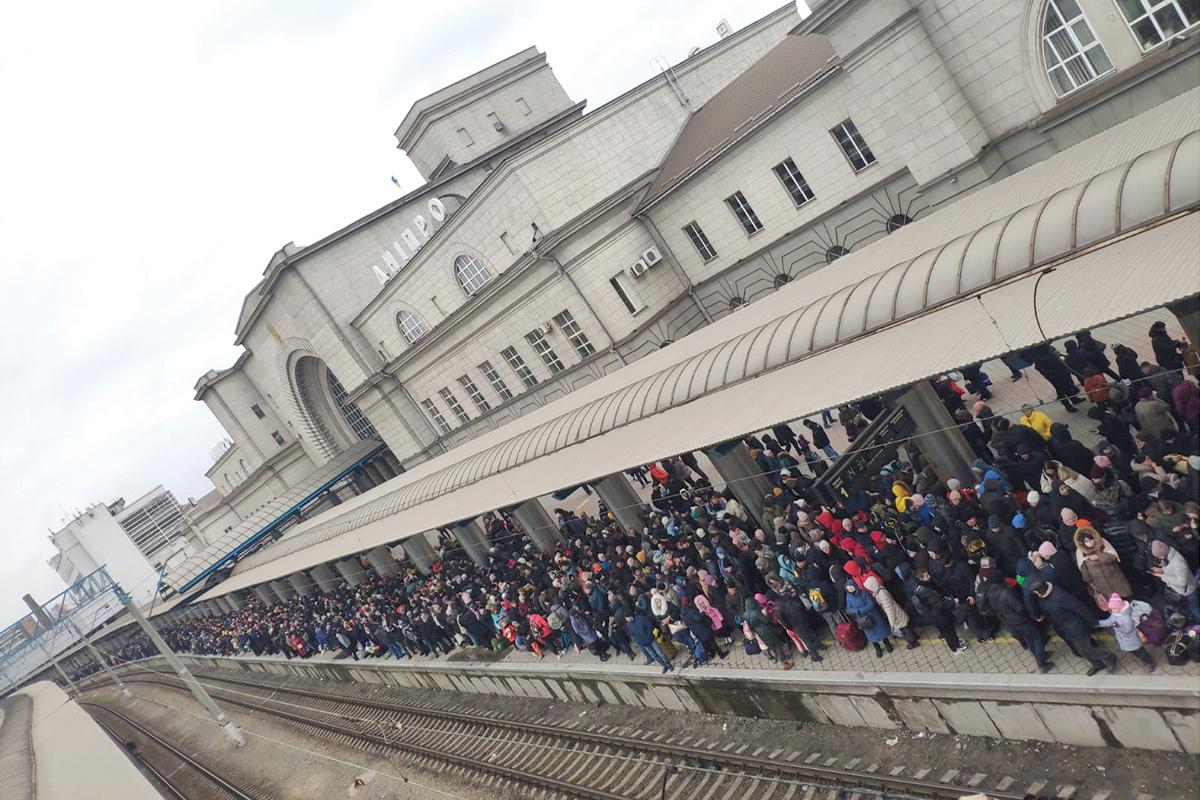 Long queues at the train station in Dnipro, Ukraine, as Nadiia and her daughter left for refuge in Malta.

Communication has been difficult because the mother-and-daughter do not speak English and conversations are based on Google Translate but Preca was able to understand what the family needed on their arrival at the hotel, providing a hot meal, toiletries and other basic necessities.

She also organised for family and friends to help out with the meals during their stay but that will no longer be necessary from tomorrow, when she will take them to their new accommodation.

“My concern now is that others are being sent to a hotel that does not offer any hot meals when the MHRA has a list of hotels that do,” she said.

Preca, who does not even know from what part of Ukraine the mother, an economist, and daughter come from, intends to host them in her house when the quarantine period is over.

But her plan is to help them settle in Malta, find their own flat, a job and schooling for the child.

“I would like her to eventually start to rebuild a life here,” she said, encouraging others to open their homes by signing up because “this is an emergency and we are one people”.

Malta’s humanitarian response to people arriving from Ukraine has lacked clarity from the start. After first saying the quarantine fee for Ukrainians would be waived, the Malta Tourism Authority rowed back, leaving hoteliers to have to step in and offer the free stays.

After Health Minister Chris Fearne skirted the issue, Foreign Minister Evarist Bartolo said his ministry could cover such fees but did not provide any additional details on how this would work.

One young girl with cancer was arrived this week for treatment.

In a statement on Friday, the Malta Tourism Authority said people from Ukraine arriving in Malta are being provided with free accommodation on a bed and breakfast basis.

It is being paid for through a humanitarian fund set up by the Ministry for Foreign and European Affairs and administred by the MTA.

"Moreover, the MTA is then also stepping in to assist Ukrainian refugees who would not be able to afford anything that would be covered through the mentioned Humanitarian Fund," it said.

This includes clothing, toileteries, or basic necessities such as food and drink.

It said it was supporting an initiative by EF language school, whereby it is teaching basic English to people coming from Ukraine through an online course.

Anyone interested in hosting Ukrainian refugees can sign up on one of these websites: https://www.shelter4ua.com/ua or https://www.eu4ua.org/en