A kiosk in Sliema that was forced to reduce its “takeover” of the promenade and remove illegal structures a year ago has extended its footprint.

It now operates a full-blown catering area and is applying for sanctioning to evade enforcement.

Objectors to the sanctioning application claim it is “yet another step in the incremental takeover” of the Sliema-Gżira promenade.

What was once a kiosk is now an extensive dining area, said lawyer Claire Bonello, who has been fighting the case.

When someone breaches planning laws, enforcement does not stop them but gets them to file an application to sanction the infringements instead- Lawyer Claire Bonello

She noticed planters being “stretched out at will” beyond the tiled area, effectively increasing the catering operation.

The kiosk, owned by Anthony Catania, is being used as a restaurant called Trattoria del Mare despite having no catering licence and being “expressly forbidden by policy”, she said, maintaining the application should be rejected outright on these grounds alone.

No action from Planning Authority

Bonello, a legal representative on many planning cases, pointed out that the development continued to obstruct free pedestrian flow, blocked views, gave rise to noise pollution and caused cluttering of the promenade.

Its reliance on a portable toilet, further blocking the seafront, and a storage van stationed in a no-parking area at all hours of the day and night were also highlighted. 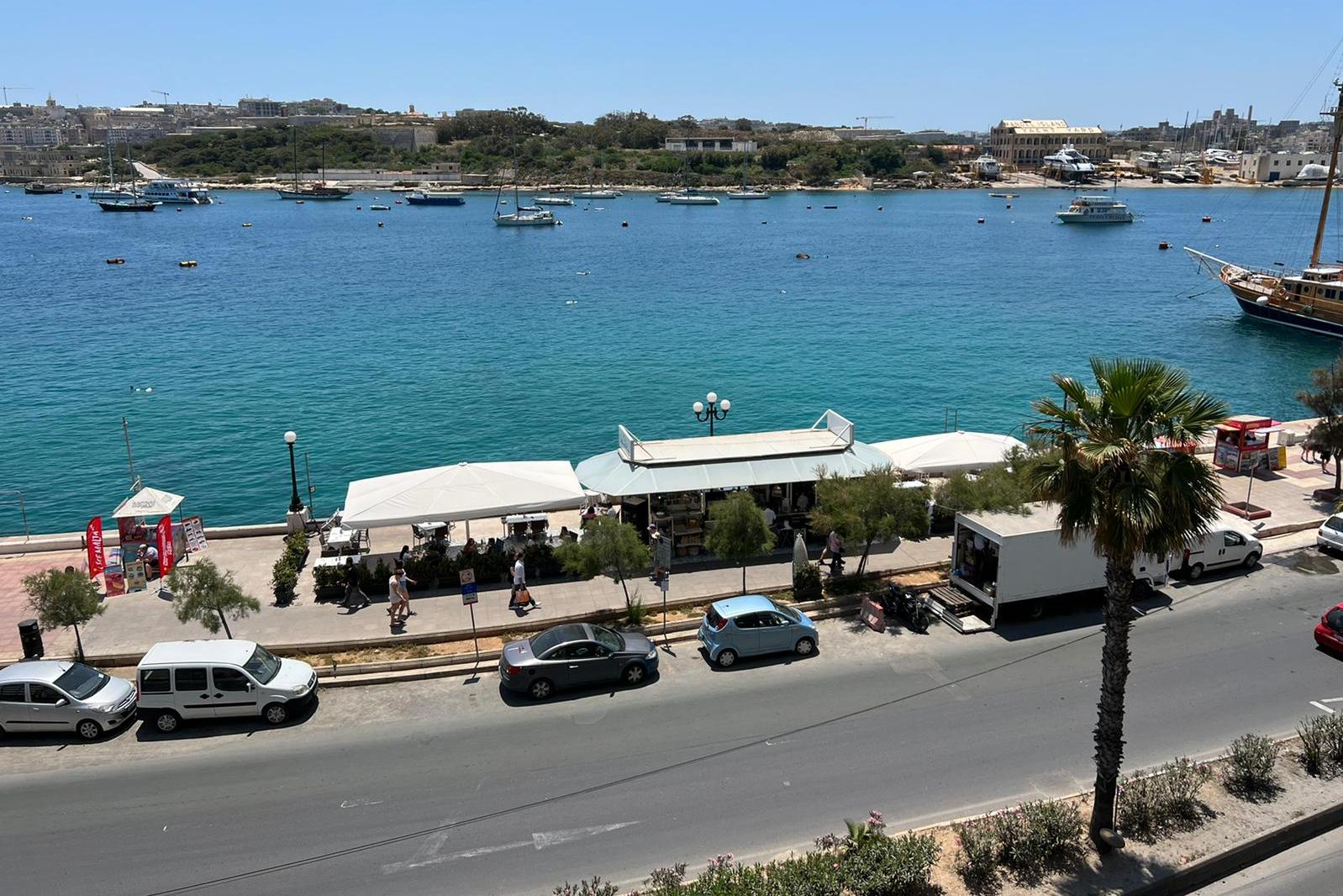 The view of the kiosk from above, with a storage truck parked in front of it.

“Calls for enforcement to the Planning Authority and other entities have not resulted in any action but only in this sanctioning application,” Bonello said.

The application, PA 1337/22, is to authorise alterations – including the laying of floor tiles – to the outdoor catering area approved in PA 7319/18, another application for a change in design of the already approved kiosk. 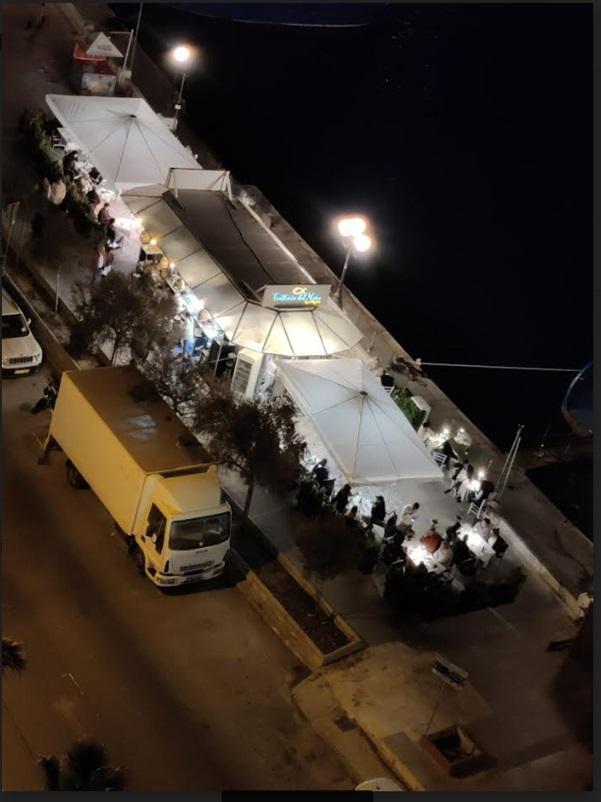 The kiosk has become an extensive catering area.

A year ago, Times of Malta reported that the kiosk’s non-compliant permanent roofed enclosure, eating into the promenade and obstructing views, was removed by the developer following public outrage over the eyesore, the ‘theft’ of the land and the lack of enforcement.

The pavement was consequently freed up, as demanded by an online petition. But the application for sanctioning has now raised questions about the PA’s inaction when planning law and conditions are contravened.

“This is utter lawlessness,” Bonello insisted.

“When someone breaches planning laws, enforcement does not stop them but gets them to file an application to sanction the infringements instead.”

In a detailed objection on behalf of her client, she claimed the application in itself gave insufficient and incorrect information, pointing out that the previous permit never approved an outside catering area as stated in the description.

The application and notices were also hidden, said Bonello, who managed to get the Ombudsman to weigh in and have the consultation period re-opened until June 17.

The sanctioning application should be rejected on the basis of several breached policies, listed in the objection, and enforcement action should be taken, she held.

The kiosk went against local plan policies, causing the loss of pedestrian spaces along the waterfront, rather than establishing those spaces as required.

The “encumbrance and extension” of the site by the outside catering area was in breach of a policy on Walkways/Heritage Trails/Cycle Routes, which stated that the promenade from St George’s Bay to Pietà would be protected and upgraded.

According to the Policy, Guidance and Standards for Outdoor Catering Areas on Public Open Space, OCAs that were “contiguous and related to kiosks shall be expressly prohibited”, Bonello noted.

The outdoor catering area could not be used for storage purposes, while furniture had to be stored inside the premises outside trading hours and could not be stacked outside; all breaches that had been captured in photographs. 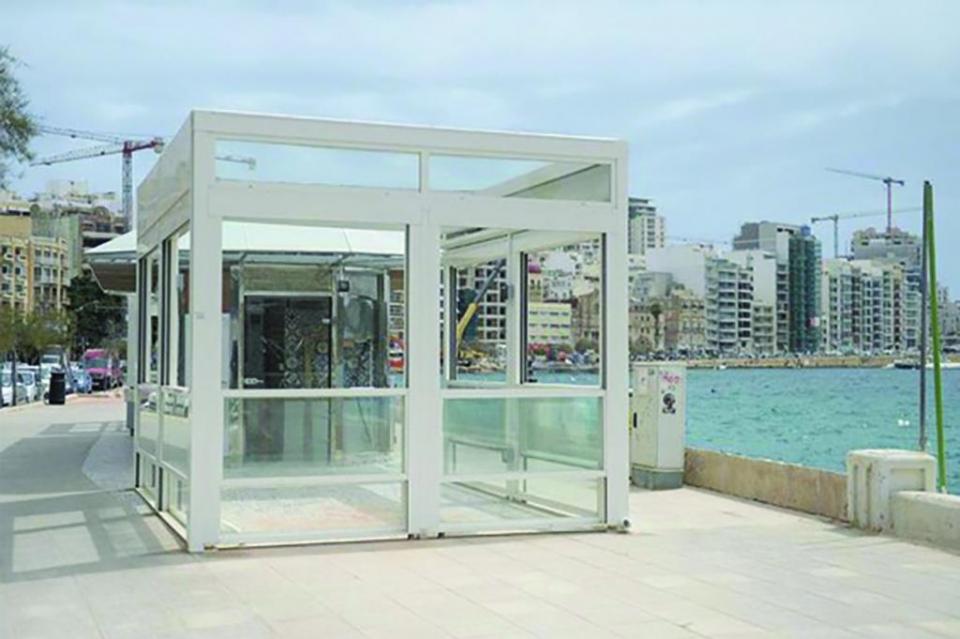 The original glass and aluminium enclosure that was removed, following public outrage.

The application was also in clear breach of the Development Control Guidance Kiosks 1994, which stated that these had to leave enough space not to obstruct pedestrian flow, block sea views and visually dominate their surroundings.

The Sliema local council and environment NGO Flimkien għal Ambjent Aħjar had also entered the fray last year, objecting to the encroachment of the promenade and questioning the system of sanctioning illegalities, geared to encourage infringements of permits.

FAA’s Astrid Vella calculated the latest “abusive” extension to the dining areas brought the site up to 186 square metres – more than twice the size of the 85 square metres being applied for sanctioning.

The plan submitted included “gross discrepancies”, showing the remaining public promenade to be twice as wide as it actually is, as well as a free passage on the seaward side, when it is now blocked by tables, Vella pointed out.

The restaurant has even occupied the seawall with seating, she noted.

Condemning the “barefaced abuse", FAA continued to call for the illegalities to be removed so the public promenade would be returned to the public – “its rightful owner”.

The “land grab” issue has long been raised, particularly in areas like the Sliema seafront, with a new cage-like structure on The Strand causing a backlash from the local council, business owners and residents.

Obstructing outdoor seating, sprawling into public spaces, and illegal platforms outside restaurants were the order of the day, they contended.