“Please do not allow your island to be abused. Please do your checks, see which Russians are using Malta to hide”, Zelensky urged legislators.

He urged the EU to embargo Russian oil and oil products and acknowledged the sensitivity of that topic, noting that "Maltese-flagged vessels are used to transport Russian oil.”

He warned that each euro earned from shipping Russian oil would be offset by losses from rising food prices and migration pressures caused by the war.

The Ukrainian president reminded Malta's MPs how Malta had fought for its future and the future of Europe during World War II, much like Ukraine is doing now.

“The resilience of the Maltese people defined the future of the Mediterranean. Malta stood against the severe siege and bombardment, together with allies in the anti-Hitler coalition,” Zelensky said.

He said Ukraine also needed weapons and support to “destroy the ambitions of the current aggressor, accusing Russia of targeting civilians in Ukraine.

He said Russian forces were blocking access to water and food supplies in certain cities.

Zelensky made a particular mention of Malta's golden passport scheme being used by Russians.

Zelensky also hit back at introductory remarks by speaker Anġlu Farrugia, who in his opening remarks referred to the war as a “conflict”.

“We do not have a conflict, we have a war going on," Zelensky said. "Words are not speaking these days, but shelling, torturing and killing. It was Russia who came to our territory, and they are killing us.

“We are doing our best to protect our land and our people. We are doing all it takes to bring peace to our Ukrainian land”.

Zelensky was addressing Malta's parliament in his latest appeal for support, as his country resists an invasion from Russia.

His virtual address followed introductory remarks from Speaker Farrugia, who urged Ukraine and Russia to engage in dialogue.

Abela: Maltese are by your side

Prime Minister Robert Abela told the Ukrainian president that while Malta was neutral and non-aligned, "this does not mean that we are silent, blind and deaf to your suffering".

"We will speak where and when it matters, within international fora and the European Union," Abela said, telling Zelensky that the Maltese people "are by your side". 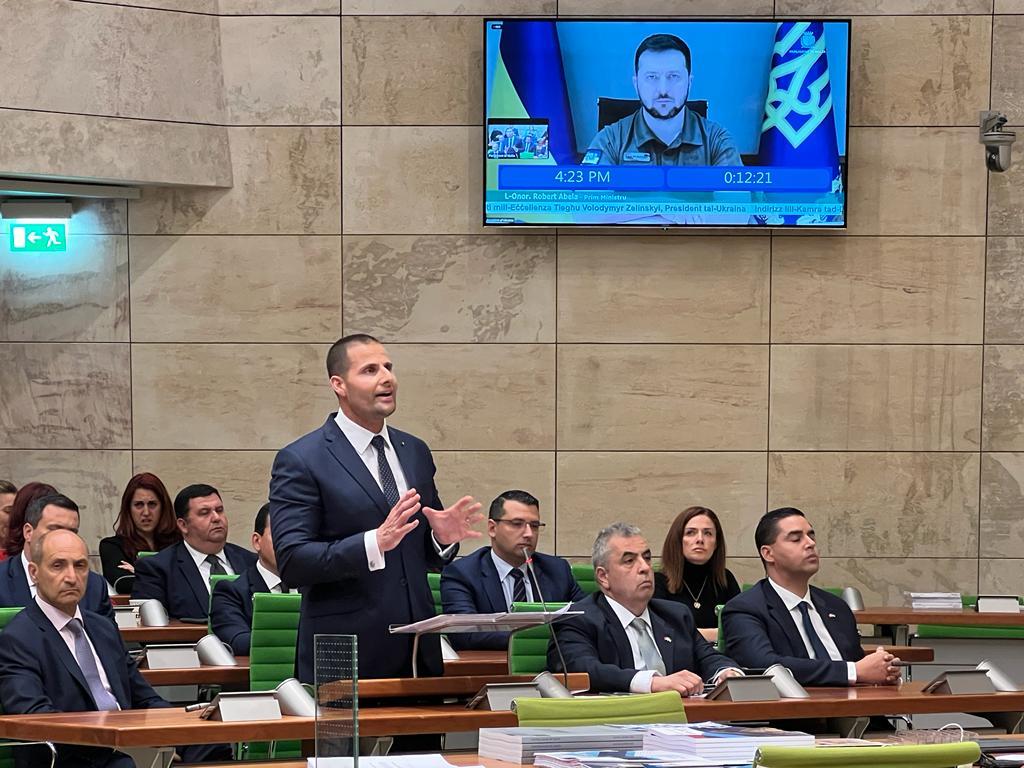 Robert Abela told Ukraine that Malta was 'by its side'. Photo: Chris Sant Fournier

Malta would advocate for peace and an immediate ceasefire, he said, doing so through "actions and words". He pledged non-lethal equipment and medical supplies.

On golden passports, Abela said Malta had frozen applications from Russian and Belarussian passport buyers, and revoked the citizenship of a Russian individual who was impacted by sanctions.

“You are not alone, Malta stands with Ukraine,” Abela assured.

Grech: Our heart goes out to you

“Malta is the smallest EU member state, but despite our small size, we stood our ground against Nazism and fascism with success. Which is why the George cross still embellishes the national flag," he said. 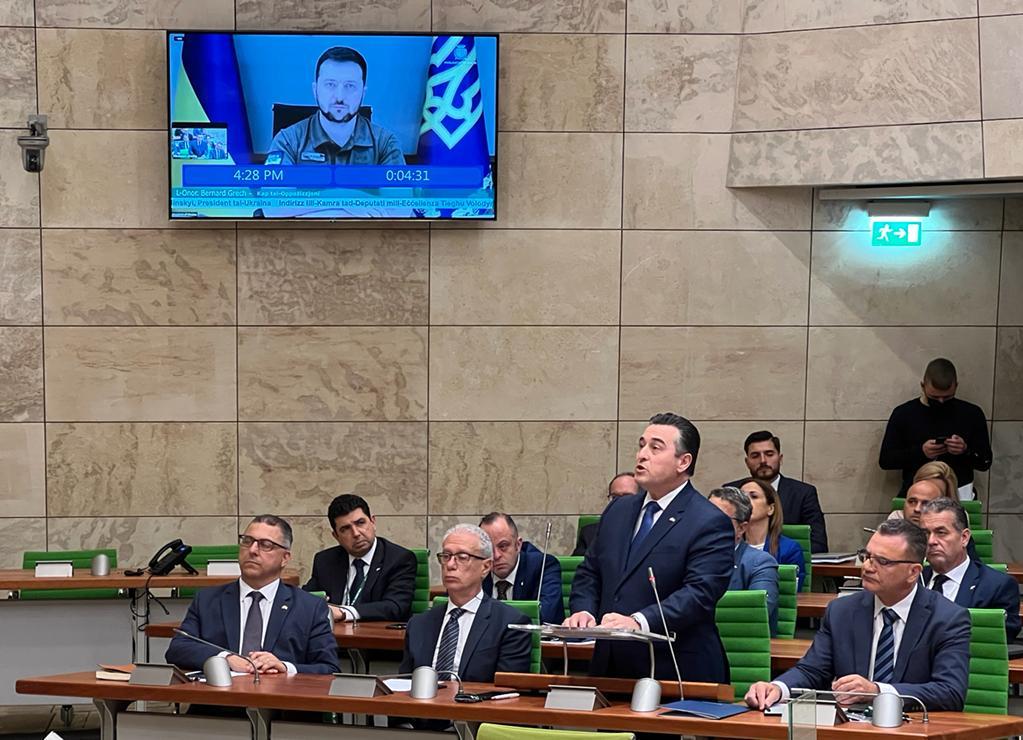 Like Abela, Grech made it clear that Malta would not be providing weapons or military equipment to Ukraine and was too small to give the country any substantial aid.

"But we have a heart that reaches out to you”, he said.

Grech made it clear that his party backed Ukraine's bid to join the EU.

The invitation to Ukraine's president was extended by Foreign Affairs Minister Ian Borg during a phone call Borg had with his Ukrainian counterpart Dmytro Kuleba.

Zelensky has made speeches to the parliaments of many countries since Russia invaded Ukraine on February 24.

His address to Maltese politicians comes amid EU discussions on whether to agree to an embargo on Russian oil, with Hungary so far holding up the plan.

Malta has also raised concerns about another EU proposal to ban the transportation of Russian oil on EU-flagged or controlled ships.

The speech took place a day after Russian President Vladimir Putin said in a Victory Day speech that he had no choice but to send troops to Ukraine following an "absolutely unacceptable threat".

Zelensky responded on Monday, saying he would not allow the Soviet Union's victory over the Nazis to be "appropriated" by Putin.