Migrants and their lobby groups gathered in Valletta on Monday to protest policies that they say strip them and their children of basic rights, pushing them to exploitation.

The demonstration took place one week after an injured migrant was abandoned on the roadside after falling two storeys from a construction site.

Drumming sounded through the capital as around 100 protesters held placards reading 'stability not uncertainty', 'the rights of our children should be protected', and 'we are humans not cheap labour'.

They marched from parliament to the home affairs ministry and delivered a letter outlining their concerns to minister Byron Camilleri, whose staff received it from under a locked glass door.

At the centre of their concerns are two recent policies, which they say prevent many from finding work legally, and make their children’s, and their own access to basic services, like school and healthcare, unstable.

They also held up photos of the injured migrant Lamin Jaiteh, saying 'silence is compliance. How many more?’.

The injured migrant, who was working without a permit, was dumped on the side of the road.  Glen Farrugia, a contractor, has been charged with grievous bodily harm. 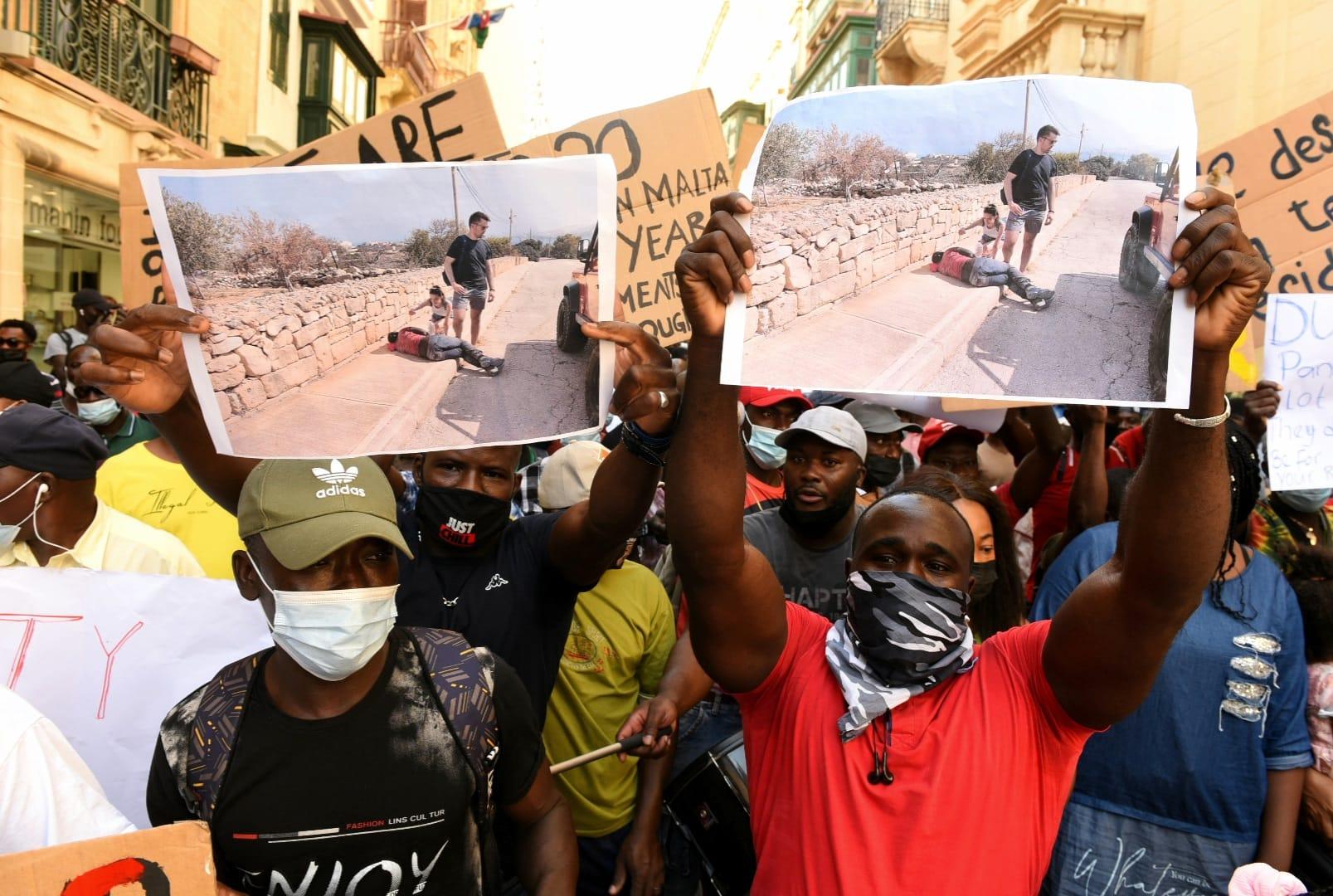 Protesters hold up photos of Jaiteh Lamin lying on the side of the road. Photo: Chris Sant Fournier

What are protesters demanding?

Protesters marching in Valletta had a list of specific demands:

Many of those protesting noted the damage that revisions to the Specific Residence Authority policy, introduced last year, had done.  They said the changes have led to many migrants living in Malta for years, suddenly becoming undocumented.

A ‘safe countries’ policy introduced in May this year now has also stripped the right of asylum seekers - who come from a list of countries considered safe by the state - to work legally.

During the protest, migrants urged the government to ‘give back the documents it had recently taken off migrants,’ and to ‘grant a stable future to their children.’

The SRA status introduced in 2018 allows failed asylum seekers and holders of temporary humanitarian protection N (THPN) who have lived and worked in Malta for a number of years to get access to basic rights through documentation.

However, revisions to the policy last year changed the policy to be less family-oriented. Both parents now need SRA status to pass it on to their children, resulting in many children becoming undocumented. 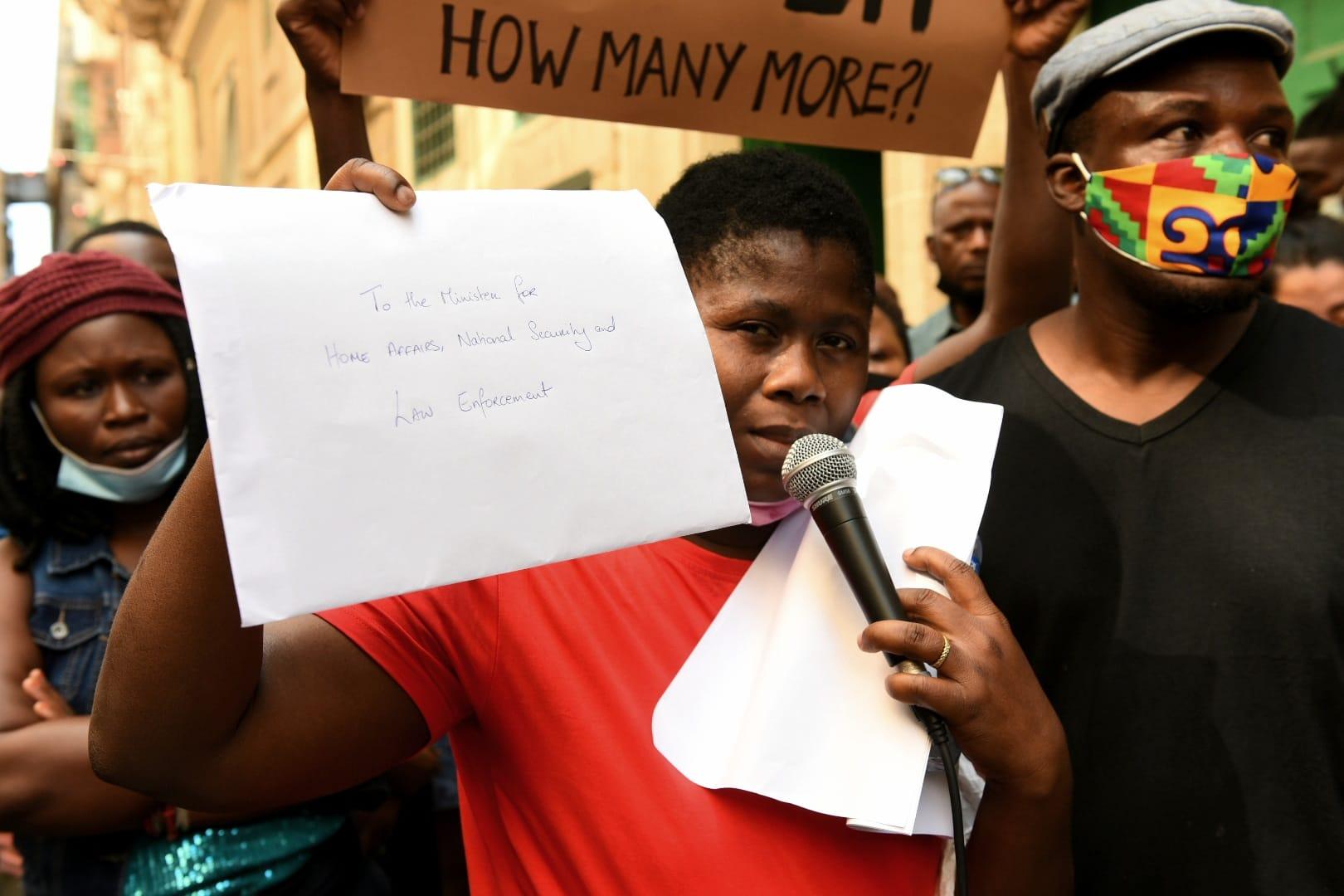 Protesters also complained of state agency Identity Malta, which they said is deliberately making it difficult for migrants to renew their SRA permit, with families queuing overnight  and still not getting in.

“You can go three or four times, get in line and not get seen. Once you’re in there you feel as the staff get a medal each time someone loses their status,” Doris Doku, a Ghanaian said.

Doku explained they found every excuse not to renew someone’s permit in time -  a different coloured pen used by the landlord and the migrant, a missing photocopy which they could easily make themselves in the office.

'We lost everything because of this'

Joy Edokpolor, a Nigerian, also said that despite waiting in a queue in the rain with her son and husband in the early hours of the morning three times, when she finally was seen to, her permit had expired by five days.

“We lost everything because of this, I was pleading and crying with the staff there to allow us to submit our application anyway. We had everything, but couldn’t get in because of the queues,” she said.

Apart from rendering them unemployable, the loss of SRA status deprived migrants and their children of the right to open a bank account, travel, the right to access healthcare, and education.

While they are paying taxes, they and their children can gain access to school and healthcare, but if they lose their job due to illness for example, they lose these rights immediately.

“If a person suddenly gets sick and has to stop working, even if they have been paying taxes for years they find themselves alone,” Doku said.

She explained it was creating a lot of anger and mental health problems in the community.

Ahmed Karim Abdul, from Togo, also said there was no justice to the Maltese authorities taking taxes of them for years, but then not allowing them fundamental rights.

“A lot of us like me do the domestic work in Malta, work very hard, pay a lot of taxes for many many years and so there is no reason we should not be able to travel, and gain benefits,” he said.