This is the second article in a series about using actuarial techniques to understand the coronavirus pandemic in Malta. Read part 1 about Markov chains.

Malta reported its first coronavirus cases on March 7. As of March 22, there are 90 known cases. That means we are in day 16 of the outbreak and the average growth rate in cumulative growth to date has been 25.56% daily.

Sunday marks the highest increase from an absolute perspective (17 new cases), but not in percentage terms (23.29% is lower than the median).

In this article in a series explaining mathematical or actuarial techniques, I introduce development factors and why many medical professionals are telling us that the worst is not over yet.

In the first article of this series, published on March 17, I had predicted a median of 180 cases by Monday 23rd. But this best-estimate scenario came with a range of 88 to 365, showing the level of uncertainty within the results.

It is important to note that these analyses are back-of-the-envelope ones. There is a lack of in-depth data used, so precision is not the key aspect here.

The key unknowns are the number of carriers, the number of swabs to date and how the virus will spread once the weather improves. The aim of this article is to introduce the concept, not be specific.

As China and other Asian countries appear to have started to contain the virus, the key question is whether Malta will reach the peaks seen elsewhere and if so, when that will happen.

Looking at China’s cumulative number of reported cases, one can note that the rate of growth lowered after the 45th day.

Look at the second graph, below. Note that the graph looks like an S - this curve is called a logistic curve. What most tend to do is fit a curve to an expectation.

You might remember learning about functions during mathematics lessons at school. This is an example of how they are useful. If you recall that y=mx+c, it is essentially what most economic analysis is all about.

Most other European countries are still in their first 50 days of the pandemic. This might be why they have not experienced a decline at such a rate. Or maybe their measures to contain the virus' spread were not adequate and the rapid decline in China was due to that country's stringent measures. 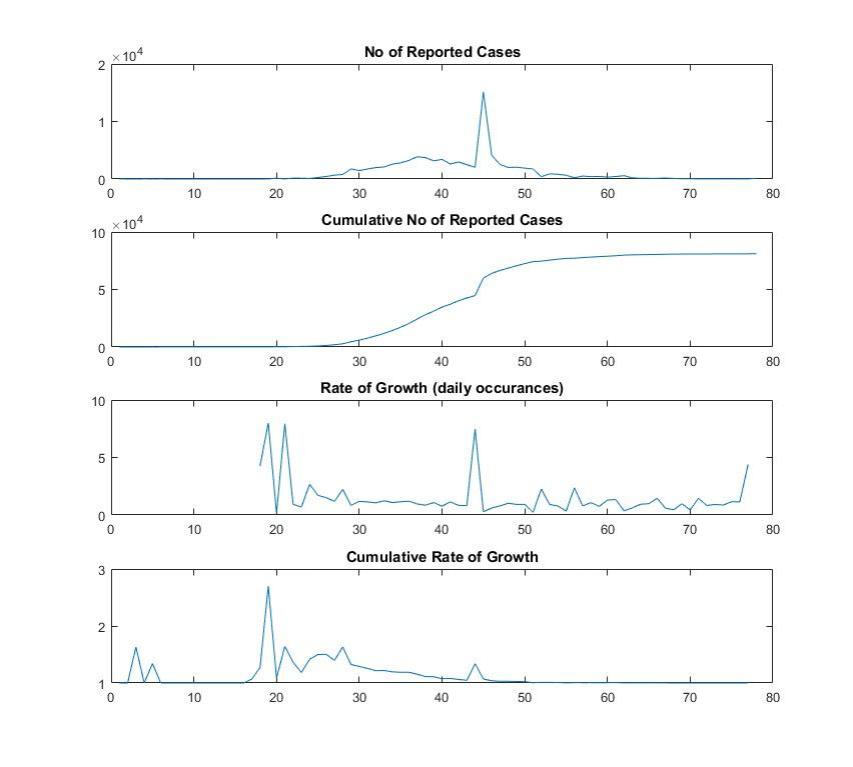 However, it seems that Italy and Spain were complacent for the first 15-20 days of spread. During the first few days, there was no rate of growth. Italy, for example, had its first three cases in late January but no further new cases before the third week of February.

Looking at five-day averages provides a different perspective. Cases in Italy increased by an average of 88% per day between days 1 and 20. The highest rate of growth over a five day period for China was also in that period (51% daily growth) while Spain experienced the highest rate in the day 20 - day 25 period (57% daily growth compared to 43% daily growth for days 15 to 20).

If one excludes the initial period of complacency in Italy and Spain (when the number of reported cases was stagnant), the rate of growth is actually hovering at over 40% per day, although recent five-day averages are becoming lower.

The fact that our rate is lower suggests that the actions taken by local authorities have had an effect.

It is impossible to say with any certainty whether enough has been done or more is needed. But we can try to see how the Maltese experience may develop.
We can do this by drawing on tools used in the insurance sector.

In non-life insurance, we tend to use development factors to show how claims develop over a period of time, and use this to project for years for which most claims have been incurred but not reported (IBNR) yet.

In the COVID-19 scenario, there are a number of carriers, but we do not know about them. We can compare this with claims that are incurred but not reported.

In China, 5% of cases required intensive hospital treatment, though this rate can rise to above 10%, possibly due to different age distributions.

Using the middle value, 7.5%, means that we would have over 350 ICU cases by April 7 if we follow the Spanish experience, or around 250 ICU cases if we continue at the same rate of growth.

If one projects a 2% fatality rate like medical professor Victor Grech, an experience like Spain's would lead to a hundred deaths by Easter. That should sound the alarm bells.

Singapore is included in the comparison chart due to its small size and interesting measures to limit the spread of the virus.

Yet despite the good early results, Singapore has just experienced its first two deaths.

Given the wide range of possible results Malta might experience, it becomes easier to understand why nobody has been keen to try and predict the number of cases Malta might face.

I would expect to have somewhere between the Singaporean and the average experience until the end of March, but anything less than 200 total cases would be an overly optimistic result.

The projections here are clear on some aspects: the Italian experience is incomparable,  but Spain’s rate after day 25 is actually even worse. What is certain for Malta - it should brace itself.