Fifty people tested positive for COVID-19 between Sunday and Monday, while another 32 patients recovered.

Two further patients died, increasing the total death toll to 23, with eight deaths in the past eight days. 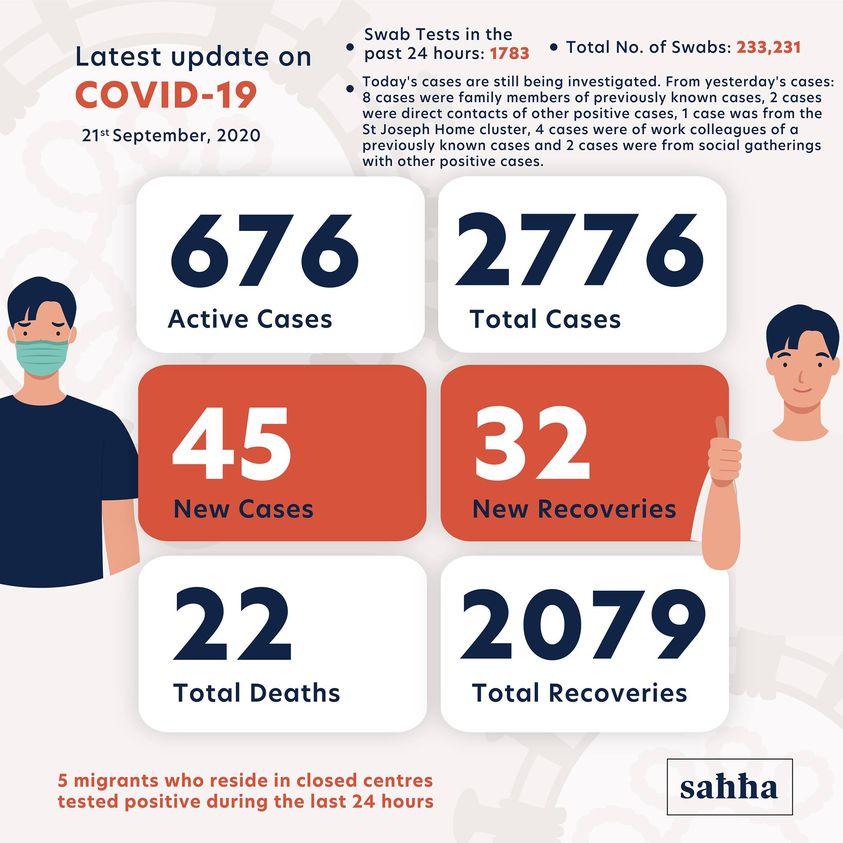 Five of the positive cases were diagnosed in closed centres. Migrants are automatically kept in quarantine upon their disembarkation, and Malta does not include migrant positive cases in its official data, following approval from the European Centre for Disease Control.

A total of 1,783 swab tests were administered between Sunday and Monday, bringing up the total number of tests taken since the pandemic reached our shores to 233,231.

According to the European Centre for Disease Control, Malta currently has the fifth-highest rate of COVID-19 cases per 100,000 people in Europe. The ECDC calculates case rates on a 14-day period.

The number of deaths of COVID-19 patients increased to 23 on Monday, after a 98-year-old man and an 83-year-old man died. Both had underlying health conditions, authorities said.

The health ministry said the 98-year-old patient, who resided at a home for the elderly, tested positive on September 6 and was transferred to Mater Dei Hospital.

The 83-year-old, whose death was announced later on Monday afternoon, tested positive upon admission to Mater Dei Hospital on September 16.

Monday's two deaths mean eight COVID-19 patients have died in as many days. Three people died on Saturday and an 86-year-old patient died on Sunday at a home for the elderly.

As of Monday, 38 coronavirus patients were receiving treatment in hospitals. Of those, four are in intensive care while another nine are at Mater Dei's infectious diseases unit.

Other patients include 11 at Boffa Hospital, 8 at St Thomas Hospital, one at Mount Carmel Hospital and five within other wards of Mater Dei Hospital.

The increase in the number of infected elderly over the past days has drawn concern from the authorities and the public, and on Monday Archbishop Charles Scicluna too urged people to adhere to the health authorities’ directives and care for each other.

While Monday's cases are still being investigated, out of Sunday's 32 coronavirus cases, eight were family members of previously known cases and four were traced to the place of work.

Two were direct contacts of other positive cases and another two were traced to social gatherings.

One case was detected at the St Joseph's home for the elderly.