A whopping 93 per cent of young people believe the state of Malta’s environment is getting worse, a study by EY has found, with overdevelopment cited as the country’s biggest challenge.

The previous study, carried out in 2021, had already found that 9 out of 10 young people believed Malta’s environment is getting worse.

The uptick in the latest study suggests more youths are now worried about the environment and its deteriorating state.

This result went up six percentage points over the previous year. 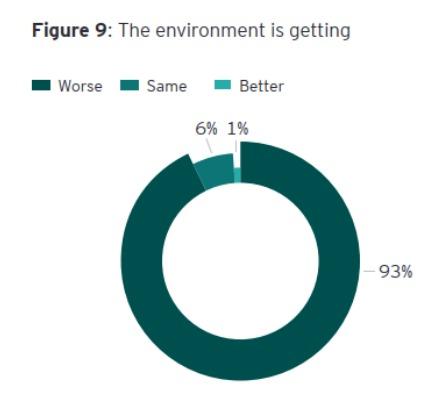 While overdevelopment is deemed the biggest challenge by both age groups, millennials are more worried than their younger peers.

While 78 per cent of millennials said overdevelopment is Malta’s biggest challenge, the figure dropped to 68 per cent for the Gen-Zs.

Some called for a complete halt of development, pausing controversial permits, and demolishing those already built on former ODZ space, while others identified a want for more aesthetic developments that fit the

traditional image of Malta and a refocusing on renovating long abandoned and decrepit buildings.

On the environment, in addition to green lungs and more trees to reduce the growing pollution that has been affecting the health of some respondents there is also a large desire for open green spaces within urban areas.

When asked what they considered to be Malta’s biggest challenge, 44 per cent cited the environment, 11 percentage points lower than last year.

Traffic is considered the biggest challenge for half of all respondents, with inflation following at 46 per cent.

While climate change is now at the forefront of the main agenda for most countries, it seems Malta’s young people are not as concerned about its impact.

According to the findings, just six per cent of respondents said this is a challenge, with the older cohort being even less worried than their younger counterparts. In the previous study, the figure stood at 20 per cent.

The 5th EY Generate Youth Survey gathered the views of over 700 youths in Malta. The survey was conducted between September 30 and October 31. 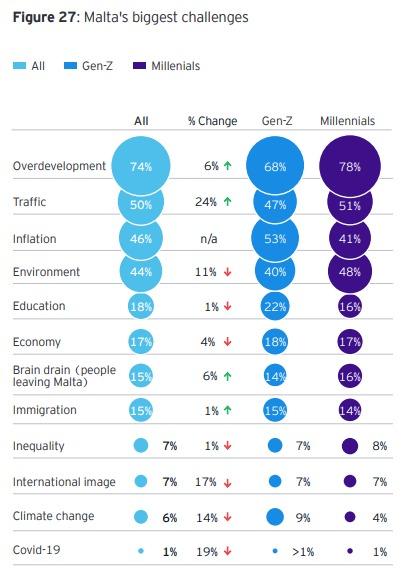