Women should not go to prison for having an abortion and the procedure should be permitted in three “specific and extraordinary” scenarios, ADPD- the Green Party has said.

In a resolution approved on Saturday morning, the party’s executive committee came out in favour of decriminalising abortion for any women involved, but said that medical professionals who assist in the procedure should still be subject to criminal charges.

The party’s position is three years in the making, with the taboo topic having rocked its antecedent groups AD and PD in previous years.  It becomes the second registered political party in Malta to be open to abortion in some circumstances, following the expressly pro-choice party Volt.

Saturday’s resolution was presented to the party’s executive committee by its chairperson, Carmel Cacopardo, some days after independent MP Marlene Farrugia presented a parliamentary proposal to decriminalise abortion.

Cacopardo has long said that the country should have a public discussion about the issue.

Malta has a blanket ban on abortion and according to local law, women who carry out an abortion face up to three years in prison while medical professionals who assist in the procedure can be jailed for up to four years.

Farrugia wants both those provisions struck off the Criminal Code. The Labour Party has said that the motion would “choke” debate and is keen to put the matter to a national consultation. The Nationalist Party has said it will “never” agree with decriminalising abortion.

ADPD said Maltese legislation on abortion “is not fit for purpose” and needed to be brought in line with medical and scientific progress “after more than 160 years. 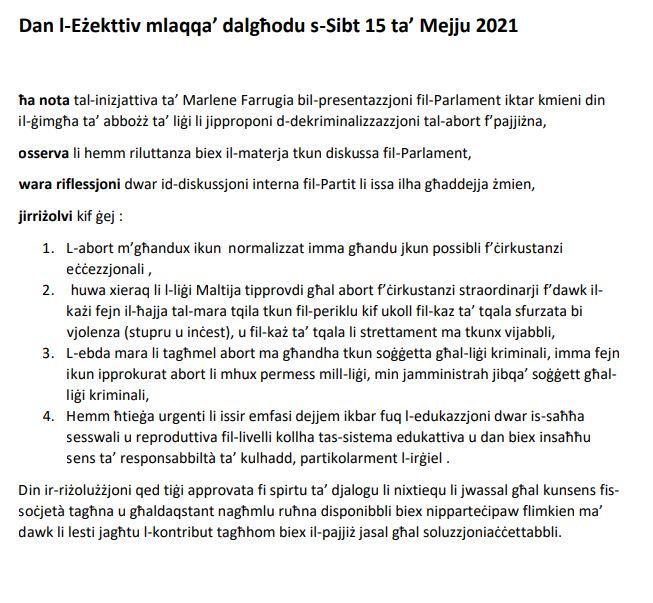 The ADPD resolution approved on Saturday.

Cacopardo told Times of Malta that the party believed women were always the victim in such situations and should not be made to pay a criminal price, under any circumstance.

The same could not be said of medical professionals, he said, arguing that removing the threat of punishment if they assisted in abortions would “normalise” the procedure and legalise it in all but name.

In its resolution, ADPD also noted the “urgent need” for greater emphasis on reproductive and sexual health education at all levels of schooling, adding that particular emphasis needed to placed on reinforce responsible behaviour in particular from males.

“The party is available and willing to participate in dialogue with civil society possibly to identify a consensual approach to the required reforms,” it said.

Cassola: no to abortion except when mother's life at risk

Independent candidate Arnold Cassola, a former AD chairperson who quit the party in 2019 after one of its candidates publicly called out politicians for refusing to discuss abortion, said on Saturday that he opposed abortion in all cases except when a mother's life was at risk.

He said Farrugia's decriminalisation proposal should be amended to require women found guilty of carrying out an abortion to do "work in the community" while medical professionals involved should have their professional warrant withdrawn.